As government roadblocks pile up for acequias in the burn scar, visions spring of a gran limpia

Those who rely on historic irrigation ditches in the burn scar of the biggest fire in state history continue to face government roadblocks as they try to get acequias flowing and life to return to the charred landscape.

The Federal Emergency Management Agency only recently verbally agreed to accept applications from local acequias for funding from its Public Assistance Program, which is reserved for public entities like local governments and tribes. It took months of back-and-forth to convince FEMA officials that acequias should be treated like any other public entity with by-laws, boundaries and rate-payers (known as parciantes), said Paula Garcia, director of the New Mexico Acequia Association.

And the state’s Department of Homeland Security and Emergency Management has denied every request from acequia leaders for assistance in the form of backhoes, laborers, diesel fuel or help with debris clean-up.

“This whole bureaucracy is for the birds,” Garcia said as she hopped into her pickup truck for a tour of acequia damage in mid-September.

There are about 75 acequias in the burn scar of the Hermits Peak-Calf Canyon Fire. The irrigation ditches have existed for more than 200 years, nourishing homes and farms north of Las Vegas, N.M. They also channel rainwater, which can help lessen flood damage during monsoon season.

The 341,000-acre fire has been 100% contained since mid-August, but huge swathes burned at high intensity and blackened soil. These areas are highly prone to flooding, and many are adjacent to the acequias that carve through the landscape.

There have been 60 flash floods or debris flows in San Miguel and Mora Counties since May 1, according to reports compiled by the National Weather Service. The floods washed out roads, stranded motorists and destroyed homes. At least three people drowned in flash floods in the burn scar, as well.

On Sept. 13, Carlos Arellano, the mayordomo of the 2-mile Acequia Madre de Holman, stood on top of the irrigation ditch he oversees. The trench, normally 3-feet deep, was completely full of silt. It resembled a hiking path running along N.M. 518 northeast of Mora.

Recently, the state Department of Transportation placed cement barriers in front of a home alongside the highway to ensure floodwaters were diverted away from the structure, which sent more debris and silt into Arellano’s acequia. It was a short-sighted solution, he said, typical of the way the many state and federal agencies have responded to the crisis.

He and about 40 other mayordomos, with Garcia’s help, applied for FEMA aid and were still waiting on word as of this week. He also sought help from the state for what he said were small but necessary costs: Diesel fuel for a backhoe he can borrow from another acequia, plus some money to pay a guy to run it.

“That’s all we really need,” he said.

The state DHSEM did not respond to calls or an email seeking comment Wednesday.

Local governments are able to file what are called “213 resource request” forms to get state aid with debris removal and other short-term needs. Garcia shared one from July for a 3-mile acequia near Mora seeking a hand crew and a backhoe, also denied.

Recently, the association convinced the County of Mora to submit requests on behalf of acequias to the state, to see if that worked instead. Those were also denied, Garcia said. The reason? Mora County doesn’t oversee acequias.

“The first reason was that they had to be submitted by a certified emergency manager from a county. And we thought, ‘Well, that’s no problem,’” Garcia said. “So he went to the county. But then when we submitted through the county, (DHSEM) said they’re not county-owned infrastructure. So, you can’t do that either.” 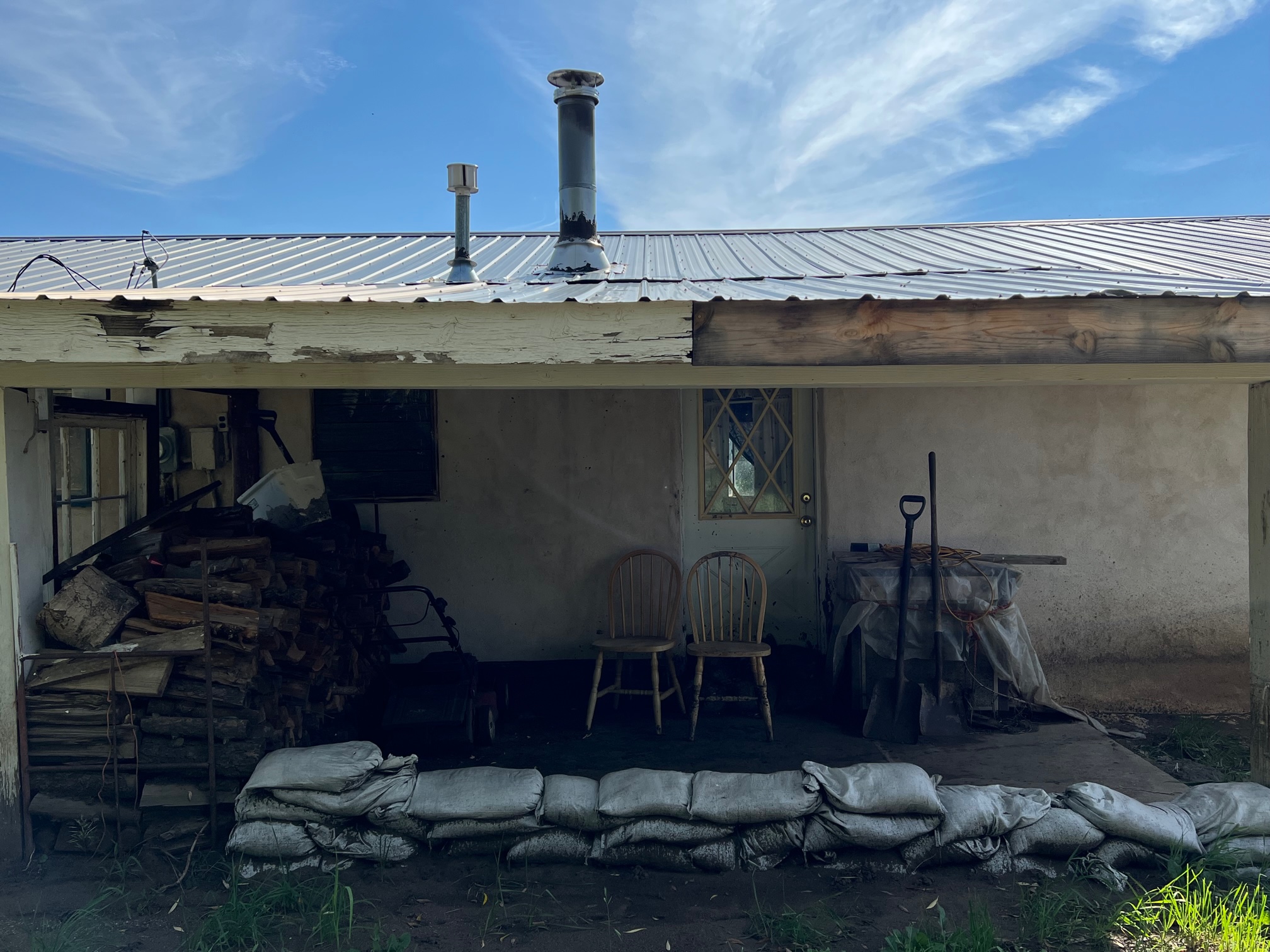 Recent monsoon rains flooded this patio along an acequia in the burn scar. A $133 million federal program can be used to prevent more damage but not to repair the acequia. (Photo by Patrick Lohmann / Source NM)

The state Department of Finance and Administration just announced $133 million in federal money to be spent on “imminent threats to life and property” from natural disasters, including removing debris from stream channels and culverts.

But that money isn’t going to help acequias, Garcia said, at least not directly, because the debris clogging them doesn’t pose an immediate risk to people or structures.

The acequia is full of silt, and it ruptured above a home, sending floodwater over sandbags into a back patio. The federal money can be spent to build a Gabion basket along the broken acequia to catch debris, because the rupture poses an imminent threat to the home.

But it cannot be spent to clear debris from or shore up the acequia, a fix that would remove any threat to the home and also safely channel some floodwater.

“See? That’s how these programs are so fragmented,” Garcia said. “There’s nothing comprehensive that’s like, ‘We’re going to come in and fix this systemic problem for you.’ It’s just Band-Aids.”

At least 10 acequias have applied for the program, Garcia said, but haven’t heard back.

After fire and flood, ash chokes acequias in northern NM

Garcia’s efforts at shaking down state and federal money come as the organization runs on fumes. It is dipping into its reserves to pay for damage assessments throughout the burn scar, plus completing a mapping project of acequias in the area.

Some acequias were flooded before they could be mapped, she said, which complicates efforts. The vast majority of acequias have suffered flood or fire damage, she said.

In the absence of federal or state help, she is wondering if she can muster a huge community effort instead.

Each spring in a normal year, volunteers gather for a limpia, a celebratory clearing of debris from local acequias. It’s normally a day-long effort with help from a dozen-or-so folks, laborers known as peones, who live along or near the ditch.

But to tackle the burn scar acequia damage, she’ll need far more than that for such a gran limpia. The plans so far are vague and no date has been set.

But she pictures the mobilization of three groups of volunteers to form hand crews. They’d at least be able to get up into the canyons and dense forest where backhoes, should they ever arrive, can’t reach.

“One (group) is the peones of the acequia, because every acequia has peones, and they’re usually the most able-bodied and strongest men in the village,” she

The second would be a veteran’s group of volunteers, known as Team Rubicon, which is on site in northern New Mexico but helping with other fire cleanup.

And the third would be a group she would call “Labradores (laborers) de San Isidro.” San Isidro is the patron saint of farmers.

“We would just put out a call for peones and create a schedule,” she said.

Much is still left to be worked out, she said, and the association and mayordomos will have to coordinate which group would come first. But she said it might become necessary, as winter looms and federal or state help doesn’t arrive, to see how many neighbors will pick up a shovel and dig out a ditch.

Even if the volunteers show up, the task ahead is daunting.

“The scope of the damage is so huge. It’s not like cleaning out in the spring,” she said. “It’s going to be a really big undertaking, reopening these acequias.”

At This Recovery Center, Police Cope With the Mental Health Costs of the Job