The record number of people who have died in San Diego’s jails and the efforts to prevent more deaths emerged as a main topic at a forum this week involving two candidates vying to be the county’s next sheriff.

Candidates Kelly Martinez and John Hemmerling also talked about de-escalation and several other topics during a 90-minute event hosted by The San Diego Union-Tribune Editorial Board at the San Diego Central Library.

Kelly Martinez is the county’s undersheriff and has been with the department since 1985. Hemmerling is former chief of the San Diego City Attorney’s criminal prosecutions unit, a former San Diego police officer and a retired Marine colonel who served in active duty and the reserves.

Nineteen people have died in jail custody so far this year, including a longtime and long-ailing person who died shortly after a compassionate release from custody. That number matches the record-high number of deaths in 2021.

The state auditor looked into the high death rates, and earlier this year released a report that was highly critical of the department and offered several recommendations.

Paloma Serna, mother of Elisa Serna, asks a questions during a sheriff candidate forum hosted by The San Diego Union-Tribune Opinion at the San Diego Central Library on Tuesday. Elisa Serna died while in sheriff’s custody in 2019 after striking her head against a wall of her jail cell as she collapsed from a seizure.

Martinez has said she embraces the auditors’ recommendations and is working to implement them. Hemmerling has said he wants to go further, citing improved technology to track medically vulnerable inmates, and he said effective change will only come with new leadership.

Both rejected the idea that outside oversight of the jails by federal or state officials might be needed.

Union-Tribune Editorial and Opinion Director Matthew T. Hall, who moderated the event, asked about de-escalation. He pointed to the fatal shooting of a Little Italy resident after a deputy served her with an eviction notification in March. Some policing experts were critical of the shooting that killed 47-year-old Yan Li, saying deputies unnecessarily escalated the encounter.

Body-worn camera video shows a deputy knocking on the door and handing Li the eviction notice — then almost immediately drawing his gun when he realizes Li is holding a large knife. Li, who reportedly had mental illness, slams the door and remains inside. Within the hour, deputies storm her condo. She charges at them with the knife, stabbing one. 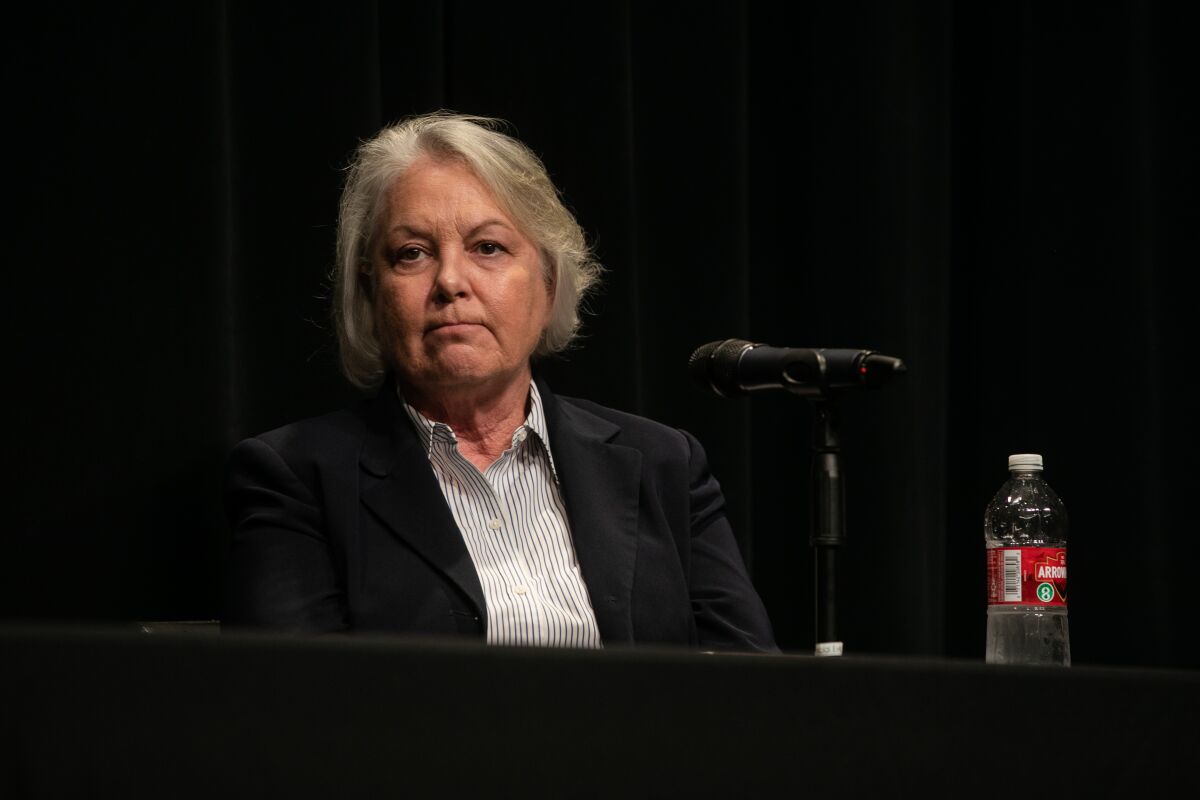 Martinez did not comment on the incident, but said she promotes “a culture of de-escalation,” and noted that such training has been in place for several years.

“I know that deputies over and above do de-escalate situations,” Martinez said. “They act with extreme patience and professionalism in almost every instance, and I’m really proud of the work that’s being done by our deputies toward de-escalation.” 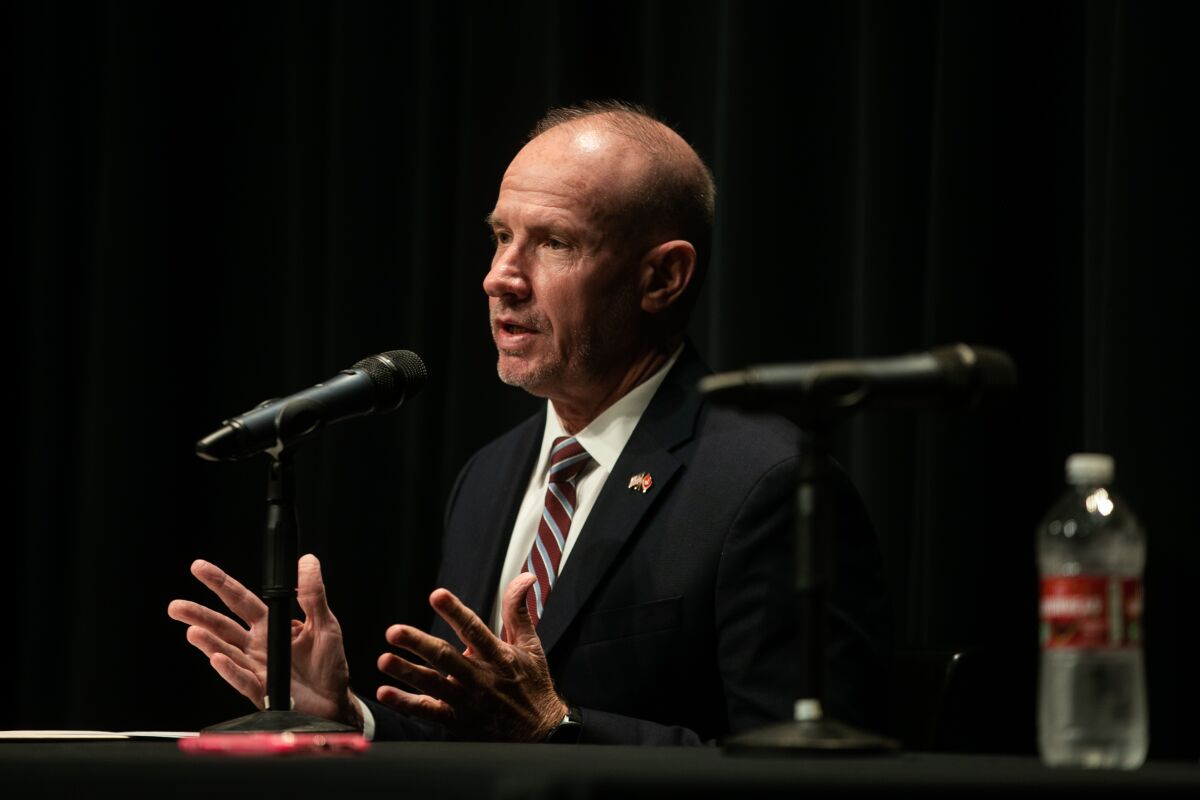 Hemmerling said he plans to review current policies, and he wants to see increased intervention by the Psychiatric Emergency Response Team, or PERT. He also said he met with supporters of the woman who was killed, a Yale-educated scientist.

As the forum neared its end, about a dozen family members of people who have died in local jails walked in and took seats by the stage in the Neil Morgan Auditorium. Some submitted questions for Hall to ask.

Just before candidates began their final remarks, the family members started speaking out.

“We don’t need apologies, we need sheriffs to be held accountable,” one of the men said.

Among the people in the group were family members of Saxon Rodriguez, who died last year after being found unresponsive in his cell. Sheriff’s Department officials said he overdosed on fentanyl and methamphetamine.

Also there were relatives of Elisa Serna, who died in custody in 2019 after she suffered a seizure, fell and struck her head and allegedly was left on the floor by a jail nurse.

The candidates for San Diego County sheriff, John Hemmerling and Kelly Martinez, met for a forum at the San Diego Central Library on Oct. 25 moderated by Editorial and Opinion Director Matthew T. Hall.

In Martinez’s closing remarks immediately following the outburst, she refuted the idea that she represented a continuation of the status quo.

“I’m new leadership,” Martinez said. “I came up through the organization as a woman in this organization.”

“I’ve made a lot of important changes already,” she said. “A lot of change is coming, a lot of excitement on our department about the changes that we need to make. … It’s absolutely crucial that the sheriff changes the way that we look at incarcerated people in this county.”

After Martinez spoke, Hemmerling said: “Tenure does not equate to leadership.”

“Leadership is one of the main problems with the Sheriff’s Department,” he said. “(It’s) why they can’t face these problems, why they can’t stop the jail deaths. No matter what they say, we need to stop the status quo.”

The Sheriff’s Department has more than 4,600 staffers and an annual budget of $1.1 billion. It handles law enforcement in nine cities, from Imperial Beach to Vista, as well as the county’s unincorporated areas. In addition to running the county jails, it provides security in the state courts.

With election day about two weeks away, new polling released Tuesday, Oct. 25, showed a tight race between the two — but a third of respondents said they were undecided.

The poll, commissioned by 10News and The San Diego Union-Tribune, found that 14 percent of the likely voters said jail deaths should be the next sheriff’s top concern.

Celebrating ‘can do’ at Special Needs Talent Showcase | Local News

Fire, flood-damaged acequias may struggle to get help | Local News