Demonstrators marched in Albuquerque’s International District Thursday night to protest police violence after an hourslong SWAT standoff ended in a home burning down and the death of a teen who was inside.

“That young man lost his life … because the police did not stop and think about what they were doing,” said Sundra Coleman, who lived in the house. “That was somebody’s son.”

Protesters and initial news reports said the boy was 14 years old. Police have since said they aren’t certain of his age and haven’t yet identified him.

But the family who lost their home are keeping him in their minds. “Remember him,” Coleman told protesters.

Police said they don’t know the cause of the boy’s death, though information from the Office of the Medical Investigator is expected soon.

Her mom worked two jobs all her life, Deja said, to raise her. When the house burned down, “they took everything,” she said.

The family was telling police a 14-year-old boy was still in the house, she said, “and they let him die, and burn.” 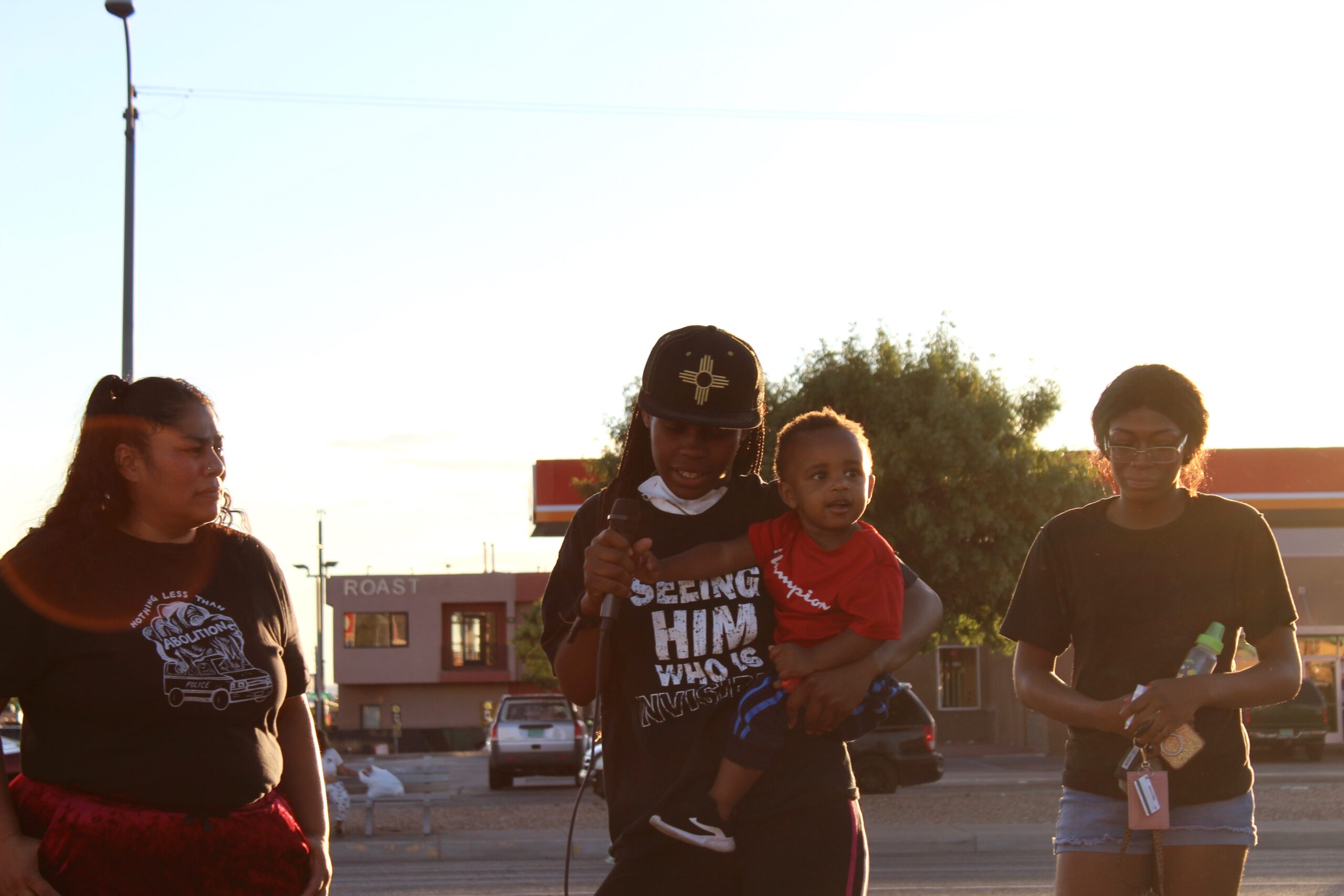 Deja (center) talks about what it means to her family to lose their home after it burned down during a SWAT standoff in southeast Albuquerque. (Photo by Marisa Demarco / Source NM)

On Wednesday, officers were following Qiaunt Kelley, who had warrants out for his arrest, one for “unlawful taking of a vehicle out of the city of Santa Fe” and one for a probation violation, according to a police lieutenant at a news conference Thursday.

Kelley and the teen went to the house where a friend lived, according to police, and when detectives tried to arrest Kelley, he ran inside. Then SWAT was called in, Police Chief Harold Medina explained Thursday.

Copwatchers and other observers there that night attended the demonstration and said munitions SWAT officers shot into the home started the fire.

“Different types of munitions were used,” Medina said. “It is unknown exactly where in the home the individual was.”

The Albuquerque Police Department and city’s fire department said they’re investigating whether tear gas and pepper spray canisters ignited the fire — such weapons have done so when used in similar SWAT situations elsewhere.

It’s unclear who gave orders preventing Albuquerque Fire Rescue from extinguishing the fire more quickly or saving the person inside. “It took time for us to turn off the fire,” Medina said. “We have to remember that the fire department, they are not police officers… It is a challenge for us to get them into an unresolved situation.” 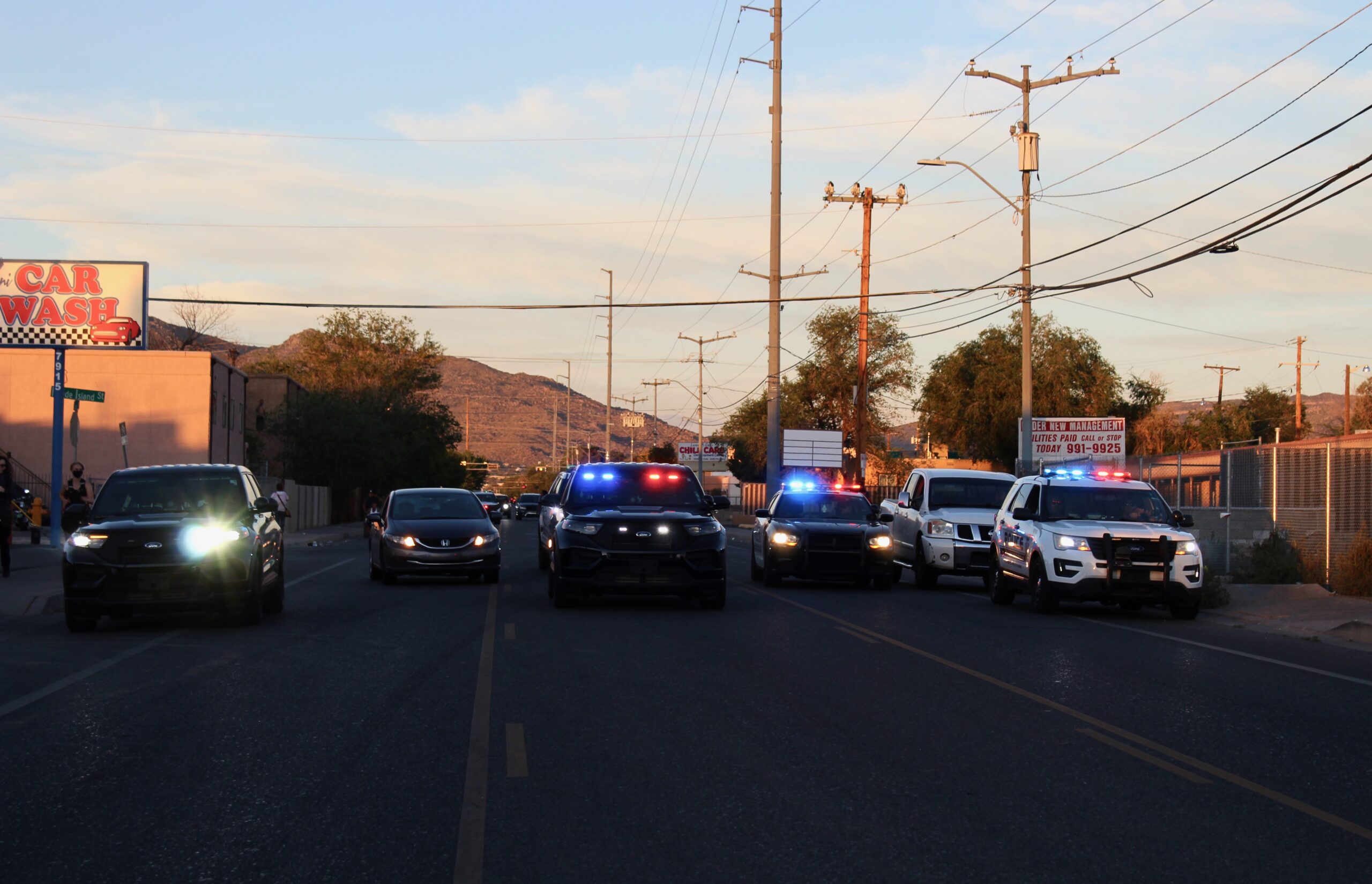 Police cars followed the demonstrators and police vehicles sat with lights flashing on every sidestreet as the march made its way through Albuquerque’s International District, while protesters shouted for them to leave their neighborhood. (Photo by Marisa Demarco / Source NM)

According to a fire department news release, firefighters had to battle the flames from outside the house “in coordination with APD” because Kelley was still inside.

When Kelley came out, fire crews went inside and found the teen dead, according to the news release.

Demonstrators said the teen was brought out of the burned house and laid in the street while people demanded he be given some dignity.

“A 14-year-old Black man — Black child — a child,” Clifton White corrected himself standing in the intersection of Central and Wyoming as night fell and the protest wound down, police lights flashing behind him. “They didn’t know who he was. He could have been a 9-year-old. They didn’t care. They used their toys. They burned a house down.” 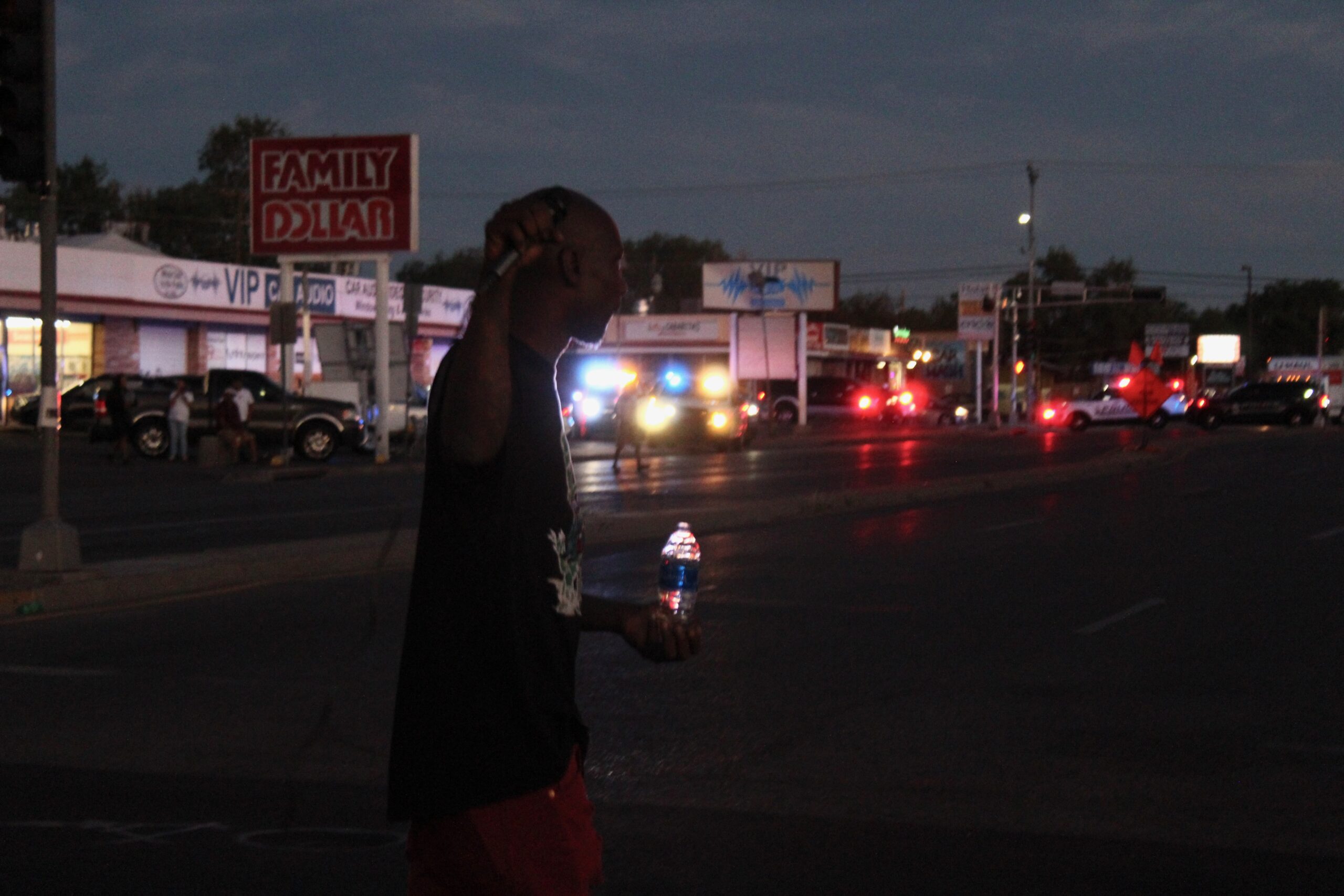 Clifton White’s name became part of a BLM protest chant two years ago when he was arrested and jailed following another demonstration in southeast Albuquerque. White speaks as Thursday’s protest concludes back where it began at Wyoming and Central. (Photo by Marisa Demarco / Source NM) 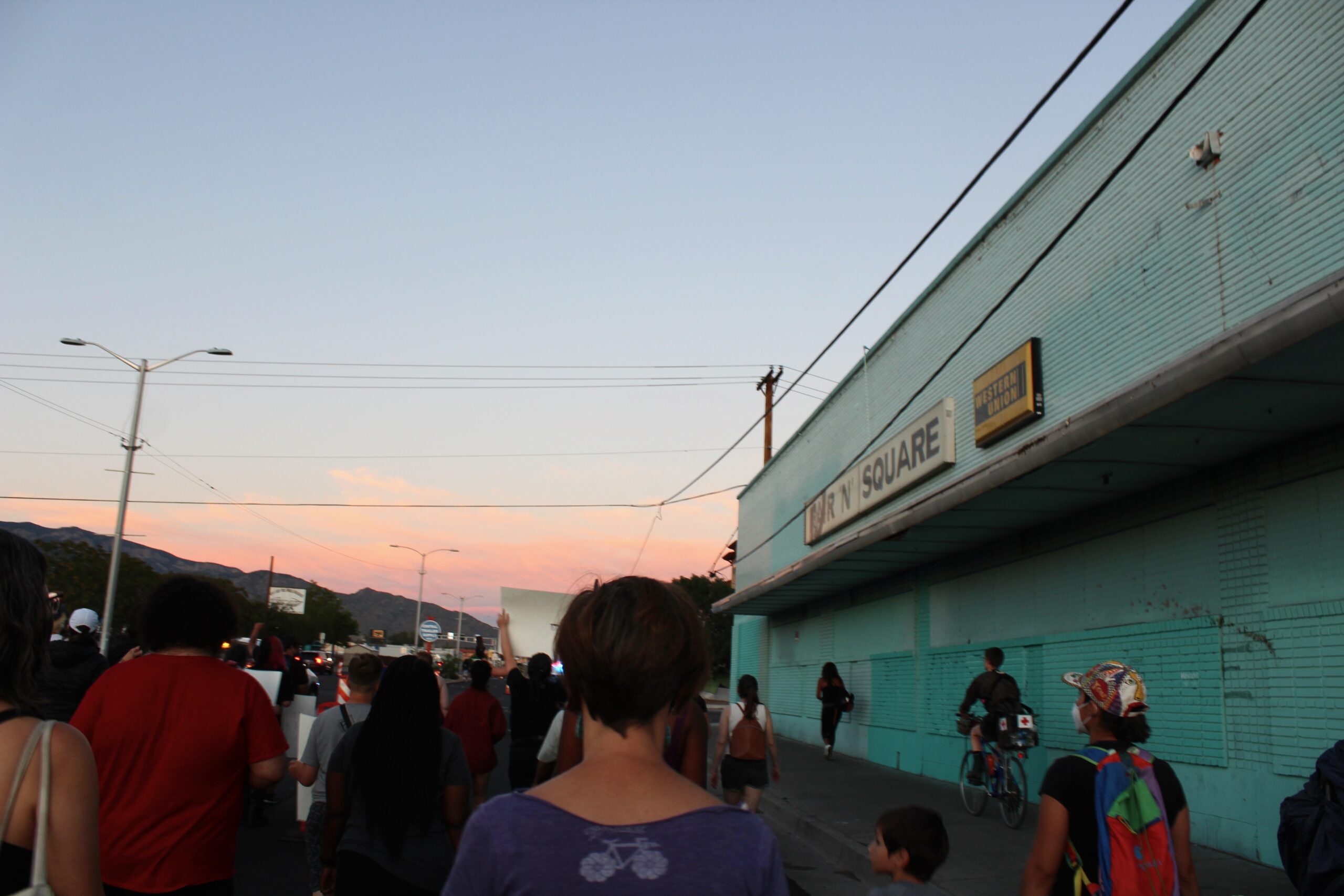 Demonstrators march up Central protesting police violence on Thursday, July 7, 2022, after a SWAT standoff the night before ended in a home burned down and a the death of a teen who was inside. (Photo by Marisa Demarco / Source NM) 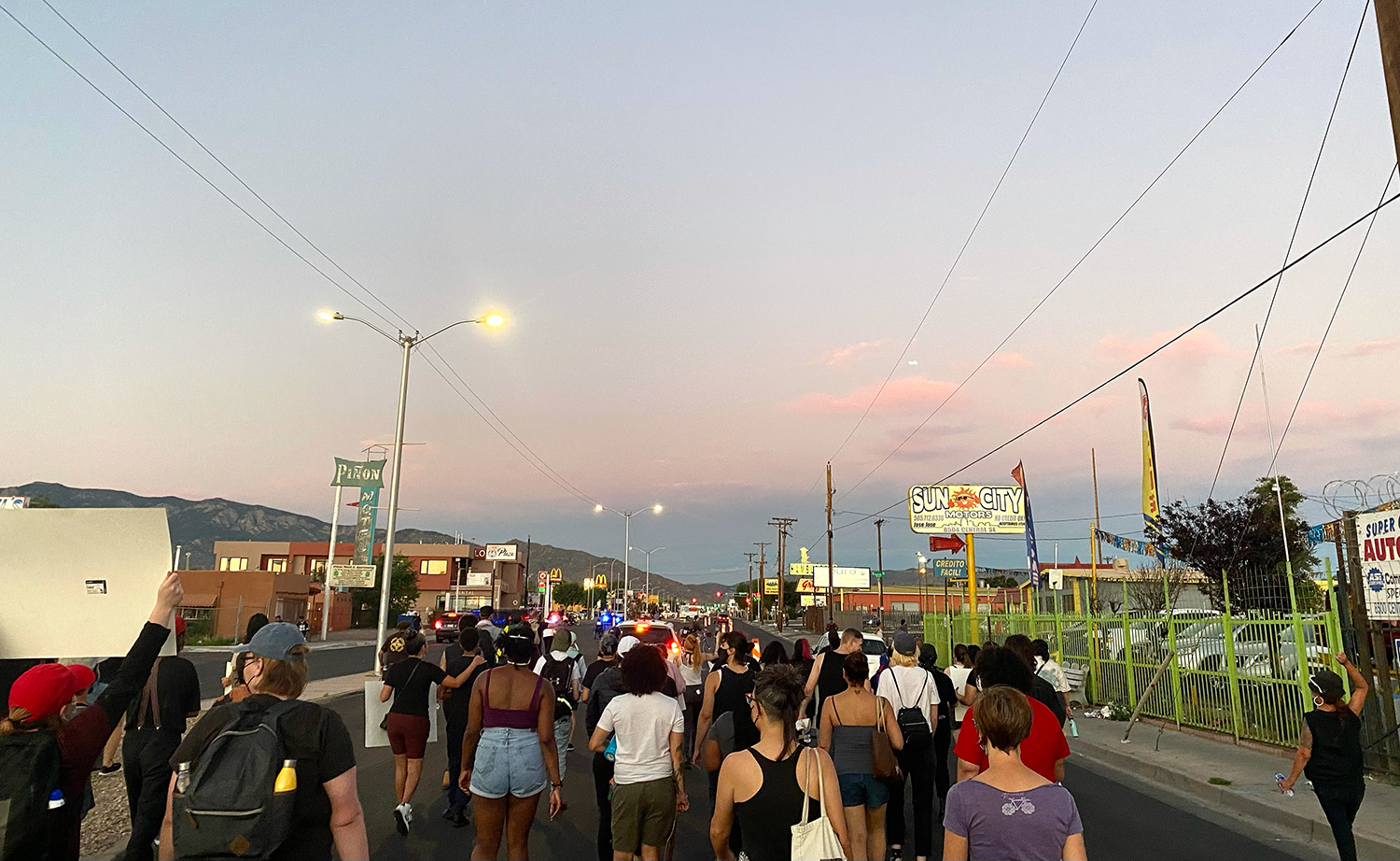