On October 3, San Diego International Airport hosted a heartwarming Heroes Reception for World War II and Korean War veterans returning home from their honorary flight to Washington, DC.Patriotic music plays just a small way of thanking those who served and have sacrificed.

The trip was organized by Honor Flight San Diego, a non-profit organization that is staffed entirely by volunteers. Every dollar raised will be donated to veterans with a three-day trip to Washington DC to recognize their contribution to the country and to visit the memorials dedicated to their service. Every journey ends with the homecoming of a hero at the airport, a homecoming some never got.

A total of 94 veterans took part in the trip, including those who served in World War II, the Korean War, and a Vietnam War veteran.

There were four veterans over 100 years old and six women, two US Navy WAVES (Women Accepted for Volunteer Emergency Service) and four female Korean War Marines. The oldest veteran of the trip was Bob Brown, a 104-year World War II veteran who served in the Navy for 30 years.

During the visit to the Military Women’s Memorial, each woman on the trip was honored and Winona Ruth Gunther, a World War II veteran and Solana Beach resident, received a Living Legacy Award in recognition of being a great patriot and first class pharmacist who paved the way for the next generation of military women.

Halboth said Honor Flight volunteers worked extremely hard this year and felt the love, especially as they all had a difficult year of pandemic. Without the support of the community, the trip would not have been possible.

Grace Miller, now a seventh grader at Pacific Ridge School, began helping Honor Flight when she was a third grader in Rowe with her friend Madison Stine. The girls were motivated to help when they learned that Honor Fight was about to cancel a trip due to lack of money.

That year, Grace sent her fourth veteran to help meet the $ 2,500 cost of travel through her horse riding competition revenues. The veteran she sponsored was Gunner Ward, a Korean War veteran, who said he was so grateful that a student would take the time to raise funds for such a cause.

Grace credits her Rowe teachers Halboth and Janel Maud for being her inspirations – learning Honor Flight at school made a huge impact on her. Grace is committed to always raising money for Honor Flight and she said she hope it is something that goes on and never goes away.

Third grader Ivy Hauenstein is hugged by a veteran.

“This is important to me because I can help send veterans who have served our country to their memorials,” Grace said. “It’s a great accomplishment and something you should see.”

Halboth, who is 31st year with R. Roger Rowe, first participated in Honor Flight as part of a hero’s welcome at the airport. In 2018, she served as the guardian (escort) for veteran George Sousa, a Korean War veteran and Purple Heart recipient from Rancho Santa Fe sponsored by Grace and Madison’s fundraising. Grace said she still talks to Sousa sometimes – Halboth said she considered George one of her best friends.

When the trip was canceled in May 2020 due to COVID-19, Halboth and Sousa set a goal of raising funds to send 10 veterans on the journey Roger Rowe sent a veteran, as did the Rancho Santa Fe Rotary and Del Mar Rotary.

As Sousa Halboth said of his own flight of honor: “It was a cure that I didn’t know I needed.”

There are so many wonderful stories like this one that Halboth finds priceless. She meets veterans who selflessly served their countries and lived incredible lives, and she sees how powerful Honor Flight can be for someone like Dick Erickson, a 96-year-old World War II veteran from Fallbrook who was on her team this year .

“He’s literally a new man, he loves Honor Flight,” she said. “He was overwhelmed by everything.” 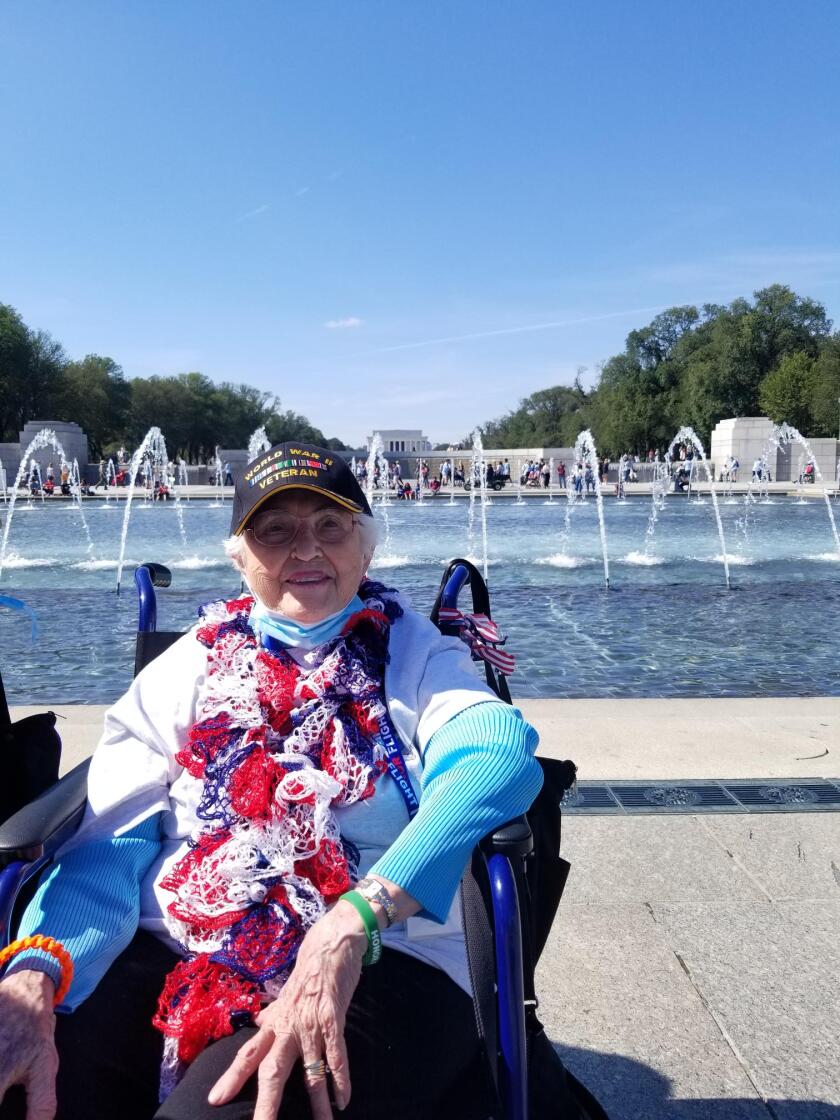 Winona Ruth Gunther at the WWII Memorial in DC

Gunther has lived in Solana Beach since 1962 when she moved with her late husband, Herb, a World War II veteran who accepted a position as headmistress at Earl Warren Middle School. The school is very close to where she currently lives, in the senior community of La Via Del Mar, where the astute centenarian has her own radio program.

On October 11th, she shared her story as a woman in the military and her honorary flight experience with roommates. Honor Flight team leader Leslie Granger, the proud daughter of a WWII veteran who completed her 11th Honor Flight this year, interviewed Gunther for her radio show.

“When I meet people like Ruth, I get so inspired because I learn so much and want to learn more,” she said.

After Pearl Harbor, Gunther told her mother that she wanted to serve. She remembered her mother saying, “A daughter of mine in the military? What would your father say? “

She knew her father would be proud – he had died in 1941 but had instilled such a strong love for the country in her. When Gunther wrote one of two memoirs she wrote in her 90s, an excerpt was read by Granger: “This is something I have to do.”

Gunther was 23 years old and was working as a pharmacist when she volunteered in 1942 to be among the first WAVES to join the hospital corps. She was concerned about leaving her mother alone with her eleven siblings: “I was the oldest at home and I knew she would miss me,” she said.

Eventually, three of Gunther’s siblings would follow her into the service, including her sister who joined the Marines. “My mother had four blue stars hanging in her window and luckily none of them became gold stars.”

After volunteering, Gunther traveled by train to Chicago and boot camp at Hunter College in Bronx, New York. From there she took the train to the Corps School of the Naval Medical Center San Diego (she recalled that women were instructed to walk in a “business corridor” on campus and had to be escorted back to the barracks by a man). “I earned my first strip after Corps School and was so proud,” she said.

From San Diego she went to the Corona Naval Hospital in Norco, where she cared for the wounded from every battle in the Pacific theater for the remainder of the war.

“One of the hardest things was that these kids were so young. One of my patients was 17 and turned 17 in Guadalcanal, ”she said of the location of the first great offensive and the Allied victory in the Pacific. “He reminded me of my little brother. It felt like he needed a mother, he missed his mother. “

Gunther said she loved her time in service with her fellow WAVES, who came from all different backgrounds, races and religions and became like family. She said there were mixed feelings when the war ended and they returned to their lives forever changed by their experiences.

On her stormy tour of DC, in addition to the great honor of being recognized at the Military Women’s Memorial, Gunther said she was deeply touched by the Vietnam Women’s Memorial. The memorial depicts three uniformed nurses caring for a wounded soldier and representing the virtues of faith, hope and charity. It opened in 1993 as the first memorial on the National Mall dedicated to women’s military service.

Each honor flight includes a surprise “mail call” where veterans receive notes and cards from family members, friends and strangers, including many young students. For the 104-year-old Brown, Halboth called his high school in Needles, California, where he attended class in 1935. Current high school students wrote him warm letters. On October 11, Halboth delivered a late mail call for Gunther, a package of 50 notes written by juniors and seniors at their Twin Lakes High School alma mater in Indiana.

As a teacher, Halboth wants her young students to understand that this story wasn’t that long ago and that these living legends have valuable stories to tell. 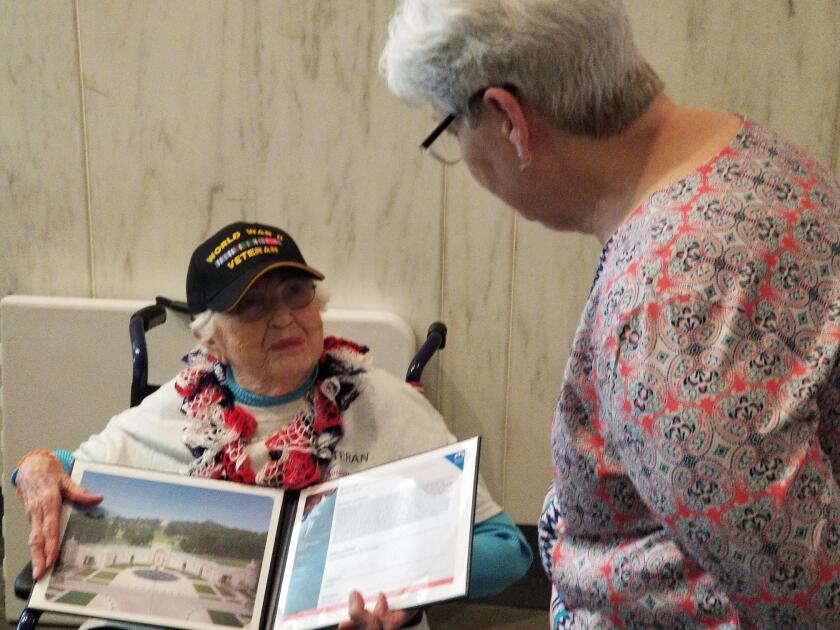 Several Rowe students were at the airport to greet the hero on October 3rd. Rowe student Sloan Harris, who had made a birthday card for the oldest veteran of the trip, was able to meet and greet Brown and remarked in amazement: “I met a 104-year-old!”

As the veterans were welcomed home, third grader Ivy Hauenstein received a warm, unsolicited hug from one of the veterans who was just so excited to see her.

Max Gurney, a 100-year World War II veteran from La Jolla, told Halboth when he heard the cheers of thanks and the flags in red, white and blue waved, “This represents the soul of America.”

Gunther agreed with the feeling.

“You watch the news and wonder what is happening to our country, but in every place we have been people came up to us and thanked us for our service,” she said. “I see all the children coming to honor us and I think maybe our country will make it.”

The next honor flight will take place in spring 2022 and more and more veterans and volunteers are wanted. Applications are available online at honorflightsandiego.org