The 36-hole tournament, featuring 18 holes on both Monday and Wednesday, belonged to Torrey Pines from start-to-finish. When the final scorecards were tallied, the Falcons found themselves six over par as a team, leaving Classical Academy 20 strokes behind in second place with Eastlake another 39 back in third. La Costa Canyon captured the Division II crown, finishing 11 strokes better than runner-up Cathedral Catholic.

The post-season party never gets old for Drake whose Torrey linksters have won 11 section banners since 2010. “Every year I’ve been lucky enough to be part of this and be in the mix, it’s been exciting,” said Drake. “You’re never too comfortable at this event because there’s just so much talent in the area.

“But this is the deepest team I’ve had in 15 years with the program and I feel like any one of our 10-leading guys could have stepped in and contributed this week.”

Drake’s roster also has some legitimate firepower at the top in the form of junior Phillip Kench. The rock steady junior carded a seven-under par 137 (68-69) to secure the overall individual championship by one stroke over Classical Academy senior Luke Potter. The UNLV-committed Kench, who finished fifth at this tourney as a sophomore, led virtually wire-to-wire and was one of just four players to go under par both rounds. 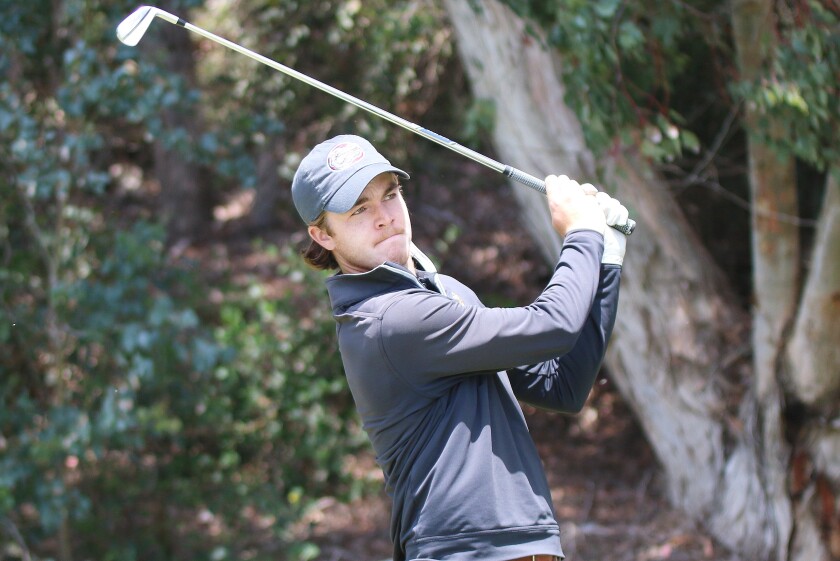 At La Costa, the key is to make pars,” said Drake. “There’s a lot of potential mistakes looming out there so it’s important to play it smart, know when to just do what you have to do to get your par and move on.”

Being a thinking man on the course is one of Kench’s biggest attributes and it came in handy on the 6,587-yd. La Costa layout. Over the two days, he piled up 27 pars to go with eight birdies and a single bogey.

“My game plan was just to keep it in play and be on as many greens in regulation as I could,” said Kench, who did just that on 17-of-18 holes Wednesday, May 18. “Par was gold today and if there was an opportunity to squeeze in a birdie, I tried to attack it.”

He couldn’t simply sit back, however, not with former CIF State Champion Potter lurking in his foursome. After uncharacteristically dropping three strokes to par through the first six holes of round two to slip five strokes behind Kench, Potter rallied down the stretch, piling up four birdies and pulling back to within one after posting an eagle on the 416-yd. par four 16th hole. Both players birded the 17th. 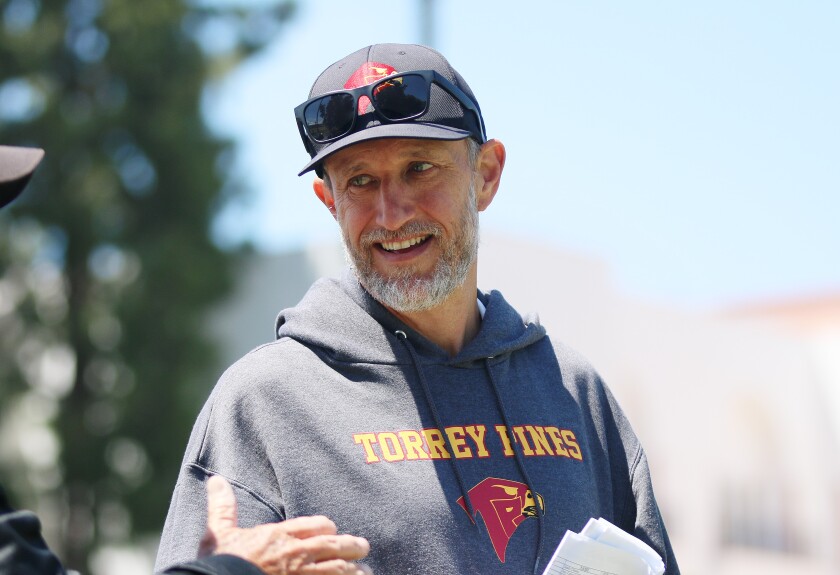 Potter holed out for par on the 18th, meaning Kench needed to sink his own three-foot par putt to claim the section title. After his ball covered nearly every inch of the cup’s rim before dropping in, he put the victory in context and conceded that there were some butterflies along the way.

“Everybody does have pressure and I definitely felt it a little today,” said Kench. “I’d been putting well all day but you saw that 360 lip on 18. For the most part, I thought I did a really good job handling nerves.

“I’d have to call this my biggest win. I’m really stoked about it and hope there’s more to come. It was also a learning experience. At my age, the key is to just keep learning—don’t plateau.” 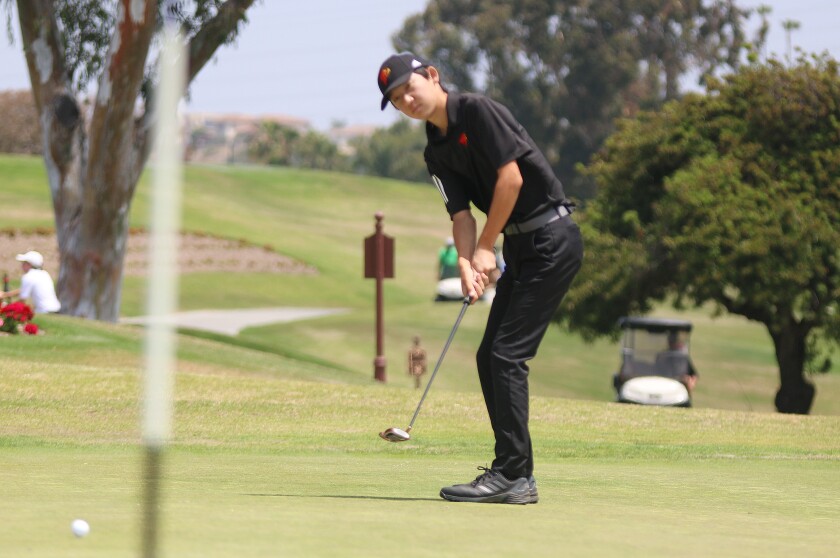 Kench had a strong supporting cast as far as the team championship was concerned. Sophomore Jay Leng tied for seventh at one-under and junior Ryan Podlowski fired a three-under on Wednesday, May 18, beating his Monday, May 17, score by 10 strokes to place in a tie for 13th at four-over with, among others, sophomore teammate Josh Chung and Canyon Crest senior Jaden Hunter. Sophomore Colin Li had back-to-back three-over scores which put him 22nd. Junior Matt Broder was the Falcons’ non-scoring sixth golfer. For Kench, the individual crown was notable but not as important as what he accomplished with his teammates.

“I love the team aspect, it’s my favorite type of golf, honestly,” said Kench. “We won CIF, as a team. I mean no individual trophy is more significant than that.

“I love Torrey Pines and we get another banner in the gym—that’s what we were after.” And just a note for any teams saying “wait until next year,” be aware that all six members of this week’s TP lineup will be back in 2023. 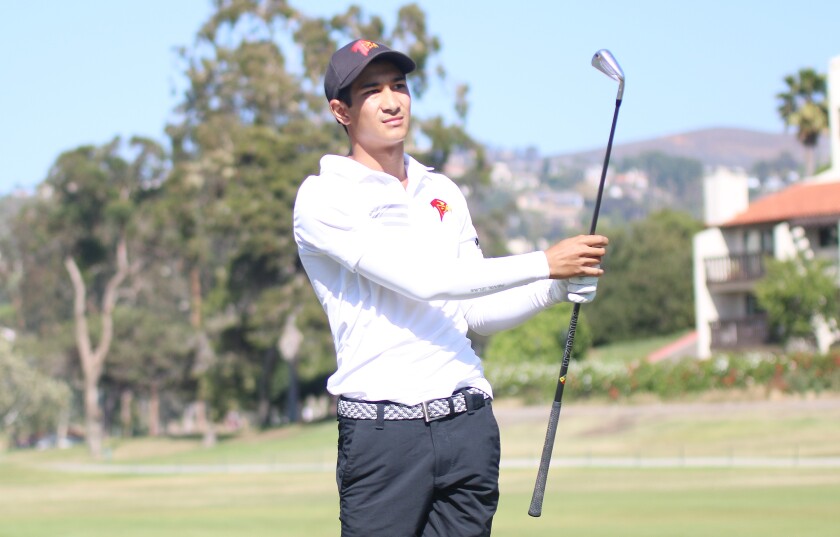 Meanwhile, the ’22 season’s not over for the Falcons. Along with Classical Academy and the 12 best individuals remaining from other teams, they have qualified for the single day, nine-team CIF/SCGA Southern California Regional Championship, Thursday, May 26, at Brookside Golf Club in Pasadena. The top three teams at that event will advance to the CIF State Championships, scheduled for Wednesday, June 1, at San Gabriel Country Club. Drake is eager to face that test. 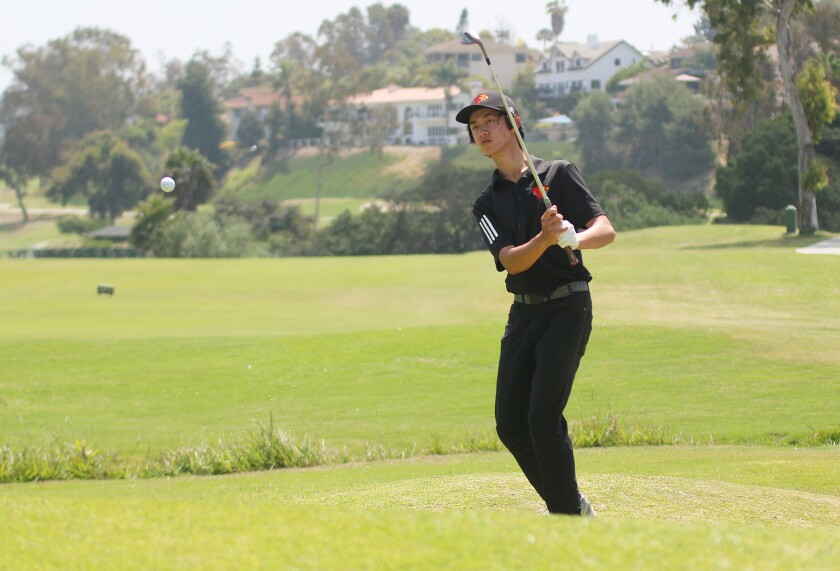 “This year we had a great team and I was confident we would have some success if they all played together as a team and put the team first,” said Drake. “They did that.

“Every single one of these guys played great golf this week and I like our chances to make it to State.” 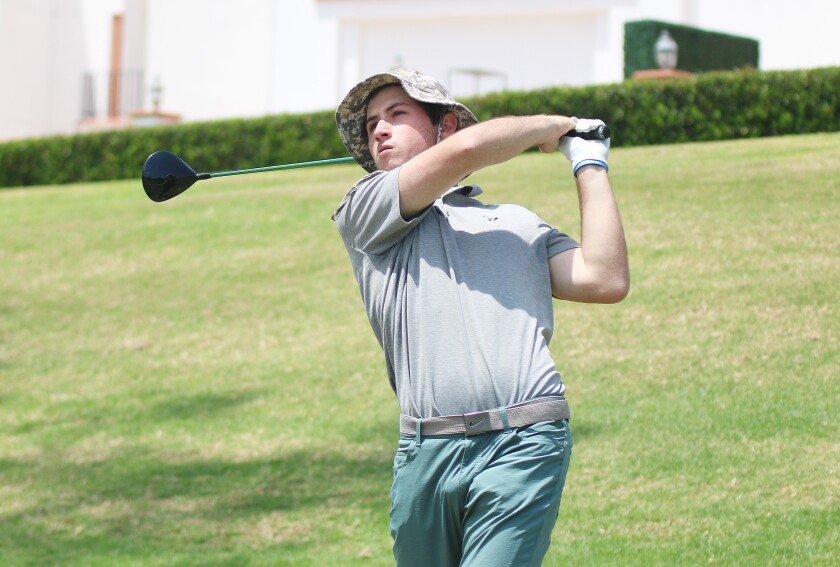