Thursday night inside the UNM School of Law was a homecoming for Interior Secretary Deb Haaland, who was warmly received by an audience of hundreds.

But outside, families representing 17 missing or murdered Indigenous people were crying in the rain, asking when their loved ones, or justice, will come to their homes.

Haaland, a 2006 graduate from the law school, arrived to give a lecture on civil rights as part of the US Senator Dennis Chavez Endowed Symposium.

She spoke on environmental racism, climate change, why her Indigenous perspective is vital, and she shared the story about her grandmother forced onto a train near her home in Laguna Pueblo to a boarding school in Santa Fe.

Some of the families outside made their way into the law school foyer for the speech, and after it was over, they were offered a chance to ask: What is Haaland doing to push law enforcement to move on these cases involving their family?

The cabinet secretary highlighted the creation of the Missing and Murdered Unit at the Bureau of Indian Affairs that has hired 17 officers this year to track Indigenous cases.

She noted her work in Congress to strengthen the Violence Against Women Act that gives tribal law enforcement agencies greater reach in prosecuting cases.

Haaland even mentioned she was active in some of the very first MMIWR awareness events in Albuquerque, “where there would be like four people that would show up,” and elevated the matter during her time in Congress and in her capacity with Interior Department.

All of this is respectfully appreciated by Vangie Randall-Shorty, but she said it doesn’t do much to accelerate the investigation into the 2020 killing of her son.

“I’m disappointed,” she said about Haaland’s response to her question.

Family members of Zachariah Juwaun Shorty speak about their loss during a MMIWR demonstration as attendees of a speech by US Interior Secretary Deb Haaland at the UNM School of Law begin to walk past. (Photo by Shelby Wyatt for Source NM)

Zachariah Juwaun Shorty’s case is under investigation by the FBI, which has a $5,000 reward for information on his death. His mother said two members of the BIA unit Haaland created did visit her home in January to learn about the case and sort through photos, but she hasn’t heard anything since that interview.

“They came out to my house, and they gave me their time. They spoke with me, listened to the story. They went out to the location where he was found. They took pictures. And I was able to tell them about it,” she said tearfully, but still insistent on what’s next. “Like, it’s been two years now.”

She asked Haaland for an update on what the BIA unit is doing to make progress in Shorty’s case. The secretary offered sympathy but ultimately declined to answer, saying she did not have the case file for reference.

“Because I don’t have specific details and I don’t have the case in front of me — I haven’t particularly spoken to the Missing and Murdered Unit investigators that you spoke with — I don’t I don’t have that kind of information,” Haaland said. “I’m very sorry for your loss.”

Shorty (Diné) said her son’s case is also getting bogged down in the routine and well-known problem of jurisdiction. He lived in Kirtland NM, was last seen in San Juan County, and his body was found on the Navajo Nation near the Nenahnezad Chapter House.

She entered the maze of law enforcement, contacting local police, the county sheriff and tribal police before being told the FBI took on the case. More than two years later, no arrests have been made.

“I need answers. I don’t want my son’s case closed,” Shorty told Haaland. “There’s many families here that are coming out to you for help. We don’t know where to go.” 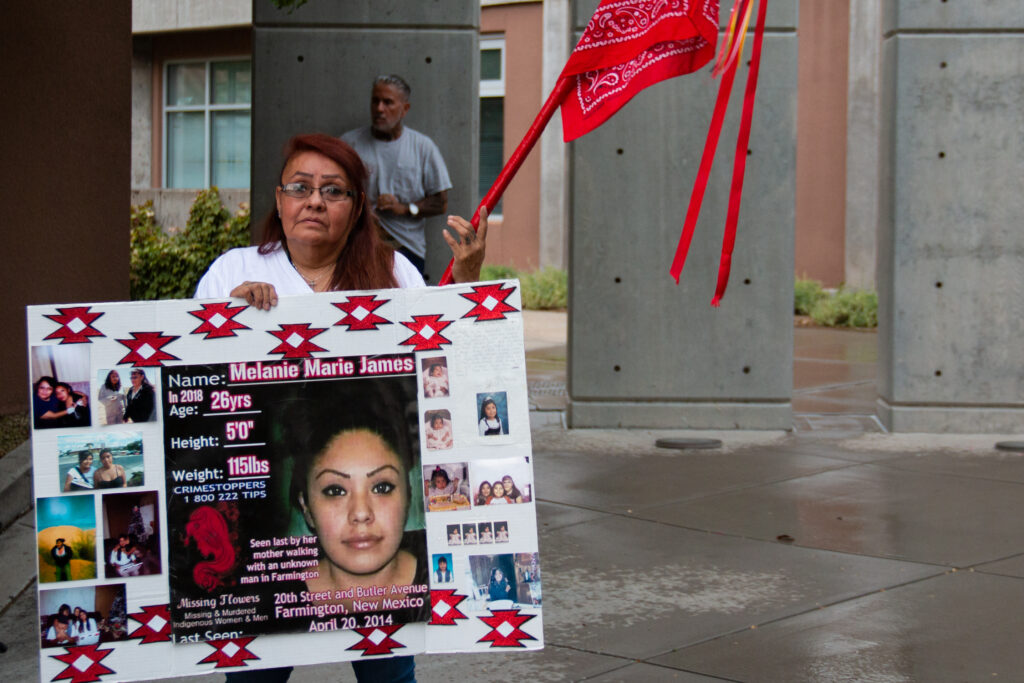 Lela Mailman holds up a sign with photos of her daughter Melanie Marie James, who is missing. She was last seen in 2014 in Farmington, NM (Photo by Shelby Wyatt for Source NM)

Lela Mailman (Walker River Paiute) drove the roughly three hours to Albuquerque from Farmington to ask Haaland why police were so unhelpful when she first called for help in finding her daughter Melanie James, who went missing from the Four Corners community in 2014.

“Nobody seemed to have taken this seriously,” Mailman said. “We shouldn’t have to go by statistics. This is reality. And there are a lot of people out there who have the same reality. A lot of (police) will give us an attitude. They judge all these that are missing, all these that are murdered.”

While Haaland, again could not give a specific answer to Mailman’s question about police bias, she did stress the matter is important and will take time.

“It’s not an issue that’s been over the past couple of generations,” she said. “It’s a 500-year-old issue, and it will take more than one law, or two months.”

Haaland left the event to standing applause, while the families went back outside, hoping to get a one-on-one moment with the secretary to show them their loved ones’ photos or ask her questions. Haaland went out a backdoor and immediately left in an SUV while the families held signs and asked for help. 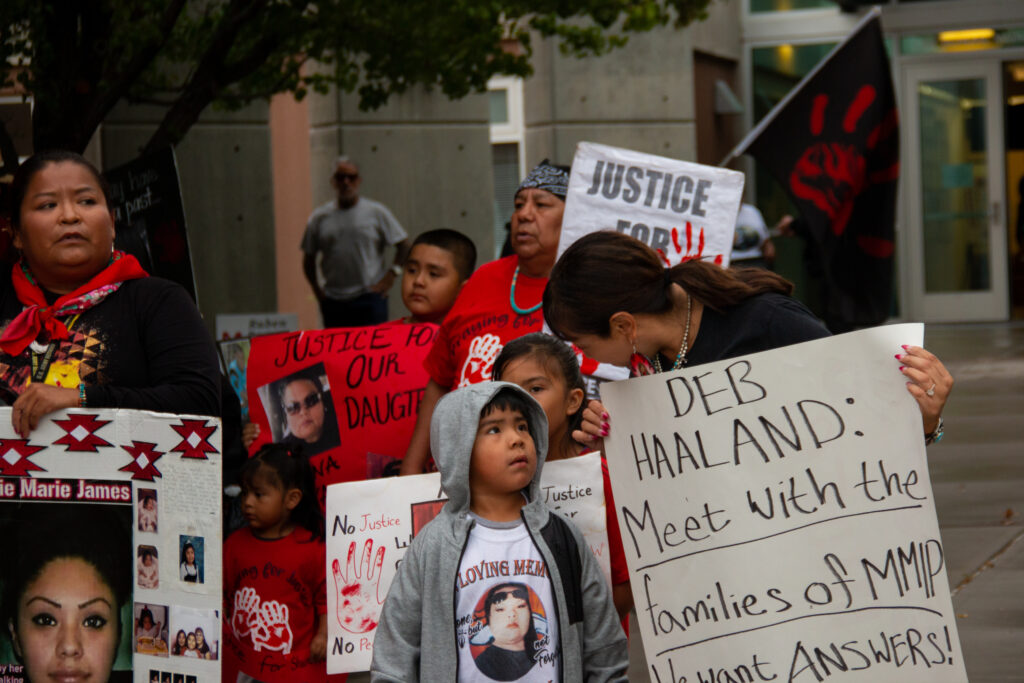 Victims’ advocate Darlene Gomez speaks to one of the children of Shawna Toya at a MMIWR demonstration on Thursday, Sept. 22, 2022. The families said they were hoping to draw the attention of Interior Department Secretary Deb Haaland, who was speaking at the UNM Law School, to their family members’ cases. (Photo by Shelby Wyatt for Source NM)