Federal oversight officials this week told U.S. Immigration and Customs Enforcement to move everyone out of Torrance County detention center in Estancia, N.M., until it can fix unsanitary and unsafe conditions inside.

ICE leadership wrote in a letter to Cuffari on March 7 that OIG “ignored facts presented to it in order to achieve preconceived conclusions.”

ICE leadership wrote the Torrance County detention center is “in compliance with relevant detention standards for staffing and sanitary conditions and that OIGs recommendation is unwarranted.”

But OIG says ICE itself published a report just days earlier that found CoreCivic had not been providing a safe environment for staff and incarcerated people, including problems with maintenance, cleanliness and personal hygiene needs.

“We reiterate our recommendation that detainees should be immediately removed from this facility,” OIG wrote back to ICE.

In addition to housing migrants, the Torrance County lockup houses federal prisoners and serves as the county’s jail. It’s owned and operated by CoreCivic. ICE pays the company about $2 million a month under their contract, according to the report. CoreCivic also owns and runs migrant detention in Cibola County.

Between Feb. 1 and Feb. 3, the Inspector General’s Office conducted an unannounced, in-person inspection of the detention center to find out if it complies with the ICE’s own standards for detaining people. They found 176 people being held there in “egregious conditions.”

The staffing crisis has prevented the detention center from meeting requirements under a contract between CoreCivic and ICE meant to “ensure detainees reside in a safe, secure and humane environment,” the report states.

“We recommend the immediate relocation of all detainees from the facility unless and until the facility ensures adequate staffing and appropriate living conditions,” OIG wrote.

It’s extremely rare that the OIG releases an urgent alert based on one of its investigations and calls for the immediate removal of people from a facility, said Rebecca Sheff, a senior staff attorney on immigration at ACLU-NM. The findings aren’t surprising, she said, but advocates are heartened to see OIG taking them so seriously.

“The inhumanity of the situation speaks for itself,” she said.

As of Friday afternoon, ICE had not responded to a request for comment on whether it has followed OIG’s recommendation to move the people held while awaiting immigration proceedings to other detention centers.

Sheff said the ACLU doesn’t know whether anyone has been released or transferred since the report came out.

The American Civil Liberties Union of New Mexico is calling for everyone held in migrant detention in Torrance County to be processed and released, not transferred to other facilities, so they can start to heal from being in such degrading conditions. It’s also calling on ICE to end its contract with CoreCivic.

Inspectors found the Torrance detention center exposes workers and incarcerated people to “excessive and avoidable unsanitary conditions.” More than half of the occupied cells have broken, clogged or continuously cycling toilets.

They found faucets without cold and hot water buttons, some with no hot water, and broken sinks and water fountains. COVID-19 restrictions on the water fountains left incarcerated people to get drinking water communally from a faucet meant for filling mop buckets.

The OIG report includes a photo of an incarcerated person holding a cup under running water. ICE accused OIG of staging the photo, based on its own review of surveillance footage.

The inspectors wrote they saw an incarcerated person filling a cup with water from the mop bucket faucet, but couldn’t photograph him doing it.

“Therefore, OIG inspectors asked him to demonstrate how he filled the cup to allow for a photo to document the issue,” the inspectors wrote. “The photo was not staged but rather a recreation of what the team had observed just moments prior.” 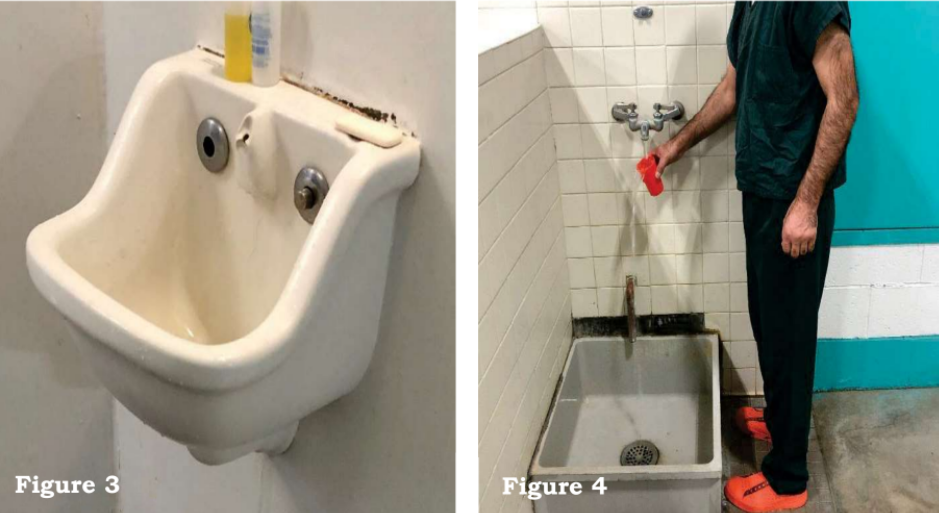 For at least a dozen days, staff did nothing about mold and water leaks, according to the report, which exacerbated unsanitary conditions and could lead to slips and falls, and health issues from anyone breathing in the mold.

Setarah Ghandehari, advocacy director for Detention Watch Network, said in a statement Friday that the OIG report “adds to the overwhelming bank of evidence detailing how ICE detention is inherently cruel and abusive.”

The network, a national coalition of immigrant rights groups, is reiterating its demands to release everyone in ICE detention and entirely abolish the detention system.

“In light of this horrific report, immediate action must be taken to release all people detained at Torrance and permanently shut down the facility,” Ghandehari said. “No amount of ICE funding and staffing changes can fix a fundamentally inhumane system operated by an agency that has been shown time and again to systemically disregard the health and safety of the people in its custody.”

The Torrance detention center, along with the ones in Cibola and Otero counties, has well-documented “chronic and systemic human and civil rights abuses,” said Margaret Brown Vega, an anthropologist and volunteer for Advocate Visitors with Immigrants in Detention. She was speaking to New Mexico lawmakers during an October 2021 legislative hearing.

The ACLU has been documenting and raising similar issues at ICE facilities nationwide, and at Otero and Cibola. Sheff pointed out that transgender asylum-seekers at Cibola were sent elsewhere after similar concerns about fundamental health and safety were raised with CoreCivic, Sheff said. 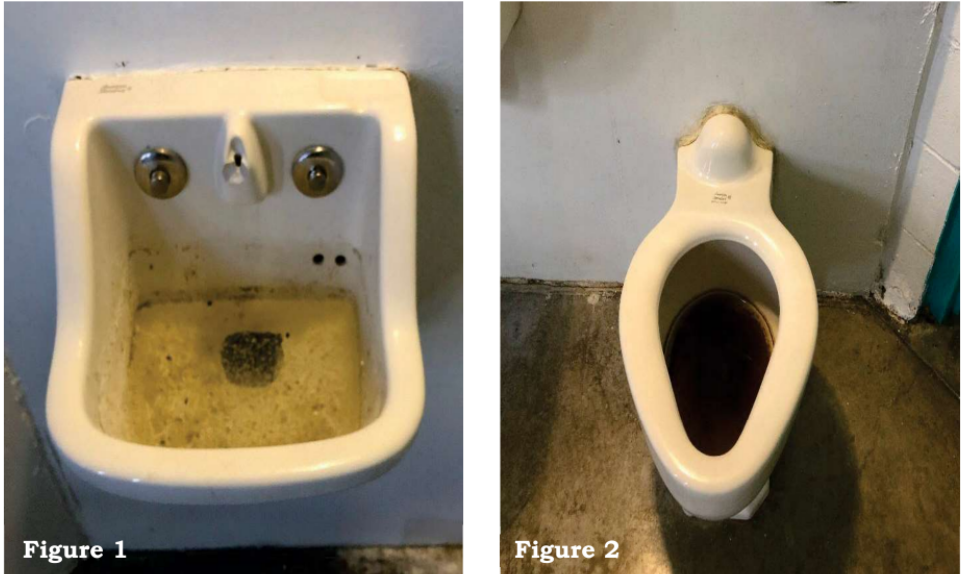 A non-functioning, moldy sink (left) and a clogged toilet full of human waste (right) observed in vacant cells in an occupied housing unit. (Caption and photos from the Department of Homeland Security Office of the Inspector General)

Torrance County commissioners and CoreCivic are defendants in an ongoing lawsuit after guards  used pepper spray on at least nine asylum-seekers who were engaging in a hunger strike in May 2020. They were demonstrating to call attention to a lack of COVID-protections in the detention, they said, and that they were receiving little information about the status of their immigration cases.

In December 2020, ICE published its own report telling CoreCivic the company was not following the contract because of staffing shortages, medical and otherwise.

Inspectors found guards did not properly supervise and monitor incarcerated people. The guards’ control rooms have blind spots and poor sight lines, and are understaffed, the report states, with just one guard assigned to watch four housing units at once.

ICE responded by saying the detention center has “only housed a number of detainees that is commensurate with current staffing levels at any given time.”

In response to the OIG report, ICE also said in November 2021 it passed an annual inspection done by The Nakamoto Group, a private company hired by ICE for inspections. But those Nakamoto reports have been broadly recognized as not robust and “essentially a rubber-stamping exercise,” Sheff said.

Even so, Torrance failed the Nakamoto inspection in July 2021, Sheff said. Inspectors identified similar staffing issues and other safety and sanitation issues. That’s remarkable, she said, because most facilities tend to pass those inspections.

It shouldn’t take advocates raising these issues, or detained people filing grievances or calling emergency hotlines, or an oversight agency coming all the way from Washington D.C., Sheff said, but the existing routine inspections are completely inadequate.

The inspections don’t necessarily result in real change, she said. It’s clear the changes recommended in the July 2021 report were not made, she said, so the follow through also is not there, even on the rare occasion where they do fail the inspection.

“It speaks to how the broader system is just incapable of assuring basic minimum standards are met to make sure that people are safely treated right with care and dignity when they’re held in these facilities,” she said.

The OIG is also working on a forthcoming report on the Torrance detention center about deficiencies in staff-detainee communications, detainee classification, COVID-19 mitigation, medical care and access to legal services.

That warrants continued vigilance and close attention to what’s happening at the facility, Sheff said.

“This isn’t the end of the story,” she said.

Busy Albuquerque intersection could get upgrades

The New MADD Movement: Parents Rise Up Against Drug Deaths