Houston couple on mission to save 1930s castle in Santa Fe, Texas

Ian Dennis and his wife Kristen smiled as they held the keys to their crumbling castle, fully aware of the challenges in front of them to save it.

This week, the couple purchased the Santa Fe Castle, also known as the Pignataro Castle, located off Highway 6 in Santa Fe, Texas, about 35 miles outside Houston. The property’s 2022 assessed value was $807,380, according to the Galveston Central Appraisal District, but Dennis says he paid more than it was worth.

“It was the only way of doing it because there was a lot of interest in it, but I was the only one who wanted to restore it,” Dennis said. “It is very high-end commercial property, the actual land is very valuable, but to me, the value is in the castle itself.”

According to the Santa Fe Area Historical Foundation, the castle was built around 1934. Only legends and myths explain why it was constructed though. It has belonged to the Pignataro family since 1970, and at some point fell into disarray.

Dennis is from the north of England, which he says is ironic because, according to him, castles were traditionally made to keep English people out. He moved to the Houston area to do cosmetic tattooing, and said that he “risked everything” to focus on saving the castle.

“It’s one of those things where you see it, and you get a bit obsessed with it, and you fall in love with it, and then you find out it’s for sale,” Dennis said. “It’s worth taking the risk.”

Ian and Kristen Dennis are planning on saving the castle and turning it into a museum, bed and breakfast, and possibly more.

A piece of history

Robert Bear from the Santa Fe Area Historical Foundation said the castle was built by the ex-wife of John Christensen in the 1930s. Christensen was a Danish immigrant who came to the United States in 1891 with only $16, according to Bear.

Christensen would work on the Galveston docks and save enough money to become the owner of the first Ford automobile dealership, John Christensen & Co., on Galveston Island. After Christensen passed away, it is believed his widow then had the castle built on a farm Christensen owned.

There are multiple legends surrounding the castle’s history. One legend goes that Mrs. Christensen built the castle to give to the Catholic Church as a retirement home for nuns, but the church did not want the castle — so she made it her home.

Another says that a wealthy Texan had the castle dismantled in Europe and reassembled at its present-day location as a home for his mistress, according to the Foundation. Or the castle was built by an eccentric woman to live out a childhood fantasy.

Regardless of how and why the castle was built, the property changed hands in 1954, 1966 and 1970 when Franco Pignataro, a Sicilian-born royal policeman turned American chicken farmer turned restauranteur bought the castle because it reminded him of home.

Pignataro converted the 26-room castle into several apartments, installing a fence, iron gates, a pool and a concrete gazebo, and importing most of the furniture from Sicily.

“After that, there was a little pizza place there,” Bear said, “and then after that it just kind of dwindled.” 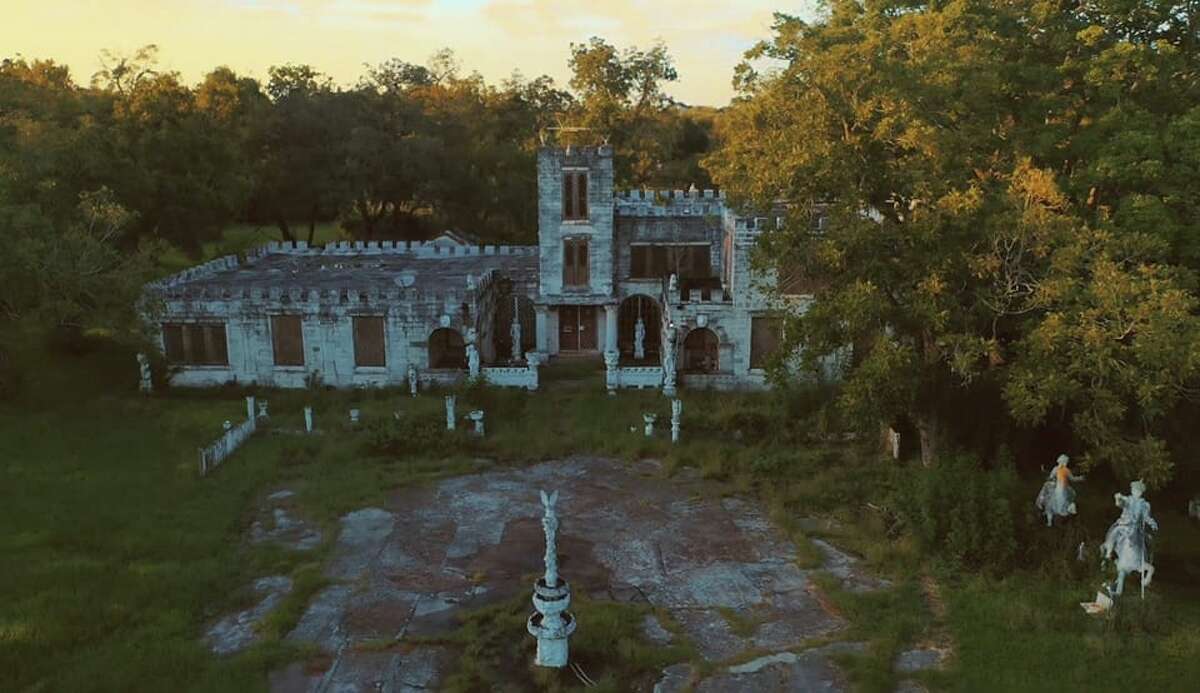 “Everything needs repairing, from the foundation to the roof, to the windows,” Dennis said. “Everything that could be done needs doing.”

Dennis said the odds are stacked against him and his wife, but added that saving it would be impossible if they made the purchase in a year or two. As of right now, Dennis and his wife are not living in the castle because it would be too dangerous.

After they finally do renovate the property, Dennis wants to turn part of it into a museum, and have several ideas about what to do with the rest.

“The great thing about a place like this, which is so unique and captures people’s imaginations, is that we can do what we want with it,” Dennis said. “As far as living it in, probably not. We’d rather it be a business. We need to make some money from it.”

There is a smaller “mini castle” attached to the property that they said looks like it was made to be an Airbnb. The couple plans on renovating that first to help make money for the rest.

Dennis also said he plans on changing his name on the deed to “King Ian” once they get a new roof.

The couple started a Facebook group, Restoring Santa Fe Castle, to document the castle’s renovation. As of Wednesday afternoon, it has nearly 20,000 members.

“I woke up one day and thousands of people were sharing the page,” Dennis said, “so that’s kind of reassuring that I’m not as crazy as a lot of people think I am.”

Dreaming of a cowboy Christmas | Music