In history of Santa Fe Trail, a window to Kansas’ past and our nation’s future

The Kansas Reflector welcomes comments from authors who share our goal of broadening the discussion about how public policy affects the daily lives of people in our state. Dave Kendall served as the producer and presenter of the “Sunflower Journeys” series on public television for the first 27 seasons and continues to produce documentary videos through his own company – Prairie Hollow Productions.

I recently started the production of a. completed Documentation about the Santa Fe Trail, which celebrated its bicentenary in 2021. In doing so, I’ve learned some things, some of which have an impact on the current challenges we face in Kansas and across the country.

In case you’re unfamiliar with the history of the trail, here’s a quick recap:

Six men left the Missouri border in September 1821, leading pack horses with merchandise to be sold in Santa Fe. They crossed in “Indian Territory” when they reached the western border of the new state. (The state of Kansas would not exist as such for another 40 years.)

To the west they reached the Arkansas River near what is now the city of Great Bend in Kansas and followed it towards the Rocky Mountains. At that time, the river served as a in this area our international border with Mexicowhich had just won its independence from Spain.

Eventually they met a contingent of Mexican soldiers who escorted them to Santa Fe, where the governor of Nuevo Mexico was greeted them with open arms. They made a good profit selling their wares, and the next year some returned with a couple of wagons full of goods.

Within a few years, Mexican merchants were also investing heavily in a reciprocal trade corridor between the two nations. The supply chain stretched across the Atlantic to England, France and other European countries.

Native nations were also involved in the Santa Fe trade, working directly with traders, or coming to trade in places like Bents fort.

The privately owned fort on the Arkansas River became a rallying point for “The Army of the West” as it moved down the path from Fort Leavenworth. This was in 1846, during the War with mexico, after which Nuevo Mexico and the entire area west of California became part of the United States.

The war was largely based on the notion of Manifest fate – The view that the United States should have the upper hand in expanding across the continent. The invisible hand of Providence was believed to set the stage for the development of “civilization” according to a divine plan.

It was later also seen as part of the “plan” to evict the plains indigenous people, destroy the bison herds they depend on, and relocate them to less desirable land. 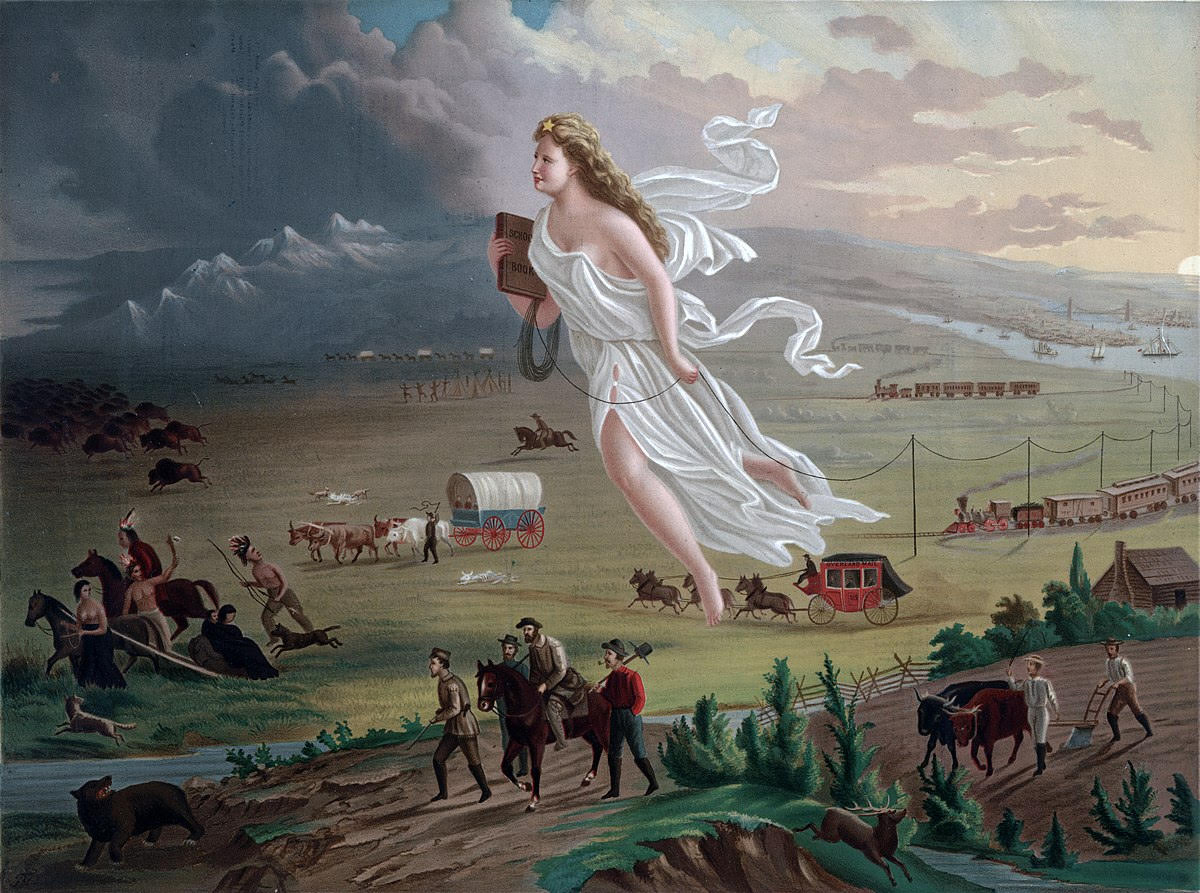 American Progress illustrates Manifest Destiny, the idea that the United States should expand across the continent. The picture from 1872 is by John Gast. (Dave Kendall)

Between the war with Mexico and the Indian Wars, the Santa Fe Trail became embroiled in the “war between states”. The conflict along the Missouri-Kansas border began to heat up before the war, when pro-slavery and abolitionist forces turned violent, defying its image as the emerging state “The bleeding Kansas.”

After the civil war, when transcontinental railroads were built in the middle of the country, the construction crews of the 10th “Buffalo Soldiers” formed at Fort Leavenworth. Men who had previously been enslaved were tasked with fending off those who would soon be forcibly relocated to reservations. 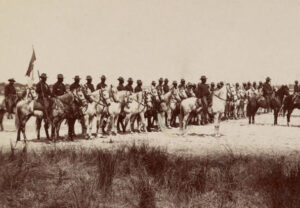 The 9th Cavalry Regiment of the “Buffalo Soldiers” was one of those founded after the Civil War. (Library of Congress)

The active life of the Santa Fe Trail came to an end when the Atchison, Topeka & Santa Fe Railroad finally came to an end arrived in Santa Fe in 1880. The slow caravans of freight wagons could not keep up with the speed and economy of rail transport.

The changes in our country over the six decades that the trail has been in operation have been immense and far-reaching. Particularly noticeable was the impact on the state of Kansas, which contains most of the trail. Yet many, if not most of the Kansans seem to be little aware of their formative influence on our state.

The lessons we could learn from studying the history of the Way and the way different cultures have grown together over these years could be instructive and helpful as we continue to grapple with our multicultural heritage.

However, an important question arises: during this period when schools are closed, will our teachers be able to effectively explore the complex and nuanced history of relationships between peoples of different races and ethnic origins? harassed by angry parents asks how such discussions are organized?

More importantly, our beleaguered democracy will survive the ongoing attacks on our core institutions as those who practice the so-called “critical rage theory” instill fear, suspicion and indignation in the expectation that they will achieve the desired political outcome will deliver?

The fate of our constitutional republic seems to be on the brink. May we learn from the past to prepare for the future.

Through its Opinion Department, the Kansas Reflector works to raise the voices of people affected by public policy or excluded from public debate. Information is provided here, including the ability to submit your own comment.

Dark skies are another draw for New Mexico | Editorials