In fall 2013, La Jolla Playhouse presented its very first Without Walls Festival, featuring about a dozen adventurous, interactive and site-specific theater pieces around the Playhouse campus at UC San Diego.

Nearly a decade later, the WOW fest is still going strong. So strong, in fact that beginning this week, it will transform from a biennial to an annual event. This year’s fest, coming off two years of mostly digital WOW shows, will include a robust 24-show lineup at Liberty Station, the site of its last full-length, in-person festival in 2019. Tickets to many performances at this year’s festival — running Thursday, April 21 through Sunday, April 24 — are already sold out. Fortunately, more than half of this year’s shows are free of charge and many are being presented outdoors.

The Playhouse’s Tony Award-winning artistic director Christopher Ashley said WOW is a favorite project because it reaches a nontraditional theater audience and celebrates the beauty of San Diego.

“The audience response has been so warm and eclectic and diverse and many of them are people who wouldn’t necessarily go to see a play in the theater,” Ashley said. “Going to a yearly format will allow us to explore other nooks and crannies of San Diego. We’ll come back to campus every couple of years and then we’ll explore more of the world of San Diego.”

Ashley said many of the shows being presented next weekend were originally booked for a 2021 WOW fest that never took place due to the pandemic. That gave the artists more time to develop their pieces, and he’s excited to see what they come up with. The lineup includes many San Diego theater artist as well as artists from Canada, Australia, Mexico, France, New York and Los Angeles.

One of the shows he’s most excited about this year is “La Bulle” from the Canadian troupe Corpus. It’s bout a clownlike character who lives inside a giant bubble. Ashley said the show’s creator and performer, David Danzon, got trapped in France when the pandemic began, and he rehearsed it in a field for an audience of French farmers who had never seen theater before.

He’s also excited about “Monuments” by Australian multimedia artist Craig Walsh, who will photograph and interview several San Diego unsung heroes and project their images on trees each night at the WOW staging ground. “It’s very beautiful using a tree as a projection surface for a face. It’s like the person is living inside the leaves of the tree,” Ashley said.

San Diego’s TuYo Theatre will remount its February production of the walk-through theater installation of “On Her Shoulders We Stand,” which celebrates how Latinas in the U.S. forged new identities during World War II. And San Diego’s Blindspot Collective, which wowed with its multistory “Hall Pass” at Liberty Station in 2019, returns with “Black Seance,” an evening show set in a cocktail bar about Black icons.

Finally, Ashley is excited at the large number of free and family-friendly shows that will be presented outdoors, turning the whole Arts District campus at Liberty Station into a living stage.

“WOW programming feels like you’re at an event,” Ashley said. “Everybody is hungry to get back into their lives and into the community of theatergoers. It feels like a good time to be offering an outdoor festival.”

All events take place in the Arts District at Liberty Station from Thursday through April 24.

“Ants” from Polyglot Theatre, Australia: Previously featured at the 2015 and 2019 WOW Fest with its interactive children’s shows “We Built This City” and “Boats,” Polyglot returns with “Ants,” which brings three giant ants together with children who will help the ants transform a public space with lines and patterns. The production will feature Inlet Dance Theatre. 30 minutes. Noon and 1:30 p.m. Saturday and April 24. Hub, North Promenade. Free. 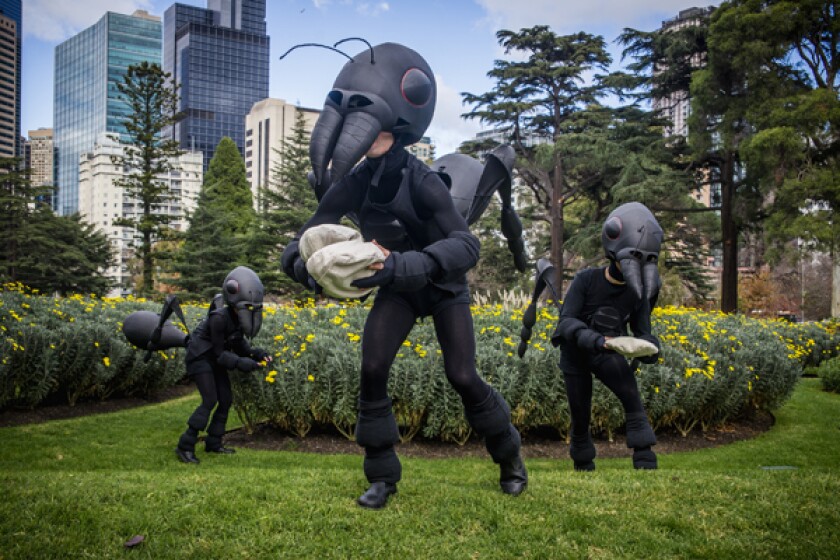 ‘Ascension” from San Diego Opera: Two female opera singers will sing a cappella choral pieces as they leads audience members through the historic areas of Liberty Station. As they walk, their attire will transform, taking them from early 20th-century suffragettes to early 21st-century modern American women. The songs, written by composer Melissa Dunphy and librettist Jacqueline Goldfinger, include “Halcyon Days,” about finding hope in the depth of despair, and “Set Myself Free,” about the freedom women found in America, beginning with the right to vote. 30 minutes. 3 and 5 p.m. Saturday and April 24. Meet at northeast corner of Dewey and Truxtun roads. Free.

“A Thousand Ways (Part 3): An Assembly” from 600 Highwaymen, New York: This is the final piece of an interactive, three-part theater project the Playhouse began in February 2021 as a way to create community between strangers during pandemic-related quarantine. The finale will bring together past participants in groups of 12 to form structures using notecards as an audience watches. 60 minutes. 12:30, 2 and 3:30 p.m. Saturday. Noon, 1:30, 3, 5 and 6:30 p.m. April 24. Dorothea Laub Dance Center, 2650 Truxtun Road, No. 201. $20. 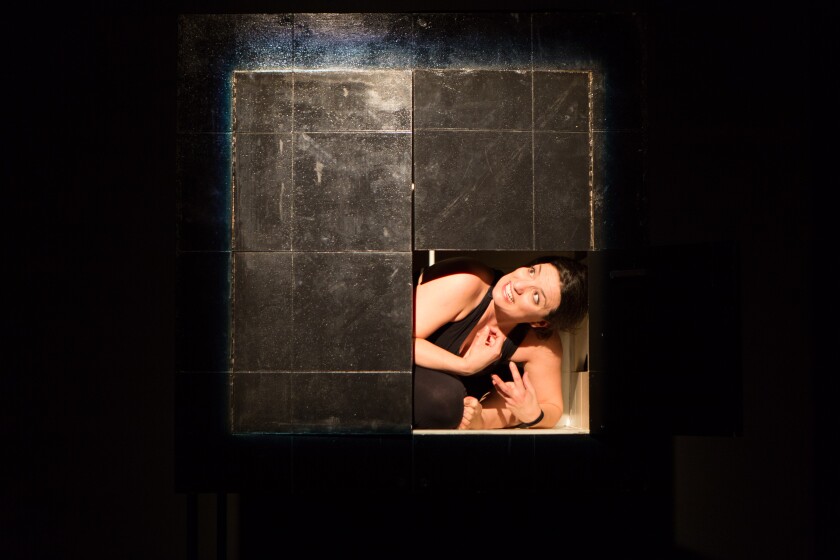 New York actor Dominique Salerno will play 30 characters inside a box in “The Box Show.” 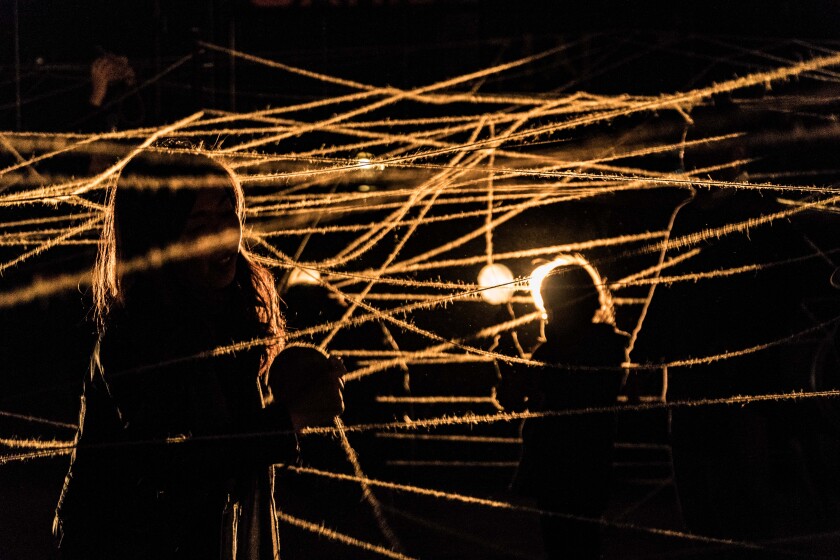 “C’est pas là, c’est par là (It’s not here, it’s over here)” from Galmae, France: This ensemble piece involves creating a large, tangled web of yarn that people create, move through and disentangle. It represents how humans move when they’re alone or in a crowd and how they find their space. 45 minutes. 8:45 p.m. Friday and Saturday. South Promenade Lawn. Free.

“Finding Avi” from Katherine Wilkinson and Elizagrace Madrone, New York: This interactive audio walking tour is geared for young queer audiences. Structured around a familiar Western fairy tale, audience members can make nonbinary decisions and explore the possibility that quests and stories don’t have neat and simple endings. Ages 12 and up only. Up to 90 minutes. 10 and 11:50 a.m., 1:40, 3:30 and 5:20 p.m. Saturday and April 24. Chapel Lawn, 2881 Roosevelt Road. $20.

“40 Watts from Nowhere” from Mister and Mischief, Los Angeles: Audience members enter a DJ booth where they can play music and share their voices in an experiential live documentary on the true story of magazine editor-turned-radio pirate Sue Carpenter, who created an illegal radio station for musical misfits in the closet of her home in the L.A. community of Silver Lake in 1995. Ages 12 and up. 50 minutes. 6, 7, 8 and 9 p.m. Thursday and Friday. Hourly from 11 a.m. to 9 p.m. Saturday Hourly from 11 a.m. to 7 p.m. April 24. Dick Laub Command Center, 2460 Historic Decatur Road. $20 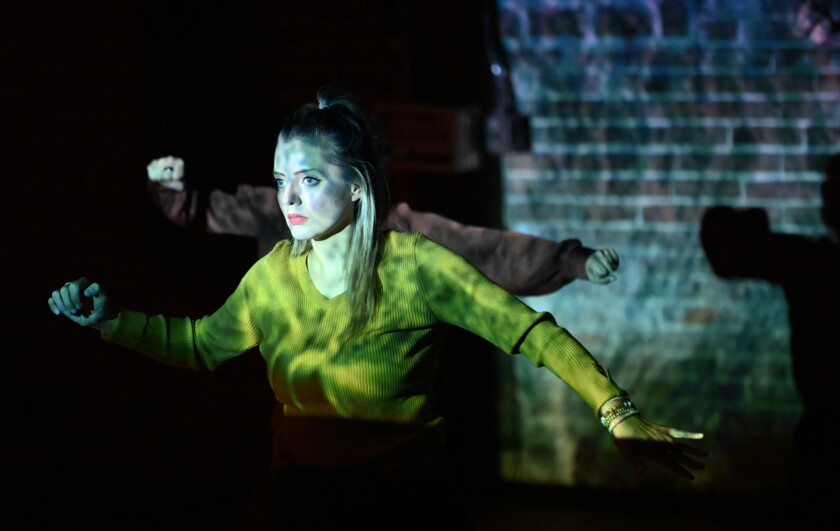 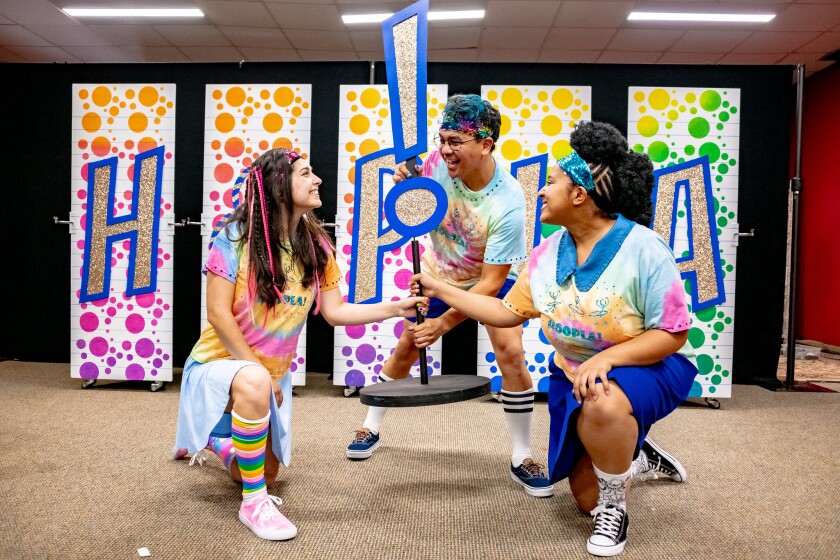 “In Lieu of FLWRZ” from Soulkiss Theater, San Diego: This multisite performance highlights theater, dance and the music of local San Diego-based R&B, soul and hip-hop music artists. It’s about the death of a queer couple’s relationship due to an act of infidelity. 25 minutes. 3:30 p.m. Saturday and April 24. Hub, North Promenade. Free. 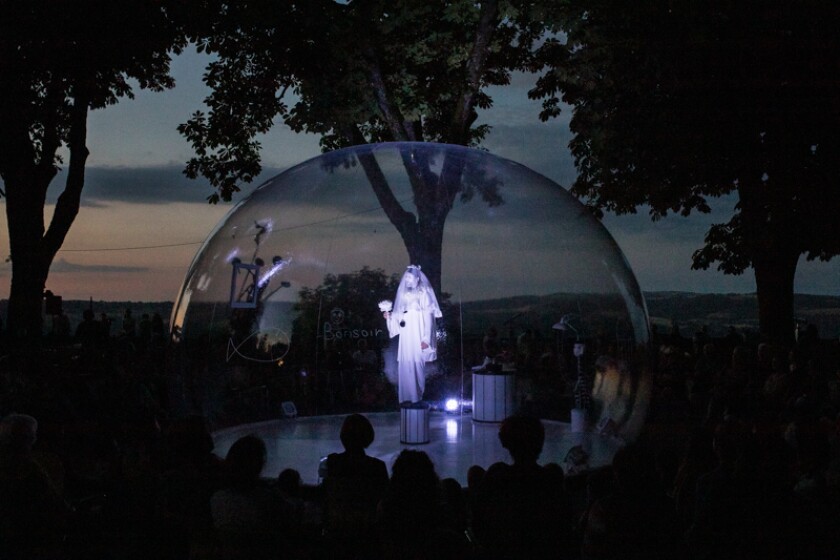 “La Bulle” from Corpus, Canada: Last seen at WOW in 2015 with its show “A Flock of Flyers,” Corpus returns with this outdoor solo show featuring the clownlike character Pierrot, who’s a mime, dancer and artist, performing a show about solitude, dreams and social distancing inside a giant snow globe-like bubble. 60 minutes. 8 p.m. Thursday-April 24. North Promenade. Free.

“Lessons in Temperament” from Outside the March, Canada: Writer-musician-performer James Smith will perform this one-man play about four neuro-diverse brothers, told through piano tuning. Smith and his brothers have dealt with obsessive-compulsive disorder, autism, bipolar disorder and schizophrenia. He tells their story as he tunes a piano onstage, a metaphor for how all humans are tuned differently. 110 minutes. 8 p.m. Thursday. 5 p.m. Friday. 6:30 p.m. Saturday. 3:30 p.m. April 24. Light Box at Dorothea Laub Music & Arts Center, 2590 Truxtun Road, No. 205. $20.

“Monuments” from Craig Walsh, Australia: This outdoor site-specific nighttime projection installation will transform trees into sculptural monuments as a way of honoring the legacies of San Diego’s unsung heroes. Walsh will photograph and interview the subjects for the multimedia installation. Runs from 8 to 10 p.m. Thursday through April 24. Arts District area. Free. 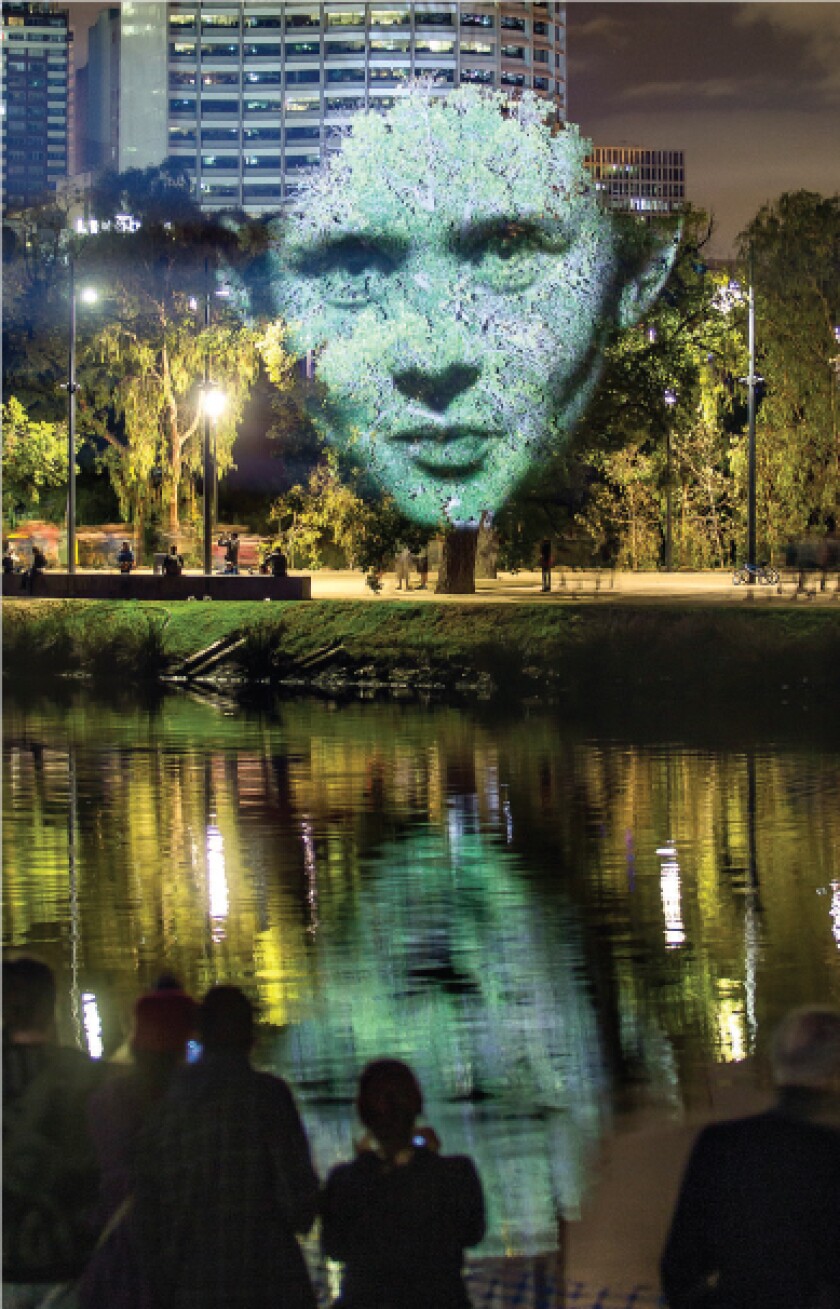 “The Music Sounds Different to Me Now” from Bill Wright, San Diego: This dance and music piece will feature “Jody” throwing her annual party for her gang of singer-dancer friends, who will tap into stories from their lives, both funny and poignant. 60 minutes. 2 and 7 p.m. Saturday and April 24. Dorothea Laub Dance Center, 2650 Truxtun Road, No. 207. $20. 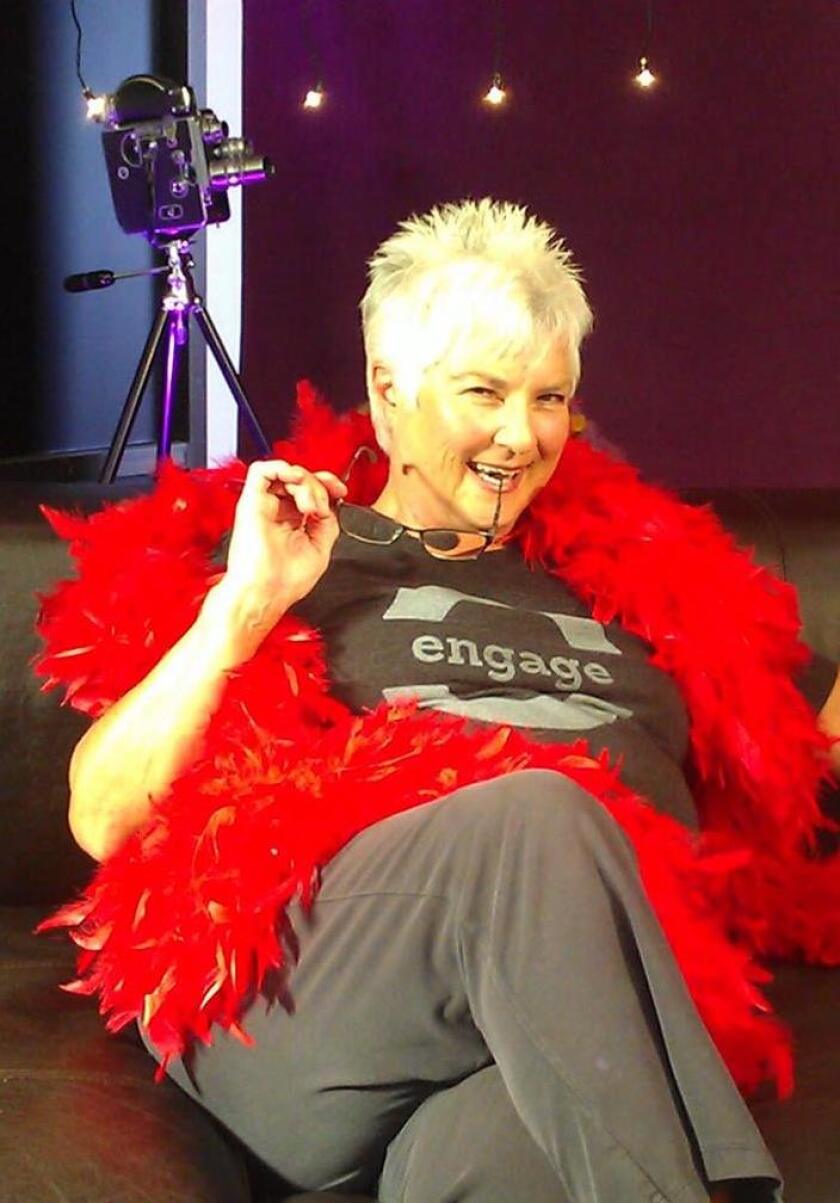 Bill Wright’s “The Music Sounds Different to Me Now” will be presented at La Jolla Playhouse’s 2022 Without Walls Festival.

“The Mystery of Secrets” from San Diego Dance Theatre: Four choreographers will create mysterious and improvisational dance pieces at sites around the festival hub in the Arts District. Besides SDDT dancers, there will be community dancers and performers from Flamenco Sur. 30 minutes. 4:30 p.m. Saturday and April 24. Hub, North Promenade. Free.

“On Her Shoulders We Stand” from TuYo Theatre, San Diego: This walk-through, immersive theatrical installation was first presented by Turnkey and TuYo Theatres in February in Logan Heights. Audience members will hear the stories of Latinas who, though not accepted as Americans during the 1940s, still joined the war effort at home and their experience shaped the women in their families for generations to come. 35 minutes. Tours begin every 20 minutes from 6 to 9:40 p.m. Thursday and Friday. And from noon to 4:40 p.m., Saturday and April 24. Central Promenade, Roosevelt Road between Truxtun and Historic Decatur Road. $20.

Silent Disco: First presented at the WOW Festival in 2019, this fun-to-watch interactive programs allows participants to put on a headset and boogie to music from DJ Chris Freeman that only they can hear. 90 minutes. 8:30 p.m. Saturday. Hub, North Promenade. Free.

“Somnium” from The Rosin Box Project, San Diego: This new ballet centered around and on the architecture of Liberty Station will combine dance, projection mapping and music to create an immersive, multisensory experience. 30 minutes. 8 p.m. Friday. 8 and 9 p.m. Saturday. 8 p.m. April 24. Between buildings 3 and 4, North Promenade. $20. 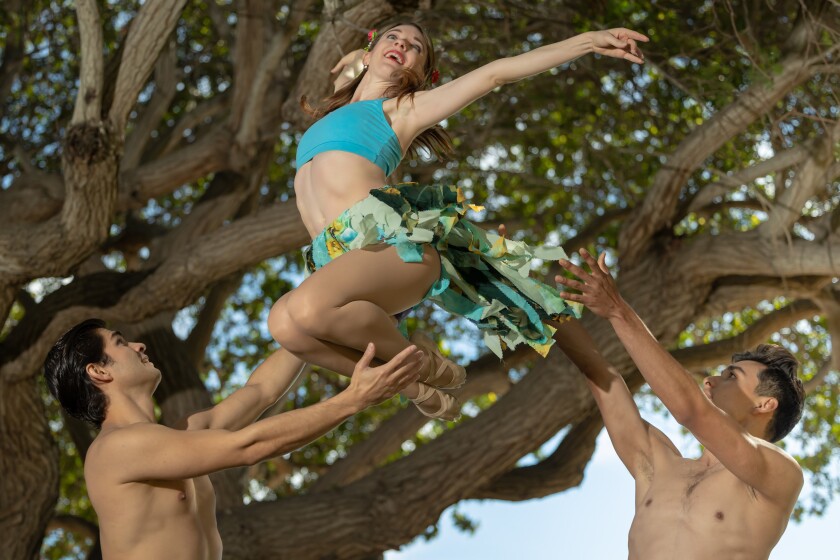 San Diego Ballet “The Four Seasons” will be presented as part of the 2022 Without Walls Festival. 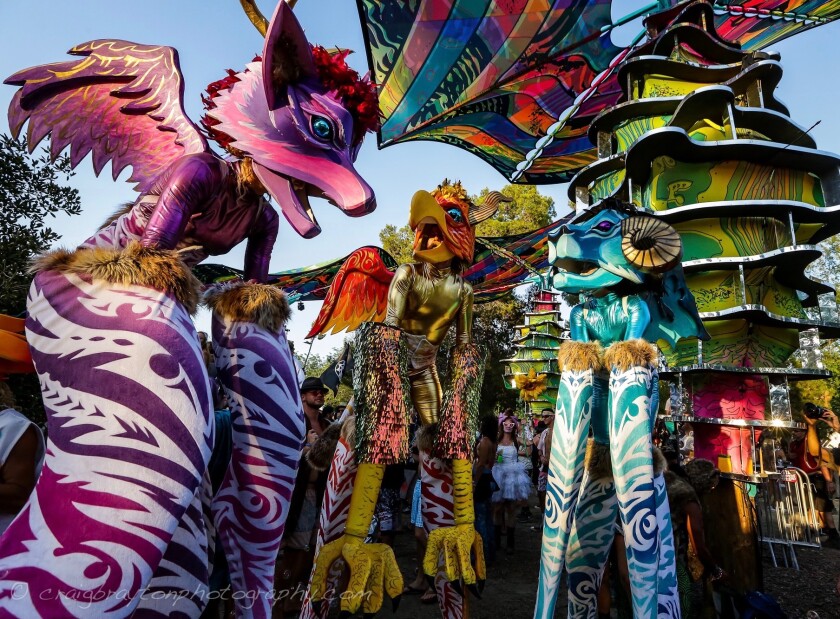 When: Thursday through April 24

When your employees can’t afford to live here