Thanks to San Diego’s proximity to an international border, many of its local theaters have produced plays and musicals over the years about the immigrant experience.

But playwright Andrea Thome said that too many of the immigrant stories she has seen portrayed in the American media focus on their suffering and struggle. Her play “Fandango for Butterflies (and Coyotes),” which opens Tuesday, Aug. 30, in its West Coast premiere at La Jolla Playhouse, instead celebrates the strength, resilience and imagination of immigrants who come together one night for a fandango celebration at a New York community center.

Thome, whose parents are Chilean and Costa Rican-American, said immigrants do suffer in their journeys to America as well as their assimilation process, but that’s just one piece of who they are. And fandangos — joyful multicultural gatherings of improvised song, dance and storytelling — celebrate immigrants’ bravery, triumph against the odds and their shared experience.

“I see immigration as a radicalization of imagination,” Thome said in a recent interview. “You have to imagine your life in a place you’ve never been, and you have to draw on that store of imagination to get you through what can be a very difficult journey for some people. Fandangos celebrate that imagination, creativity, community and solidarity.”

Produced by New York’s En Garde Arts, “Fandango for Butterflies (and Coyotes)” made its world premiere in February 2020 at the La Mama experimental theater club in Manhattan’s Bowery neighborhood. The show’s originally planned five-borough city tour was interrupted by the pandemic, but it resumed last fall. Since then, the En Garde Arts production has traveled to Penn State and the University of Maryland. In keeping with En Garde’s site-specific ethos and the play’s subject matter, the La Jolla Playhouse run will be followed by a week of free shows at community centers in Chula Vista, San Ysidro, Escondido, Oceanside and more, as an outreach to the county’s immigrant communities.

“It’s a celebration of indomitable immigrant communities — people enthusiastically gathering to sing and share stories, even in the midst of a threat that lingers just outside their walls, underscoring humanity’s intrinsic need for connection,” Ashley said in a statement.

En Garde Arts was founded in 1986 by Anne Hamburger. In 1999, she closed En Garde to accept a position as artistic director of La Jolla Playhouse, but she left after just one year for a top creative post in Disney’s theme parks division. She returned to New York in 2008 and relaunched En Garde in 2014. 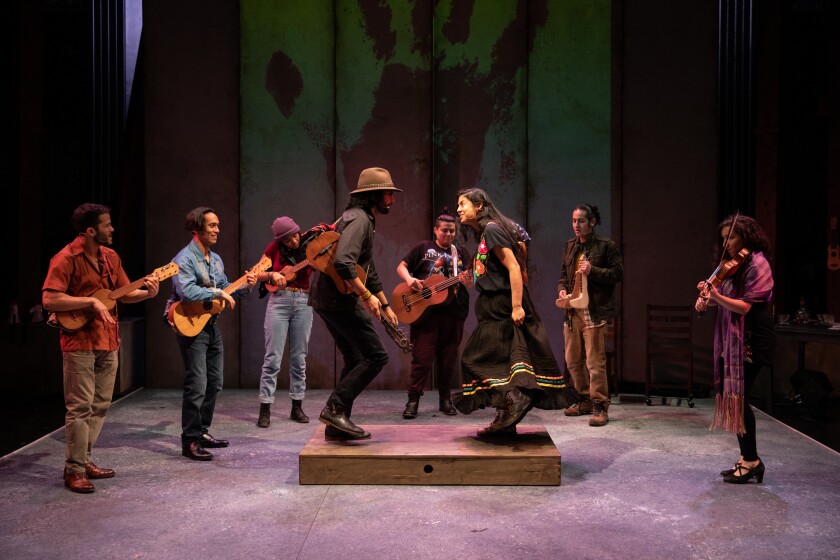 Thome said Hamburger reached out to her in spring 2017 and asked if she’d be interested in developing a play based on interviews with undocumented immigrants in New York. Intrigued with the idea, Thome began interviewing friends and acquaintances who — like herself — came from immigrant backgrounds. After gathering 15 stories from a variety of Latin American immigrants, she presented the play’s first reading in November of that year.

It was a straight, verbatim documentary-style play with a little music mixed in, but the six central characters had no interaction or relationship with one another. To give the play more of an interactive narrative, Thome worked with composer Sinuhé Padilla and director José Zayas to tell the now-fictional characters’ experiences at a fandango event.

The fandango tradition originated about 400 years ago in the region of Veracruz, Mexico, though similar events occurred earlier in Spain and Africa. Because immigrants in Veracruz spoke different languages ​​and dialects, they found a common language when they gathered together for an evening of music, dance and storytelling. The folk music style that originated in Veracruz is known as son jarocho. Immigrants would gather around a wooden platform, play instruments, sing in Spanish and other languages ​​and rhythmic tap-dancing, a style that has carried on to this day. 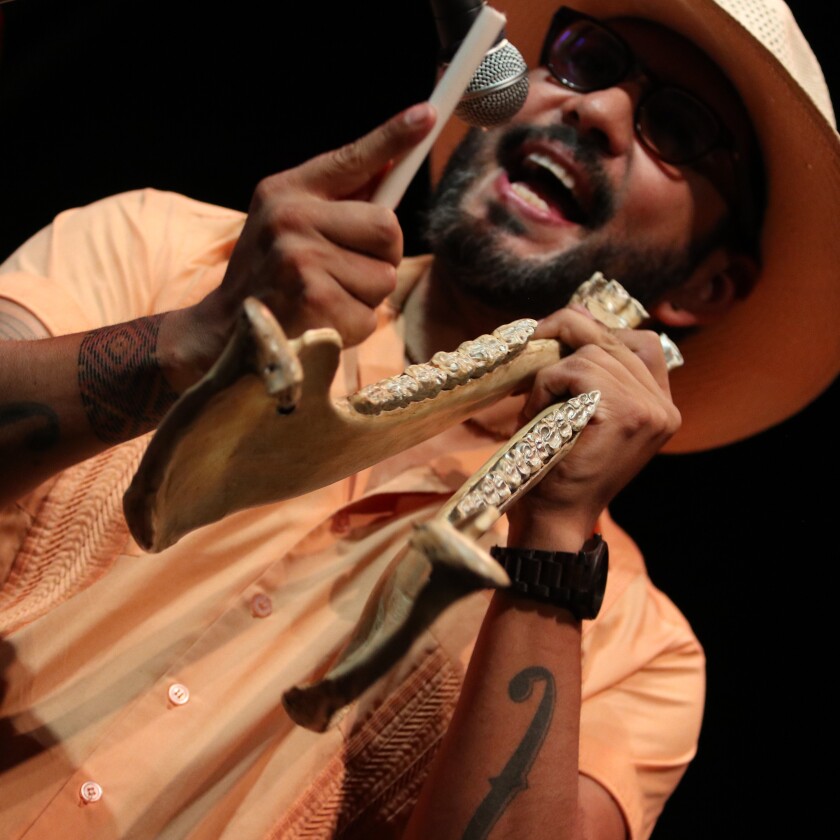 Sinuhé Padilla is the composer and lead musician in En Garde Arts’ “Fandango for Butterflies (and Coyotes),” opening Aug. 30 at La Jolla Playhouse.

Padilla said that while there is a vibrant and world-famous fandango culture in Veracruz, contemporary fandangos communities have popped up around the world, including Japan, Europe, South America and New York City. There’s also a long-running fandango Fronterizo festival that’s staged each year at the Friendship Park wall between San Ysidro and Tijuana.

“Fandango for Butterflies (and Coyotes)” takes place at a community hall where a group of immigrants from Latin America have gathered for a fandango. There they await news of loved ones who have yet to arrive in America, celebrate the return of family members and worry about those who may have been caught up in immigration raids, like the one that is expected the following morning. The play’s lead character, played by Jen Anaya, is “Mariposa,” the Spanish word for butterfly. Although Mariposa is a fictional character, many of the stories the characters tell are drawn directly from Thome’s interviews with Mexican, Honduran and Dominican immigrants.

Padilla said that because the play has been produced at different site-specific locations and the cast changes from time to time, the show changes slightly from night to night, in keeping with the improvisational nature of fandango. The stories and score are bilingual, but live translations are projected onstage in both English and Spanish. And at the end of each performance, the audience is invited to join the fandango cast either onstage or outdoors, if they choose.

Thome said reactions to the show vary, depending up on the audience members’ personal experiences.

“We see a lot of tears, a lot of laughter and a lot of emotions about feeling represented,” she said. “There’s also a feeling of freedom afterwards. The fandango allows you to free yourself.”

‘Fandango for Butterflies (and Coyotes)’ 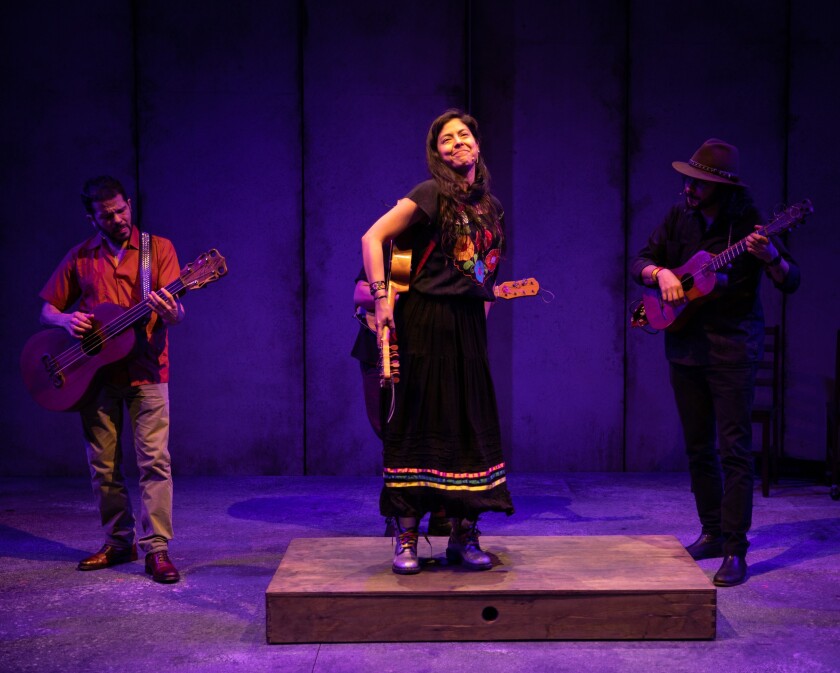