When field hockey 2021 kicked off in Avocado West on Wednesday afternoon, October 6, Torrey Pines met in the dwindling moments of regulation to beat Canyon Crest Academy 2-1 in a meeting of arguably the best teams in the league.

Depending on which poll you prefer, Torrey Pines and Canyon Crest rank 3rd and 4th in San Diego, respectively, and both consider themselves post-season CIF title contenders. The win raised Torrey Pines to 12-3 that season, while CCA dropped to 10-5. It was the Falcons’ second decision over the Ravens that year (the first was a 2-1 result on September 25 at the Canyon Hills Tournament) and their sixth in a row.

Torrey was out of the game from the start but, despite the control of the game and numerous chances, couldn’t score as the first quarter ended goalless. The Falcons kept one foot on the pedal, but by the middle of the second section, Canyon Crest seemed to take hold and things got competitive.

With 8:40 remaining in the half, CCA Crew First Blood. When the Torrey Pines defense whistled after a clearing game, the ball landed on the stick of senior co-captain Jessica Connell, who took a touch to catch a corner and then sent it past goalkeeper Bella Anfuso. It was the second season for Connell, who played with a broken bone and a cast on her right hand.

“It was very frustrating,” said Courtney Spleen, Torrey Pines third-year head coach, of the team that gave up the first goal. “We came out really hard, drove at a high pace in the first 15 minutes and put a lot of pressure on early on.

“We had a lot of chances, but had some problems finishing. I think that was their first shot on goal. “

It only took Spleen five minutes to equalize. After a penalty corner, junior midfielder Smilla Klas fired a missile from the top right circle. The ball bounced off Elderly Katherine Cunningham’s stick and into the top left corner of the goal. At the break it was still 1: 1.

The second half was much more even as the teams hit back and forth and both made dangerous attacks on the opposing goal. Perhaps the key game of the game with zeros on the clock happened at the end of the third quarter.

Canyon Crest had earned a corner before the buzzer and awarded a penalty shot when played. Senior Andie Gately, the 15-goal team leader, fired a solid shot that bounced off the left post, sending the teams into the final 15 minutes that were still one. 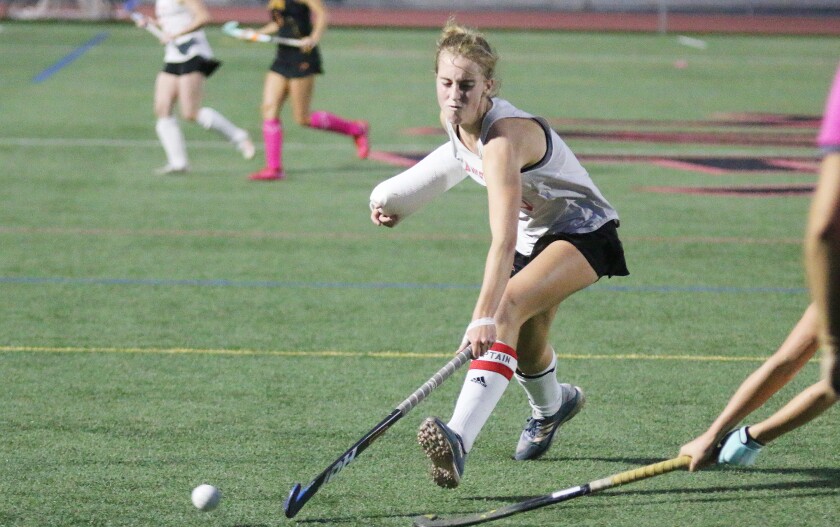 “I think this missed stroke really helped us a lot,” said Spleen afterward. “It was a good way for us to end the quarter and as we have had problems playing from behind at times in the past, it gave us confidence.”

But when time was running out, it seemed that overtime would be in the forecast. But less than two minutes to go, Klas struck again and made another bang near the Raven Gate. This time it was Senior Mika Horton who caught the ball, turned to the goal and went into the cage with her ninth goal of the season, this time a game winner. Klas, an unmistakable force who paced the park throughout the game, admitted that he was simply successful on offense.

“A little bit of it just fires on the net,” she said. “I try to formulate the goal and just get it there. I think that puts a lot of pressure on the goalkeeper and the defense. When you do that, good things usually happen. “

Overall, it was a fun game. Torrey Pines appears to have a size / athletic advantage while Canyon Crest can be a little faster and a little more experienced. The X factor that separates the rivals could be Klas and her older sister Philine, who anchors the Falcon defense from their center-back position. When they get rolling it is hard for CCA or others to keep up. At crunch time on Wednesday, Spleen made sure her two largest guns were in the front and center.

“I’m not going to lie until we have scored the last goal, I was really nervous,” smiled Spleen. “We needed additional pressure, had to fire more shots – had to score.

“I wanted Philine and Smilla to get us to pick up the pace in the final quarter. They are great players and they play great together. Sometimes I have to get them to be a little more selfish, especially when I’m taking advantage of each other when attacking. They are usually more defensive players and there is likely to be some hesitation. “

Canyon Crest Head Coach Kiana Duncan knew the two teams would meet again (Wed. Nov. 3). “It burns, luckily we still have a chance,” said Duncan. “It seemed like we were ready to go, but when the game started we were a little shy and Torrey Pines was on our tail – if you give them the chance to shoot it will eventually go into the net.

“If we had played the first half the way we played the second, the result might have been different. After half time we talked more, moved faster and used our skills. We all have to be ‘on’ at the same time in order to be successful against other top teams. “

For her part, Spleen was impressed by what she saw of both squads. “CCA has an excellent team this year that are very competitive and it’s always a great game between the two schools,” said Spleen. “They have a lot of strong players and, perhaps more importantly, a lot of strong leaders, especially in the midfield. They want to win and that makes them a dangerous team.

“That was a big win for the league, but also for the CIF ranking. We showed tonight that we can win if we don’t score first and things don’t go our way. We never lost our composure. “

Torrey will be back at home against Rancho Buena Vista on Wednesday, October 13, while CCA greeted Westview on the same day.

After 20-month absence, Lady Braves can compete in Class 3A | Sports