Trail connections include the new pedestrian suspension bridge under the freeway at Manchester Avenue, over the enhanced lagoon. The bridge is part of the seven-mile North Coast Bike Trail from Solana Hills in Solana Beach, which continues onto new paths along Manchester and Birmingham Drives in Encinitas.

With the suspension bridge now open, visitors can now take on a three-mile loop from the San Elijo Lagoon Nature Center on Manchester, a trail that connects Cardiff to Solana Beach with possibilities to get to the beach, wander the Harbaugh Seaside Trails, adventure into Annie’s Canyon Trail and experience flourishing lagoon life up close.

The new suspension bridge under the freeway.

The San Elijo Lagoon Restoration is one of the largest wetland restorations in California, revitalizing the wetland to more optimal health with its tidal channels now wider, deeper and extending farther inland. The lagoon’s environmental enhancements and new trail connections were made possible by the Build North Coast Corridor highway and railroad improvements that began in fall 2017. The half-cent Transnet tax funded the $120 million undertaking.

“Thirty-five years ago, we had this vision that San Elijo Lagoon Ecological Reserve could be restored,” said Doug Gibson, Nature Collective executive director and principal scientist. “This area is a jewel in the crown of the San Diego region, and it’s our duty to protect it as best as we are able. Nature Collective and the TransNet Environmental Mitigation Program investment will support stepping stones for all to enjoy for many generations.”

New bridges near the Nature Center allow visitors a unique perspective, a chance to look down into the lagoon—if you’re lucky you might catch a stingray or sea lion. With the restoration, water quality and oxygen levels have greatly improved with the increased tidal flows and the widened channels have brought in an abundance of plant and animal diversity.

“Think of the main tidal channels as the lungs of the lagoon,” Gibson said. “With every incoming tide, it’s like the lagoon takes a deep breath and today, three times as much water is coming in than before restoration.” 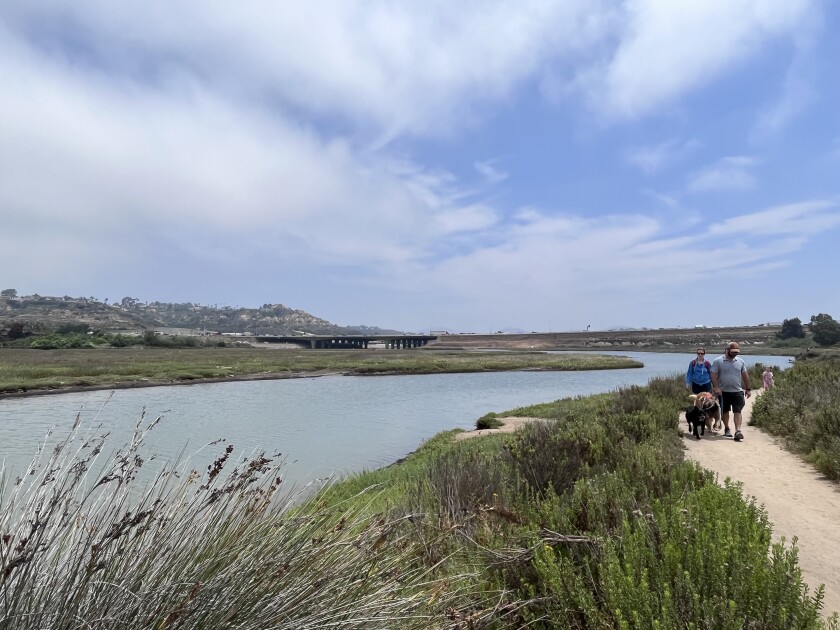 Walkers on the loop trail.

Nature Collective scientists observed the first octopus in the lagoon channels since work began more than three decades ago and discovered five new fish species never before seen. Endangered species such as the Belding’s Savannah Sparrow, Ridgway’s Rail and California Least Tern have also been observed.

Eelgrass is also now thriving in the lagoon, visible in bunches from the bridges. “Eelgrass is a fish nursery heaven,” said Gibson of the underwater plant that serves as a sheltered habitat for fish like halibut to grow up.

Prior to the restoration, they had observed just one patch of eelgrass and now there are 150 patches as the enhanced tidal flow is making it possible to naturally propagate.

“It’s an indicator that what we did is working,” said Jennifer Bright, associate director of Nature Collective.

The Nature Collective is now focused on monitoring many indicators of the restoration’s success, studying various aspects and data sets of the lagoon.

The monitoring is extensive—with post-construction funding from SANDAG, they will continue to monitor the elevations of refuges, species, and tides of the lagoon as a wetland prepared for a future of sea-level rise and climate change through 2031.

Nature Collective is also monitoring the beach replenishment projects on Cardiff State Beach and Solana Beach for a report to California Coastal Commission.

They conducted the most comprehensive surf monitoring study that’s ever been done in California, to show that there were no impacts to the breaking reefs, understanding that wave quality sustains surfing communities and economies. A Nature Collective scientist surfer surfed 2,800 waves in two years using GPS-attached boards (short, long and paddle) to collect data. The Nature Collective monitored zones, wave heights and rides and the study showed no change between pre- and post-sand replenishment conditions.

The scientist surfer tasked with the job was Cardiff native Tim Stillinger—Gibson remembers teaching him when he was a young student in Cardiff School; now he serves as Nature Collective’s science director. 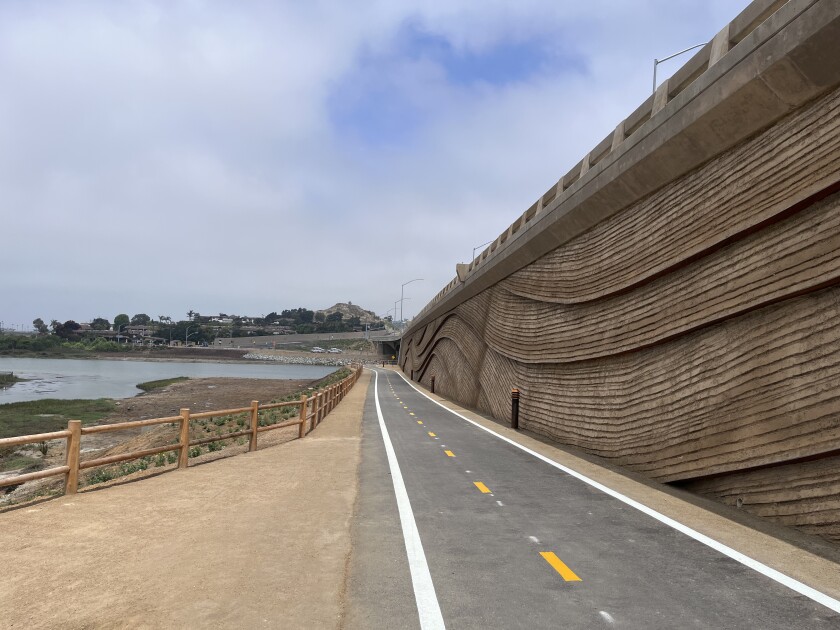 The new North Coast Trail along I-5.

Nature Collective’s next big project is Fields of the Future, 95 acres of open space overlooking the restored lagoon, near the Caltrans park and ride on Manchester, some of which was used as a staging area during the highway project.

Plans for the property, also known as “the strawberry fields” include new trails, community gathering areas, an outdoor classroom, natural-inspired sculptures and an expanded native plant nursery to enhance more habitats while also providing an accessible place for people of all ages and abilities.

Nature Collective’s goal is always to get people out into nature, to engage and connect with it, to experience and to learn. Since the new bridges opened in fall 2020, they have seen the lagoon area become even more activated with the Cardiff and Solana Beach communities finally connected.

Last Friday the lagoon loop trail was alive with groups of people, children and dogs, birdwatchers and runners, all exploring and enjoying.

“It’s been incredible,” Gibson said of the increased activity. “It’s important to provide access for all, to give people a chance to experience it and to give a chance to fall in love. Because once you fall in love, you’re going to want to protect it.”

For more information on trails and the lagoon, visit thenaturecollective.org 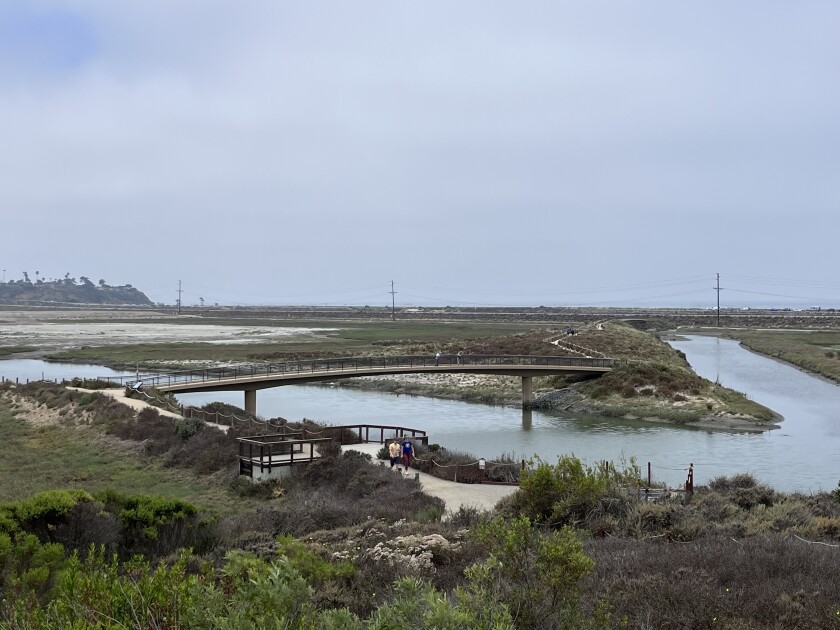 A view of the enhanced lagoon from the nature center.

StormTRACK Weather: Some showers this morning before three conditions move in