An explosive start and flashy performances by its two top scorers propelled the Santa Fe Christian boys basketball team to a 74-68 victory over visiting La Jolla Country Day Tuesday night, Jan. 24. The triumph upped the Eagles’ season record to 18-4 overall and 7-1 in Coastal League play. LJCD dropped to 17-7/9-1, meaning if both teams win out, they would tie for the league title.

Eight days earlier, in its own gym, La Jolla Country Day blitzed SFC in the second half en route to posting a 74-55 win in a contest that was tied at halftime.

In the rematch, the Eagles came out firing with senior Drew Bickley draining a trey from well beyond the arc for the game’s first points and the first of 10 triples the home team would net in the first half. Nearly everything went right for Santa Fe Christian in those first 16 minutes as they augmented their sharpshooting (8-of-9 three-pointers in the first quarter alone) by pushing the pace, ball-hawking on defense and snatching nearly every 50-50 ball (they were +10 on the boards for the night). Meanwhile, the Torreys couldn’t buy a basket and had no answers for the intensity of the hosts on either end of the floor.

It was 30-14 after the first quarter and 46-20 at the break. Prior to tip-off veteran SFC Head Coach Chad Bickley (Drew’s father) had hoped his team would come out with a different energy level than it had in the previous encounter, saying he was “anxious in a good way.” He wasn’t surprised at what he got.

“This was absolutely what I expected tonight,” said Bickley post-game. “This is what we did Saturday (a non-league defeat of Victory Christian) and we had a great day of practice Monday.

“How you practice and how you’ve been playing, you create those habits. We didn’t have them a couple of weeks ago—tonight we did.” 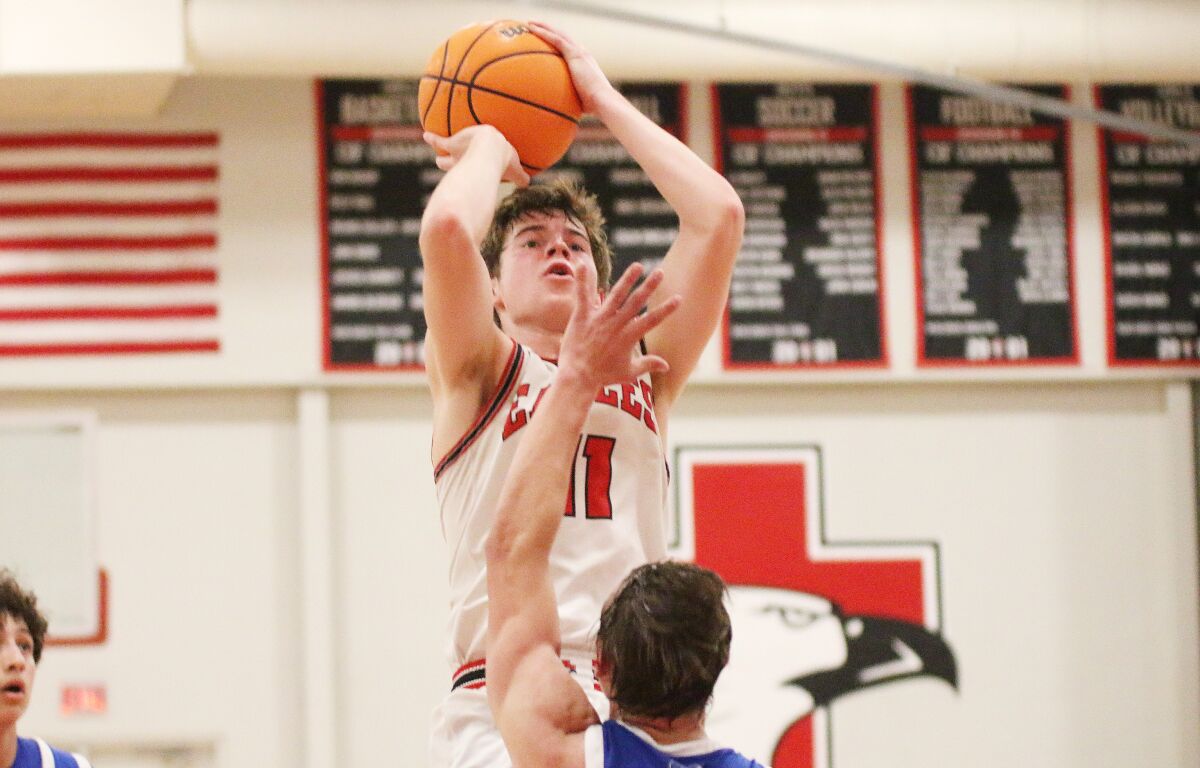 The Eagles’ leading scorer was junior Brycen MacKenzie with 34 pts.

“It’s huge, having two guys like that on the floor every night,” said Bickley. “I mean the object of the game is to score and you’re never out of a game when you’ve got guys like that who can score.

“But it is a team game and everyone complements those guys—they help them get open and vice-versa. Jeremy Love’s defense was something that caught my attention tonight. Their No. 1 (Anthony Aruffo) was dominant last time. Jeremy was a big part of us being able to contain him a little bit better.”

Love chipped in with seven points, seven rebounds and three assists. He combined with SFC’s other two starters, senior Daniel Greathouse and junior Greyson Mundis, to hit 8-of-13 field goal attempts (SFC was 58% from the floor on the night). The 6-foot senior believes that the team’s understanding of each others’ roles is integral to its success. 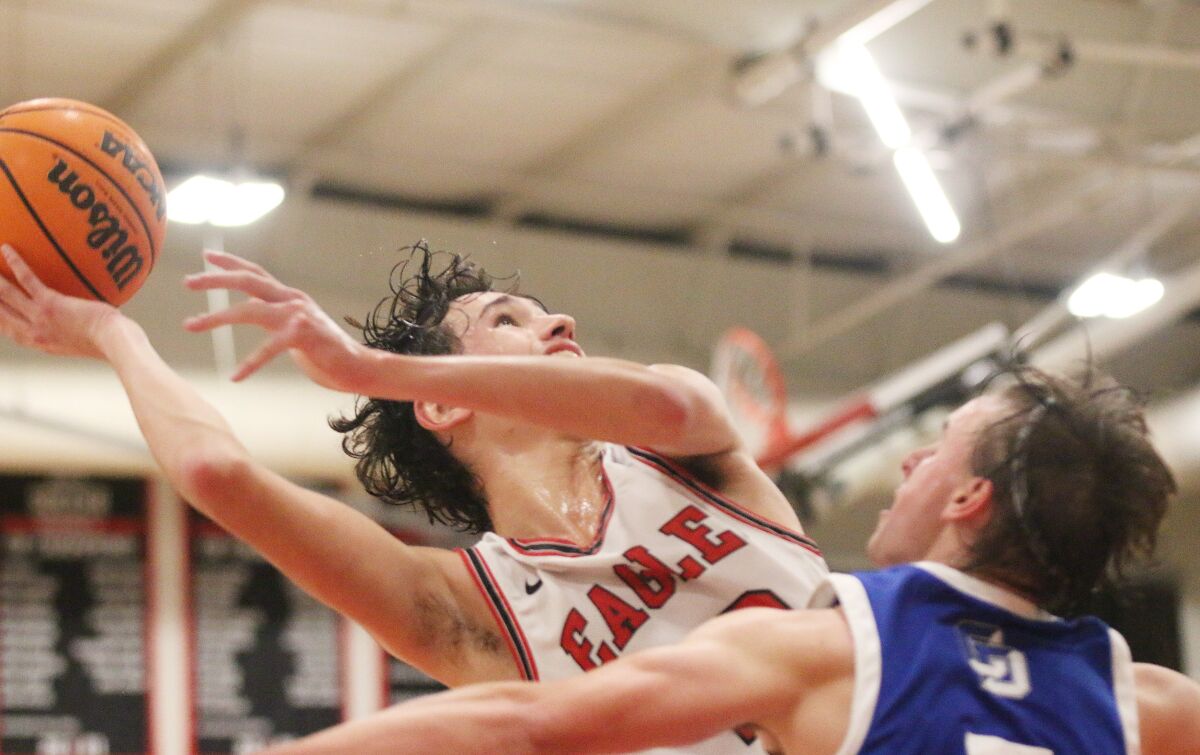 “Brycen and Drew are big time scorers, that’s their role and they have that mentality,” said Love. “But the game’s not just about putting the ball in the basket individually.

“You need to do the things that will help elevate the team to your highest capability. For me, I try to come in with the mindset that I need to be the best defensive stopper on the court.”

The tempo slowed some in the third quarter but the Eagles were able to maintain their advantage, heading into the final eight minutes up 64-37. They pushed the margin to 31 points, at 74-43, with just over five minutes remaining which is when things got a bit surreal.

Led by 5-11 sophomore Chris Carillo, who scored 21 of his team’s best 29 points in the final quarter, La Jolla Country Day tallied the final 25 points of the game. The Torreys actually had possession with 20 seconds left, trailing by five before Santa Fe Christian was able to shut the door. 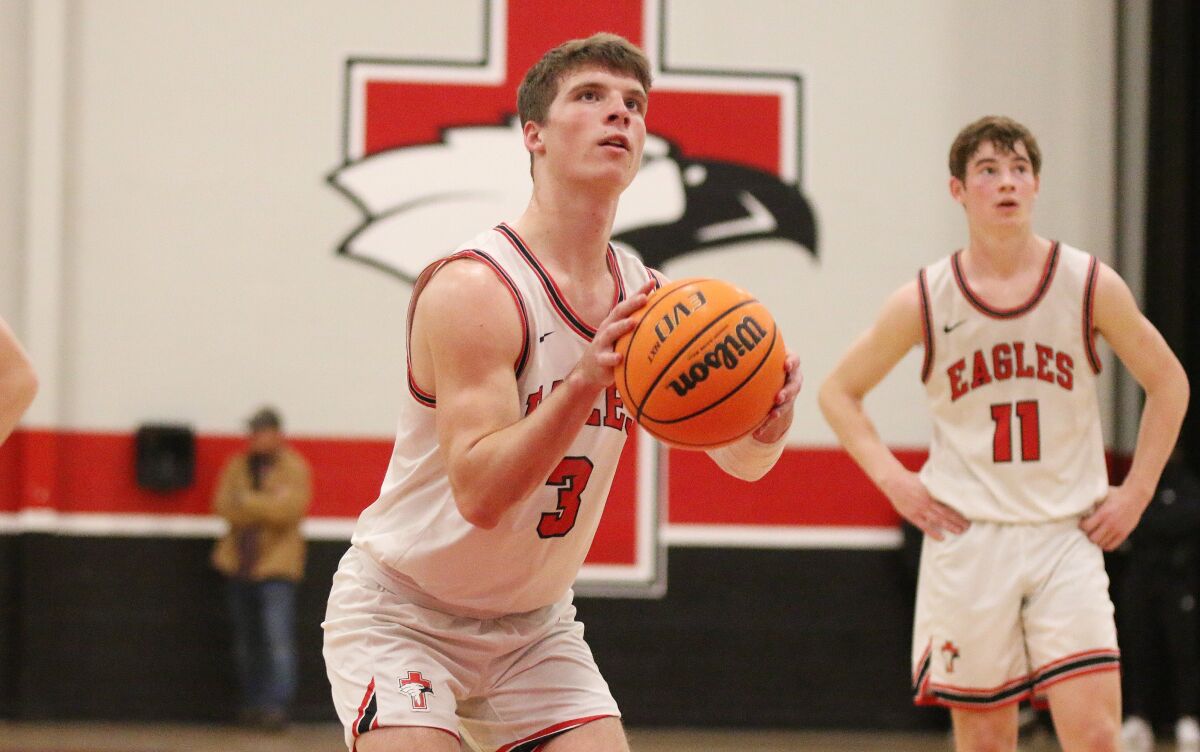 “That’s definitely going to teach us how to close out a game,” said Love. “We played a good first three quarters but you just don’t want to end it like that so we need to keep locked in and make sure we never get too comfortable against any opponent—I’m sure we’ll be working on that in practice.”

Regardless of the way it finished, the result was huge for Santa Fe Christian, not only putting them in position to effectively defend their league crown but enhance the possibility of earning a spot in the eight-team CIF Open Division bracket. SFC and LJCD, 10th and 12th in the most recent MaxPreps rankings, are both on the fringe of being in consideration. And the context of post-season play provided a reason for Bickley to see the positive in his squad’s late-game issues Tuesday.

“All these games are preparing you for the end of the season, so it was actually a little bit of a blessing in disguise,” said Bickley. “You can play a great game but walk back to the locker room and know you’ve got some things to work on.

“The mood off the locker room was a lot better at halftime than it was at the end of the game. There’s a standard of how we play and we didn’t finish well. We all know we’ve got to come back and fix that.”