Shipments of nuclear waste to the nation’s only deep geological repository for the hazardous material show no signs of slowing in the coming years, despite the current permit calling for the plant to begin closing in 2024.

The future of shipments to the Waste Isolation Pilot Plant east of Carlsbad was the subject of debate and scrutiny during a meeting among a state legislative committee Friday in Clovis. The site stores waste like clothing, rags, soils and tools contaminated with radioactive elements due to nuclear weapons research and assembly in places like Los Alamos National Laboratory and Idaho National Laboratory.

WIPP leaders are seeking renewal of the 10-year permit that allows the site to continue receiving shipments, plus the state’s approval of an expansion of the plant to store more waste. But advocates closely watching the plant for decades say such approval could open the door to an unending stream of radioactive waste transported across the country into New Mexico.

So far this fiscal year, WIPP has received 190 shipments. The material arrives from about 10 sites across the country, shipped in large drums on semi-trailers along state roads and interstates. The site has received more than 13,000 such shipments since 1999. When the waste arrives, and if it meets meets WIPP’s safety standards, the material is “emplaced” for permanent disposal in one of eight large panels a half-mile below ground that are sealed when full.

The 1990 federal law that allowed WIPP to be created and an agreement between the state of New Mexico and United States Department of Energy permits the site to permanently hold up to 175,000 cubic meters of the waste.

But WIPP needs more space to fulfill that mission, said Reinhard Knerr, manager of the DOE Carlsbad Field Office. Six of the eight panels are sealed, despite the facility having only disposed of 40% of the 175,000 cubic meters it can receive.

He said in a presentation that  “waste packaging and emplacement inefficiencies” contributed to the bind WIPP finds itself in, likely referring to the premature closure of the first disposal panel in 1999, plus the fallout from a 2014 truck fire and radioactive release that resulted in about one and a half more panels being closed without being filled.

So WIPP is seeking to build two new panels for upcoming shipments, but they’ll need approval from the New Mexico Environment Department. Panels are built by mining more space in the WIPP footprint. WIPP sits in a 250-million-year-old salt bed deemed ideal for nuclear waste storage.

“We additionally are doing mining out to the west, so that if we were able to get those panels permitted by NMED we’ll be in a position to begin mining those panels at the time such approval might come through,” Knerr told members of the Radioactive and Hazardous Materials Committee.” 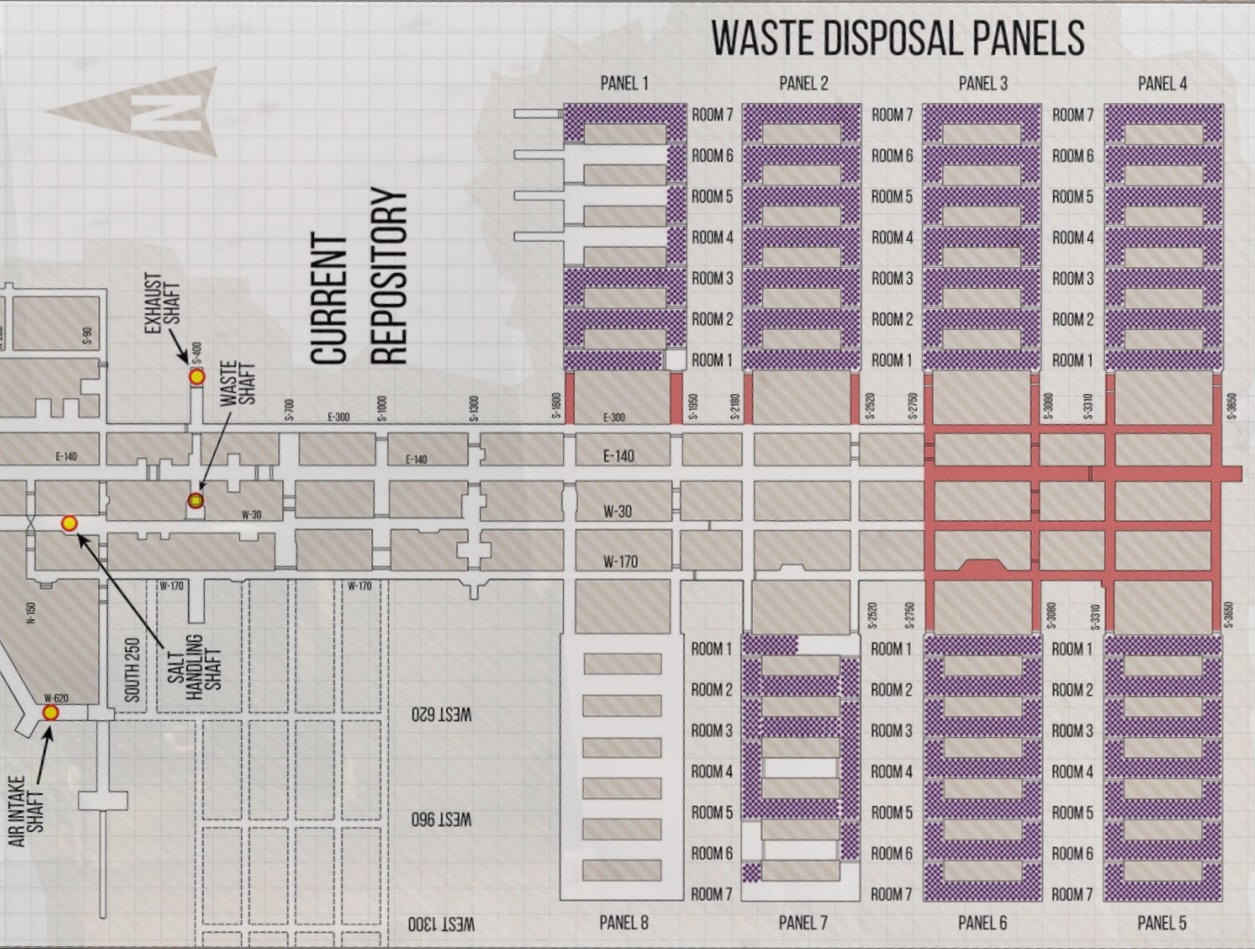 This slide from the DOE’s presentation shows the sealed panels, including those partially full, following a radioactive release in 2014 and a delay in 1999. (Slide Courtesy DOE)

But Don Hancock, who runs the nuclear waste program at the Southwest Research and Information Center, said WIPP leaders are seeking to abandon the principles set out when WIPP began. He also fears the DOE is trying to prime the site to become the nation’s only recipient of this kind of radioactive waste for years to come.

Hancock testified Friday that WIPP was meant to be a site that would permanently dispose of waste only until new repositories would be opened up across the country. The legislation creating WIPP says it would store “up to” 175,000 cubic meters, he noted, and he said lawmakers at the time fully expected that the site could be decommissioned without being filled completely.

But instead, other potential sites across America have been identified but not opened in the intervening years, Hancock said, and an official told him recently at a public meeting that the DOE currently had “no plan” for a waste repository elsewhere.

“WIPP is the only repository. It was supposed to be the first, but not only. Other repositories are necessary for legal reasons, agreements with the state of New Mexico, technical reasons,” Hancock told lawmakers. “But now the Department of Energy is saying they have no plan for any other… waste repository.”

Hancock said the state should use its role to push the Department of Energy to open up other sites elsewhere and should push for specific closure dates when the permit comes up for renewal. He also is asking the state Legislature to push for more transparency from the DOE and more public involvement.

The state is hoping to have a revised permit for WIPP by May of 2023, a state official told the panel.

Hancock said the DOE has no longer even offered a potential closure date for WIPP in any of its recent permit applications. That’s another tell, he said, that shows the DOE no longer has any interest in finding an alternative to WIPP.

The New Mexico Environment Department recently asked the feds to provide a potential closure date. The DOE said it could take as long as 2083 for WIPP to dispose of all current and projected waste being produced across the country.

Hancock, speaking to Source New Mexico after the meeting, said the fact that DOE is being coy about the eventual closure of WIPP should concern generations of New Mexicans.

Knerr, pressed about the issue during the committee meeting, said the 2083 date was just an estimate based on waste amounts being generated and projected at “waste generator” sites across the country. But he noted that it’s taken about 20 years to get WIPP at 40% of the capacity it’s allowed, so it’s reasonable to think it’ll take about 30 more years to fill the site.

A 2020 analysis by the National Academies of Sciences found that all waste that has been generated or is planned to be, will exceed WIPP’s legal capacity by at least 10%. That’s another issue the DOE has not responded to publicly, Hancock said.

The bi-partisan legislative committee, made up of state senators and representatives, ultimately voted to send a letter to the Department of Energy asking questions about shipments and seeking more transparency.

At This Recovery Center, Police Cope With the Mental Health Costs of the Job