“These are like Afghanistan,” he said on a recent drive through Las Cruces, gesturing toward the range’s jagged peaks.

Any similarities pretty much stop there. This new city, state and country — Amiry’s home for the last several months — are deeply unfamiliar and, so far, quite unwelcoming, he said.

Amiry and about 200 other Afghans have tried to find a new life in Las Cruces in recent months, what they hoped would be the final leg of a harrowing journey from a country in collapse.

But in New Mexico’s second-biggest city, Amiry and 15 other refugees who spoke to Source New Mexico say they’ve encountered unnecessary obstacles in meeting basic needs, plus failures by every level of government and the nonprofit organizations paid to help them get settled.

In broken English or through a Pashto translator, Afghans described having to make impossible choices with little resources. Some have decided to leave Las Cruces, sometimes to meet family, but often just to try their luck in places they hear are better.

Their interviews provide a rare glimpse into the difficulties Afghans face in their new country, one that invaded theirs more than 20 years ago and then hastily left.

Leaders of the two agencies resettling Afghans in Las Cruces said they are doing their best to furnish English education, transportation, medical care, benefits and jobs to the newcomers. It’s the first time either agency has resettled refugees like this. They’re doing so in a city with no pre-existing Afghan community, one that is also hosting refugees from the Middle East for the first time in its history.

This is part one in a series about Afghans seeking refuge in New Mexico and working to build new lives. It’s drawn from interviews with 16 newcomers, plus experts, state and federal officials, and leaders of the two resettlement agencies in Las Cruces.

Source New Mexico will publish several articles in the coming days. First, here are a few of their stories, told in their own words.

Amiry, 31, said he served in the Afghan National Directorate of Defense, basically the CIA of Afghanistan.

He declined to use his full name or have his portrait taken, citing enemies he left behind.

The father of three desperately wants to bring his family here. He escaped Afghanistan on a United States military aircraft while the Taliban encroached, thinking he would be flown to another base within the country. But instead he was flown to Qatar, and has been unable to see his family since. His young daughter still expects to see him.

“When the airplanes going (above) my house like this, my little daughter is saying, ‘Father, come back, come back. Please don’t go,’” he said. “Every day, she’s doing that. So it’s hard. It’s so painful. With this, you cannot stay alive.”

He’s working on getting a path to citizenship, he said, and bringing his mother, wife and children, including a new son born two weeks ago.

The agency tasked with helping him, El Calvario United Methodist Church, provides an immigration attorney, but the lawyer is available just once every two weeks to help more than 100 Afghans, Amiry said.

So, in the meantime, he is trying to make money to send home. Last weekend, he began working 12-hour overnight shifts at a local cheese factory. His English skills — gained, he said, by watching American sci-fi and fantasy series — helped greatly in helping him get the job. But he still faces daunting financial challenges.

Upon arrival, Amiry, like other New Mexico Afghans, received about $1,200 each from the federal government for basic services — things like housing, food and clothing. But the money is held by El Calvario, and it’s all Amiry has for now.

He will have to dip into that fund to pay for housing, which he’s seeking for himself and two friends, both also refugees.

The apartment was made vacant when the three Afghans, also men and also clients of El Calvario, left for Nebraska. The trio was tired, among other things, of packing themselves into the too-small apartment, Amiry said.

The other apartment, a three-bedroom, costs $1,200 a month. It’s too expensive, Amiry said. Until last Friday, he was staying for free at a Las Cruces hotel. On his last night, he spoke to a reporter about his options.

In addition to housing, the trio is also trying to find a car to take to work at the cheese factory. He’s hoping to find one for less than $5,000, a rarity amid inflation and supply chain snags.

Without a clear solution, Amiry decided to wait to talk to his case worker the following day. It was around 9 p.m., and dinner was ready. His friends and potential roommates used an electric stovetop in their hotel room to make murqh qorma, an Afghan curry dish with lemon and chicken.

They were able to find every ingredient at Wal-mart to re-create it, they said, except they had to use French bread instead of Afghan naan.

Amiry and his friends sit on their hotel room floor to eat an Afghan curry they cobbled together last Friday. (Photo by Patrick Lohmann / Source New Mexico)

Kamran Maswhani, 14, is the third-youngest of seven siblings. He lives in a four-bedroom, one-bathroom apartment with them and his parents, including his dad, who said he fought with Afghan Special Forces against the Taliban.

The burden of navigating New Mexico has fallen almost entirely on Kamran, the teen said. He said he’s applied directly to the state’s Human Services Department for cash assistance for his family and does all the translating, despite attending a local public school. He learned English through private lessons in Afghanistan, he said.

He said the $1,200 each member of his family received is going quickly, and they have been unable to find work so far. He is also the point of contact for his uncle, Noorullah, who is severely disabled. Noorullah lost his legs in an explosion when fighting against the Taliban, he said.

“Why am I caseworker?” Kamran asked angrily outside the Las Cruces Islamic Center last week. “What does caseworker mean for us?

The family’s “welcome money,” as they call it, is soon running out. He described being frustrated with the way their resettling agency, Lutheran Family Services, pays it out on their behalf. They’ve so far been paid in gift cards for groceries and for a transportation card that Kamran said they won’t use.

The family arrived in early February, he said. The teen is worried what will happen when they’ve been here 90 days and they have to make do largely on their own. It’s spring break this week, he said, which has made it easier for Kamran to help his family sort through state and local bureaucracy and get a medical appointment for his mother.

They hoped to go to San Antonio, Texas, where they have relatives, Kamran said. But Maswhani, like the other refugees who spoke to Source New Mexico, were instead directed to Las Cruces.

“This was not our first choice to come here,” Kamran said. “…We cannot see any changes here. No one here can help us.” 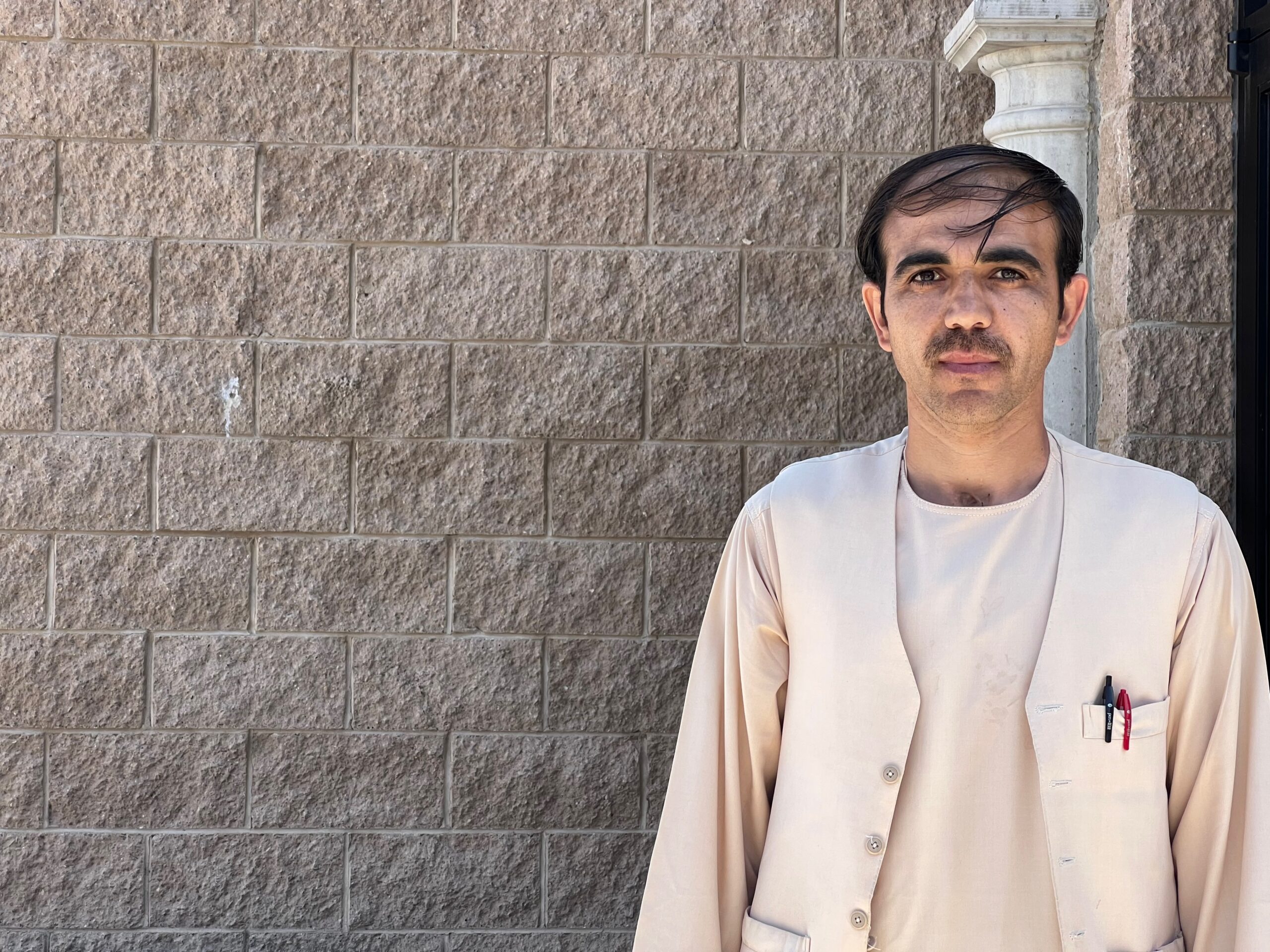 Mohammad Sabir said he feels lost in a bureaucratic limbo, unable to work, drive or fend for himself. This is his third month in Las Cruces, he said.

As he speaks outside a Las Cruces mosque through an interpreter, he points to wounds on his body and describes the sacrifices he said he made for his country while fighting for Afghan Special Forces.

First, he lifts the sleeve on his right arm and pokes at a bullet still lodged in his wrist.

Then he places a hand on his chest. He has only one lung due to being shot, he said, and struggles to breathe at night.

He walks with a limp after being shot, he said, in the left leg. Then he traces his hand along a four-inch scar on his neck, a shrapnel wound.

He is still waiting to get a Social Security card and work authorization, he said. He knows how to drive, but speaks little English and therefore can’t pass the state’s Motor Vehicle Division written test. He and other refugees have said the MVD has no interpreter for Pashto or Dari — two common languages spoken in Afghanistan.

“I was a very proud and high-ranking person in Afghanistan,” he said. “But right now I am feeling a little bit sad because the people are looking at me kind of lower. I don’t have anything right now.” 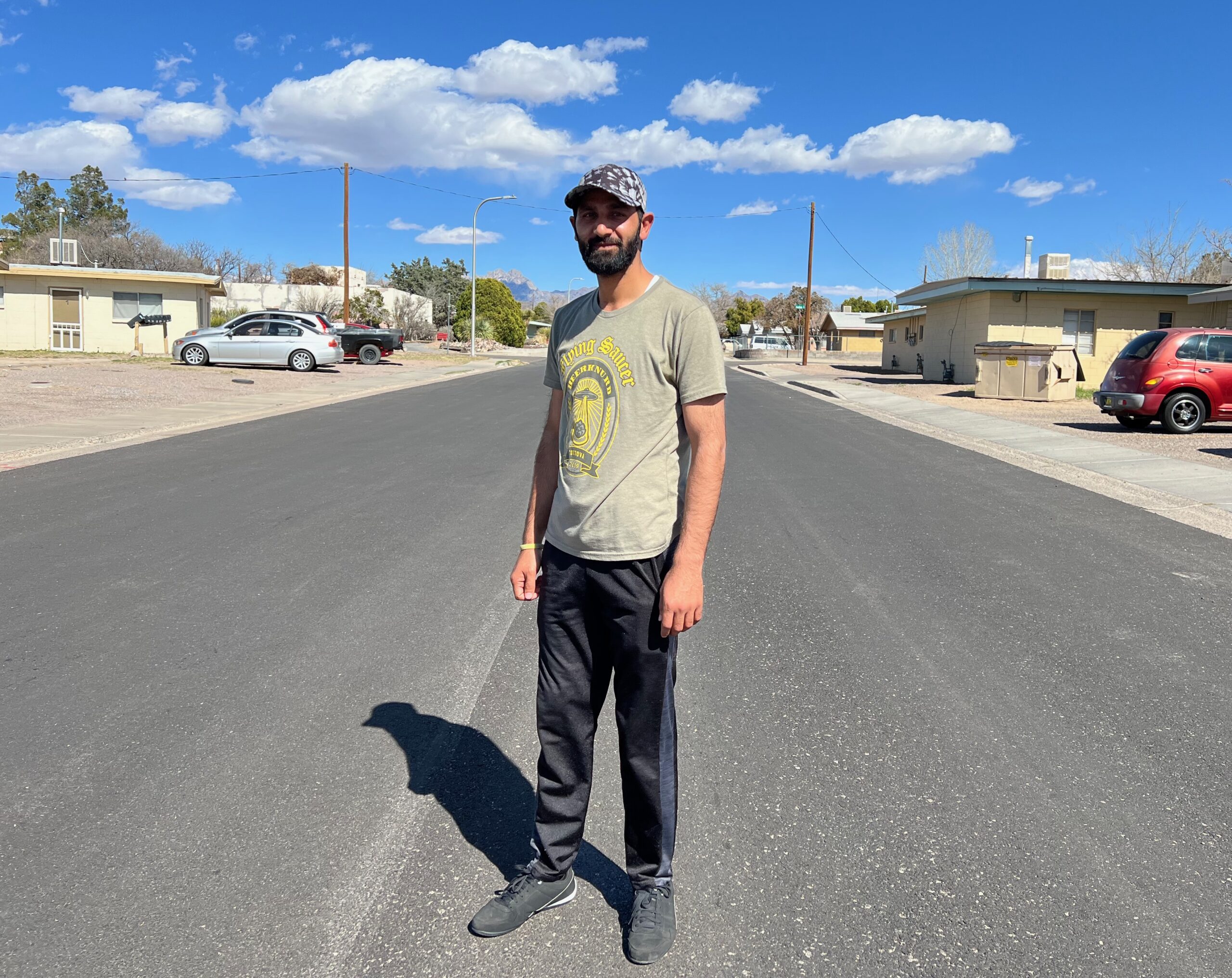 Abdul Rab Noori stands in the middle of the street in his former Las Cruces neighborhood last week. He’s since moved to Iowa, giving up on finding the type of future he seeks in Las Cruces. (Photo by Patrick Lohmann / Source New Mexico)

Like his fellow Afghans, Abdul Rab Noori did not ask to come to Las Cruces. Instead, he asked to live in Georgia, where a friend lived.

A former military interpreter, Noori, 35, had plans to attend college and study information technology. But he decided to put that plan on the back burner for now, saying he needs to find meaningful work to “stand on my own two feet.”

Lutheran Family Services hooked him up with a job at a local chile factory, but he thought it would be for translation services. Instead, it was just menial labor, he said.

Last week, he left Las Cruces to live with his brother, an American citizen, in Iowa. There, he hopes he can find work.

“Very sad,” he said, about putting off his education. Going to college was one of the silver linings about coming to the United States, he said.

He misses his family and wakes up each day to see new horrors from Afghanistan on his social media feed. He’s reluctant to weigh in on America’s invasion and, 20 years later, the abrupt withdrawal. He hates politics, he said.

But his voice rose as he described trying to find a future in the country that occupied his home for so long.

“How many people have lost their lives in 20 years in Afghanistan?” he said. “And what happened in the end?”

Man accused of fatal ABQ shooting while on probation

‘An Arm and a Leg’: Private Equity Is Everywhere in Health Care. Really.