It’s hidden, the only access being tribal roads off US Highway 75, which connects the towns of Vadito, Peñasco and Dixon to the roads leading to Taos or Española.

This offers residents a clear view of anyone entering the community. Picuris Gov. Craig Quanchello said the perch is often how residents know when federal police are coming.

“Picuris has been discriminated against,” he said. “My people, my community, we’ve been targets. But the intention is to grow cannabis here.”

Two visits stick out in Quanchello’s mind: a 2017 raid by Bureau of Indian Affairs officers that decimated the Picuris medical grow facility and a 2021 raid where a private citizen had his medical grow confiscated.

“We’re farmers by nature. Let us grow. We were here farming this land before any white man stepped in this land.”

Those busts happened even though medical marijuana has been legal in New Mexico since 2007. Marijuana is still illegal under federal law. The U.S. House passed a measure today to decriminalize cannabis nationally, though the bill still needs to clear the Senate, where approval is uncertain.

In advance of the launch of the state’s legal recreational marijuana industry on April 1, Picuris and Pojoaque Pueblos signed an intergovernmental agreement with the New Mexico government last week that offers protection and support under the N.M. Cannabis Control Act.

The intergovernmental agreement shows the pueblos are willing to cooperate with the state on cannabis regulations, even if they choose to operate their own cannabis divisions under tribal governments, said N.M. Gov. Michelle Lujan Grisham in an interview.

Two Pueblos sign a deal with N.M. to begin selling legal marijuana. Will it keep feds at bay?

“You still have to meet our minimum requirements for transparency, testing, public safety, protecting minors, all of that, but we do respect that they can do independent regulation,” Lujan Grisham said. “They’ll be making their own rules and regulations, but they can’t diminish, they can only enhance or equal the state requirements that we already have.”

Regardless of the agreement, Quenchello said the threat of federal officials enforcing marijuana laws demands a cautious approach to building cannabis enterprises on the Pueblo.

This won’t stop Picuris from maintaining its medical dispensaries outside the Pueblo, Quenchello said, or hinder plans to open a recreational shop in Santa Fe during the summer.

Picuris also operates a Santa Fe hotel and spa that is in the stages of becoming a space for people to smoke or ingest onsite, or get a CBD massage. Quenchello dubbed it “a bud and breakfast.”

He said the Tribe is careful to only use unrestricted funds on its cannabis enterprises, meaning revenue made from operations like its gas station or the hotel — not federal dollars.

“Economic independence is our goal,” Quenchello said. “We’re not a gaming Tribe. We do not have a large population or a lot of land. There is no more relying on the federal government. We’ve got to be self-sustainable.”

As the Picuris use their sovereignty to build an economy off a sector that is legal in New Mexico as of Friday, the presence of federal law enforcement is a reminder of their precarious position.

The outdoor cannabis grow space on Picuris Pueblo. Federal agents raided the space in 2017 and it has not been used since. (Photo by Shaun Griswold / Source NM)

Anthony Knitter is the lieutenant governor in Picuris, and part of his responsibility is to manage the checkpoint that limits access under COVID protocols. The Pueblo is still closed to visitors and anyone invited must take a temperature check and show a vaccine card. Due to the checkpoint, Knitter said the Pueblo is able to track when and how long BIA police visit.

He said their presence is sporadic, almost always unannounced, and it’s hard not to think Picuris is being targeted for marijuana enforcement.

Their visits have led to dozens of citations for possession, but no actual prosecutions that head to court, Quenchello said.

Take the incident in 2021. BIA officers raided a home in Picuris and confiscated plants from an individual who was growing legally under his New Mexico medical cannabis license. Even that case was not prosecuted.

It did cause the loss of a $10,000 investment and access to personal medicine. And it served as notice that the U.S. attorney for the District of New Mexico could send law enforcement to Picuris at a moment’s notice.

“There are no guarantees. It is still a schedule I drug,” Quenchello said. “The BIA threatens to take our jobs, take our plants and take our seeds.”

The U.S. Attorney’s Office for New Mexico refused to answer questions about whether the intergovernmental agreement will protect Picuris — or anything else related to enforcement of marijuana laws on the Tribe’s land.

One thing is clear, people in Picuris want to grow. But the condition of their medical cannabis grow space is an indication there is a long way to go. Picuris was one of the earliest tribal communities in New Mexico to take the risk and enter the medical marijuana sector in 2015. In less than two years, the feds turned north on Highway 75 and raided the facility, shutting down the operation and confiscating more than 30 mature plants, Quenchello said.

The space is now unused, filled with the kind of weeds people don’t smoke. A greenhouse 24-feet-by-24-feet is still standing, but the plastic shield protecting the outdoor grow is tattered. A metal trailer that was used for testing and indoor grows is showing rust. 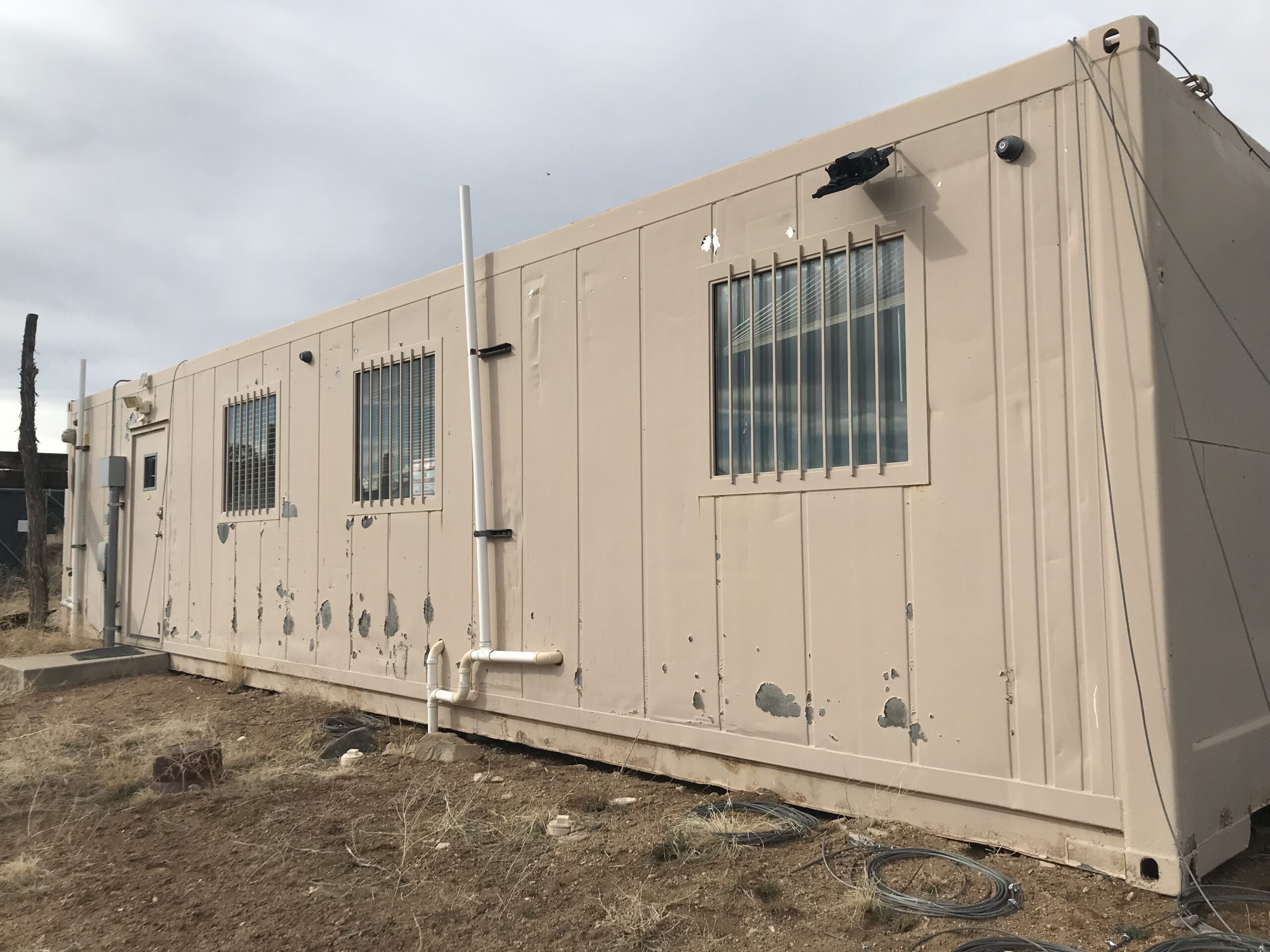 Known as “The Lab,” this metal structure was used for indoor cannabis grows, and for testing product, soil and water. Federal agents raided the space in 2017, making it unusable. (Photo by Shaun Griswold / Source NM)

After the raid, Quanchello argued with the BIA that shutting down the cannabis grow hurt the economic growth of the Picuris. He said he was told, “If you need money we can get you a grant writer.”

Quanchello said the Picuris have their heels dug into cannabis and will use the market to their advantage, even if the repeal of federal prohibition is moving slowly. He is hopeful for a new U.S. attorney, more friendly to their efforts, and that Congress will pass legislation to decriminalize marijuana.

And with that business, there’s potential for economic independence — the kind you don’t get from grants.

“We’re tired of being held up and rounded up, put in these reservations and telling us what to do and limiting us from advancing,” Lt. Gov. Knitter said. “We’re farmers by nature. Let us grow. We were here farming this land before any white man stepped in this land.”

Watch: Going Beyond the Script of ‘The G Word’ and How Government Responds to Disease…

Bison Pastrami, Anyone? Preschool Assistant Makes Sure Kids Get to Know Indigenous…

KHN’s ‘What the Health?’: Waking Up to Baby Formula Shortage