Jake Hauenstein, a 13-year-old seventh grader at R. Roger Rowe School, accompanied Jim Ziegler, a 99-year-old World War II veteran from Julian on the recent San Diego Honor Flight. The trip, organized entirely by volunteers and supported by donations, takes veterans to see the memorials dedicated to their service in Washington DC Jake and his sister Ivy, a third grader at Rowe, raised $2,500 for Ziegler to go on the flight.

“It was absolutely amazing,” Jake said of his unique experience as the youngest on the trip.

The three-day trip from April 29- May 1 included 83 WWII and Korean War veterans and two Vietnam War veterans with terminal illnesses. The oldest veteran at 101-years-young was a US Army B-24 pilot in WWII who earned the Distinguished Flying Cross for his wartime actions.

The flight included veterans who landed on the beaches of Normandy, fought in the Battle of Inchon, a pilot who flew 31 combat missions over North Korea, a sailor who served on the USS Midway, and two Navy veterans who are best friends from the Korean was.

Jake turned 13 on April 30, the day the veterans saw their memorials. That day Jake wore the leather bomber jacket worn in World War II by his grandfather Clifford Hauenstein, who passed away in 2021 at the age of 100.

It was Jake’s first time wearing the special jacket that his grandfather had worn flying B-17s at Guadalcanal.

“The veterans were really impressed and it really meant a lot to my husband’s family,” said Jake’s mom Marsi, who served as a guardian on the trip. Mr. Hauenstein had never had an opportunity to go on an Honor Flight but a piece of him was there—many of the veterans reminded Jake to take care of that priceless jacket.

This year Rancho Santa Fe and Rowe School were again big supporters of Honor Flight as five local students raised a total of $15,000 toward the flight.

Rowe fifth graders Samantha Choconas and Sloan Harris each raised $5,000, enough to sponsor four veterans. The girls were able to meet two of the men that they sent to Washington DC

Dorri Hawkes, Rowe’s front desk and attendance clerk, served as a guardian on the flight and many Rowe teachers and students showed up at the airport to participate in the heroes homecoming celebration for the veterans at the airport.

All were inspired by teacher Stacey Halboth, an English language arts intervention teacher at Rowe and former librarian. Considered a key volunteer, this trip was Halboth’s third Honor Flight since 2018. At Rowe, she has shared with students about what Honor Flight is all about and introduced them to veterans to hear their stories of sacrifice and service. Beyond the trip, Halboth has formed caring friendships with the local veterans she has accompanied.

“This is going to be Jake’s passion all because of a good teacher,” said Marsi. “She changed his life in a lot of ways.”

Jake is a kind-hearted, well-spoken young man who plays in the band at Rowe, interns at a Rancho Santa Fe horse ranch, drives race carts and rides bulls with the Southern California Youth Bull Riders.

This was the first time the Hauensteins raised money for Honor Flight but they have been supporters for several years, attending the homecomings at the airport.

Over Thanksgiving break last year, Jake and Ivy sat in front of the Rancho Santa Fe Post Office and talked to everybody who came in and out, collecting donations. At times, they were joined by George Sousa, a Korean War veteran from Rancho Santa Fe who was sent on an Honor Flight by Rowe students.

Touched by the patriotic pair or inspired by the cause, all the little donations from community members added up to $2,500, enough to send one veteran on the trip.

It was a little surprising to be invited to actually go on an Honor Flight but Jake couldn’t say no. 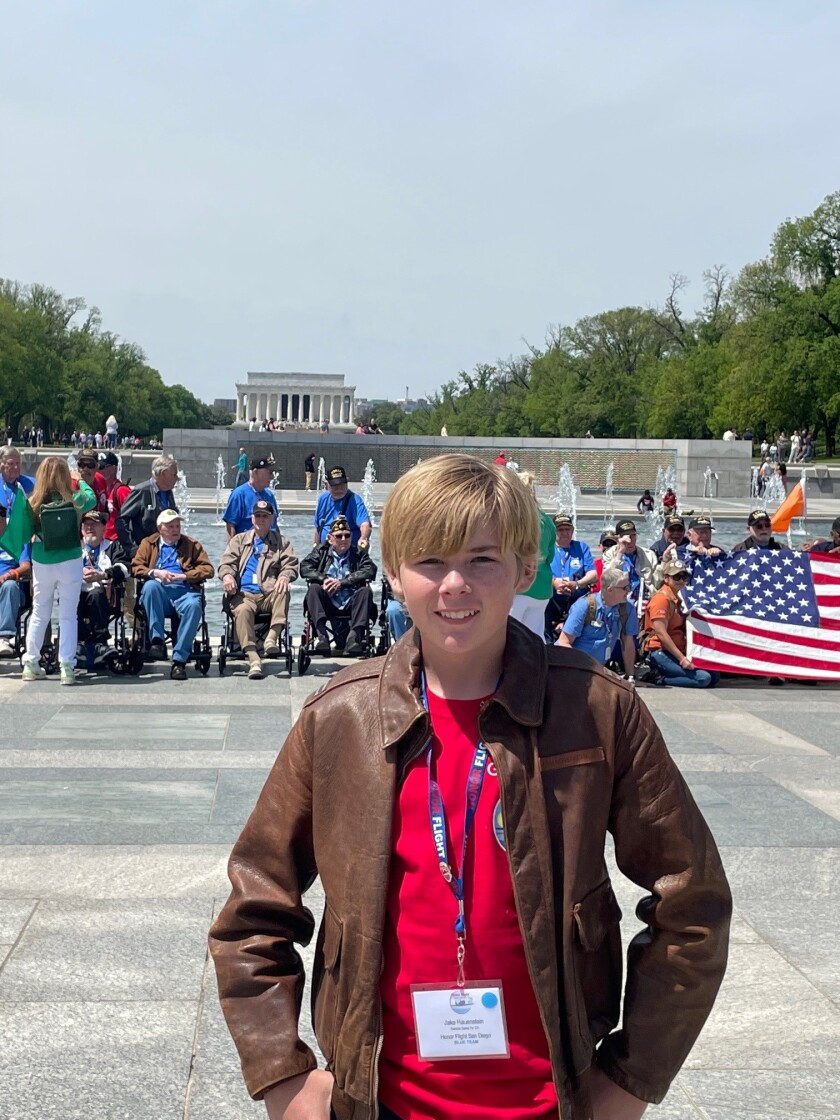 At first his veteran Mr. Ziegler was a little hesitant— Jake said he reminded him of his grandfather who could be similarly stubborn. But Jake was able to make a special connection with him and everyone witnessed a transformation over the weekend.

“Jake was so compassionate and caring with his veteran,” said Halboth. “He took it so seriously. I was so proud of him.”

Traveling around DC with the group of veterans was an unforgettable experience for Jake and it was impossible to pick out a favorite moment.

“I got to talk to an amazing amount of veterans, every single one of them. They were all so quiet about what they did, they were all so humble, kind and nice to each other and nice to me,” Jake said. “I loved getting to see how happy some of the people were. A lot of them didn’t have a lot of reasons to leave their houses so it was pretty cool getting to see them get to talk to each other and meet people that served where they served.”

The homecoming ceremony at the airport was also memorable. Jake has gone to the airport to welcome the veterans but this was his first time experiencing it from the other side, with patriotic songs playing, American flags waving and crowds of people cheering.

“To walk through the airport with them was amazing,” Jake said. “I watched my veteran Jim open up and smile and hug people. He was a different person.”

Following in his teacher’s footsteps, Jake has formed a special friendship with Jim that did not end with the flight. Jim has already invited Jake out for pie and ice cream in Julian. He has also promised to make Jake a model airplane.

This will also not be the end of Jake’s support for Honor Flight.

“I would love to keep on fundraising for Honor Flight,” Jake said. “I can’t think of a good reason why I wouldn’t.”

This spring’s flight was the last all WWII and Korean War veteran flight as the next flight will also include Vietnam War veterans. The first Vietnam veterans from the San Diego hub, where an estimated 60,000 Vietnam veterans reside, will be members of Navy HA(L)-3 Seawolves, the most decorated Navy squadron of the Vietnam War and in all of Naval Aviation History. Honor Flight is now accepting applications from Navy Seawolves for the fall flight at HonorFlightSanDiego.org. 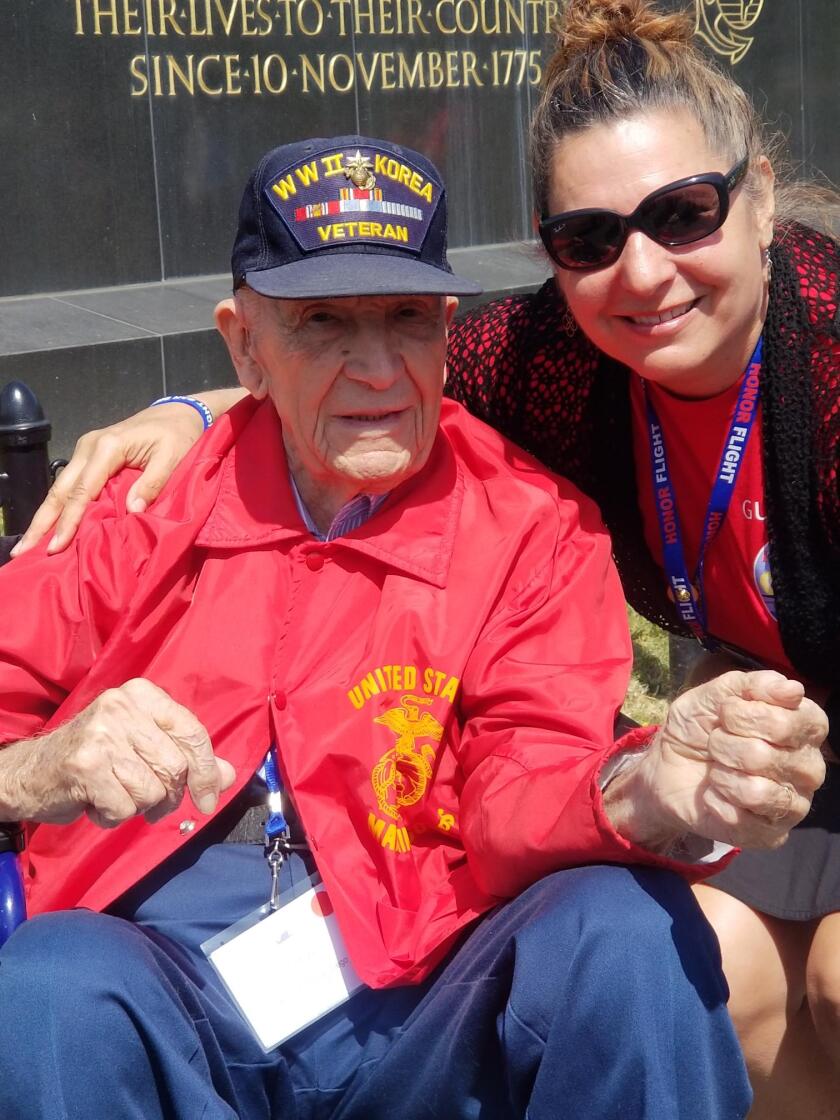