Albuquerque voters will decide Nov. 2 whether to borrow $50 million to help pay for a new stadium for the New Mexico United soccer franchise. The team’s owner and the city’s mayor have been promising economic benefits from the new facility.

“This facility will draw fans from across the state for sporting events, concerts, and will be an asset to local businesses in the community,” Albuquerque Mayor Tim Keller said.

But a group of local residents and workers say the project is a waste of limited public money and will accelerate gentrification in the city.

To pay back the $50 million, city officials estimate that they will pledge $3.2 million in gross receipts tax revenue every year for the next 20 years. The New Mexico Legislature has pledged about $8 million toward the stadium, too.

Stop the Stadium, a grassroots campaign of workers and residents working to stop gentrification in the city, is urging people to vote no on the bond issue.

Susi Knoblauch, a 25-year resident of Barelas — near one of the proposed stadium sites — said at a news conference on Wednesday, Oct. 13, that should the stadium be built, the losers will be taxpayers who fund subsidies for millionaires. The winners, she said, are companies that gain benefits from those subsidies, like real estate developers and construction firms.

“The winners are the political officials who can argue they’ve done something to encourage economic development,” Knoblauch said.

The soccer stadium is only the latest chapter in a long history of what sports journalist and author Dave Zirin in 2017 called “little more than corporate theft, in collusion with often Democratic Party-led governments.” Pacific Standard magazine found that between 2000 and 2015, privately owned stadiums in the U.S. received more than $12 billion in public money.

Bex Hampton was born and raised in New Mexico. They have lived in the central part of Albuquerque for 10 years. In 2020, they were pushed out due to rising rents and had to relocate to the Westside.

New Mexico United Owner Peter Trevisani has said the stadium will bring 780 jobs to the city. But Stop the Stadium campaign member and Barelas resident Vic Gomez said 500 of those jobs are temporary construction gigs, and 280 of them “we don’t know the wages for, and I would assume from the other developments, these are minimum wage jobs with no benefits.”

Gomez compared the stadium proposal to when the city government shut down San Gabriel Park to build the aquarium and botanical gardens.

“It breaks up our communities, our culture, and we have to find another place to live,” Gomez said. “The city has failed to respond to the pandemic with hazard pay for essential workers, ending evictions or responding to the housing crisis. There are thousands of people in this city ready for a solution to the problems in our city — and just like more police is not the answer, neither is a stadium. So we will continue to fight against gentrification in the South Valley and Barelas.”

The Albuquerque Police Department (APD) already has a disproportionately large budget compared to all other city services, Hampton said. According to city records, “public safety” spending accounts for 29% of the city’s $1.2 billion annual budget, larger than any other part of the city government’s spending.

Stop the Stadium organizers held a news conference Tuesday in the Barelas neighborhood, one of the two proposed sites for a new soccer stadium in Albuquerque. (Photo by Austin Fisher / Source NM)

Building the stadium will bring in more police to “clean up the neighborhood” and keep unhoused people out of sight and out of mind, they said.

There are a lot of neighbors without shelter in Barelas who camp or stay in nearby shelters, like Steelbridge or the Good Shepherd Center, Hampton added.

“Removing people from the neighborhoods that they’re camping in is not a solution to homelessness,” they said. “We want housing. “Our demand is housing, not policing. That is a solution.”

Hampton pointed to APD’s sweeps of homeless encampments across the city in the weeks leading up to Balloon Fiesta as an example of the kind of displacement that will happen if the stadium is built. The most destructive example, they said, are the Olympics. “Every time an Olympic stadium is built in the United States, policing definitely increases, to remove our homeless neighbors, to remove residents just from walking around, so that it becomes a nice-looking place for wealthier, mostly white individuals.”

The team has agreed to pay the city $800,000 per year plus “$100,000 a year minimum for concessions and revenue generated from the facility over the course of a 25-year lease,” the United Soccer League reported.

A January 2011 study by two economists at the College of the Holy Cross said the methodology used to estimate the economic impact of sports subsidies is “fatally flawed, resulting in a consistent bias toward large, but unrealized, impacts.”

A September 2008 review by two economics professors about the effects of subsidies for professional sports franchises and facilities found “the economic impacts of stadiums, arenas, sports franchises, and sport mega-events has consistently found no substantial evidence of increased jobs, incomes, or tax revenues for a community associated with any of these things.”

They wrote that “tangible” economic benefits from sports facilities are very small — far smaller than stadium advocates say they are, and smaller than the public funding that goes into them.

By focusing their work on research done by economists — instead of by scholars from public policy or urban development departments — they found a nearly unanimous conclusion that “stadiums, arenas and sports franchises have no consistent, positive impact on jobs, income and tax revenues.”

“If professional sports franchises and facilities do not have any important positive economic impact in the local economy, then subsidies for the construction and operation of these facilities are even more difficult to justify,” the authors wrote.

Frances Armijo is the president of the South Broadway Neighborhood Association, another community near a potential stadium site. She spoke as a resident of the neighborhood and not in her official capacity, and said all of the discussion about the stadium is about its economic value or lack thereof to Downtown and the Railyard.

“Nowhere do I read or hear of the economic and social impact it will have on the Barelas and South Broadway neighborhoods,” she said. “That’s because, in my opinion, we simply don’t matter. In my opinion, we are the sacrificial lambs for this vanity project. Please, when you vote, ask yourself  ‘Would I want this in my neighborhood?’ ”

Hampton said Trevisani and his rich developer friends have spent hundreds of thousands of dollars on ads and other marketing efforts to sell a stadium to the public because they are expecting to make huge profits while putting taxpayers in debt.

“The residents in these neighborhoods and across the city don’t want this stadium, but their voices are not being heard,” Hampton said.

‘No group is a monolith’

On Oct. 8, the Barelas Neighborhood Association issued a statement supporting the stadium.

“At a moment when the rich history and culture of our communities is being appropriated and exploited, Bond Measure R-21-187 creates an opportunity to craft a national model for how to more equitably redevelop an urban core,” the association wrote. “A ‘Yes’ guarantees working on a plan to protect communities, to the greatest extent possible, from disruption and displacement.”

The association said the stadium development will benefit the neighborhood because it will be governed by a Community Benefits Agreement that will be written by the city government.

Hampton said members of the Stop the Stadium campaign have knocked on hundreds of doors in the Barelas neighborhood.

“Most people don’t even know that the stadium is being built, and most people are against it,” they said. “However, no group is a monolith.”

A 2004 study by the Federal Reserve Bank of Philadelphia compared 53 cities’ average rents in 1993 to those in 1999 and — controlling for other variables — found the presence of an NFL team raised annual rents by 8%.

Hampton said there will not be anything in the CBA guaranteeing that rent and property taxes won’t rise as a result of the stadium’s construction.

They pointed out rent control is illegal under New Mexico law.

“Landlords in New Mexico can raise rent as often as they want, by as much as they want, and property taxes are going to increase as well, which will also force landlords to raise the rents even more,” Hampton said. “But it’s more than just rent control. We need more than rent control. We need to guarantee that housing is affordable. We can’t allow landlords to just raise rent every year when wages aren’t rising.”

Jim Harvey, director of the Albuquerque Center for Peace and Justice, said the stadium proposal is about more gentrification, more money in the pockets of those who don’t need it, and more places to live for people who can afford high-end properties.

“As an African American, I can tell you first hand, I know gentrification when I see it,” Harvey said. “We don’t need that. What we need is a redirection of resources. We’ve got homeless people living on the streets and under bridges and corners and any place that they can find. And the city is dragging its feet on addressing the homeless issue. And I’m not talking about warehousing people, like in the proposed Gateway Center. I’m talking about real homes, real opportunities for a real place to live. That’s what we need to see happening here. If you want to float a bond on something, float a bond issue on housing people that are living on the streets.” 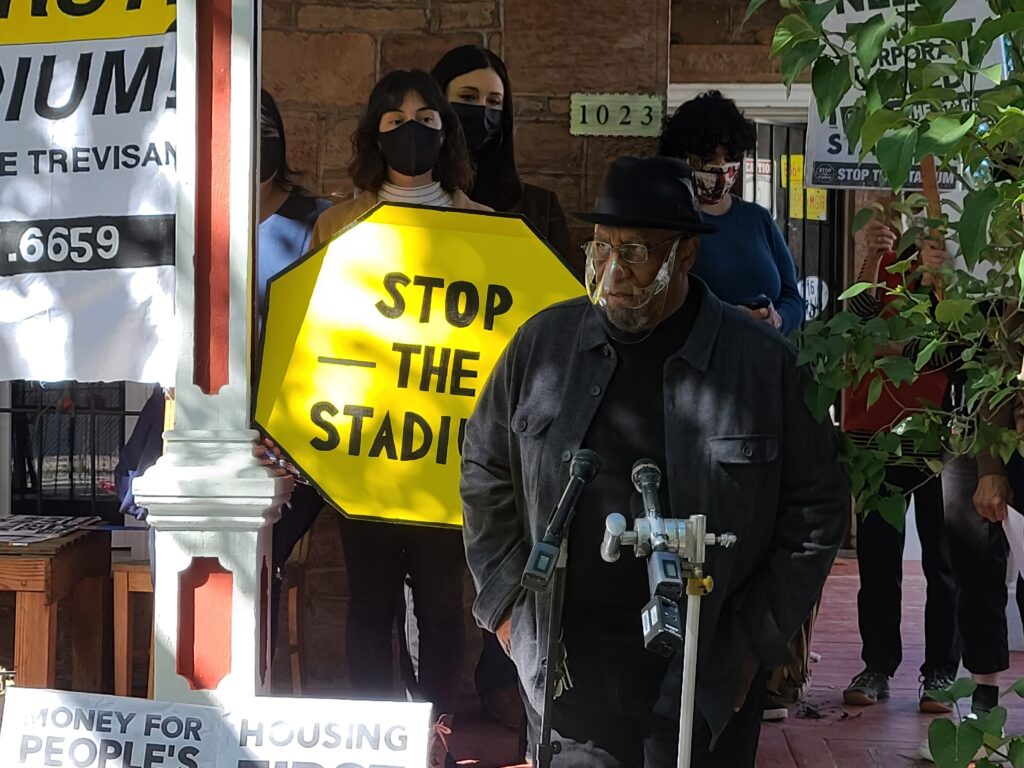 Jim Harvey, director of the Albuquerque Center for Peace and Justice, said there is no peace in homelessness, gentrification or in uprooting people and entire neighborhoods so that the wealthy have a new playground. “We’re seeing a new amusement park for the wealthy. And that’s what this stadium will be. A new amusement park for the wealthy. The wealthy that will rake in 100s of 1000s of millions of dollars for a small investment price of uprooting and destroying this wonderful neighborhood. Vote no, and bring justice into Albuquerque.”

The city will hold a forum on Zoom that requires prior registration with Julian Goss, a city-contracted attorney, who will discuss Community Benefits Agreements. Register here.

Stop the Stadium will screen the documentary “Battle for Brooklyn,” about the struggle to stop the construction of a basketball stadium in the Prospect Heights neighborhood at 6 p.m. on Oct. 26 at the Albuquerque Center for Peace and Justice at 202 Harvard SE.

Stop the Stadium will also hold a rally at 5 p.m. on Nov. 1, the day before Election Day, at Joseph J. Baca Plaza at the intersection of Fourth Street and Barelas Road The rally will be followed by a march.