After presenting drive-in and smaller productions over the past two seasons, San Diego Opera plans to come back in a big way for its 2022-23 season.

The upcoming season, which goes on sale today, will open with a world premiere Spanish-language opera about Mexican artists Frida Kahlo and Diego Rivera. It will also feature a large-scale production of Giacomo Puccini’s “Tosca,” and a program of two one-act Puccini operas: “Suor Angelica” and “Gianni Schicchi.” The season will also include two Detour Series productions at the Balboa Theatre, including the world premiere of composer Nicolas Reveles’ “Ghosts,” a trio of one-act horror-inspired operas, and the long-delayed co-production of Zach Redler’s war-themed “The Falling and the Rising.” Among the singers scheduled to perform here next season are mezzo-soprano Stephanie Blythe, soprano Michelle Bradley and bass-baritone Greer Grimsley.

Greer Grimsley returns as Scarpia in San Diego Opera’s “Tosca” in May 2023.

David Bennett, San Diego Opera’s general director, said in an interview that the company’s board of directors agreed to boost next season’s operating budget to signal to the public that the company is back in its full, vibrant form.

“We want next season to feel like a return to prominence for us.”

Like virtually all arts organizations that have reopened since last summer, San Diego Opera has been experiencing slower ticket sales than it did before the pandemic. Some of it may be COVID-related reluctance among past ticket-buyers to sit in a crowded auditorium. But Bennett said the pandemic has also made many ticket-buyers more risk-averse about trying something new or unfamiliar. 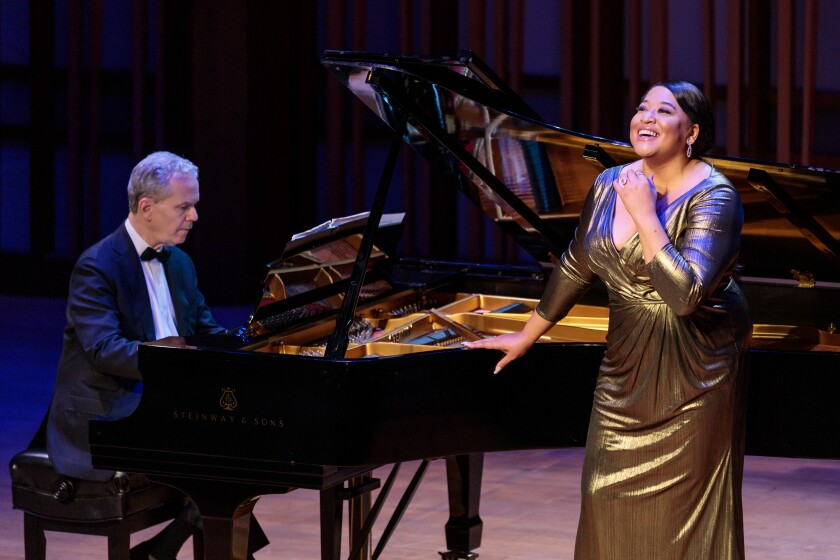 So for the coming season, the two Puccini productions should do well, and interest in the “Frida y Diego” opera is high, Bennett said. But he adds that the company is anticipating it may have slightly lower ticket sales for the less familiar works in the season. The federal arts stimulus grants the company received during the pandemic will give the company time to rebuild its customer base.

Subscription packages are now on sale, with a three-opera Main Stage subscription for the shows at the San Diego Civic Theater starting at $105 and two-opera Detour Series tickets starting at $70. Full series subscriptions start at $175. For tickets, call (619) 533-7000 or visit sdopera.org. 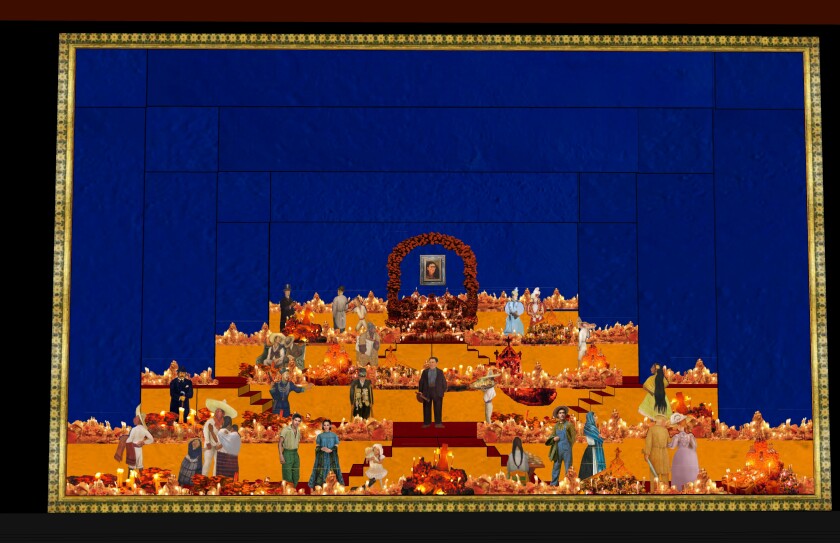 Grammy-winning Latina composer Gabriela Lena Frank and Pulitzer Prize-winning Cuban-American librettist Nilo Cruz have been working on this Spanish-language opera project for five years. San Diego Opera co-commissioned the piece with San Francisco Opera, Fort Worth Opera and DePaux University, and SDO will present its first performances. The opera takes place in 1957, when muralist Diego Rivera is weeks away from death and he hopes that the spirit of his ex-wife, painter Frida Kahlo, who passed in 1954, will visit him on the Day of the Dead so they can relive their tumultuous love story. The opera, with an evocative scenic design representing the colorful worlds of the living and the dead, will feature soprano Guadalupe Paz as Frida, baritone Alfredo Daza as Diego and soprano Maria Katzarava as Catrina, the keeper of souls. Lorena Maza makes her company debut as director, and Roberto Kalb will conduct. Bennett said: “The design will be very compelling and the music is absolutely compelling. The music is written in a way that’s not phrased in ways that sound like Italian opera, but it has a very unique voice and it’s easy to become engaged in it.” 7:30pm Oct. 29, Nov 1 and Nov 4. 2 pm Nov 6. San Diego Civic Theatre. Mezzo-soprano Stephanie Blythe will star in the Puccini Duo at San Diego Opera in February 2023.

Two of the three one-act operas that make up Giacomo Puccini’s 1918 “Il Trittico” will be presented as a double-bill. “Suor Angelica” is the tragic story of Sister Angelica, a nun who learns the sad fate of the boy she bore out of wedlock seven years earlier. This will be the first production of “Suor Angelica” in San Diego Opera’s 58-year history. “Gianni Schicchi” is a comic opera about a clever “fixer” of the same name who dons a disguise to help his daughter Lauretta’s fiancé, Rinuccio, restore his family’s fortune. It’s famous for the soprano aria “O mio babbino caro (Oh my dear papa).” Mezzo-soprano Stephanie Blythe will play the role of Principessa in “Suor Angelica” and the male role of Gianni Schicchi. Soprano Marina Costa-Jackson will play Suor Angelica and Lauretta and Polish tenor Piotr Buszewski will play Rinuccio. San Diego Opera principal conductor Yves Abel will lead the orchestra and Paul Curran makes his company directing debut. 7:30 pm Feb. 11, 14 and 17. 2 pm Feb. 19, 2023. San Diego Civic Theatre. 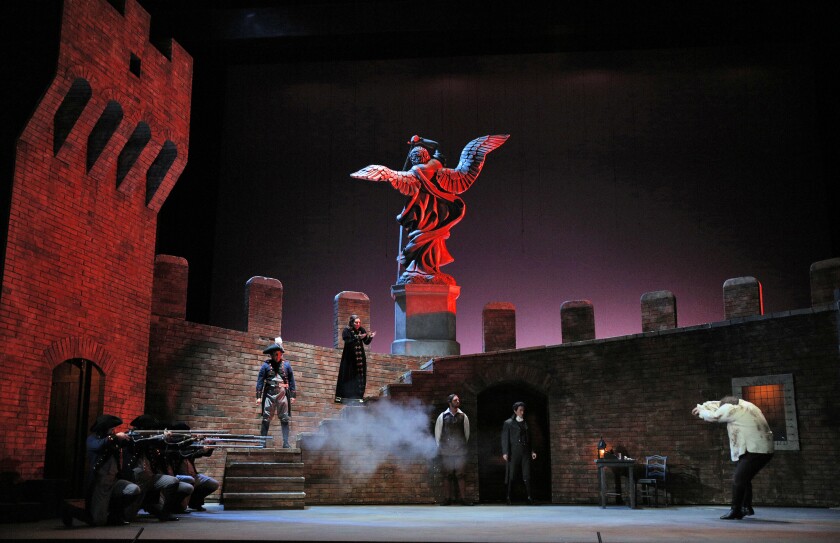 Last performed here in 2016, Puccini’s beloved 1900 opera is the tragic story of Floria Tosca, a beautiful Florentine opera singer who loves the painter and political activist Mario Cavaradossi, but is pursued by the city’s lustful and murderous police chief Scarpia. Soprano Michelle Bradley (who played Aida here in 2019 and did a solo concert last year) will play the role of Tosca. Bass-baritone Greer Grimsley will play Scarpia, the same role he played here in 2016. Argentinian tenor Marcelo Puente makes his company debut in the role of Mario Cavaradossi. The production will be directed by Alan E. Hicks and conducted by Valerio Galli. 7:30 pm March 25, 28 and 31. 2 pm April 2, 2023. San Diego Civic Theatre. 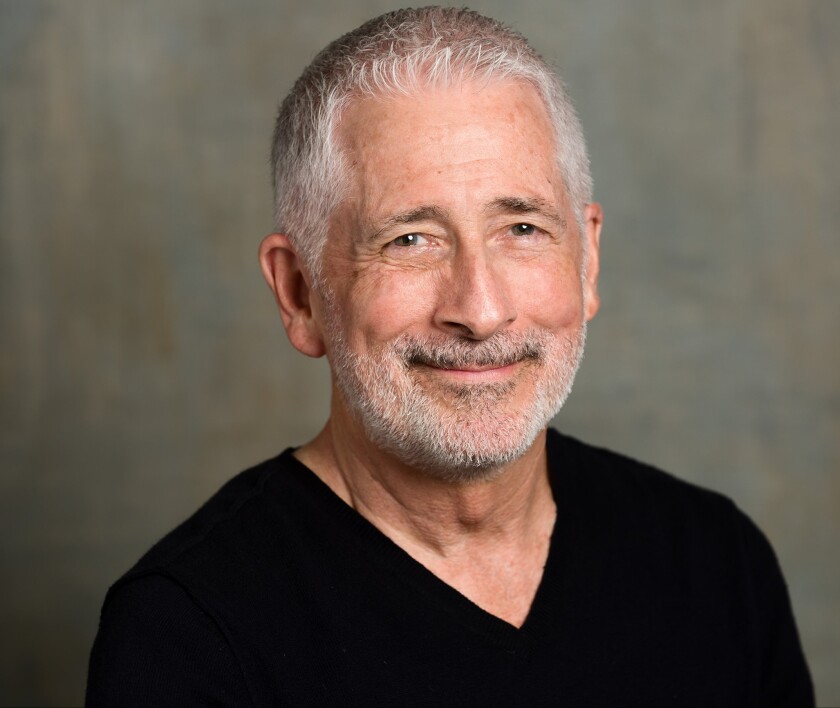 San Diego composer Nicolas Reveles has written a trio of horror-inspired one-act operas for the company’s Detour Series of smaller and nontraditional works. “Dormir” explores what happens when Old World spiritual practices meet the Christian belief system and powerful entities appear. “House” explores how trauma haunts many of us and remains in our bodies like ghosts. And “Eden,” with a libretto by director John De Los Santos, explores the boundaries of madness and obsession in a tribute to Edgar Allan Poe. Mezzo-soprano Emily Fons (Rosina in SDO’s 2021 “The Barber of Seville”) will star in the operas, which will be directed by John De Los Santos (“Maria de Buenos Aires” in 2018) and conducted by Bruce Stasyna. 7:30 pm April 14 and 15. 1 pm April 16, 2023. Balboa Theatre. 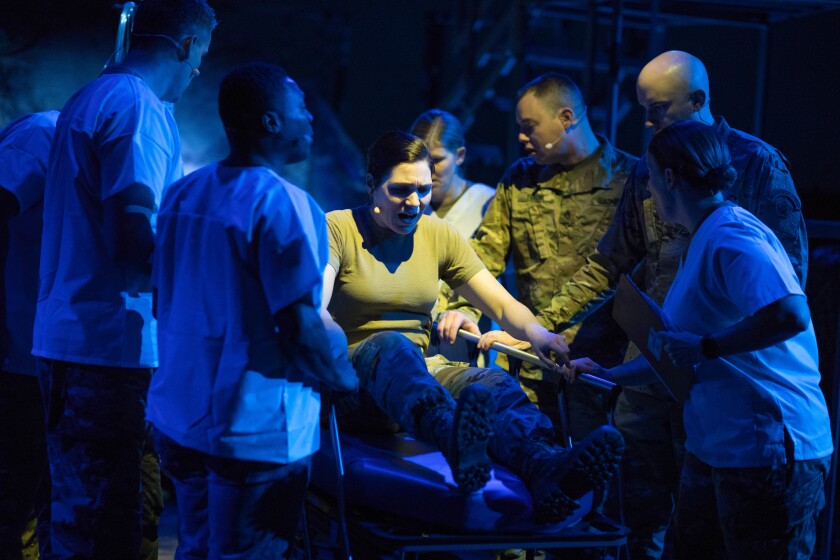 A scene from San Diego Opera’s “The Falling and the Rising,” playing May 12-14, 2023, at the Balboa Theater as part of the company’s Detour Series.

‘The Falling and the Rising’

Originally announced for the 2019-2020 season but postponed due to COVID, Zach Redler’s opera is a co-commission between San Diego Opera, the US Army Field Band and Soldier’s Chorus, Seattle Opera, Arizona Opera, Opera Memphis, TCU, and Seagle Music colony Based on dozens of interviews with active-duty soldiers and veterans at hospitals on the East Coast, it’s the story of a female soldier, severely wounded by a roadside bomb, who is placed in an induced coma to reduce trauma to her brain. In this dreamlike state, she must make the journey toward healing and home. Two of the SDO production’s five singers are active-duty military: Teresa Alzadon and Ben Hilgert. 7:30 pm May 12 and 13. 1 pm May 14, 2023. Balboa Theatre. 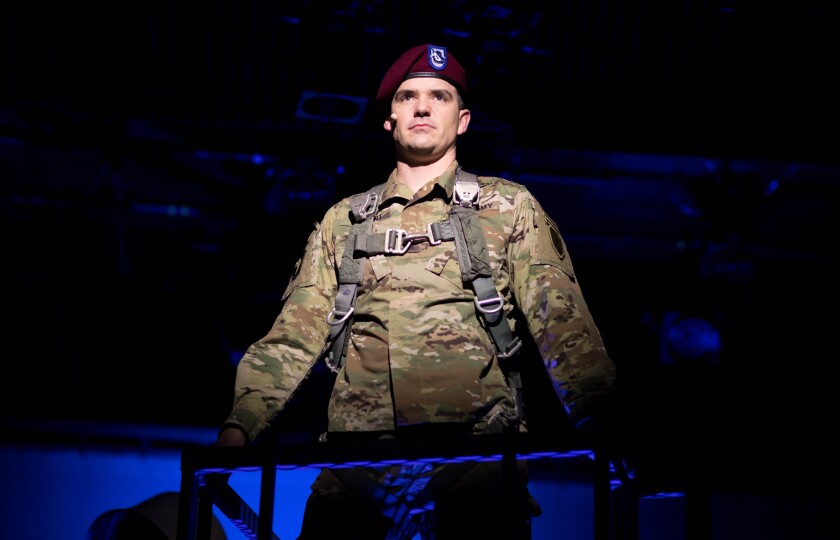 A scene from Zach Redler’s “The Falling and the Rising,” being presented in May 2023 as part of San Diego Opera’s Detour Series.