Construction is underway in Santa Ana Pueblo for Tesla’s second car dealership facility in New Mexico. A sleek 35,000 square foot facility is expected to open in May 2023, acting as a sales, service and delivery center.

When the facility opens up, Tesla will have centers near three major cities in New Mexico — Albuquerque, Rio Rancho and Santa Fe.

Tribal, federal and state leaders met on Friday to announce the partnership between Tesla and Tamaya Ventures, the business group for Santa Ana Pueblo.

“Like many of my fellow tribal leaders, the Pueblo of Santa Ana has been working hard to grow our economy, diversify our revenue sources and to create careers, not just jobs,” Santa Ana Pueblo Gov. Joey Sanchez said.

Santa Ana Pueblo Gov. Joey Sanchez climbs inside a Model Y Tesla parked at the worksite for a new Tesla dealership after the announcement of the partnership between Tamaya Ventures and Tesla concluded on the morning of Friday, Oct. 7, 2022. (Photo by Shelby Wyatt for Source NM)

An initial group of tribal members will undergo a Tesla training program so they can be employed at the center. Jose Garcia is a manager for Tesla START, an intensive company training program, and said this electric vehicle technology is new to pretty much the entire automobile industry.

The new Tesla center will have a supercharging station for people to charge vehicles away from home. There are only 12 superchargers in New Mexico.

“Our responsibility is going to be to properly train the other technicians to safely work on the vehicles and effectively repair them,” Garcia said.

Tamaya Ventures Board Chairman Glenn Tenorio was a speaker at the event. He said this new facility will help diversify revenue for the Pueblo.

He brought up recent work in the Legislature that will help electric vehicle sales — a bill passed this year eliminated a double tax with state and tribal taxes that consumers would previously have to pay when purchasing cars on tribal land.

Tesla started in 2003 and gained popularity over the years with billionaire owner Elon Musk. However, the company couldn’t sell in New Mexico for a long time due to a law prohibiting direct car sales and repairs, the only way Tesla actually sells and services automobiles.

Tesla bypassed that ban by opening a sales and service center in Nambé Pueblo in 2021, the first Tesla facility on Native American land. On Santa Ana Pueblo land, another sovereign nation, Tesla skips the state law by following what the tribal government offers in its bylaws, direct automobile sales to customers.

Tenorio said he wants Tamaya Ventures to be able to work with Tesla to make more affordable models, though it’s still ultimately up to Tesla.

The ban on direct car sales and repairs was originally put in place to prevent local dealerships from being put out of business by manufacturers, and is in other states as well. Tesla has been fighting it for years, and so have some lawmakers in New Mexico.

Sen. Gerald Ortiz y Pino (D-Albuquerque) sponsored a bill in 2019 that would lift the direct car sales ban. The legislation was created with Tesla in mind but died in the Legislature.

Sen. Martin Heinrich (D-N.M), in attendance at the event, said the law is antiquated and supports changing it. However, he said he’s excited about these solutions that have been found to bring the electric vehicle company to the state.

“They really create opportunities in places like Santa Ana and Nambé that have allowed Tesla to work with communities that I think they didn’t necessarily have relationships with in the past,” Heinrich said.

Tesla has been front and center for a number of controversies, including fraud and false advertising recently with its autopilot technology. Heinrich said every car manufacturer he’s worked with has had its challenges, but he’s had a very positive experience with Tesla and his own electric vehicles from the company. Heinrich said he drives a Tesla Model 3, a vehicle he’s owned for three years. 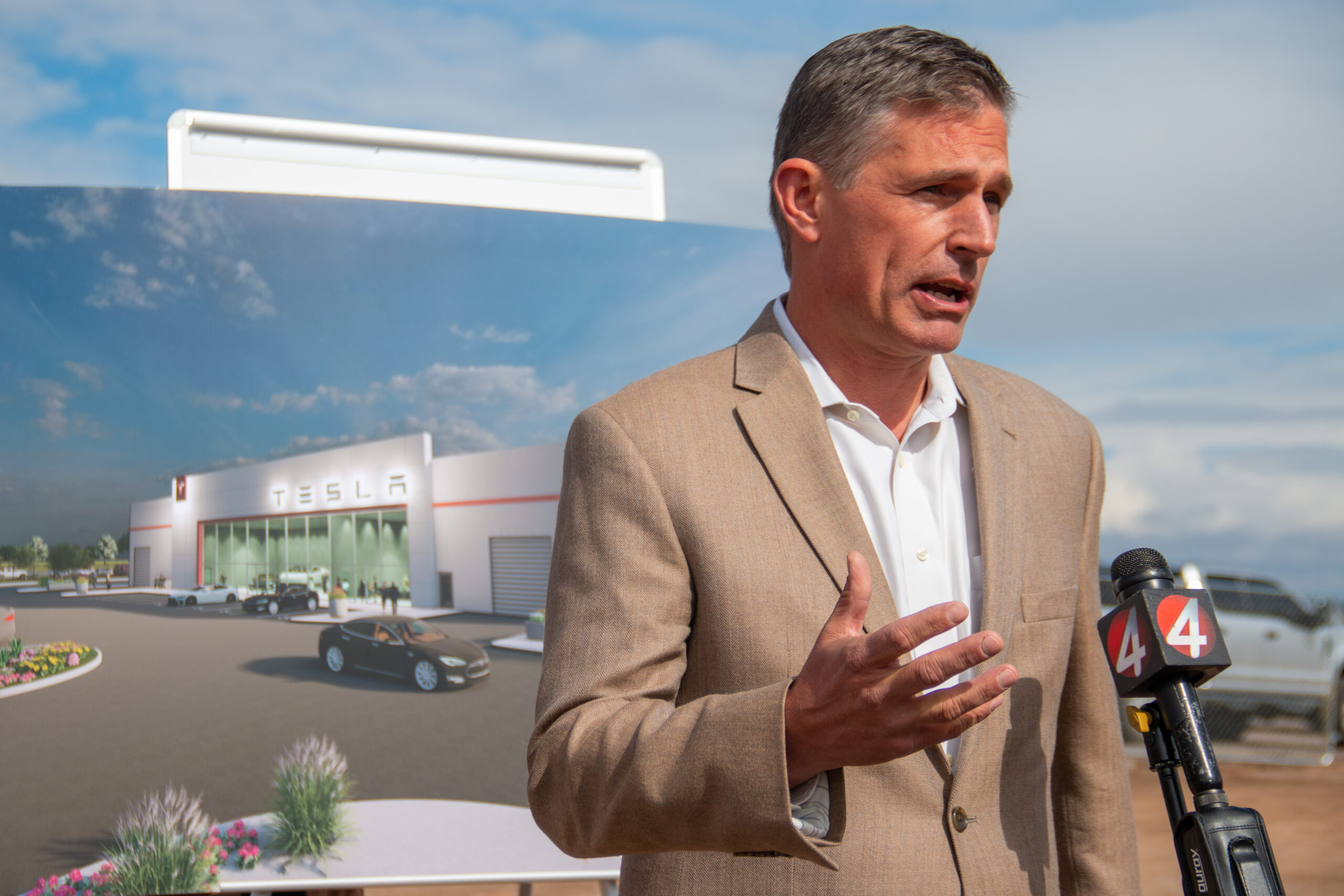 Sen. Martin Heinrich (D-N.M.) speaks to members of the press at the worksite for a new Tesla dealership in Santa Ana Pueblo after the announcement of the partnership between Tamaya Ventures and Tesla concluded on the morning of Friday, Oct. 7, 2022. (Photo by Shelby Wyatt for Source NM)

“I’ve worked with Tesla and other electric vehicle makers to really try to invest in this transition, because it’s an enormous opportunity for us to really change our emissions profile,” Heinrich said. “Transportation is the single largest source of greenhouse gas emissions, and there isn’t another manufacturer who’s done more to change that paradigm.”

New Mexico Department of Transportation Secretary Ricky Serna attended the event and said over the next few years the state will invest more than $40 million toward electric vehicle charging infrastructure in New Mexico.

The event brought people representing the Democratic congressional delegation from New Mexico that brought up clean energy investments passed by Congress, including $5 billion for an electric vehicle charging network through the Bipartisan Infrastructure Law and tax credits through the Inflation Reduction Act.

Multiple speakers mentioned that the process to get the center going was challenging, requiring long hours, legal battles and sometimes frustration.

Tenorio said his Pueblo could model other tribal entities to take on similar ventures.

“Santa Ana (Pueblo), we want to continue to be a leader in taking the chance in bringing this type of business to the Pueblos,” Tenorio said.

Heinrich said the electric vehicle market is growing fast and will dominate the entire car market in a decade. This partnership is making way for positive change, he said.

“It’s at a moment in time in our history that we’re going to look back on in a few decades, and realize that we were right at the fulcrum of incredible change with incredible leadership to make that change,” Heinrich said.

Sanchez said collaboration was a key component in getting the center going and can be vital to creating other strategic partnerships in the future as well.

“I believe this is an opportunity for us to come together to begin to imagine and build the next generation’s economy,” the Pueblo’s governor said. “We can obviously make this bigger for all of us. We can make this the future for us, put New Mexico on the map. Pueblos, tribes of New Mexico — put us on the map.” 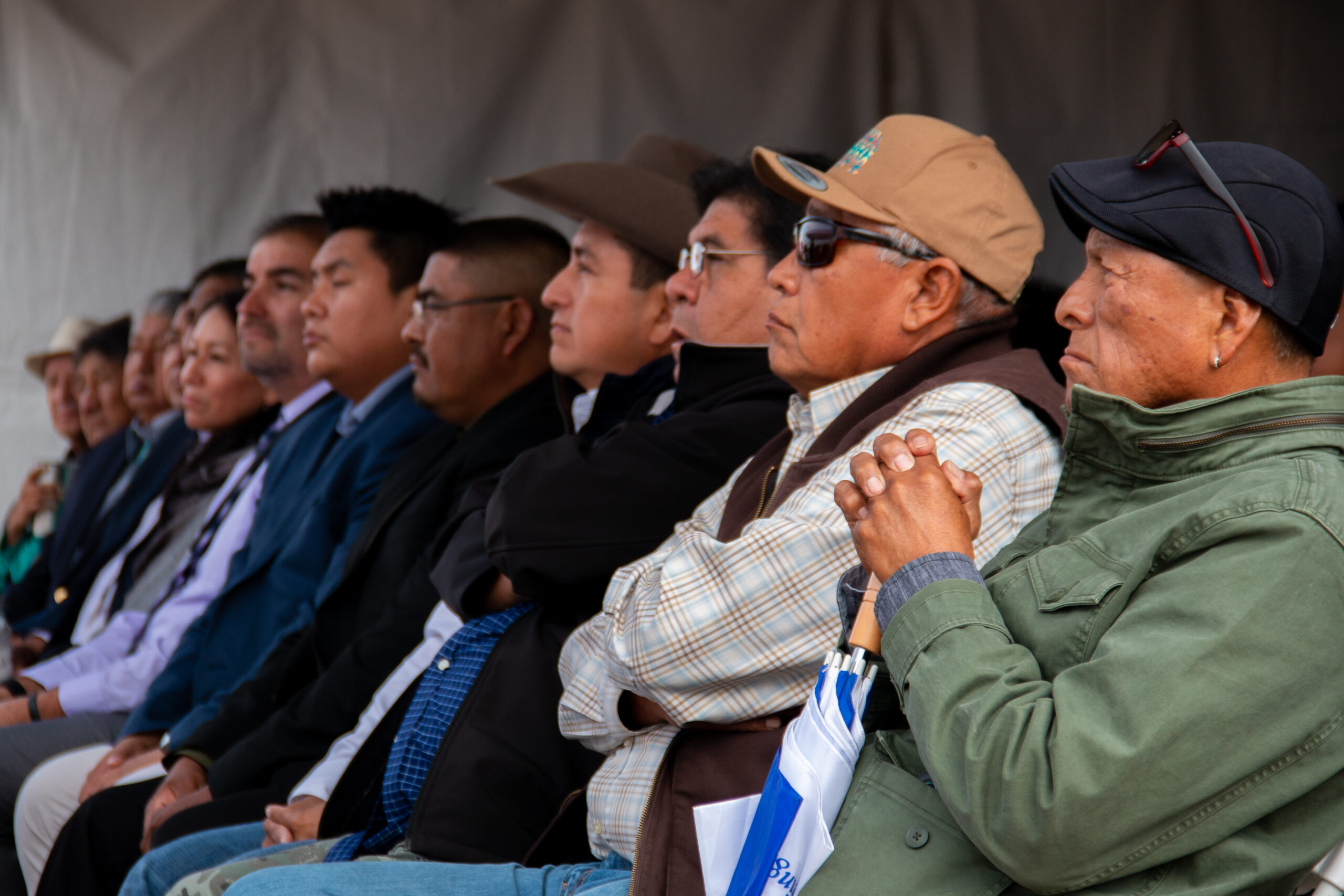 Santa Ana Pueblo Tribal Council members and brothers Juan and Lawrence Montoya (right) sit next to other Tribal Council members during the announcement of a partnership between Tamaya Ventures and Tesla to build a new dealership at the site on the morning of Friday, Oct. 7, 2022. (Photo by Shelby Wyatt for Source NM)

“We are no longer waiting for the world to come to Santa Ana, Tamaya,” Sanchez said. “We are now taking Tamaya to the world.”

Shapiro enjoys providing inspiration for others

Fixing TANF in New Mexico is ‘one of the most important’ tasks for 2023 session,…

Nine names heading to the governor, who will select a brand new Public Regulation…

Watch: The Politics of Health Care in California