On a ride through the eastern Gila, laughter dwindled to silence as southern New Mexico ranchers saw Black Fire destruction on their land for the first time. Shocked and saddened, they took in blackened trees, flooded areas and cows wandering beyond burnt fences.

The second-largest blaze recorded in the state’s history consumed much of the Gila National Forest, charring federal land, as well as the acres where the ranchers live and work.

Jack Diamond, whose family has owned Diamond Bar Ranch since 1967, is grappling with the aftermath of the fire that’s now largely out. He said people don’t understand the extent of the harm the fire did to southern New Mexico.

He is looking for help to rehabilitate the land and restore his property, he said, but he doesn’t even know who to ask.

Rancher Jack Diamond points out areas of the Gila that were hit by the Black Fire. Pictured on July 28, 2022. (Photo by Megan Gleason / Source NM)

The Black Fire didn’t just hurt the ranchers living and working in the forest, Diamond pointed out. Recreationalists like tourists and hunters will also be feeling the effects of the fire for years to come.

The bumpy road to forest recovery

Amid a landscape of trees with leaves and needles charred to a dead orange color, newly sprouting grass shocks the dark soil, and fallen limbs on the ground sprout fresh green growth in some areas.

Fresh grass sprouts near trees seared by the wildfire in the Gila on July 28, 2022. (Photo by Megan Gleason / Source NM)

But what the land needs now is reseeding, especially grass, Diamond said.

One of Diamond’s neighbors and rancher Matt Schneberger said the U.S. Forest Service already missed the best time to reseed. “They’ve missed it. They can never come in here and rehab this,” he said. But Diamond said there’s still a chance, even if the best opportunity has already passed.

Diamond also encouraged salvage logging, using the dead trees for timber, so they won’t act as a hazard if floods drag them down to roads or trails. He said logging can prevent future fires from blazing out of control as well, since there would be fewer trees to ignite.

Not everything about the fire was bad, Diamond said, pointing out areas of the forest that were thinned out in a healthy way. Nearer to the edges of the Gila, green sprouts covered everything in view.

But the landscape changes deeper in the forest. Partially burned bark with green leaves becomes singed trunks. Then all color is eventually gone, leaving only massive dead trees towering over lifeless soil. 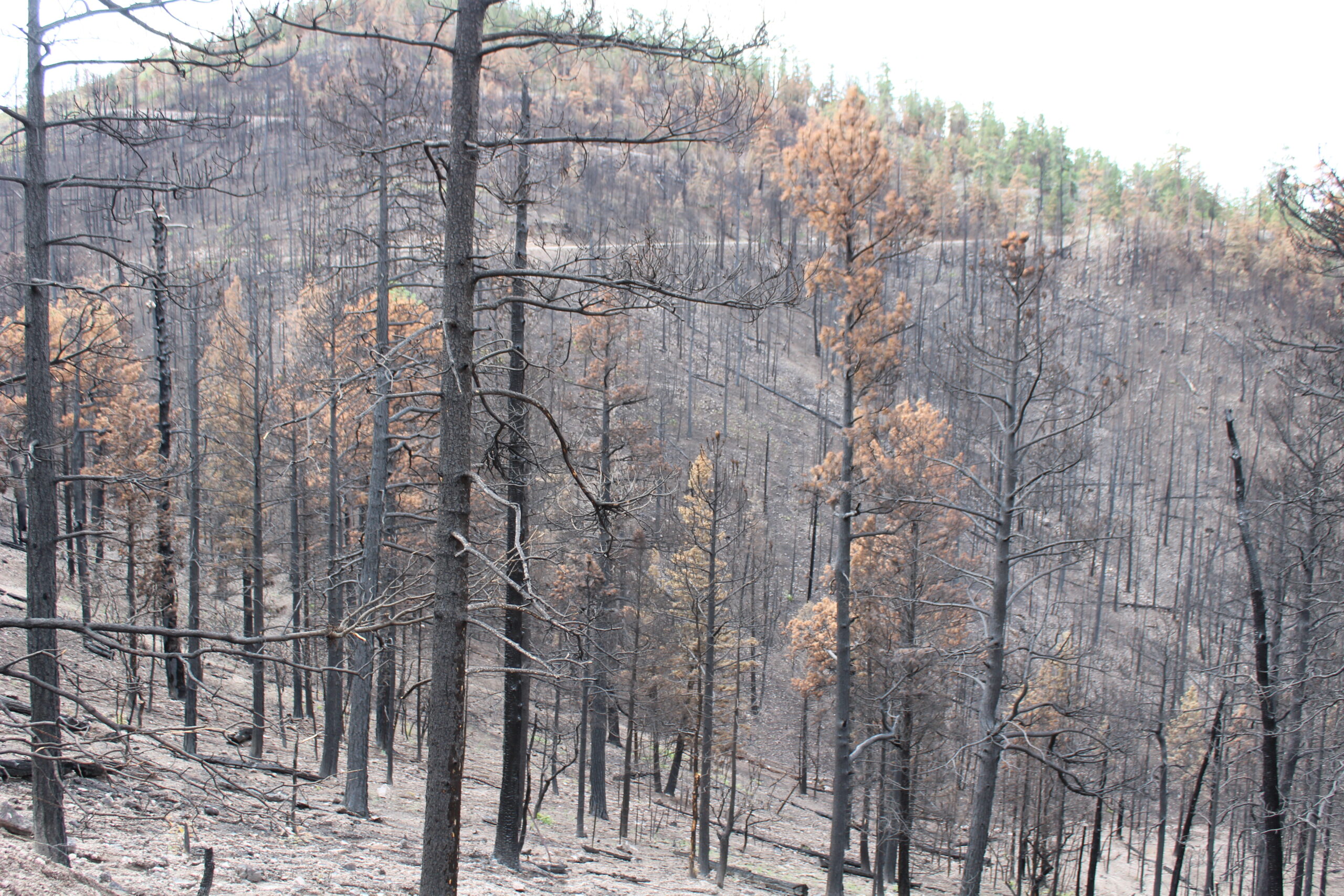 A ravaged hill of trees stand dead and blackened on July 28, 2022 after the fire in the Gila National Forest. (Photo by Megan Gleason / Source NM)

Those trees, he said, won’t grow back. And some of the soil is what the ranchers call “moonscaped,” because the white ash makes it look like the moon. That earth won’t be able to produce anything for a while in those patches and is essentially sterile, he said.

“I think what we can do is just show people that there was a lot of damage done here,” Diamond said. “I think they kind of forgot just how bad it really was.”

Repairs could add up to millions of dollars

Diamond and his wife Kaye are in the process of assessing all their losses and the repairs that are needed, he said, which could take many more months, even if other people came to help them look every day.

The Schnebergers, who have been ranchers for generations, were also hit by the fire and are looking at what’s been destroyed around their property too. They probably have it worse than anyone, Diamond surmised.

The U.S. Forest Service lit a lot of intentional fires — backburns — on the Schneberger’s property in an effort to prevent the out-of-control blaze from consuming fuels and going further. The backburns incinerated all of their pastures and destroyed a lot of their fences. Those pastures are growing back now, generating feed for their cows again, but there aren’t enough fences to keep the cows contained.

Cows from the Schnebergers’ ranch have wandered over to the Diamonds’ property to eat their grass since broken fencing isn’t holding them in anymore, but the couple understands. Miles and miles of fence became useless after being charred to nothing or near-nothing. 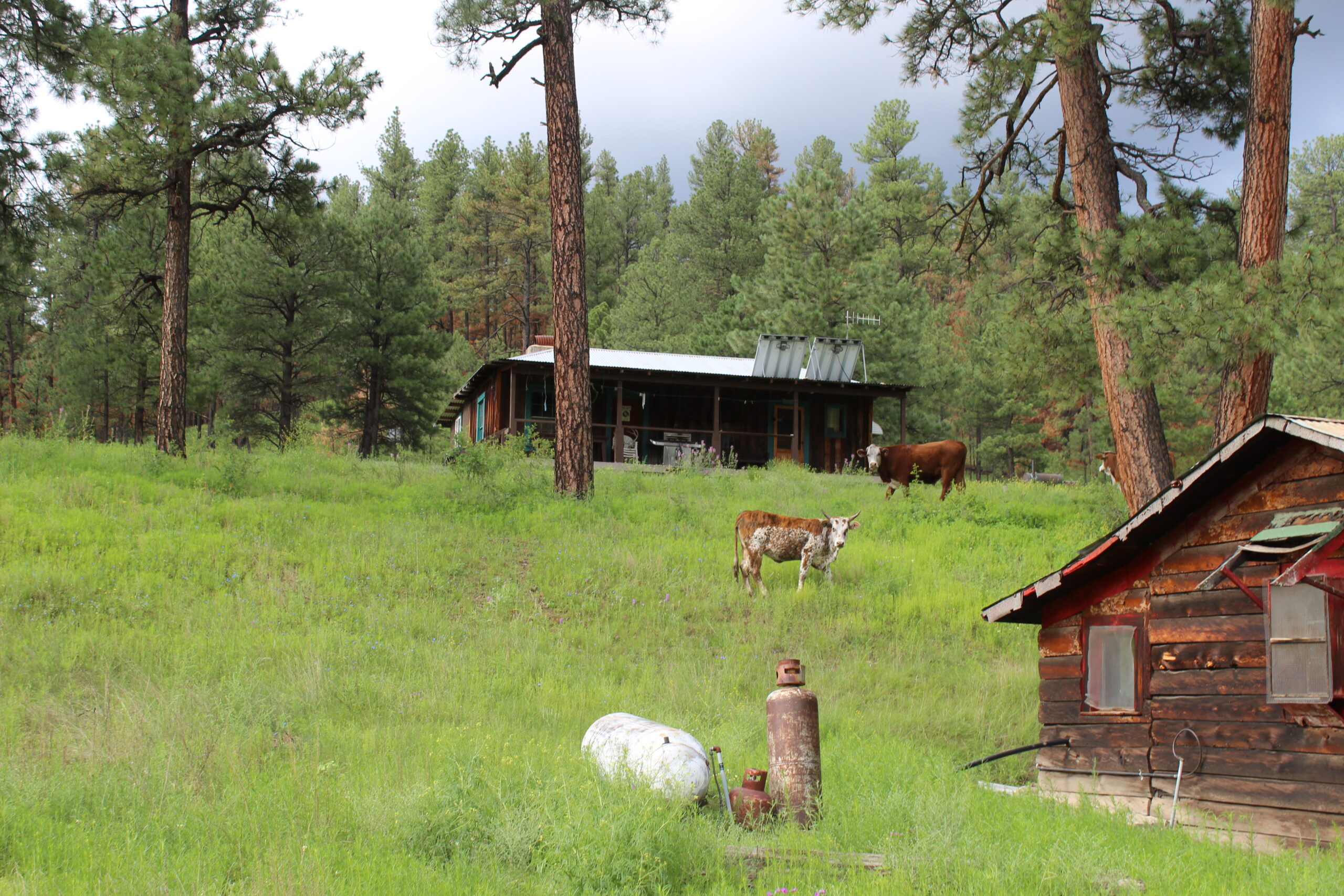 Cows from the Schnebergers’ ranch wander over to the Diamonds’ property in the Gila on July 28, 2022 to graze because the fences that once kept them contained burned up. (Photo by Megan Gleason / Source NM)

“Nobody can keep their cattle where they’re supposed to be because all the fences are burned up,” Kaye Diamond said.

That may mean losing more cows, too. “And there goes our year’s income,” Laura Schneberger said. As they drove around the Gila on Thursday, she felt some relief as she saw some of her cows for the first time since the fire started, calling out their names from the four-wheeler. 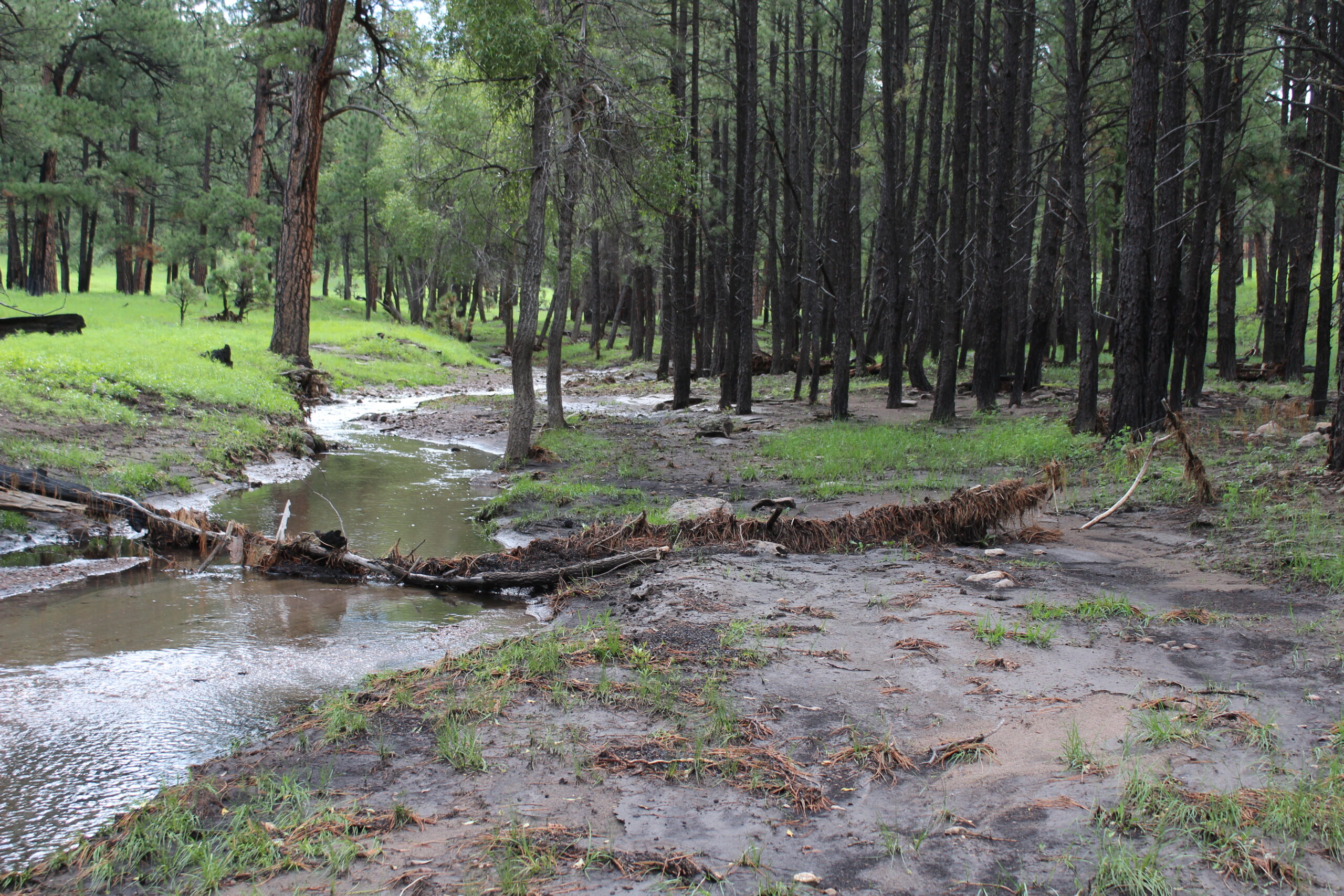 A useless fence lies on the ground on the Diamonds’ ranch in the Gila on July 28, 2022 after being seared by the fire and devastated by flooding. (Photo by Megan Gleason / Source NM)

Jack Diamond guessed his ranch has about 10 miles of scorched fences, but since he hasn’t seen everything, he said he isn’t certain. Between all the ranches, maybe around 20 miles of fencing burned up, he estimated, but Matt Schneberger said anywhere from 30 to 60 miles total could’ve been lost.

To replace just one mile can cost around $20,000 to $30,000, so they could be looking at needing nearly a million dollars just to fix the fencing alone.

Flooding can be costly, too. That’s a threat that will continue for years, Diamond said, and while he doesn’t think it’s a deadly threat in the south, he said there is a possibility of getting stranded somewhere. 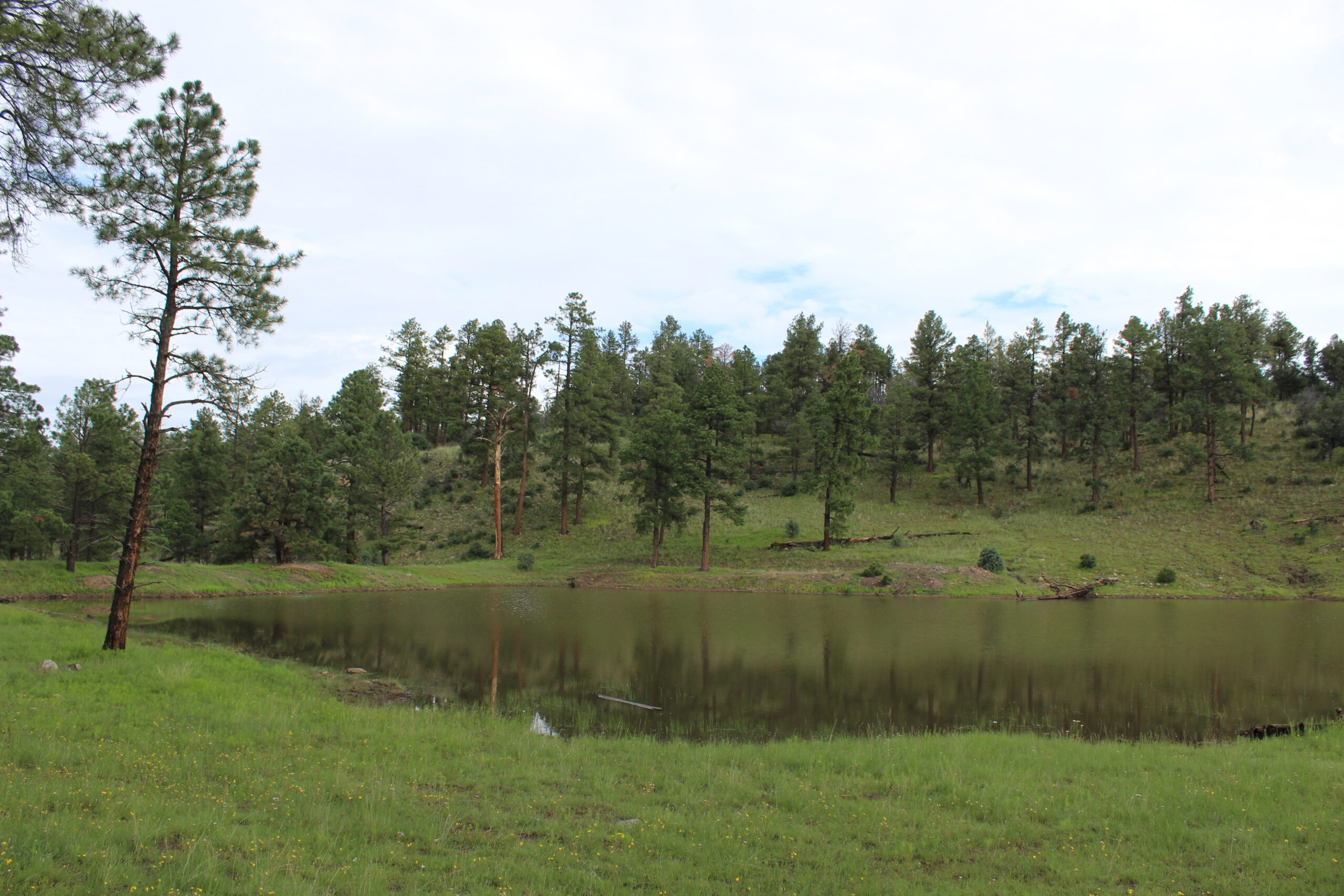 Areas that were dry before monsoon rains are now flooded throughout the Gila National Forest. Pictured July 28, 2022. (Photo by Megan Gleason / Source NM)

Special vehicles are needed just to navigate the roads and trails that are full of rocks, tree limbs and other debris carried down by floods. Some areas have huge divots filled with sitting water and other material. The Forest Service is working to clean up these paths every day, he said.

Kaye Diamond surmised that flooding broke a well, something else they need to get fixed. The water also deteriorated one of their ponds, a small reservoir with dirt walls that collects rainwater for livestock to drink. The walls were mostly knocked out by the rain and floods, and silt crept in.

Rancher Kaye Diamond looks over a now silt-filled man-made pond whose dirt walls were drastically lowered by rain and flooding on their ranch in the Gila National Forest. Pictured on July 28, 2022. (Photo by Megan Gleason / Source NM)

Where does help come from?

The goal is to get the forest back to where it was before, Jack Diamond said, and that will take help.

Gov. Michelle Lujan Grisham requested on Thursday, July 28 that the U.S. Department of Agriculture give funds to ranchers dealing with damages from fires throughout the state, although no response has been received yet.

The ranchers don’t like handouts but just want to see both the federal forest and their own land recover, Diamond said.

“We just want it rehabbed,” he said. “And it seems like they’re doing it up north, but it’s not happening down here.” 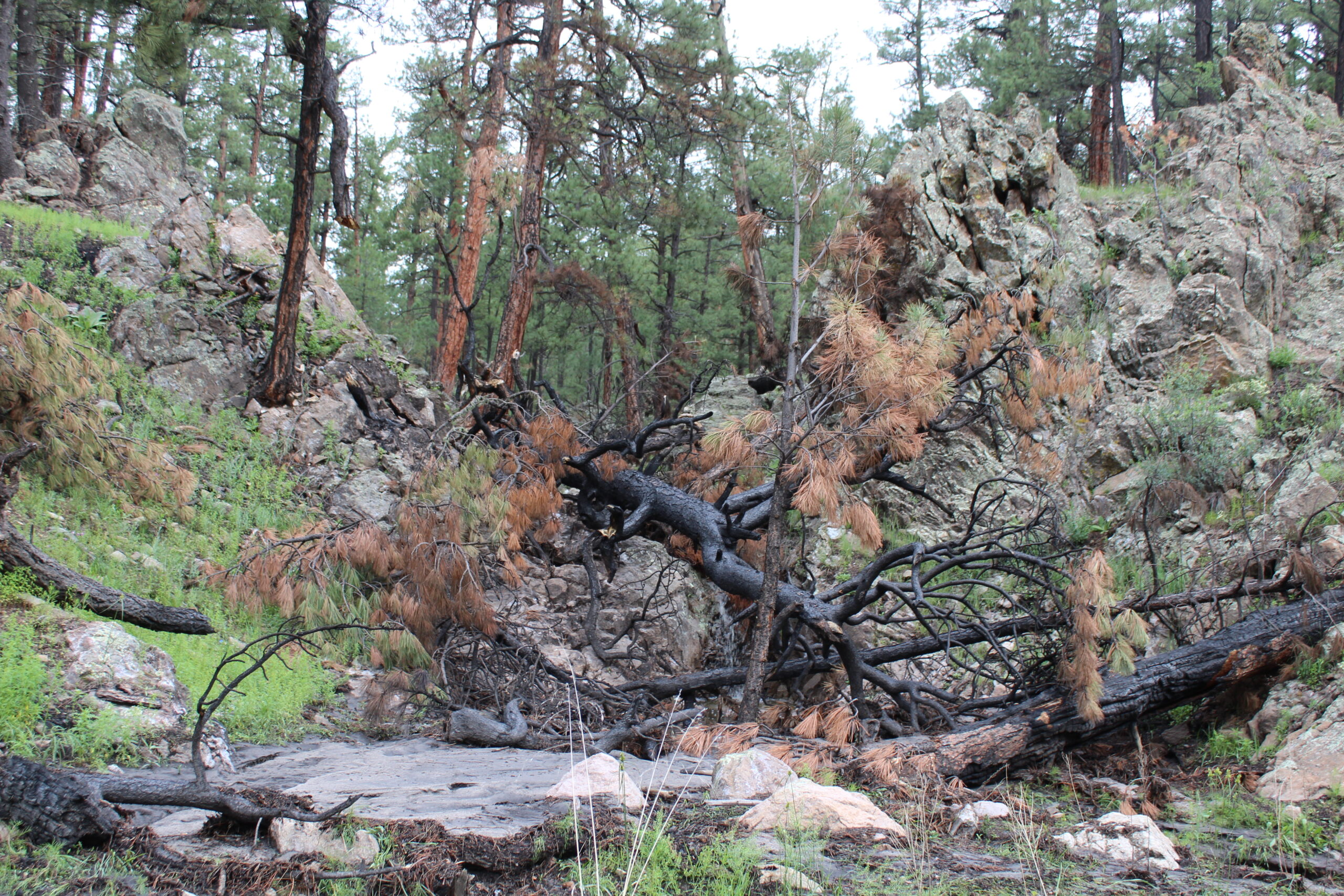 A fallen tree blackened by the Black Fire’s blaze in the Gila. Pictured on July 28, 2022. (Photo by Megan Gleason / Source NM)

All of the money from the Burned Area Rehabilitation fund is going to the Hermits Peak-Calf Canyon Fire. A lot of attention and funding has been focused on the aftermath in the north, he said, which makes sense because of how many people have been suffering up there — but damage was done down here too.

Jack Diamond said he has close ties with Sierra County Commissioner Jim Paxon, who recently spoke to a legislative panel about aid for the ranchers. He was also seeking funding for the U.S. Forest Service. He said although others are frustrated with the Forest Service because of destruction from backburns and lack of recovery funds for the ranchers, he’s not because he knows they want to help but just don’t have the money to do it.

“The Forest Service needs to come up with the dollars, and they’re trying to,” Diamond said. “They just can’t seem to get the dollars right now, but hopefully it will come about.”

The Natural Resources Conservation Service might provide funding, Matt Schneberger said, but the organization is still trying to get a sense of all the damage done. Diamond said he’s already shown them around some of his property.

“It’s hard to really think about trying to start your everyday life again, because everything’s gone,” Kaye Diamond said. “I mean, we can’t reseed it. We can’t build all of our fences. We just can’t afford it.”

‘We can’t start over’

The Diamonds have only recently started coming to terms with what’s happened because so much of their land — and the harm done to it — was inaccessible while the fire was still blazing.

“It’s worse now than what it was when it was burning because you see what needs to be done,” Jack Diamond said.

The fire didn’t look that big at first, she said. She and her husband started doing prep work around their land, like removing pine needles or creating fire barriers, about a week before the blaze got to them in addition to regularly taking care of their cattle. They haven’t stopped working since, she said.

It’s overwhelming, she said, and stress about the devastated forest and their property has been getting to both of them emotionally. 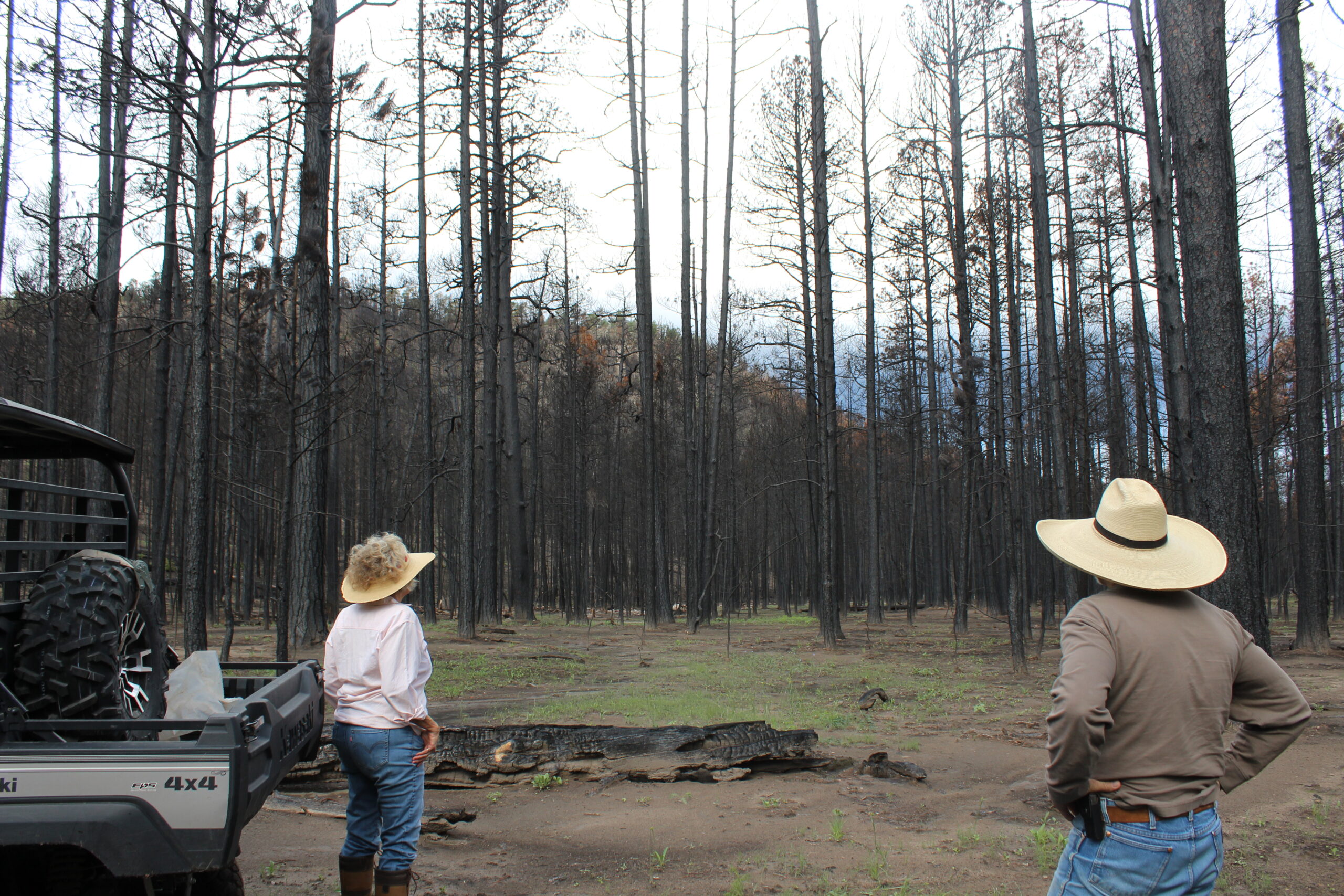 The Diamonds look over deadened trees on their property in the Gila National Forest on July 28, 2022. (Photo by Megan Gleason / Source NM)

The Schnebergers, shocked at the state of their land, are outraged at the damage from intentional fires the U.S. Forest Service lit trying to keep the wildfire at bay. They lost one of their cows from a backburn.

Looking at all the harm done to the forest and their property, Laura Schneberger said she’ll never get over it. “Anything that we didn’t have burned naturally, they burned,” she said.

The fire created chaos, she said. Now, the future may be uncertain on top of an already risky business.

“You start wondering where you’re going to be in a year,” she said.

Biden to battered Florida: ‘We’re going to do everything we can for you’