Reagan Gaona stands beside the Unfillable Chair memorial in front of Santa Fe High School in Texas. The memorial is dedicated to the eight students and two teachers killed in a May 2018 shooting. To the left is a sign displaying solidarity with Uvalde, Texas, a city that experienced a similar school shooting in May 2022. Renuka Rayasam/Kaiser Health News hide caption

In May 2018, after a high school shooting killed 10 people, the Santa Fe, Texas, Resiliency Center opened in a church. Any resident could see a counselor, attend a support group, and take part in a healing mandala coloring class, music therapy, or a workshop on emotional first aid — all free of charge.

Today, the center sits in a strip mall sandwiched between a seafood restaurant and vacant storefronts. On a recent evening, instead of patients filling the waiting room, counselors saw clients over video from their offices. The center looks empty, but according to therapists, the need is still there.

“There’s still a lot of pain,” said Jacquelyn Poteet, a chatty therapist who runs the center. About 186 people see counselors every month, but she said far more people probably need the services in the city of nearly 13,000 people. “A lot of people don’t even realize they’ve got trauma.”

Recently, she said, a former high school student had contemplated suicide. It was a “really close call,” she said. “We’re not out of the woods.”

In the past four years, millions of dollars for mental health services have flooded this city, which feels remote even though it is only 6 miles off the highway connecting Houston and Galveston. But the lesson of Santa Fe, in a year in which the US has averaged more than one mass shooting a day, is that even time and money haven’t healed the deep, lingering grief that is unique to such events. Santa Fe, like communities across the country, has been changed forever.

Most locals agree that four years after the unthinkable occurred, Santa Fe is still reeling from those 30 minutes between the 17-year-old gunman’s opening shots and his surrender to police. And they are still grappling with everything that came after — the school board fights, the City Hall turnover, the shooter’s still-delayed trial, and even conflict over the mental health offerings provided in response.

Some people are skeptical of therapists

The lasting trauma here serves as a cautionary tale for residents of Highland Park, Ill.; Uvalde, Texas; Buffalo, NY — and everywhere else affected by such violence. Santa Fe’s experience reveals both the importance and the challenge of building mental health resources quickly and sustainably, especially in communities that lacked them before the traumatizing event.

Prior to the shooting, few therapists worked directly in Santa Fe. And like several small communities in rural America, it’s a place where many people are skeptical of therapists, either not realizing they need the help or simply preferring to ignore the pain. Four years later, Santa Fe is still mired in grief, just as the federal funding that helped establish its local mental health infrastructure recedes.

After the shooting, the state created the Texas Child Mental Health Care Consortium, which includes a program that helps schools connect children to mental health specialists virtually within two weeks. But that program has been rolled out to 40% of the state’s student population so far — and it had not reached Uvalde before its May school shooting.

“In the light of Uvalde, there is a desire to make these programs fully statewide,” said Dr. David Lakey, presiding officer of the consortium and vice chancellor for health affairs at the University of Texas System. 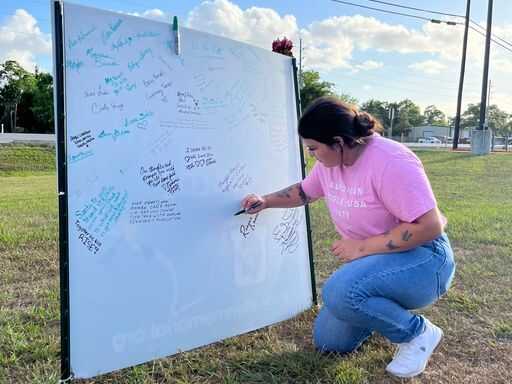 Reagan Gaona signs a tribute from students in Santa Fe, Texas, to those in Uvalde, where 19 students and two teachers were fatally shot. Renuka Rayasam/Kaiser Health News hide caption

In June, Republican Gov. Greg Abbott announced that Texas would spend $5 million for a resiliency center in Uvalde. That city, too, previously had few mental health services. Eight years ago, Congress began funding community behavioral health clinics, but they have been slow to spread across the country. A new federal effort aims to expand them further.

Communities that have experienced mass shootings illustrate the long-term reach of such trauma. In 2019, six years after Jeremy Richman’s daughter, Avielle, was killed in the Sandy Hook Elementary School shooting, he took his own life. Later that year, Columbine shooting survivor Austin Eubanks died of an accidental heroin overdose at age 37, two decades after he was wounded and his best friend was killed.

After a shooting, people would ideally have access to services through several routes: their primary care doctor, specialists in eye movement desensitization and reprocessing therapy, and even residential treatment programs, said Dr. Shaili Jain, an expert in post-traumatic stress disorder and trauma at Stanford University. “What is the future going to be for children who survive these massive traumatic events if they don’t get the mental health help they need?” she said.

Following the Santa Fe shooting in 2018, “everyone was scrambling” to organize the mental health response, said Deedra Van Ness, whose daughter witnessed the attack. Santa Fe officials and mental health groups applied for grants through the federal Victims of Crime Act Fund, which draws money from criminal fines, forfeited bonds and other federal court fees. The city set up the resiliency center in a Methodist church that the Red Cross had used for initial crisis operations because it was one of the few buildings with space in the sprawling community.

Van Ness’ daughter, Isabelle Laymance, had spent 30 minutes locked in an art room supply closet, which the shooter fired into, killing several teens. Van Ness sent Laymance, now 19, to a teen PTSD specialist in nearby Clear Lake City for nine months, which cost as much as $300 a month with insurance, before moving her to the resiliency center. There she was referred to the Trauma and Grief Center at Texas Children’s Hospital. Her visits were free, but her psychiatric medication cost about $20 a month.

Van Ness said her daughter would experience hourslong panic attacks at school, the same one where the shooting occurred. She was absent for more than 100 days during her sophomore year. At one point, Van Ness said, she and her family were going to the resiliency center daily to attend family counseling and use other services. 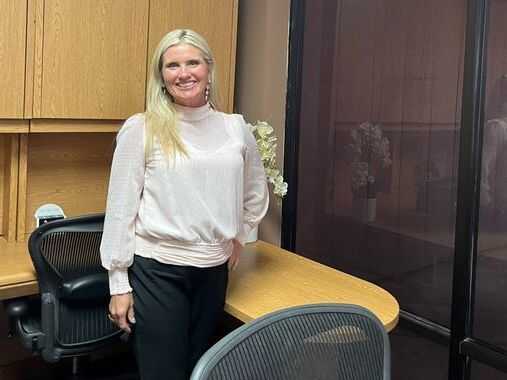 Flo Rice, a substitute teacher injured in the Santa Fe shooting, was able to connect immediately with a counselor from the Galveston Family Service Center who showed up one day in her hospital room. For years she called, texted and saw her free of charge. But Rice is forever changed. She can’t be near a school or go to restaurants. She can’t sleep without medication.

The state has given $7 million to service providers, the city and the school district through the federal crime victims’ fund in response to the shooting, according to the governor’s office. Still, the amounts have decreased every year, with some groups no longer receiving funds, according to state records.

The city doesn’t have the budget to fund such programs itself, Santa Fe Mayor Bill Pittman said.

The Santa Fe community is torn between forgetting and grieving. Memorials to the eight students and two teachers killed dot this city. An 8-foot-tall empty aluminum chair stands in front of the high school. Ten white crosses are planted in the grass next to the Maranatha Christian Center. Green and black benches made from recycled plastic lids sit at the library and the therapeutic garden behind City Hall.

Marriages and education were disrupted

The long-term emotional toll remains visible, too, according to Poteet. Many students left for college but came home after a year. Marriages fell apart. Kids turned to alcohol or drugs.

“The town is still very angry,” said Mandy Jordan, whose son has survivor’s guilt because he was late to school the day of the shooting. She and her family eventually moved away from Santa Fe. “It’s in the air almost.”

So far, though, no suicides linked to the shooting have occurred. “It’s by the grace of God that has not happened,” Poteet said. 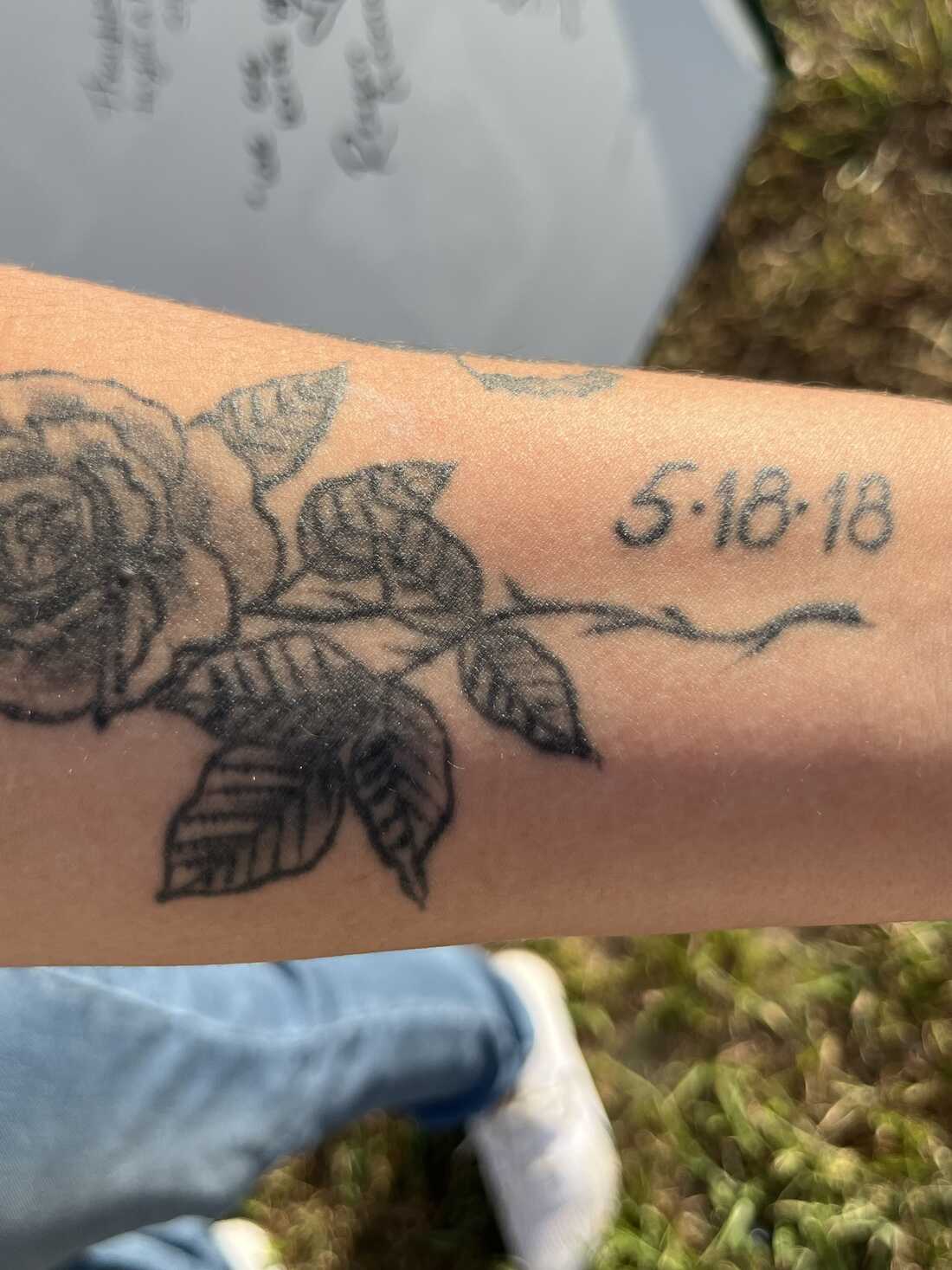 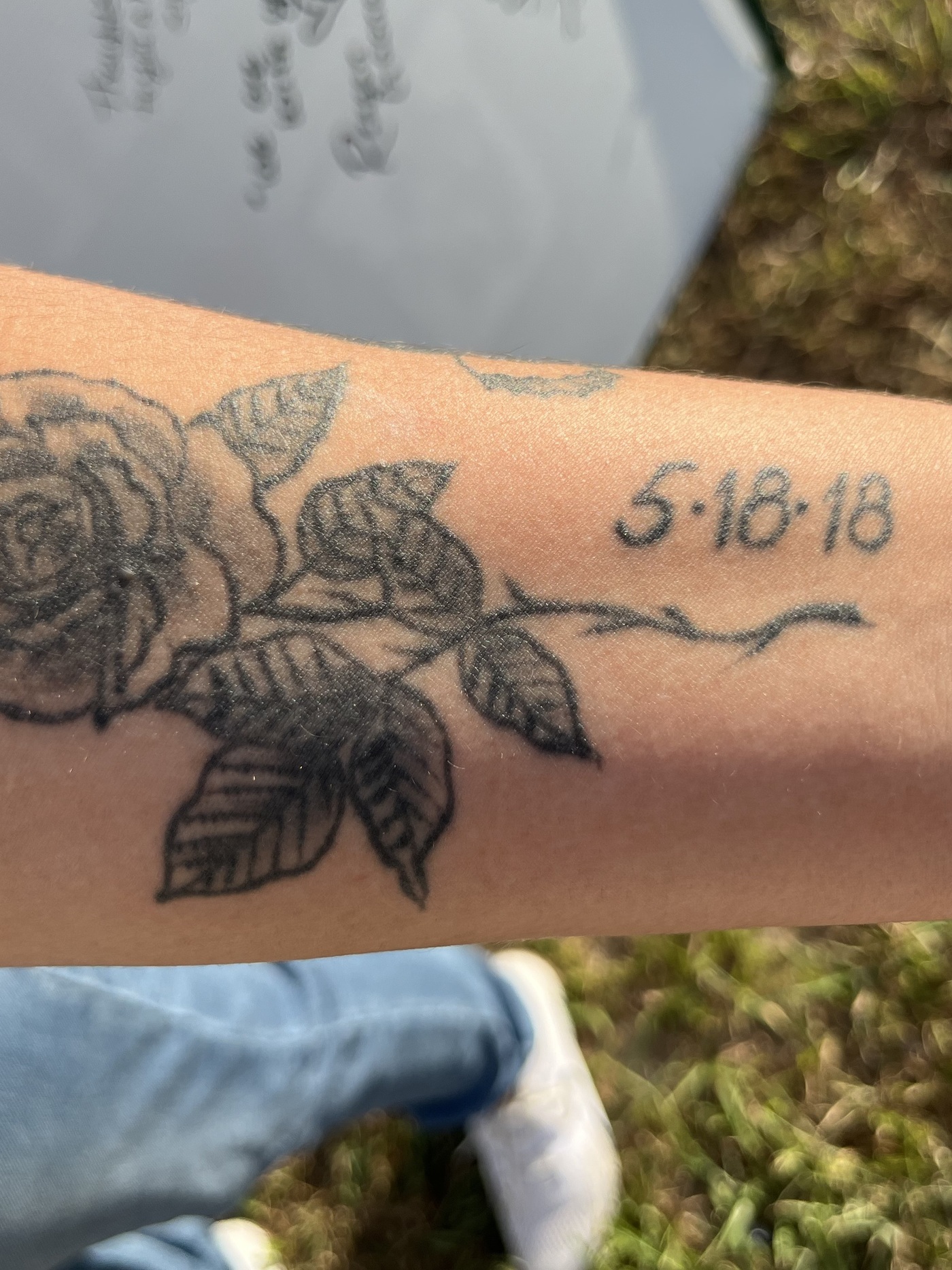 Reagan Gaona’s rose tattoo includes the date of the Santa Fe High School shooting: May 18, 2018. Her boyfriend, Chris Stone, was among those killed.

Reagan Gaona, 19, credits a therapist for helping to save her life. Gaona was finishing her sophomore year when her boyfriend, Chris Stone, was killed at the school. It took three therapists to find the right fit. Now, on one side of Gaona’s left forearm, she has a tattoo of a rose alongside the date of the shooting, May 18, 2018, and on the other side butterflies with semicolons as bodies, signifying mental health awareness and suicide prevention. It represents “that I am flying out of my depression and that I am growing my wings,” she said. “That I am beautiful.”

Gaona has regular panic attacks and anxiety-related muscle spasms. She attended college in Kansas for a year on a softball scholarship before moving back to the area. She feels better, but said she also “feels empty.”

The shooting also derailed Laymance’s plans. She had intended to go to college on a bowling scholarship to study interior design.

But PTSD has been a major obstacle. She suffers from short-term memory loss. When she went to orientation at a junior college, she felt unsafe hearing about Texas’ open-carry policy on campus. She wants to go — and study psychology — but for now, she’s working as an assistant manager at Sonic, a fast-food restaurant.

Van Ness said the person her daughter was that day died. Her daughter is working on trying to figure out who she is now.

“We’re just as proud of her progress as we would’ve been with pretty much any decision she chose,” Van Ness said, “as long as she continues to choose life.”

If you or someone you know may be considering suicide, contact the National Suicide Prevention Lifeline at 988.

Big Pharma Went All In to Kill Drug Pricing Negotiations