Seated on a couch in downtown West Hollywood, her peroxided Afro in an orange headwrap and her elderly white terrier sprawled across her lap, the singer known as Lady Blackbird is seething. Moments before we’d been chatting amiably about her acclaimed 2021 debut Black Acid Soul, a work whose raw power and stripped down beauty have seen her hailed as the Grace Jones of jazz, and a soul sister to the iconic Nina Simone.

But I have just asked Lady Blackbird how she feels as a woman (as it happens, a queer black woman) living in America right now, what with the overturning of Roe V Wade and the rolling back of women’s rights. She’d probably agree that it’s been a hell of a few years for women and people of color in the USA.

“I feel as angry as every other woman at having so much taken away. At being told what to do with your body.” Her eyes flash. “It’s appalling. Disgusting.”

Lady Blackbird didn’t set out to be any kind of activist. She’d recorded her cover of Simone’s 1966 civil rights anthem Blackbird a year before the eruption of the Black Lives Matter movement, channeling the song’s grace and despair with a voice all the more forceful for its sense of holding back. But delays around the release of Black Acid Soul – its 11 tracks mostly comprising leftfield Sixties tunes once performed by the likes of Sam Cooke, Tim Hardin and The James Gang – meant that it dropped deep into the zeitgeist.

When the song Blackbird was released as a single at the end of May 2020, two days after the murder of George Floyd, it hit a cultural nerve.

“That song definitely needed a moment,” she says. “I used to listen to it on repeat for hours, getting into its bones, imagining myself singing it onstage. It still rings so f**kng disgustingly true. I thought ‘This has to be done’.”

Thus began the transformation of Marley Munroe – the daughter of evangelical Christians from the small town of Farmington, New Mexico, and a longtime professional session singer – songwriter (she wrote and sang backing vocals for Anastacia’s 2014 hit Staring at the Sun) and belter of old rock and shiny R&B.

With her friend and collaborator, Grammy-nominated musician/producer Chris Seefried, she recorded her vocals a capella then let her band build on what they heard. The resulting vibe – spare, sorrowful, punished with danger – informed both the spirit of the album and Munroe’s new persona.

“The name just came out in an ‘aha!’ moment in the studio,” she says. “Lady Blackbird is really the product of my lifetime of performing music, from standing on a crate aged five so my little ass could reach the microphone in church, to my journey through different genres [including a teenaged foray into Christian rock and a short-lived 2013 deal with Epic Records]. Through much trying to get people to listen.”

Her honorific alias speaks to the divas she grew up pretending to be: Simone. Ella Fitzgerald. Billie Holiday – Lady Day – a portrait of whom hangs in a frame on the wall above Blackbird’s head. When I mention the artwork she smiles and swivels to look, dislodging her terrier, Reginald, from her kaftan-covered knees. He stands on the arm of the couch, staring into the courtyard garden that Blackbird and her girlfriend planted during the pandemic. 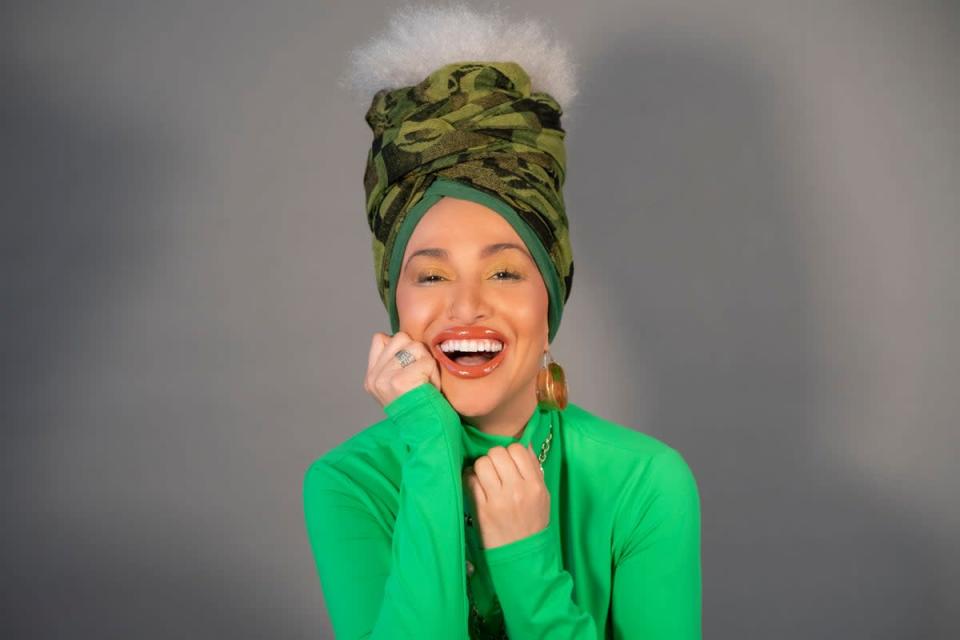 That was months before Blackbird flew into the UK to perform her arresting take on the deep soul treasure It’s Not That Easy on Later… With Jools Holland, going on to wow London venues including the Jazz Café and Union Chapel and supporting soul-jazz crooner Gregory Porter on his UK tour.

Along the way she tested positive for Covid. “Not this time, thank you very much,” says Blackbird of her two headline dates at next month’s EFG London Jazz Festival, one of which sees her playing the Barbican, where Simone performed in 1997. “I’ve been fascinated by London since forever. The fashion. the music I am so grateful to everybody in London and the rest of the UK and Europe for their support and love. It’s beautiful.”

Another smile. “Oh, and I intend to see as much jazz as I can.”

That jazz has given her career wings is perhaps unsurprising; the genre is malleable enough to absorb Black Acid Soul’s elements of rock, soul and psychedelia (the title track, subtitled Jackson Pollock Jam, has a gleeful, throw-everything-at-it mania) while still going its own way.

“We wanted my vocals to be the focal point of this album. We wanted vulnerability, brokenness, healing. There is such a freedom and expressivity in jazz which I love,” she continues, “and do my best to represent.”

She places a hand on her breastbone and its tattoo of an Egyptian ankh, the hieroglyphic symbolizing eternal life. “I am in no way worthy of the comparisons I attract. I just do what I do out of the purest part of me,” she says.

After being swiftly touted as an overnight success – “Ha!” – Lady Blackbird is now up for gongs including International Act of the Year at Thursday’s Jazz FM Awards. Her fellow nominees include lauded UK collective Kokoroko and New Orleans musician Trombone Shorty, who guests on jazz trumpet on a track on Black Acid Soul, and whose Seefried-produced album Lifted features vocal and writing contributions by Lady Blackbird.

“Music is everything to me and I enjoy sharing what I love,” says Blackbird, whose savvy UK-based manager and collaborator, Ross Allen of Foundation Music, upped her kudos and extended her reach by commissioning a handful of British electro, jazz and funk luminaries – Ashley Beedle, Greg Foat, Emma Jean Thackray – to remix several tunes on the album.

But as well as earning kudos on the scene, she is firmly breaking into the mainstream too, as shown by the album’s re-release at the end of the month in a deluxe edition featuring five new, largely upbeat tracks. These include I Am What I Am, the ballsy Shirley Bassey/Gloria Gaynor-sung anthem that Blackbird recorded for the Virgin Atlantic ‘See the World Differently’ campaign, and current single Feel It Comin, a Seefried/Blackbird-penned ode to the changing views around sexuality and gender identity, to acceptance and inclusivity and joy.

“As a member of the LGBTQIA community I know there is power in marking the wins,” she has said in the past. “We wanted to tell a modern story,” she tells me now.

Her follow up single, Woman, is an anthem of female empowerment; a riposte to those who would dare try and tell a woman what she should do with her dress, her body, her life.

“It starts off right in the Garden of Eden, but with Eve talking to Eve in a really positive way. ‘Ever since the dawn of Man, Woman …’” she recites. “’Doesn’t matter where you are, we are helpless in the hands of a woman …’

“It’s about strength,” she adds. “Those inner reserves.” Lady Blackbird pauses, flashes a grin. “We’re all stronger than we realize.”