The unearthly landscapes of the Bisti Badlands

Utah is filled with otherworldly landscapes and sculpted rocks—from the mountains of Manco’s Shale outside of Cainesville to the adobe spiers of Moab’s own backyard. After leaving the decidedly grounded East Coast environments of my own childhood, I thought I’d seen the full range of unearthly vistas of the West.

The chocolate hoodoos under a blue sky. Note the transition from mottled ground to smooth rock.
Photos by Sophia Fischer

Dear reader, I come to you with this Tale of Trail to tell you that I was absolutely wrong.

The Bisti Badlands, tucked away 36 miles south of Farmington, New Mexico, offered a landscape miles wilder than anything I’ve seen in the Beehive State. The experience turned out to be nothing short of psychedelic.

Of course, the desert has long been associated with hallucinations—synthetic and organic compounds that create a powerful synergy with stark, unreal vistas. But in the Bisti Badlands I met the death of that synergy, for the very landscape filled me with transcendental wonder. 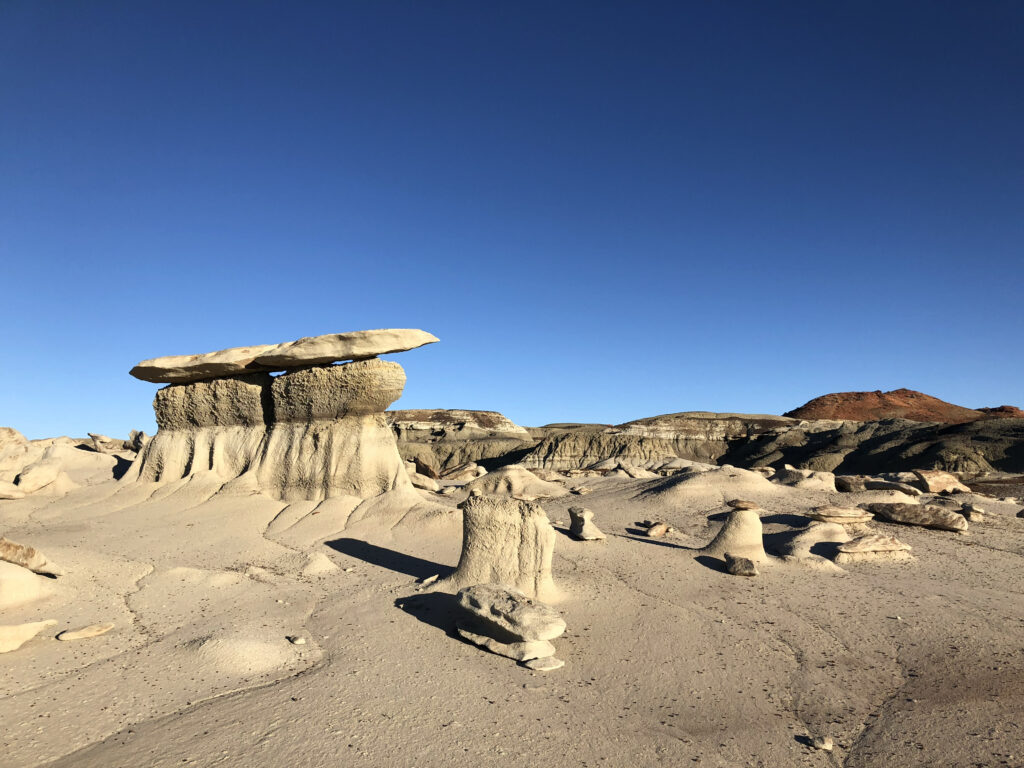 To reach the Badlands, head south on Highway 371 from Farmington and drive through vast agricultural landscapes to reach the graying tundra. Turn left (east) and travel east one mile and north along a wide gravel road to reach a large parking lot, picnic table and new pit toilet(!).

After parking, head east from the parking lot. There are no formations yet; You’ll know you’re going in the right direction when you slip through a cattle fence. The landscape offers no hue at this point – just a vast gray wash with gray dunes far to the south. Make sure a GPS route has been downloaded and your device is fully charged. You will need it. 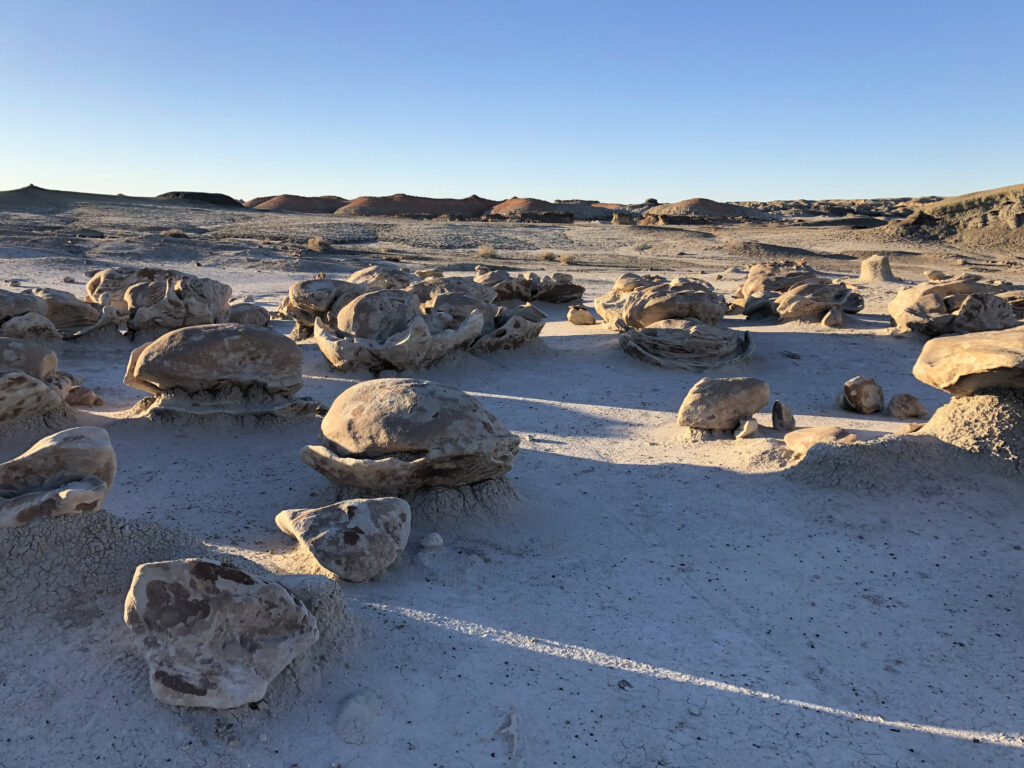 While I generally hate any kind of screen usage on trails – and feeling like a Pokemon Go player staring at my device – I would have gotten terribly lost otherwise and must urge you to check at least every few minutes. No path is trodden, and footprints mark the land in every way.

I chose to follow AllTrails’ curated 5.5 mile loop rather than simply hike through the variety of badlands. The AllTrails route meanders between various formations with quirky names – chocolate hoodoos, cracked eggs, rock gardens. 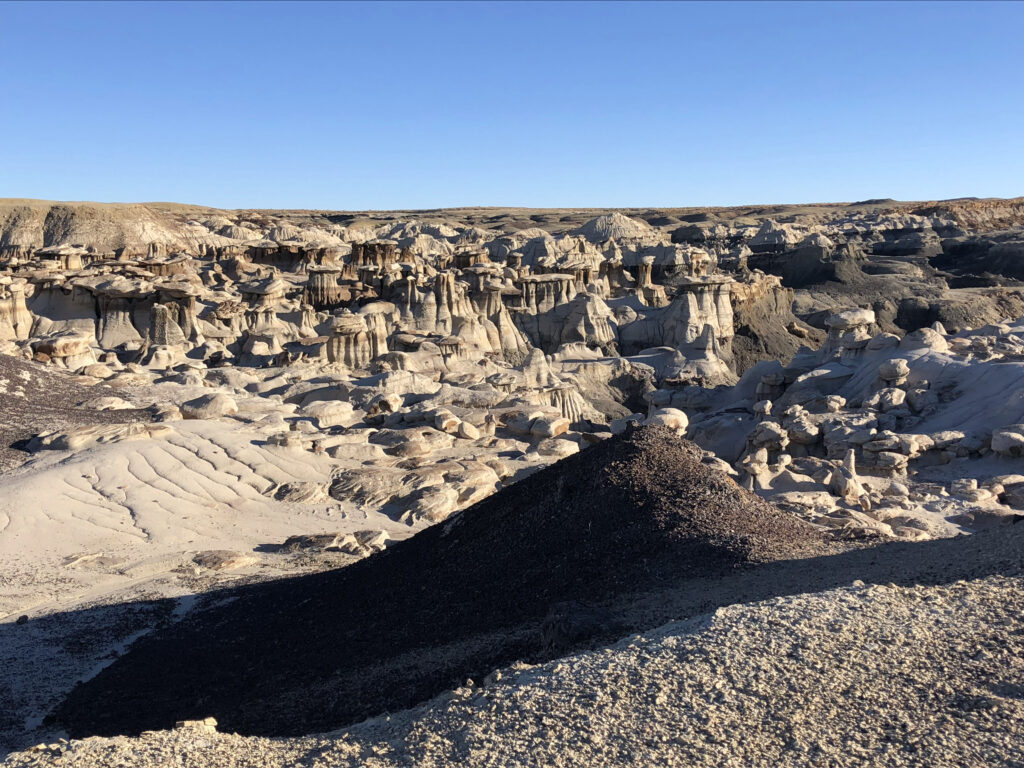 A view of the chocolate hoodoos from above – or a forest of fossilized mushrooms.

After going through the fence, I quickly turned right (south) into some nondescript gray dunes—nondescript, that is, until I went inside. Then I began to eye their thick, brittle exteriors: mottled gray slopes streaked in dark purple. These hills rose 15 feet in the air and soon cut me off from the main east-west curve.

After trekking through the dunes for maybe half a mile—and taking multiple wrong turns, despite my frequent phone checks—I began to notice scattered fields of bone-white jewelry and tchotchkes among the gray. Rising elegantly from the ground, some of these pillars and statues resemble modern sculptures, whale bones or futuristic Singaporean architecture. Many imitated spaceships, fossilized mushrooms, or Seussian drawings.

My mind ached trying to find comparisons. If the moon hadn’t been clear in the blue sky, I’d have sworn we were on it. 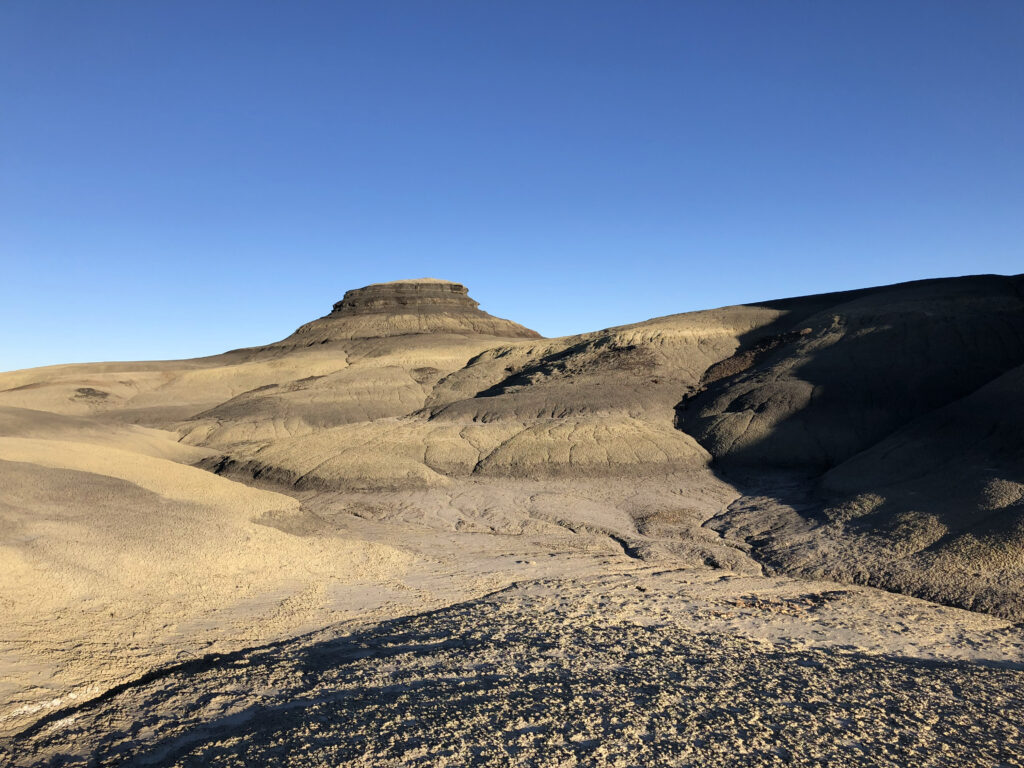 Aside from the sculptures, the Bisti Badlands consisted of long, low, gray dunes.

Finally, the trail climbs one of the dunes to the first attraction: the Chocolate Hoodoos. I came across a spacious balcony of alabaster-thing-a-ma-what-sits, which had grown like tumors straight out of the grey-purple mounds.

Formed from smooth, seamless white rock, these hoodoos looked at once more organic and alien than anything else in Goblin Valley. Many of the surfaces were brushed with fine fudge brown pebbles, which presumably inspired its cute nickname. 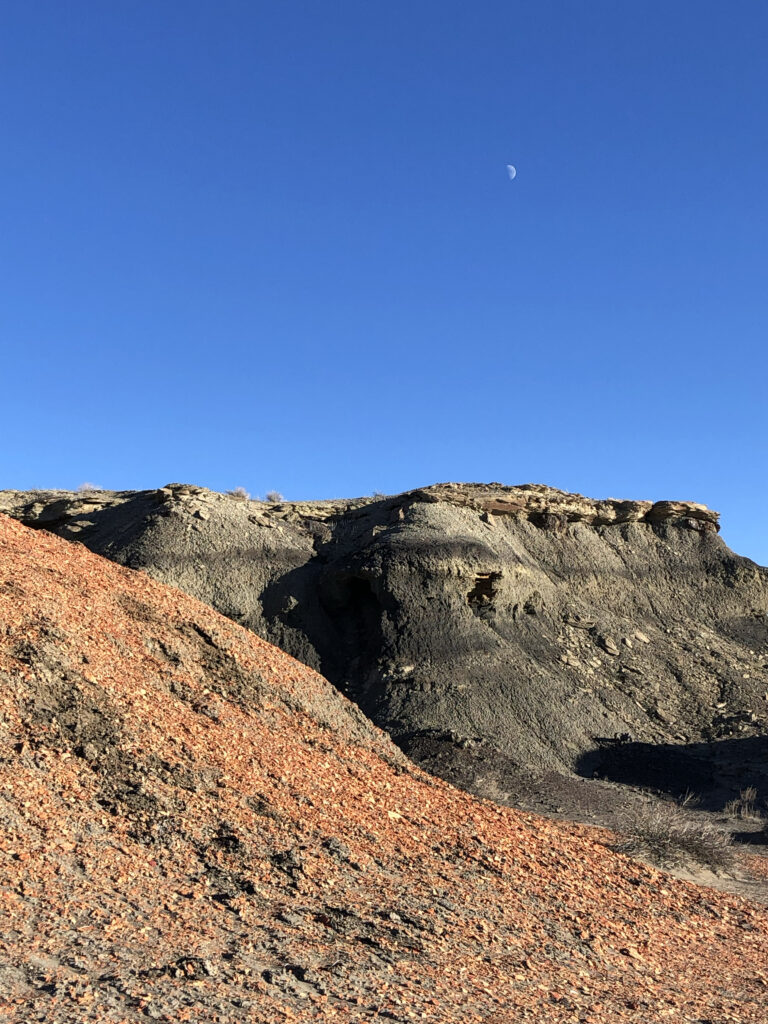 If the moon hadn’t been clear in the blue sky, I’d have sworn we were on it.

The trail exited the hoodoos and curved along a quasi-ridgeline before descending onto another small plain. Much of the hike followed this pattern, meandering past the odd attraction before crossing more dunes or a wide wash. It always ran roughly east along the southern edge of the main wash.

Next I encountered the cracked eggshells: orbs of skinning scattered across an otherwise unremarkable level. I noticed that while some formations lasted the length of a football field, other statues were truly deserted amid the gray. Formations can be as small as ping pong balls or as large as ping pong tables. I’ve seen more balanced rocks than a fist could shake.

Amidst the labyrinthine sculpture gardens, I saw few other hikers. Most appeared to be hikers rather than AllTrails users. A couple of women on tripods; They said they hoped for better light just after sunset. Indeed, since nothing eclipsed the sun, deep shadows fell across the land. I’ve also spied on copious amounts of hoofprints; Did the people here ride horses? 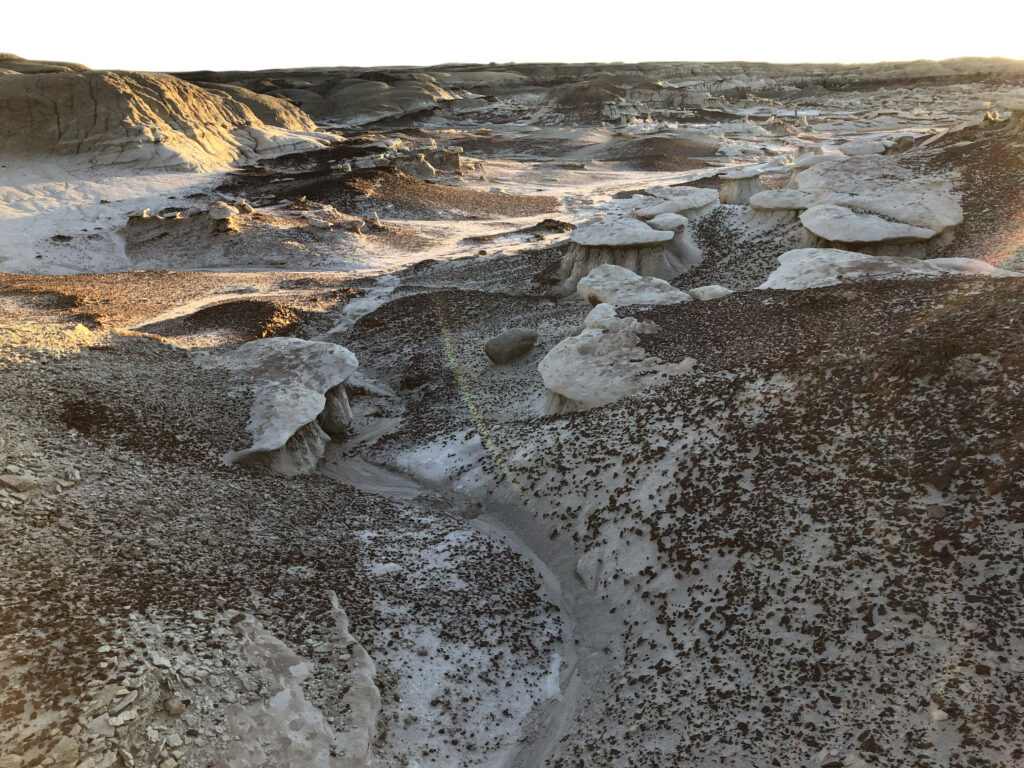 Occasionally, I encountered dunes dotted with bright red-orange pebbles, lending a burst of flame to an otherwise ashen world. Also, no dust rose to obscure my vision, although the winds did pack a hearty punch. Thank you Crypto!

Unfortunately, the fading day prevented me from reaching the final attractions of the Bisti Badlands: petrified wood, table tops, the “Eagle’s Nest”. However, with enough time, water and phone battery, you could probably wander around the increasingly unnerving structures all day. I’ll leave that to a future adventurer.

To get back to where I started, I simply walked west along the main wash for several miles and reached the cattle fence just fading on the horizon ahead of me. My mind raced with a whirlpool of thoughts, images, metaphors; but somehow I couldn’t do justice to the scene in my diary or on the phone. You have to see it to believe it – or not.