WASHINGTON — Veterans and their advocates gathered outside the U.S. Capitol on Thursday for what was supposed to be a celebration, one day after a crucial Senate vote on bipartisan legislation that would expand health care and benefits to 3.5 million veterans exposed to burn pits during their deployments.

The gathering instead became a forum for those who have been working on the bill for years to vent their frustrations with Republicans for blocking it Wednesday afternoon over objections raised by retiring Pennsylvania GOP Sen. Pat Toomey.

“The Senate is where accountability goes to die,” said Jon Stewart, celebrity comedian and longtime advocate for veterans. “These people don’t care.”

Stewart said he was used to the lies, hypocrisy and the cowardice from members of Congress, but that he wasn’t used to the cruelty, calling Toomey “a f****** coward.”

Advocate for veterans and comedian Jon Stewart speaks to reporters outside the U.S. Capitol on July 28, 2022, about the PACT Act, which would provide veterans exposed to burn pits with health care and benefits. (Photo by Jennifer Shutt / States Newsroom)

Stewart urged members of Congress to stay in Washington, D.C., until the bill is on its way to President Joe Biden, criticizing lawmakers for still planning to leave town in the days ahead for the August recess.

Obviously, I’m not a military expert, I didn’t serve in the military, but from what I understand you’re not allowed to just leave your post when the mission isn’t completed. Apparently, you take an oath. But these folks can leave, because they’re on Senate time.

Senate Majority Leader Chuck Schumer, a New York Democrat, said Thursday afternoon he plans to hold another procedural vote on Monday evening. He said he would also re-extend an offer to Toomey to offer his amendment on the floor.

“I don’t know where they came up with this. We offered Toomey, who is standing in the way, the ability to do an amendment at 60 votes, just like the bill is a 60-vote bill,” Schumer said.

Toomey instead insisted in conversations with others that he wanted his proposed changes reflected in the bill automatically without an amendment vote, Schumer said, noting he stands by his original offer.

“We will give Sen. Toomey a right to bring his amendment to the floor and try to get the votes for it,” Schumer said.

The shortage of votes to get past the Senate’s legislative filibuster during a Wednesday vote took many in the chamber by surprise, especially since senators voted 84-14 on June 16 to send the bill to the House, an overwhelming bipartisan endorsement and a victory for the sponsors, Kansas Republican Jerry Moran and Montana Democrat Jon Tester.

After making a minor change to the legislation, the House sent the package back to the Senate after a 342-88 vote on July 13.

The bill had appeared on track to get the 60 votes necessary to move toward final passage, but stalled when Republicans began voting against the bill en masse, resulting in a 55-42 vote in the evenly split chamber. 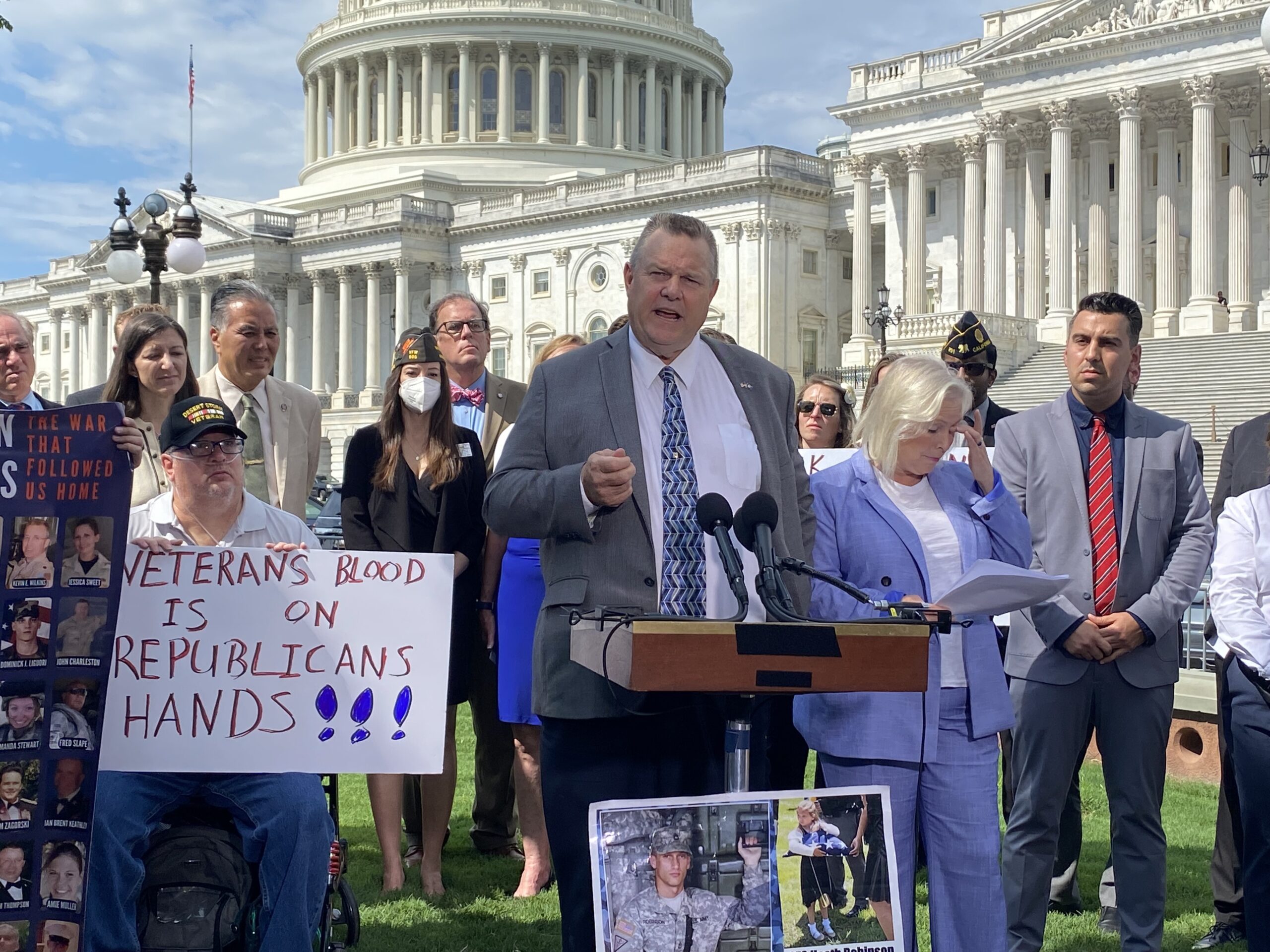 Sen. Jon Tester, (D-Montana), with veterans and family members at a press conference outside the U.S. Senate on July 28, 2022, on he PACT Act, which would provide veterans exposed to burn pits with health care and benefits. To the right is Sen, Kirsten Gillibrand, (D-New York). (Photo by Jennifer Shutt / States Newsroom)

Schumer switched his vote to a no vote before the gavel went down to make it easier for him to call up the bill again once there are at least 60 senators willing to advance the measure.

Toomey said after the failed procedural vote that he has “no quarrel with” the bill creating $278.5 billion in new spending during the next decade that would be classified as “mandatory.”

Mandatory spending tends to run on autopilot and includes programs like Social Security, Medicare and Medicaid. The other category of federal spending, known as discretionary, has to be approved annually by Congress as part of the appropriations process. That spending covers much of the federal government, including the departments of Defense, Energy, Housing and Urban Development, Interior, Transportation and State.

Toomey said his opposition to the bill comes from a section that “would authorize $400 billion over the next 10 years of existing spending … to be switched from discretionary to mandatory.”

Moran, the top Republican on the Veterans Affairs Committee, said Thursday during a brief interview that he is willing to “accept whatever solution is necessary to get it done.”

“There is a problem with this bill in the way that it’s funded,” Moran said. “My view has been, let’s get it done, and then we’ll work to fix the problem after it becomes law.”

“But we also know that there’s not a lot of leverage that exists after that occurs, so getting us there is what we’re trying to accomplish,” Moran continued.

Veterans Affairs Chairman Tester said Thursday afternoon he’s pushing to get the legislation passed before the August recess begins, though it didn’t appear there was a clear path forward to solve the dispute.

“Toomey wants to take away the ability of appropriators to do their job,” Tester said. “Every appropriator should be mad as hell about that … Unfortunately, many of the appropriators voted with Toomey. But I’m not gonna allow that to happen.”

“If we can’t trust our own ability to appropriate, fund and defund that, what the hell have we turned into?” Tester added.

Seamstresses create outfits for kids in need in Albuquerque