Things To Do In Albuquerque, New Mexico

Chances are if you know anything about Albuquerque, it’s that it is the self-proclaimed hot-air ballooning capital of the world. It’s not an undeserved title—this year marks the 50th anniversary of the International Balloon Fiesta, an event that draws hundreds of balloons and often more than a million people from across the globe.

But Albuquerque, New Mexico’s largest and most populous city, is an exciting place to visit beyond those nine days each October.

Here you’ll find adventures in the desert, opportunities to learn about Indigenous life past and present, 17 miles of the famous Route 66 (though here it’s better known as Central Avenue), an up-and-coming winery scene, and ample modern Southwest art. And that’s all with the Sandia (Spanish for watermelon) Mountains, named because of the pinkish hue in the granite peaks, as a backdrop.

That’s just the beginning. Here are eight reasons to visit Albuquerque, New Mexico, at any time of the year.

Get a better understanding of Indigenous culture

Indigenous people have called this part of the Rio Grande Valley home since time immemorial. There are myriad ways to learn about Indigenous culture, cuisine, art, and more while visiting Albuquerque.

You can see the presence of Native Americans literally etched into the volcanic rocks in Petroglyph National Monument. The National Park Service protects the designs and symbols because they’re both a record of the past and a spiritual connection for contemporary Pueblo, Navajo, and Apache people.

Within Albuquerque, one of the best ways to connect with Indigenous life is at the Indian Pueblo Cultural Center, where numerous exhibits share the history of the Pueblo people from their own perspective. Most days there are performances and art shows in the courtyard. It’s also the site of the Indian Pueblo Kitchen, where you can nosh on traditional and modern fare, ranging from blue corn onion rings to Navajo tacos.

Albuquerque’s Sandia Mountains are a hub for outdoor activities.

Albuquerque is blessed with more than 300 days of sunshine a year, making it a lovely place to spend time outside.

In the summer, mountain bikers flock to the Sandia Peak Ski Area, where they can catch a ride to the top on the chairlifts before zooming down. There are many good hiking trails, like the Volcanoes Trail, a 3.2-mile loop in Petroglyph National Monument with negligible elevation gain, and the more challenging Pino Trail, a 9-mile out-and-back affair in Albert G. Simms Park.

For kayaking and stand-up paddleboarding, the Rio Grande is a popular spot to wet your paddles. (Quiet Waters Paddling Adventures offers rentals.) And for golfers, there are 14 courses (private and city-owned) that range from grassy thoroughfares to desert link courses—something for everyone and open year-round.

And if you’re not keen on working up a sweat, you can enjoy mountaintop vistas thanks to the Sandia Peak Tram. In 15 minutes, it whisks riders to the 10,378-foot crest, where it’s possible to see much of the city and surrounding green spaces.

Regardless of the activity, remember to bring plenty of water—Albuquerque is in the high desert, so even if it’s cool, the elevation will dehydrate you faster.

Sip wine in the first state to produce it

Fun fact: New Mexico was the first state in (what is now) the United States to produce wine; its creators were the Latino people who needed it for sacramental purposes. While New Mexico lacks the same recognition as other wine regions (arguably because the vast majority of the wine made here doesn’t leave the state), it’s worth checking out, especially considering New Mexico is experiencing a wine boom.

If you don’t have a car (or a designated driver), don’t fret, as there are several wineries within Old Town, Albuquerque’s founding neighborhood. Stop into Sheehan Winery for wines made exclusively with locally grown grapes or Noisy Water Winery for reds, whites, and rosés crafted by fifth-generation New Mexico farmers.

For an indoctrination into all things New Mexico wine (but with a teacher who is gentle with instruction and heavy-handed with pours), stop by Vara Winery & Distillery’s tasting room. Wine classes are held Tuesday through Thursday at 1 pm, include (at least) six bright and fresh samples, and are led by Vara’s knowledgeable wine educator, Jennie. (If you only go for a glass, do yourself a favor and get the bubbles.)

Arguably the most popular tour in Albuquerque is the Breaking Bad RV Tour, wherein superfans visit filming locations like Walter White’s house and the car wash where the character laundered money. All of which, naturally, happens in a replica of the RV from the show.

But it’s (thankfully) not the only tour in Albuquerque. Cyclists can opt to spend an afternoon with Routes Bicycle Tours or Heritage Inspirations pedaling to some of their favorite and off-the-beaten-path destinations within the city. Art lovers can take a self-guided tour of the many murals that decorate the area. Adrenaline junkies can go paddleboarding on the Rio Grande with MST Adventures or take a bumpy ride to petroglyphs and petrified forests with New Mexico Jeep Tours. And those interested in the sometimes frightful history of Albuquerque can learn more on a late-night ghost tour.

Because it doesn’t require much water, lavender grows abundantly in the American Southwest—but Los Poblanos Historic Inn & Organic Farm is perhaps the most beautiful setting to see it.

Typically the field blooms from June to July. Guests staying at the Los Poblanos Historic Inn can sign up to help with the morning harvest, and other visitors can join a behind-the-scenes tour. Throughout the rest of the year, lavender products, including essential oils, lip balms, and infused honey are on sale in the Farm Shop.

Brunch or dinner at Campo, its James Beard–nominated restaurant, is not to be missed. All ingredients are organic, and many were grown on the property. Be sure to get the lavender latte. 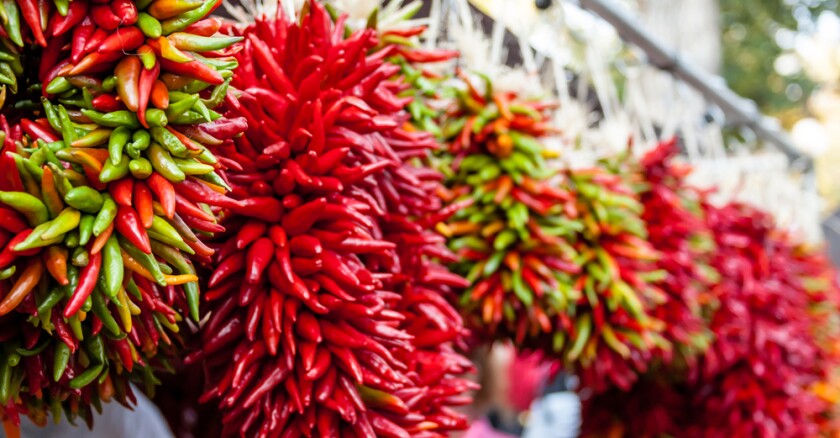 Beyond dinner plates, red and green chiles are also frequently used as decorations.

Decide between red or green (or both)

In New Mexico, a savory dish is not often served without being first smothered in red or green chile sauce. Chiles are such a vital part of New Mexican cuisine, economy, and culture that local legislators made “Red or green?” the state question in 1996.

So, whether you plan to tuck into a blue corn chicken enchilada, a fortifying breakfast burrito, or a stuffed sopapilla, have your answer ready when the server asks, “Red or green?” If you really want to look like a local (and clear out your sinuses), say “Christmas” instead—you’ll get some of both.

For nine days each October ABQ hosts the International Balloon Fiesta—the world’s largest hot air balloon event, where more than 500 hot air balloons take to the sky in one mass ascension each morning.

Throughout the day, various other balloon-related events take place, such as competitions, balloon glows (sometimes referred to as a “Twinkle Twilight Glow”), and “rodeos” of special shaped balloons (like Mr. Potato Head, a dinosaur, a spaceship, and more). There are also carnival rides and vendors selling everything from funnel cake to Navajo necklaces.

Another option for those looking for a more low-key experience is visiting one of the area breweries, cafés, and restaurants that open their patios early for watchers, like Steel Bender Brewyard and Canteen Brewhouse, to nibble on breakfast burritos and sip mimosas as balloons skim across the horizon.

Even if you’re not visiting Albuquerque during the Fiesta, chances are you’ll see some balloons aloft—good weather and flying conditions mean that local pilots, like Rainbow Ryders, take guests up almost every day.

Part of the Heritage Hotels & Resorts family (a group of minority-owned, New Mexico-based hotels), Hotel Chaco makes for a good base camp for exploring Albuquerque.

One reason is it’s within walking distance to Old Town and is across the street from the stellar Sawmill Market, New Mexico’s first food hall (its merchants include taquerias, a patisserie, a pizza joint, sushi spots, pasta parlors, and several cocktail bars) . But the more significant reason is that it subtly teaches travelers about the community. This luxury lodging draws design inspiration from the great houses in the Chaco Culture National Historical Park and is filled with artwork crafted by Indigenous painters, potters, and artisans (each room has a unique piece of weaving). Even if you don’t stay for dinner (which you should), the rooftop restaurant, Level 5, has phenomenal views.

NM Teens in Crisis Are Being Housed in Homeless Shelters — ProPublica

Titan Development, Alliance Residential and the City of Albuquerque Commission…