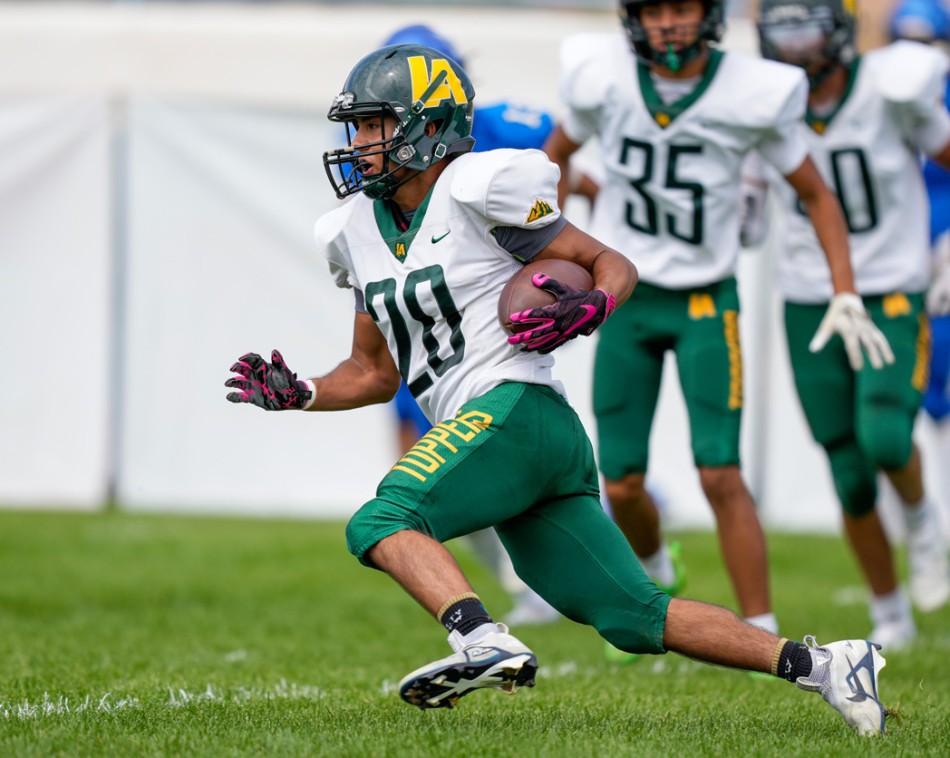 Kenny Suazo breaks out of the backfield looking for running room. Photo by Nate Limback/ladailypost.com

The Los Alamos Hilltopper offense was no match for the St. Michael’s Horsemen defense in Saturday afternoon’s football contest at Brother Abdon Field in Santa Fe.

Los Alamos managed just 50 total yards in the first half – the Hilltoppers were actually in the negative in total yardage after the first quarter – and never threatened the St. Michael’s end zone throughout Saturday’s game. The Horsemen rolled to a 45-0 victory.

That game was broadcast on the Los Alamos Daily Post’s YouTube channel.

St. Mike’s (3-0), which looks poised to make a championship run in Class 3A this season, scored three times in the first quarter, taking advantage of short fields provided by the defense. Los Alamos didn’t pick up a first down until the second quarter and rarely ventured into Horsemen territory.

The Hilltoppers (1-3) tried to use their quick passing game to the sidelines but the Horsemen defense was right there to hold the Hilltopper receivers to short gains at best.

St. Mike’s quarterback Zack Martinez had four touchdown throws in the first half, the final one coming on a 40-yard go route to the versatile Creed Chavez with just over a minute left before the break.

There were few bright spots for Los Alamos, which has now dropped three straight contests. Running back Niko Garcia, who did the bulk of the backfield duties in the second half a week earlier against Capital, also played most of the second half Saturday, and ended up leading the team with 31 yards rushing.

This coming Friday (Sept. 16) is homecoming. Los Alamos will take on Pojoaque Valley, which is winless on the season, at Sullivan Field. Game time is 7pm 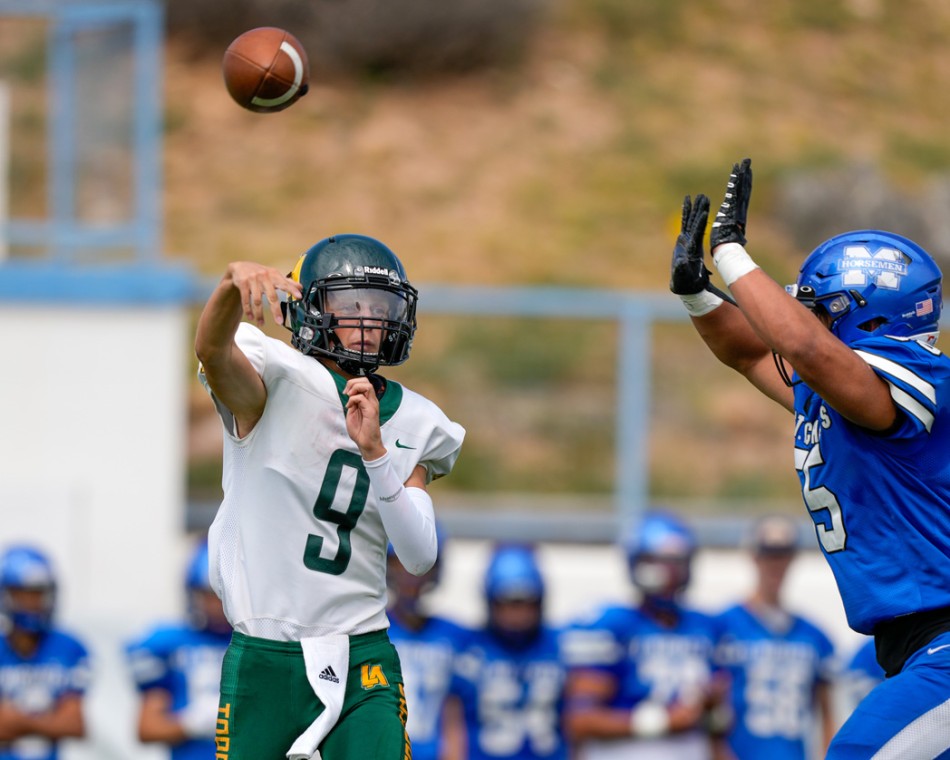 Quarterback Zack Stidham throws a sideline pass in the first half. Photo by Nate Limback/ladailypost.com

Defenseman Seth Yost makes a shoestring tackle on Marcus Leyba in the first quarter near midfield. Photo by John McHale/ladailypost.com 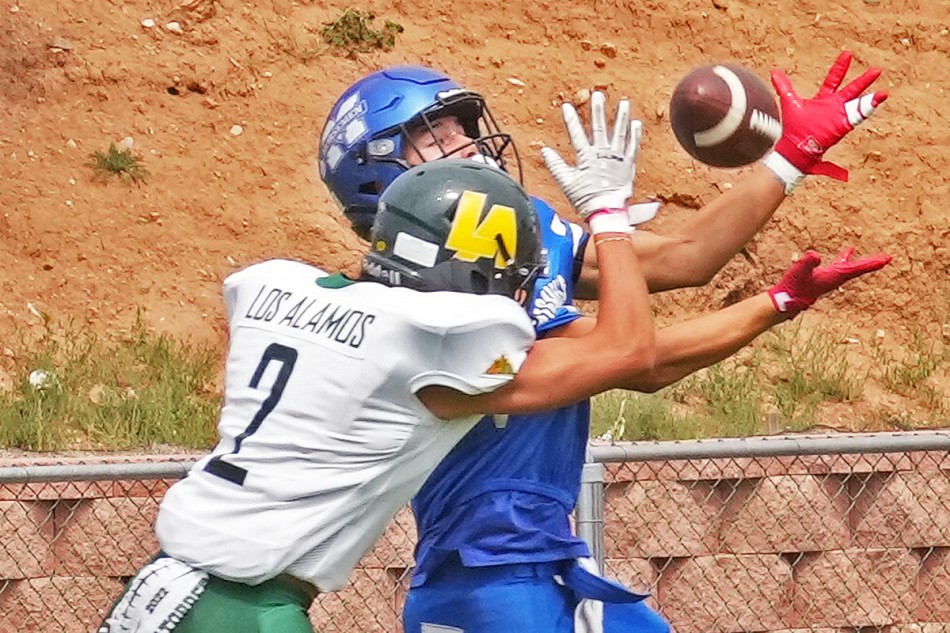 Abraham Sanchez tries to break up a pass play to Marcus Leyba near the Horseman goal. Photo by John McHale/ladailypost.com 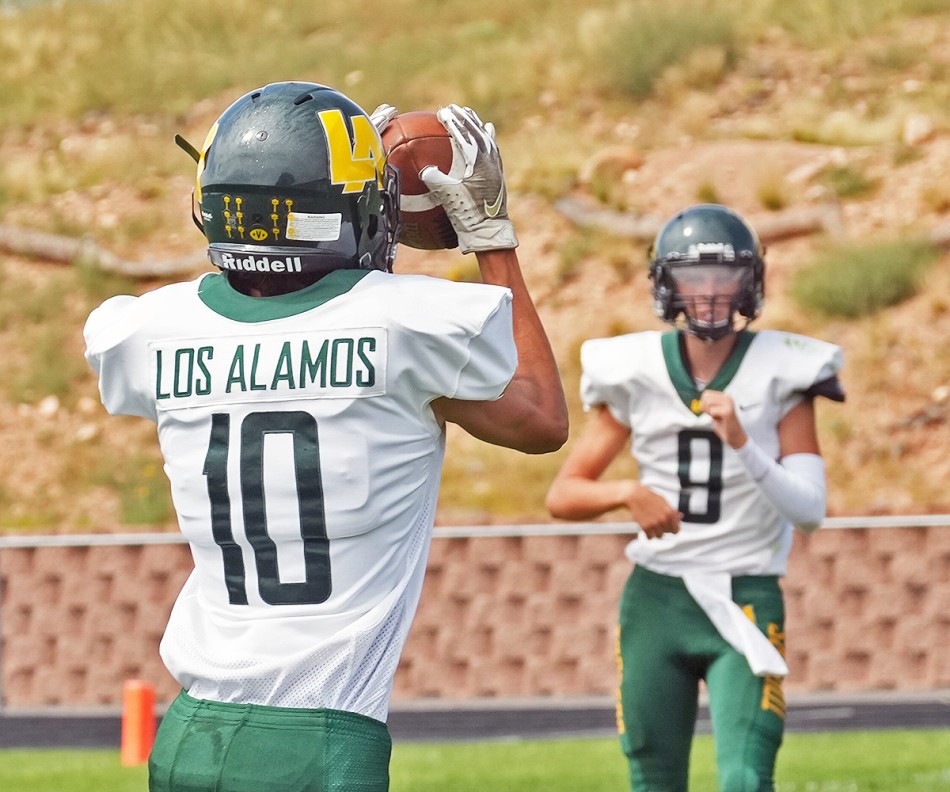 Quarterback Kyle Evenhaus completes a short pass to Haiden Jorgenson good for a first down in the 2nd quarter. Photo by John McHale/ladailypost.com

The 2024 Hyundai Santa Fe Is Getting a Big Boxy Change