U.S. Army Corps of Engineers to halt some flood mitigation help in northern NM at end of the month

The U.S. Army Corps of Engineers helping northern New Mexico counties grappling with wildfire and flooding disasters for months will be gone from a number of projects by October.

Then, it’ll be up to the state, county and other organizations to keep up the work that the Army Corps started.

The contract ends on Friday, Sept. 30.

Because flooding is expected to continue for years, the Army Corps plans to keep the protecting barriers in place. They’ll continue maintaining them until the end of the month, and then it’ll be out of their hands, Army Corps Liaison Officer Robert Zebrowski told local and federal officials on Wednesday.

Who exactly takes over depends on where the infrastructure is in place and what will be needed in the future.

Zebrowski gave local officials a tour of different sites where Kha’P’o put in debris flow barriers in Mora County, including a debris flood barrier near the main town that had recently been fixed up, and jetty jacks further into the forests protecting an acequia near Rio de la Casa.

Mora County Commissioner Veronica Serna was in attendance. She said the New Mexico Department of Transportation will take over maintenance or repairs needed on the barrier in town since it’s protecting State Highway 518, so she’s not worried about that transition.

The jetty jacks, on the other hand, would go to the New Mexico Acequia Association since the county doesn’t own the acequias.

But after voicing some concerns that the association doesn’t want to maintain the watercourses, she called Brandon Roper, who Serna said was picked to be in charge of the community acequia that the Army Corps’ infrastructure is protecting, and he agreed to clean the jetty jacks when necessary so the structures can stay in place.

“When they’re ready to clean them again, he is going to bring equipment up and he’ll pull them out, clean them and set them back in, he said, because they want to continue protecting their infrastructure,” Serna said. 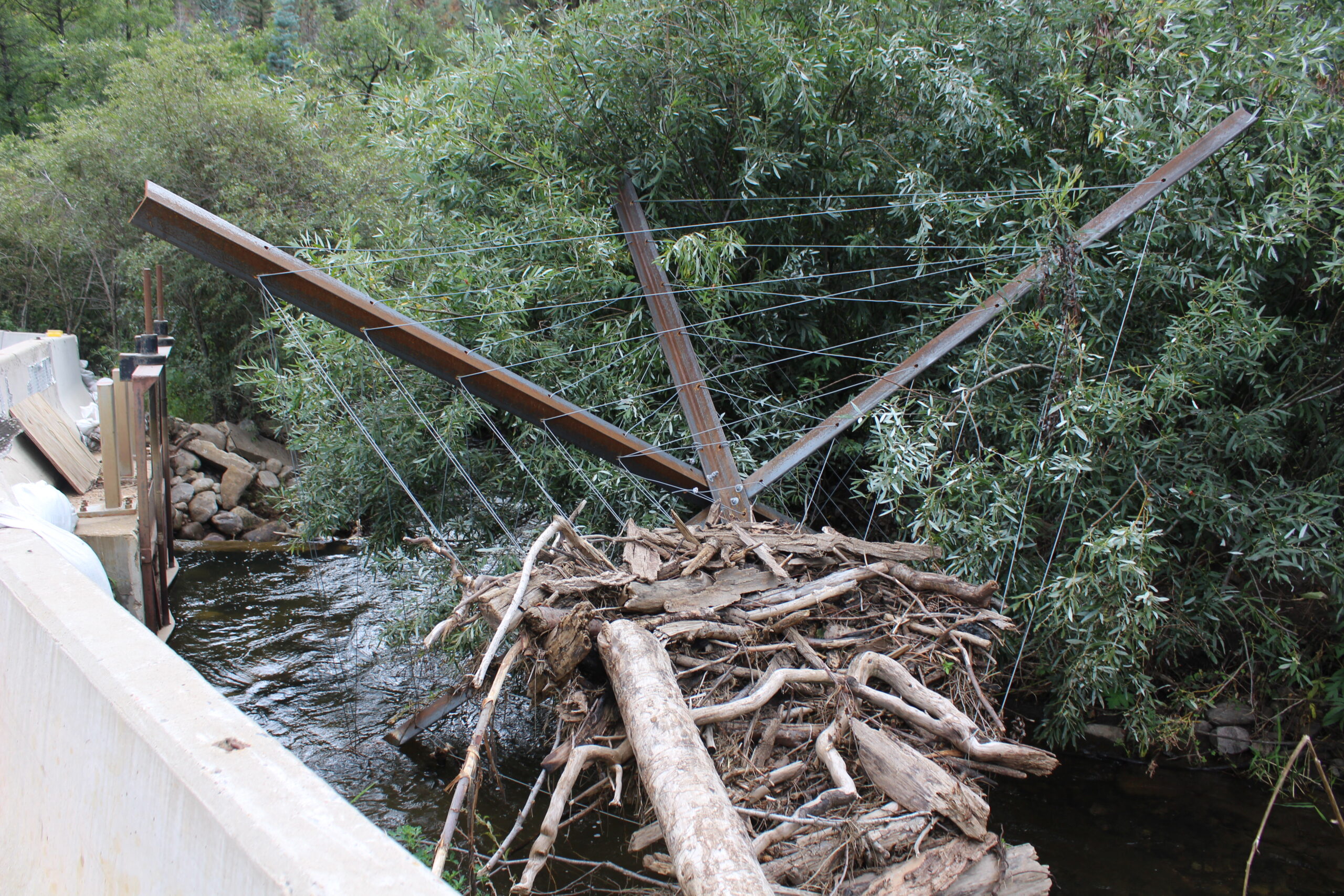 A jetty jack in Mora County collects logs and other debris to protect an acequia. Pictured on Wednesday, Sept. 14. (Photo by Megan Gleason / Source NM)

Kha’P’o can only clean the jetty jacks in specific situations, so the plan is to have them clean it for the last time on Sept. 30 before Roper takes over the maintenance. Even after monsoon season ends, Zebrowski warned the county to be careful of melting snow that could cause more flooding.

“If it gets pulled out, we are expecting worse flooding or continuous flooding for the next few years,” Serna said. “I mean, this is our opportunity to either continue protecting it or not.”

The jetty jacks should be good for at least five years, Serna said, but an issue arises if they get damaged and need repairs. Someone has to cover the costs. Zebrowski suggested asking FEMA for reimbursement.

“At least before anyone does anything, I would try to have a discussion with FEMA,” Zebrowski said.

Once the county wants to remove the infrastructure, it’s still up to them to get it done or delegate it, Zebrowski said. The county could consult the Army Corps, too, he said.

“Whenever you guys think it’s no longer serving a purpose,” Zebrowski said, “or the threats, you know, are gone, or they’re just too unsightly, maintenance is too much, it’s on the county.”

New Isotope Tovar makes a blast of a first impression

$2,700 Ambulance Bill Pulled Back From Collections

Few Places Have More Medical Debt Than Dallas-Fort Worth, but Hospitals There Are…