The realities of the Club Q shooting in Colorado Springs were close to home for many in Albuquerque, and people gathered in Morningside Park on Tuesday evening to grieve the lives lost in the queer bar. Several people knew people at the club on Saturday, Nov. 19, and many at the vigil frequented it themselves.

“I spent all of Sunday in a haze,” said Alex Mirabal, local organizer and burlesque performer. “It felt like a nightmare. It felt like it was unreal. I kept expecting to wake up and be like, ‘Oh, none of this actually happened.’ And then yesterday was a lot of rage … And a lot of ‘It’s time to get active again.’”

After a moment of silence at the vigil, the space was open for anyone to share songs, prayers or words. Mirabal organized the event alongside Judy Lopas, both part of the PFLAG chapter in Albuquerque, an organization that advocates for LGBTQ people and their families.

Mirabel has also headlined at Club Q herself, knows performers in Colorado Springs and had friends who performed at Club Q the day of the shooting.

While everyone Mirabal knew survived, she said she still felt the loss and pain of others, “because there were still five people who were dead. It wasn’t my personal friends, but somebody was missing,” she said. “And that was awful.”

She said she felt the need to be able to grieve with others in her community.

Candles and rainbow flags in Albuquerque’s Morningside Park, where people gathered to honor the lives of those killed in the Club Q shooting on Saturday, Nov. 19, 2022 in Colorado Springs. (Photo by Maddie Pukite for Source NM)

Bars have long been a heart of the LGBTQ community, a place to take refuge and be authentically yourself without fear of judgment. For many gathered in the park in the cold as the sun went down, Club Q was one of those places. Many said it felt like home, including D’Lite Deleon, the reigning monarch of the Imperial Sovereign Court of New Mexico who had just taken a trip to Club Q.

“My husband and I, we were there with our family last week, and for those of you that didn’t know that, they treated you like that,” Deleon said. “You are always welcome to be with them. They never shy away from you. They always accepted you and welcomed you no matter who you were, what you were doing, what you’re wearing. They were amazing people, and we all know it.”

The gathering to honor those killed at Club Q was held in the same park where every June during Albuquerque’s Pride events, there’s a vigil for LGBTQ people who’ve died. Kuveni Scanlan remembered the heartache of having more names to write each year.

“On this concrete, we write the names of the people that we lost. And every single year, I have a new name to write. Every single year, my list gets longer. And the period of time between the two dates that are right under the name get shorter,” Scanlan said. “I’m sick and tired of 35-year-olds being queer elders.”

The shooting in Colorado happened just before midnight on the eve of the annual Transgender Day of Remembrance, a commemoration of hundreds of people killed each year globally.

Tuesday’s vigil for many was also an act of continued queer resistance, a struggle that many emphasized did not end when gay marriage was legalized. 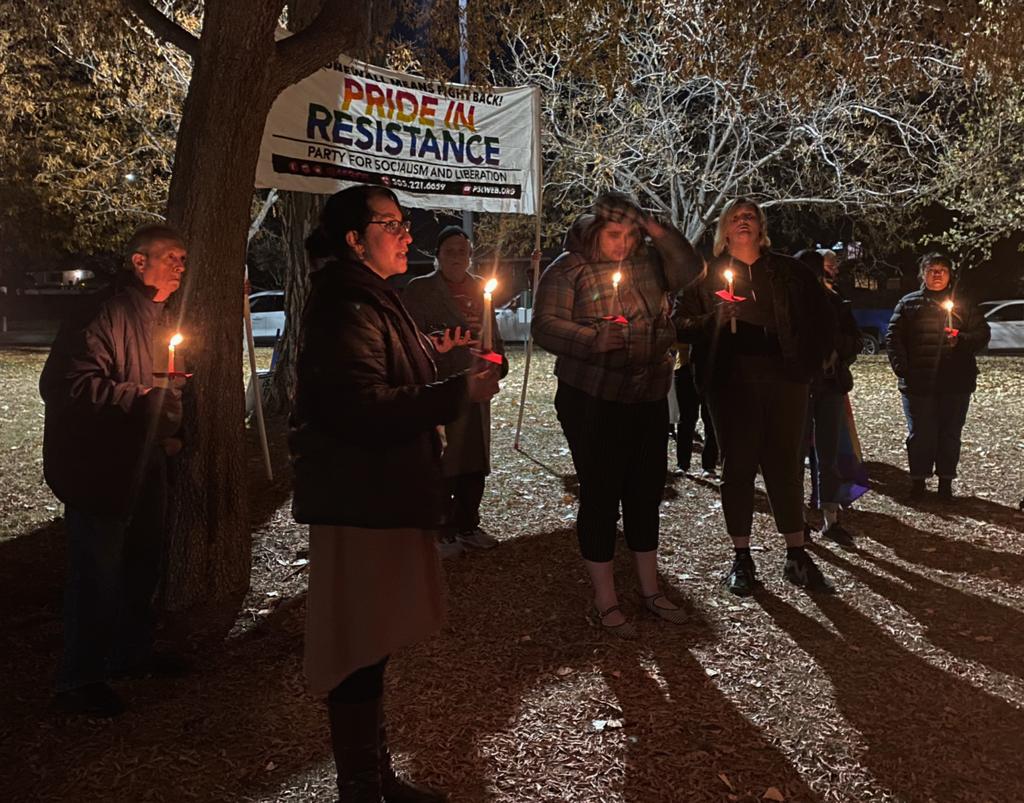 Alex Mirabal speaks to those gathered in Albuquerque’s Morningside Park, while she holds a candle to honor those who lost their lives at Club Q during a mass shooting that began close to midnight on Saturday, Nov. 19, 2022 in Colorado Springs. (Photo by Maddie Pukite for Source NM)

For Miss New Mexico Pride Sativa Rico Stratton, who has many friends who go to Club Q regularly, the shooting was also deeply personal.

“It’s not going to end with Club Q. So we need to make sure that we are out in the community, and we are helping and guiding each other, and that we are supporting our youth, and we are chanting,” Stratton said. “We are teaching them that the fight will never be over. It may get easier, but it’s not going away.”

After deaths like these, Mirabal said the violence does change what runs through her head while performing. She thinks about how to try and keep others and herself safe in such a scenario.

That’s why, she said, it is important to move forward with love: to keep each other safe.

As utilities spend billions on transmission, support builds for independent…

Congress knows how to slash child poverty. It just needs to do it.