According to Novogradac Research, LIHTC income limits could be lowered by 3.5% in fiscal 2023

Due to limitations in data collection, the Census Bureau announced in October that it would not publish a one-year American Community Survey (ACS) for 2020.

The announcement is expected to impact countless affordable residential properties, likely changing the way income and rent caps are calculated for FY 2023.

According to research by Novogradac’s Income Limits Working Group, in more than 80% of the statistical metropolitan areas (MSA) the limits for the median income (AMI) of the areas could be 3.5% lower than previously expected.

The possible result results from the calculation of the income and rent limits. In the absence of the one-year ACS for 2020, the US Department of Housing and Urban Development (HUD) could switch to using data collected over a five-year period, as it normally does for incidents for which there is no reliable one Data there. Year ACS estimate.

The challenges of data collection in 2020 will only be felt in FY 2023 due to the timing of the collection and publication of the information. HUD takes ACS numbers from three years prior to the income limit year and combines them with consumer price index (CPI) data to calculate income limits.

The reason for the change is because of difficulties in collecting data in 2020. The Census Bureau said its staff had a high non-response rate from people with lower incomes, lower educational attainments and less likely to own a home. Due to a lack of data, the Census Bureau will not publish an annual ACS. However, it said it believed it had enough data to publish a five-year ACS.

In creating a five-year ACS, the Census Bureau determines the median income of all responses received over the five-year period and does not exaggerate or correct any data from previous years. This means that in areas with rising income limits, the five-year ACS will be lower than the one-year ACS.

The Novogradac working group was looking for a window on how the change could affect rents and income limits. Novogradac examined the historical variance between the one-year and five-year ACS for all MSAs in the country for the ACS years ending 2017-2019, the last available years. The initial analysis focused on MSAs as they cover more than 75% of the United States population and smaller counties are unlikely to have a reliable ACS estimate for a year.

All eight areas with more than 5 million people had a higher one-year ACS than the five-year ACS in all three years. In the 10 largest MSAs, if the 5-year ACS data had been used, the AMI would have decreased by an average of 5%.

This analysis does not mean that incomes will, on average, be 3.5% lower than in 2022. It does mean that the boundaries will grow 3.5% more slowly than usual. If for an area based on the annual ACS an increase of If 5% were forecast in 2023, this area would still show an increase over 2022, but the increase would be due to the use of the 5 year ACS. For an area projected to increase by 2%, this change would result in a decrease in median income of minus 1.5% in 2022.

MSAs with the biggest changes 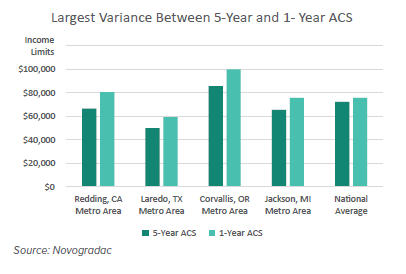 It is not a given that all MSAs use the five-year data, even though the HUD has historically adjusted the income calculations for specific circumstances. An example is a period in the early 2000s known as
“Re-benchmarking” that spawned the use of ACS data.

In the case of managed properties, these owners are “held harmless” when the rent limits fall, ie they can continue to use the higher income limit from the previous year. So if the income and rent limits were to drop, existing projects in this area would have flat-rate rents and flat-rate income limits for that period. Although the rent cap can remain unchanged, the net rent may decrease due to increases in utility allowances. This means that the net income can go down, although the rent limit remains unchanged. 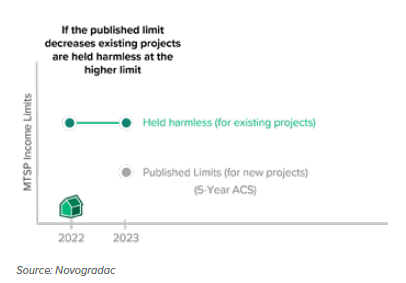 The exemption rule for LIHTC developments begins with the commissioning of a property. Developers expecting a property to go live in 2023 need to be careful about when it will go live and how that will affect their gross rent and leases. A lower income limit would affect not only the rent that can be charged, but also who is entitled to housing. In areas with sharp AMI declines, it could be difficult to find suitable tenants. Usually, HUD income limits are released on April 1st of each year.

Rents and income are specific to the area and project. Developers should review rental forecasts, buy Novogradac rental and income limit estimates for 2023 as soon as they become available, and plan for worst-case scenario.

At a later date, the Census Bureau will have sufficient ACS data to produce a one-year ACS survey. When this happens, the income limits should be reset back to where they should have been below the one-year ACS. However, at this point in time, we don’t know when it will, or if all areas will recover at the same time.

Given the circumstances surrounding COVID-19, chances are the Census Bureau has encountered the same difficulties collecting ACS data again this year, meaning FY 2024 can rely on five-year averages as well. 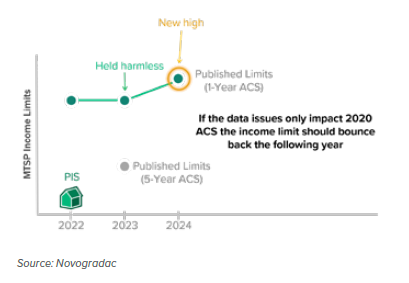 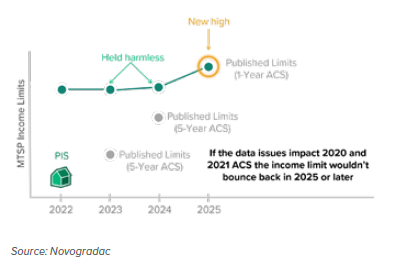 For 2020, the Census Bureau announced that it will not publish any official ACS figures for one year. However, in the future, if the Census Bureau determines that some MSAs have sufficient data for annual ACS and some areas do not, there might be an adjustment period as different MSAs are able to provide annual surveys on variable schedules. Creating a split between areas that rely on annual records while others are still using five-year averages.

Income limits for other programs

It is important to note that all state and local programs have a harmless component. When a project is subject to a government arrangement with a state or local agency, income and rent limits cannot be harmed and property managers may need to lower the rent they charge tenants. Additionally, in the year of the snapback, MSAs could still face local rental caps.

A look back at Albuquerque’s deadliest year, 2021

Airman gets life in prison for death of Mennonite woman