California’s most hazardous railway crossing to be upgraded

SANTA FE SPRINGS, Calif. — Each day, the intersection of Rosecrans and Marquardt Avenues in Santa Fe Springs is a flurry of traffic. big rigs pickup trucks. cars People. trains All of them mix in a fast-moving blur where 112 trains and 45,000 vehicles cross daily, occasionally to deadly effect.

Between 2013 and 2021, the intersection has caused 31 collisions between vehicles and trains and six deaths, prompting the state to declare it the most hazardous railway crossing in California. But that is poised to change. On Thursday, Metro broke ground on a new grade separation project that is designed to prevent train traffic from coming into contact with other vehicles.

What You Need To Know

“Separating the train tracks from the cars and the pedestrians will not only make this intersection safe, it will fix what has been a traffic nightmare for years,” LA County Supervisor and Metro Board Member Janice Hahn said moments before donning a hard hat and throwing a ceremonial shovel full of dirt for the project. “People take their lives in their hands every time they come to this intersection.”

A combination of freight and commuter trains run through the rail crossing every seven minutes, blocking roadway traffic for 21 hours every week, she said. Besides Amtrak, Metrolink and BNSF Railway, the track is also slated to be part of the California High Speed ​​Rail project.

When it is completed in two years, trains will no longer cross through the intersection along the same stretch of asphalt as other vehicles. Cars and trucks will pass over the tracks on a new bridge that allows the trains to pass under them. 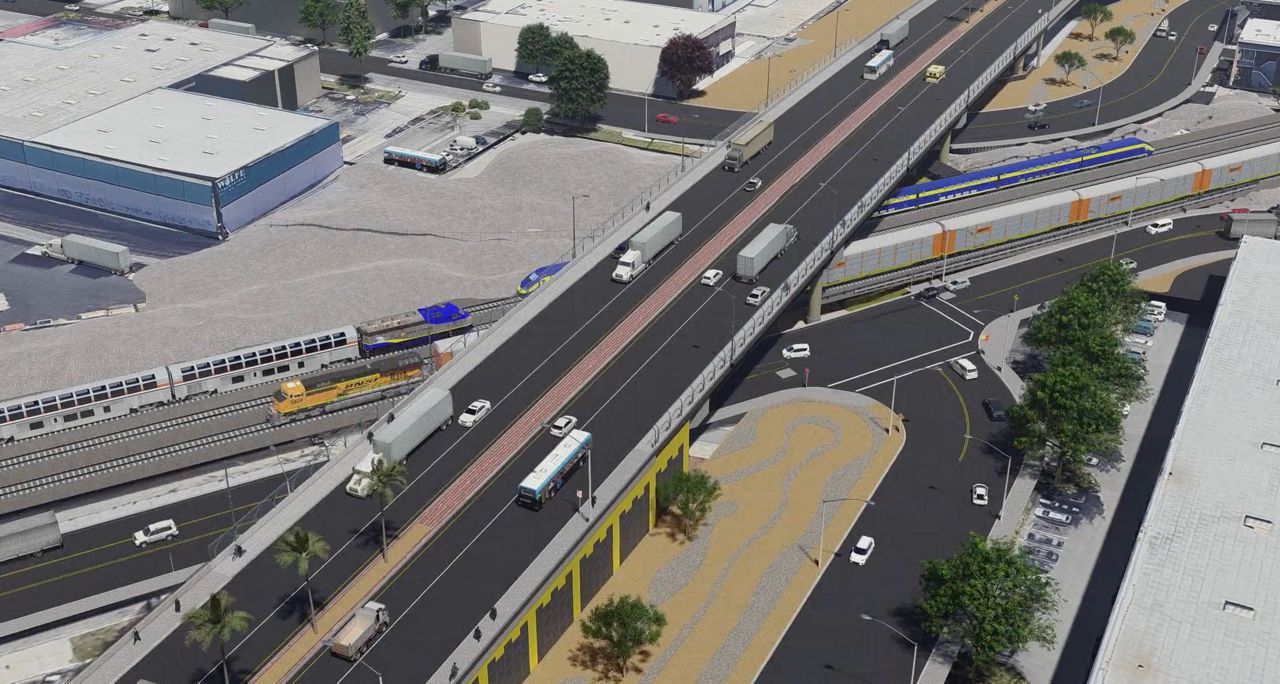 Multiple agencies from different levels of government are helping fund the $156 million Rosecrans/Marquardt Grade Separation Project. The Federal Rail Administration provided $15 million, and LA County residents ponied up $26.5 million through Measure R, the 2008 ballot measure voters passed to increase the local sales tax by half a cent to pay for transportation projects and improvements.

The California High Speed ​​Rail Authority contributed $77 million. The authority’s Southern California Regional Director, LaDonna DiCamillo, said the project has multiple benefits beyond the safety improvement. It will decrease congestion, reduce greenhouse gas emissions and reduce noise. Once the project is complete, trains will no longer need to blow their horns as they approach the intersection to alert pedestrians and other vehicles that they are approaching.

Metro Chief Executive Stephanie Wiggins was the head of Metrolink in 2019 when a train carrying 200 people hit an RV at the Rosecrans/Marquardt rail crossing and she went to the scene of the crash.

“There’s nothing like seeing up close and personal the damage that can take place. Today’s milestone is really indicative of what public agencies can do to help save lives,” Wiggins said of the collaboration between Metro, the Federal Railroad Administration, the California High Speed ​​Rail Authority and government leaders in Santa Fe Springs. “You’re really showing how we can be a model partnership together to deliver infrastructure.”

So You’re Looking For a Breakfast Burrito [Vol. 6] |