Grief Over Slaying of Girl Spreads Far Beyond Navajo Nation

She was a budding musician and talented artist, a girl whose death at the hands of a man who authorities say lured her into his van spread grief far beyond her home on the Navajo Nation.

More than 3,000 people turned out for Ashlynne Mike’s funeral in Farmington, New Mexico, weeping as images of the 11-year-old girl were displayed overhead and the sounds of her xylophone rang out in the auditorium. A headstone created for her grave read “our little angel in heaven.”

The Friday crowd far outnumbered the community of Lower Fruitland, where Ashlynne was raised with her father and siblings. Entire families, hugging each other and their children, sat before their small white coffin. Many wore yellow T-shirts. Navajo Nation Council Speaker LoRenzo Bates said yellow represents hope, strength and resilience, and it was one of her favorite colors.

New Mexico Gov. Susana Martinez called on the mourners to carry on the kindness Ashlynne showed the world.

Regina Mike, right, decorated the windshield of her motorcycle in honor of her relative, 11-year-old Ashlynne Mike, as she and hundreds of other motorcyclists escorted the girl’s casket following a memorial service in Farmington, NM, May 6, 2016.

“I cannot imagine the pain Ashlynne’s loved ones feel right now,” the governor said. “But even as we mourn her, we should celebrate her life and remember what a beautiful little girl she was, inside and out.”

More than 200 miles away in Albuquerque, suspect Tom Begaye Jr. waived his right to a preliminary and detention hearing, and a judge ordered him to remain in custody on charges of murder and kidnapping. Public defender James Loonam was assigned to represent him and did not immediately respond to requests for comment.

Begaye, a 27-year-old Navajo who lived down the highway from Ashlynne’s home, persuaded her and her 9-year-old brother, who had been playing near their bus stop after school, to climb into his van, to an FBI agent’s affidavit says. The boy told the police that the man took them deep into the desert and then walked off with his sister before returning alone.

Begaye told investigators he sexually assaulted the girl and struck her twice in the head with a crowbar, and that she was still moving when he left her, according to the affidavit.

Begaye has been cited multiple times by Navajo police since 2006 on suspicion of public intoxication, speeding, theft, disorderly conduct and not having a valid driver’s license, tribal records say. Off the reservation, he had been cited for drug possession about three weeks ago. 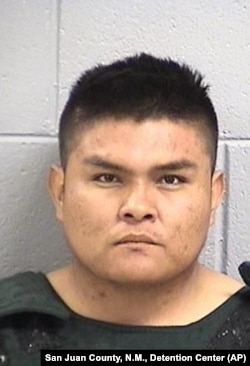 Tom Begaye of Waterflow, NM, was arrested in connection with the disappearance and death of 11-year-old Ashlynne Mike. The FBI said Mike was abducted after school on May 2 and her body was found the next day.

The slaying has raised tough questions for residents and law enforcement on the country’s largest American Indian reservation, which stretches for 27,000 square miles into New Mexico, Utah and Arizona.

Eight hours passed between the family’s initial missing-persons report and an Amber Alert that went out at 2:27 am Tuesday, urging people around the region to be on the lookout.

Her body was found later that morning, south of Shiprock Pinnacle, just inside the border of the Navajo Nation in the northwest corner of New Mexico.

One of Ashlynne’s brothers, Ryan Begay, told the audience at her funeral that he drove around the monolith for hours in the darkness, looking for his sister. He said he asked for an alert at 10:30 pm and grew more upset with each passing hour.

“I really wish that this alert went out a lot sooner,” he said, prompting strenuous applause.

Ashlynne’s younger brother told the police that he tried to find his sister after the man left him in the desert. Then he ran for help and was spotted by a couple, Ella and Benny Yazzie, who were driving and took him to the police. The boy was so distressed that he couldn’t describe what happened with enough detail to focus the search, authorities said.

Navajo families extend far beyond bloodlines, through traditional clan systems that foster kinship among tribal members, and the law enforcement delays didn’t prevent about a hundred community members from searching for Ashlynne, driving across the open desert long into the night.

On Friday, his father embraced the boy as the governor praised his bravery and said Ashlynne would have been proud.

Later in the service, images from across the country of people releasing balloons, holding vigils and singing in remembrance of Ashlynne flashed on the overhead screen. 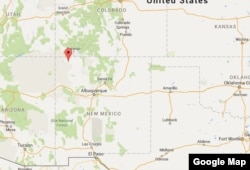 Rick Nez, president of the Navajo Nation’s San Juan Chapter, urged people to make sure their families know how much they care about them.

“Don’t ever forget to go to bed and rise in the morning and say, ‘I love you, my precious child,’ ” Nez said.

Later Friday, Ashlynne’s classmates got the honor of leading hundreds of other children in a milelong race. Then, 500 yellow balloons were released in her memory.

Race organizers also planned to go ahead with Saturday’s Shiprock Marathon. The course, along Navajo Route 13, runs about 3 miles from where Ashlynne’s body was found.

A Christian prayer team and a traditional practitioner blessed the entire route “to bring some peace and healing to the place and to the runners who will be out there,” race director Tom Riggenbach said.

“It’s hard to know what emotions will be there,” Riggenbach said. “I’m sure it will be very pure and raw emotions, but I think the one thing a lot of the kids will understand is that sometimes life is not always easy, it’s not always happy, it’s not always fair by our standards. But people pull together and can overcome it.”

Uravan Announces the Purchase of Uranium Claims in Lisbon Valley