TUBA CITY – It’s a familiar sight to anyone who knows the Navajo Nation: red sandstone, yellow-tinged sagebrush, a blue sky canopy that meets a protective ring of mountain peaks, with sheep and cattle dotting the fields.

A newer addition to the timeless landscape is a series of hand-lettered turquoise signs along southbound U.S. 89 near Tuba City. “Native people are resilient, resourceful, kind, and most of all hopeful,” one says.

The messaging reflects how far the Navajo Nation has come in battling and recovering from COVID-19, and how it remains vigilant against a disease that has taken the lives of 1,557 people on the Navajo Nation.

In mid-2020, the Navajo Nation had the highest per-capita infection rate of COVID-19 in the U.S. Although the infection rate remains high, tribal leaders continue to practice mitigation efforts while many parts of the U.S. have relaxed restrictions.

Reflecting on the pandemic

Residents of Tuba City, nearly 80 miles north of Flagstaff and one of the largest towns on the Navajo Nation, reflected on the past 21 months of dealing with the pandemic and experiencing loss and hardship while gaining a greater understanding of what “community” means.

“It was a big scare at that time,” Valentina Nez of Tonalea said as she waited in her car to receive a booster shot at the Tuba City Regional Health Care mobile medical unit. “You don’t know who has COVID, and you want to protect yourself, so you think about your family as well as your co-workers.”

Nez, who has received two doses of the Moderna vaccine, was afraid of coming into contact with people who may have been infected, some of whom seemed to have little concern for their safety.

Shaydreanna Jackson waits to receive a booster shot at the Tuba City Regional Health Care mobile medical unit. Her son, Koah, was getting the Pfizer vaccine for ages 5 to 11. (Photo by Sierra Alvarez / Cronkite News)

“It was definitely heartbreaking, knowing that there were a lot of people losing their lives to this virus, something we don’t know anything about,” she said, describing the effects it had to her social life and noting that she had removed herself from social media because it was damaging her mental health.

Shaydreanna Jackson said her brother died in July, although not from COVID-19. But the pandemic still affected her family.

Jackson was waiting to receive a booster shot and was accompanied by her son, Koah, who received the Pfizer vaccine for ages 5 to 11. He said it wasn’t so bad, even though he’s normally afraid of needles.

Although Jackson lives in Tuba City, she is Hualapai, who, along with the Havasupai people, live in and near the Grand Canyon, about 50 miles northeast of Kingman.

“We’re already small as is, and we’ve had a lot of cases out there and it’s taken quite a bit of our elders,” Jackson said. “That’s scary because our language already isn’t spoken.”

The Hualapai Tribe has had 206 positive cases overall, with a population of 1,621, according to data from the tribe’s COVID-19 tracker. 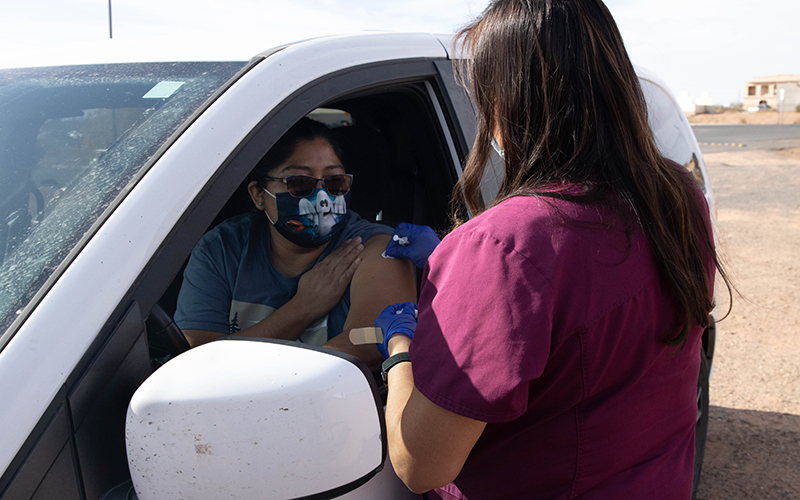 “It was a big scare at that time,” Valentina Nez of Tonalea says, referring to the early days of the pandemic. She received a booster shot at the Tuba City Regional Health Care mobile medical unit. (Photo by Sierra Alvarez / Cronkite News)

An incident command structure tent at the Tuba City Fairgrounds on the eastern end of town was erected to act as a potential overflow triage area for Tuba City Regional Health Care Corp., according to Joe Baca, health care social worker and counselor for the hospital, but it’s now used as a staging area for distribution of groceries and other necessities.

Baca recalled the tent was an eyesore, with bright floodlights, imposing size and the steady churn of helicopters arriving and leaving. It initially stirred feelings of worry and fear among tribal members.

What was initially an ominous sight became a hub for distributing supplies for those who were unable to leave their homes for groceries, water and firewood, which is used extensively on the remote reservation.

Before the vaccines became available, Baca was afraid he wouldn’t survive an infection. He feared for his and his family’s safety and well-being.

His fiance, Britney; sister-in-law, Michelle; and his sons, Benicio and DeAndre, were able to remain home and attend school remotely, but Baca – who was heavily involved in community outreach and supply distribution – kept working.

“Early on in the distribution, it was so dire,” he said. “I was so afraid we were going to run into somebody in their home setting, their hogan or their housing structure, and they were going to be gone. That was my worst fear: ‘Maybe nobody got to them, nobody helped them, they got sick or they didn’t have wood or basic food.’ I’m glad to say we never ran into anything like that.” 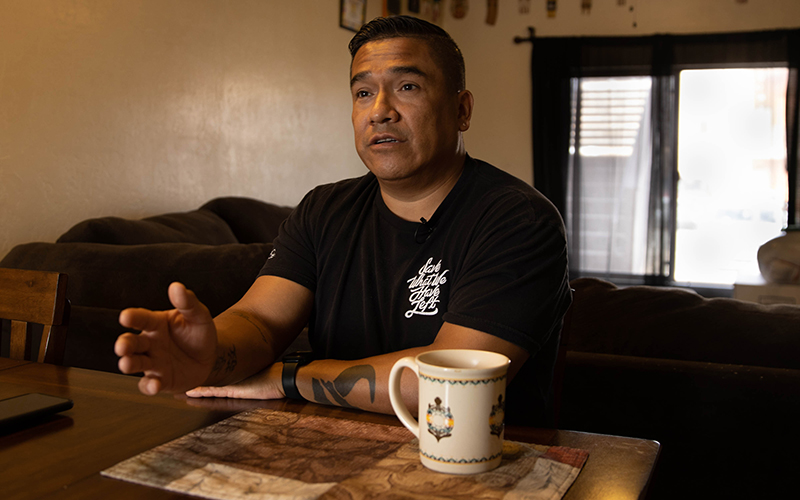 “This is what we had been waiting for, it was a sign of hope, that dim light at the end of the tunnel,” Joe Baca, a social worker for Tuba City Regional Health Care, says of COVID-19 vaccines. (Photo by Sierra Alvarez / Cronkite News)

Tuba City Regional Health Care’s RV-size mobile medical clinic is parked on a small, vacant lot on the border of the Navajo Nation and the Hopi Tribe it surrounds. It provides COVID-19 vaccines, Pfizer and Moderna boosters to adults and now shots for children as young as 5.

The clinic, which began operations in mid-2013 and services the communities around Tuba City, primarily provides such medical services as physicals, non-COVID-19 vaccines, some lab testing and pharmacy medications, and even physical exams for commercial drivers license candidates. Since regular health care operations at the hospital resumed in July, the clinic on average sees about 20 patients a day. 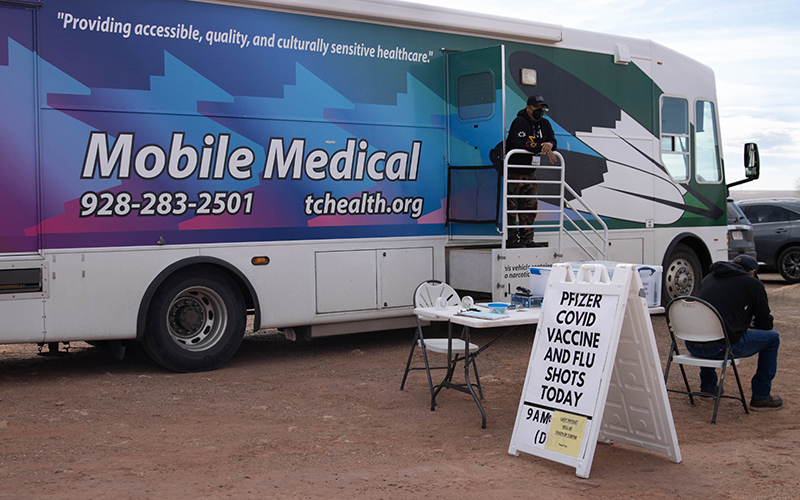 Shortly after the arrival of COVID-19 vaccines late last year, Tuba City Regional Health Care, along with other Indian Health Services hospitals across the Navajo Nation, conducted mass vaccine blitzes where hundreds of people, including entire families, were vaccinated.

Advertisements and social media played a critical role in informing the Navajo Nation about vaccination events.

Across the Navajo Nation, such additional measures as curfews and lockdowns, mask mandates, limits on occupancy in businesses and physical distancing were enforced to limit potential spread of the coronavirus. Except for curfews and lockdowns, most of those measures remain in effect and are adjusted according to the number of positive cases, as outlined in the Navajo Reopening plan. 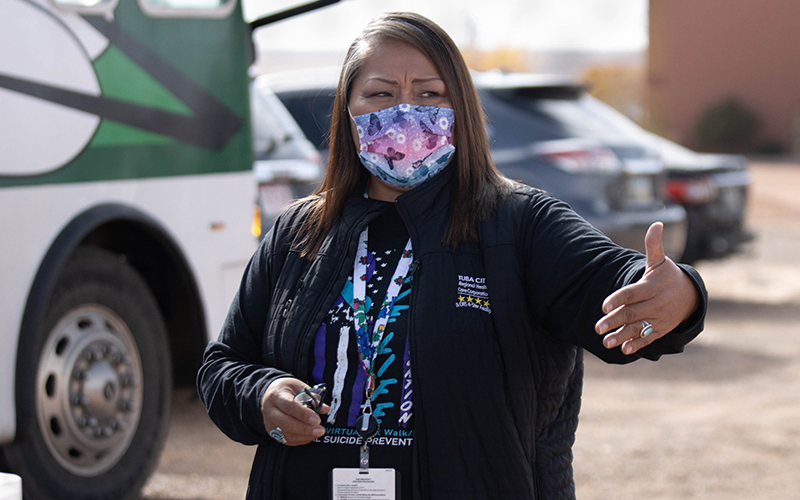 The continuance of such measures is a stark contrast to the rest of Arizona’s mitigation efforts, which have largely reverted to pre-pandemic conditions.

These efforts were possible because the Navajo Nation is sovereign. Although the tribe receives health care through the federal Indian Health Services, health care agencies on the reservation can contract with IHS or be wholly responsible for their own care under the Indian Self-Determination Education Assistance Act.

Tuba City Health Care, Tséhootsooí Medical Center and several others are “638 facilities” that have full control of their operations and health care.

The Navajo Nation has adhered to and followed the recommended guidelines suggested by the CDC and Food and Drug Administration as it pertains to COVID-19 and its mitigation and vaccine rollouts throughout the pandemic.

Nez, Jackson and Baca still display the optimism that got them through the past year and a half – despite the challenges and losses that nearly every Navajo experienced.

Baca’s involvement with supply distribution and other community outreach efforts changed his perception of those who were infected. Once he saw their faces and heard their voices, his concern for them outweighed his fear of exposure to the coronavirus that causes COVID-19.

“It was easy to transition into being more empathetic toward them,” Baca said. “We gave them a little bit of company – especially the elders, they missed that. The ones who were sick, too, I could see why they felt alienated and whatnot.” 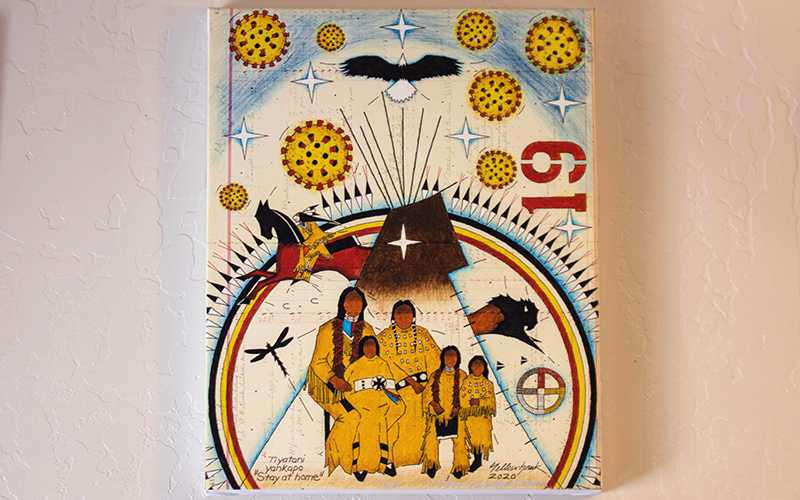 Baca’s mother gave him this painting, which is meant to symbolize the strength of family and their resilience during the pandemic. The medicine wheel is what offers protection, the teepee represents home and protection, Baca says, and they’re working together to stave off the coronavirus. (Photo by Sierra Alvarez / Cronkite News)

Nez encouraged others to get vaccinated and get informed if they’re unsure.

“If there’s a way we can make an impact with getting our vaccine, and that it’s free, then why not?” Nez said. “We have so many elders and young children. It’s a good thing. We’re going to learn more about it, and the studies and statistics are going to show whether it’s making an impact or not, and, if it’s not, I’m sure they’re going to fix it.”

Two of Jackson’s sisters are nurses, and through their experiences she saw the importance of being vaccinated.

“I can keep my family safe, because of COVID we’ve not been able to gather, as well as keeping my grandma safe,” Jackson said. “(We’re) making sure she’s taken care of and that we don’t spread it to her because grandparents are very important in Native culture.”

The turquoise signs on U.S. 89 serve as a reminder of Indigenous sovereignty, strength and resilience but most importantly, hope. Hope that arrived in the form of vaccines.

“This is what we had been waiting for, it was a sign of hope, that dim light at the end of the tunnel,” Baca said, adding that the pandemic “helped us grow in another way, we’ve become more self-aware, we have a different meaning of what family really is now.”