New Mexico farmers along a central stretch of the Rio Grande say two years of irrigation restrictions imposed amid severe drought threaten their farms, many of which have been around for generations.

In late August, the Middle Rio Grande Conservancy District imposed a ban on surface-water irrigation. It went into effect about a week ago. Since the ban was announced, farmers between Cochiti Pueblo and San Antonio, N.M., have scrambled to adapt and survive until next season.

One farmer told Source New Mexico that she took on debt last year for the first time since her parents bought the farm 60 years ago. Another is considering moving from growing green chile to marijuana. A third gave up on his winter crop entirely. And a fourth said he had no choice but to shoulder the cost, time and labor of irrigating his fields with well water, a decision that could further diminish the groundwater supply.

The MRGCD’s Board of Directors on Aug. 20 voted 4 to 2, and one director was absent, to shut off diversions for farm irrigation on Oct. 1, a month earlier than normal. The vote capped off a three-and-a-half hour meeting that drew emotional pleas from farmers.

Glen Duggins, the only full-time farmer on the board, was one of the directors who voted “no.”

This is the second time irrigation has been shut off on Oct. 1 in two years and comes after the board ordered the irrigation season to begin a month later than normal this year, on April 1 instead of March 1.

Chuck DuMars, chief lawyer for the MRGCD, told the board that New Mexico needs to send as much water as possible to Texas as part of the Rio Grande Compact, the 1938 tri-state agreement that governs the amount of water shared between Colorado, New Mexico and Texas.

New Mexico owed about 96,000 acre feet — about 31 billion gallons — of water to Texas as part of the compact as of late August. If that debt were to get to 200,000 acre feet, New Mexico would violate the compact, potentially hamstringing the state’s ability to use any of the water in its reservoirs.

The decision to prohibit irrigation occurs as a water dispute between Texas and New Mexico makes its way to the Supreme Court. Texas filed suit against New Mexico in 2013, alleging New Mexico is violating its part of the compact by allowing groundwater irrigation south of Elephant Butte reservoir, and, in doing, so reducing the amount of water owed to Texas.

The three states also agreed last year to let New Mexico empty about 38,000 acre feet of water from El Vado reservoir for irrigation, even though that water was owed to Texas under the compact. That was a “huge sacrifice” by Texas officials during a desperate water shortage here, MRGCD’s water operations manager told the board in September 2020, one that he didn’t think the state could ask for again.

So, over the objections of about two dozen farmers who attended virtually or in-person, the MRGCD voted to send the irrigation water that would have been used on farmers’ fields this month to Texas. Choosing to allow irrigation to continue would have looked bad as the court case plays out, DuMars told the board.

“It would not be a good optics if we had gone forward and continued to increase the debt, basically divert water at a time we’re in a debit and make the debit worse,” DuMars told the board. (“Debit” refers to New Mexico owing water to Texas).

The board’s decision had ripple effects through the Middle Rio Grande region, which serves about 11,000 irrigators, according to the district.

Below is how four farmers are reacting to the restrictions:

The shortened irrigation season last year meant Janet Jarratt was unable to grow enough alfalfa to feed her goats and cattle, so she had to borrow money to pay for it.

“Going into debt for the first time since my folks paid this place off, it’s embarrassing and shameful,” she said, as goats nipped at her shoelaces. “… They were children of the Depression, and they taught us all to hate debt. So to owe money now is terrible. It’s emotionally a really bad feeling to change that dynamic so drastically. I just didn’t know what else to do.”

Jarratt is a former MRGCD board chair and has long been advocating for farmers’ water rights in the district, especially at farms like hers that have water rights more than a century old. She sued the MRGCD in 2013 over the issue, saying the New Mexico Constitution requires the MRGCD to ensure that the oldest water rights are honored first. But she lost.

She said the shorter irrigation season was poorly timed. It requires many farmers to plant later, which reduces yields and puts crops at risk due to heat, bugs or weeds.

For example, oats planted in April instead of March don’t grow tall enough to produce much harvest, she said. Alfalfa planted in the spring often gets tangled with weeds that siphon water and make harvesting difficult. It’s much better to plant them in the fall to avoid that problem, she said.

If there were more farmers on the board, she said, the season might have been shifted earlier or later, rather than cut at the beginning and the end.

She also said the MRGCD is too quick to limit water for irrigation, often making farmers the victims of the requirements of the compact when there are many other big water users, like cities and towns upstream.

“There was another 10,000 acre feet they could have delivered to us, but they caught it off Oct. 1, and they’re sending in the water downstream for the compact,” she said. “So we’re bearing the sole responsibility for the compact.”

In addition to buying feed, she spent tens of thousands of dollars resurrecting a 50-year-old well on her property to pump groundwater to irrigate what she could, she said. She suspects that many of her farmer neighbors are turning to wells to irrigate, which depletes a groundwater supply she said is a one-time resource.

Jarratt said she expects many of her neighbors will close their farms if restrictions like this year’s persist. It’s a tempting prospect, she said, especially with the pressure some farmers face to sell their land to developers.

She’s turned down several inquiries from out-of-state developers who want to turn her property into a solar farm or a housing development, she said.

“I know a lot of guys in just the last two years that have left. They sold all their equipment. They’re done. They’re gone,” she said. “They’re going anywhere that’s friendlier to farmers than here. And so people that want to have local food, you can’t have local food if you don’t support local farmers. And that means with water.” 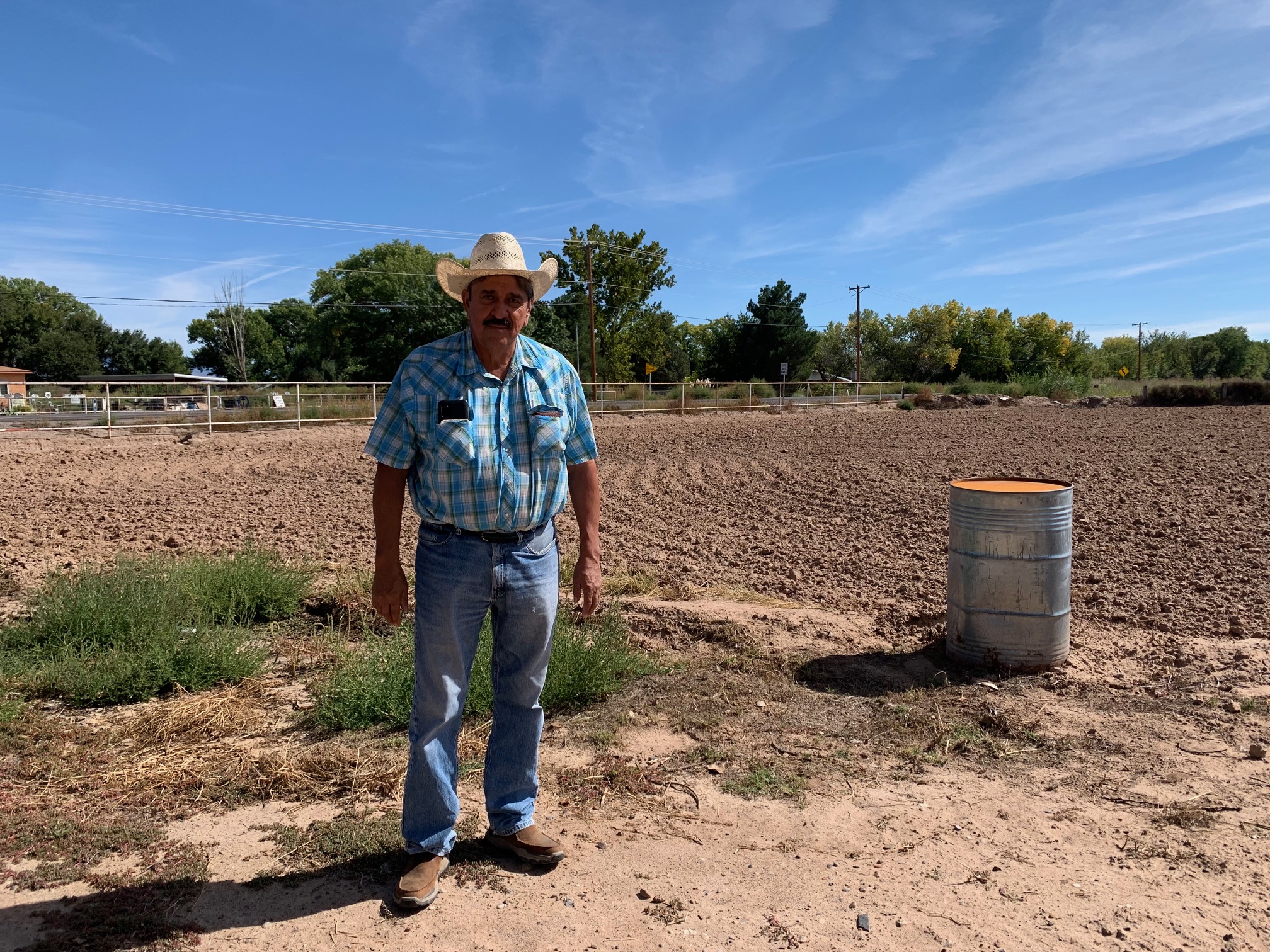 Eugenio Padilla and Alfred Gabaldon both have farmed on either side of the Rio Grande near Belen for decades.

Padilla has a well, but it’s been contaminated with fuel from the nearby railroad, he said. Gabaldon doesn’t have a well.

So the MRGCD decision in August meant both of their ditches ran dry in the last week. They both have been taking severe measures to keep their operations going since last year. Both aren’t sure how much longer they can keep them going if the drought continues and the restrictions are similar to the last two years.

Padilla, who grows green chile and alfalfa, grew only alfalfa this year, which is a much less valuable crop. He won’t be able to plant a fall alfalfa crop, he said. 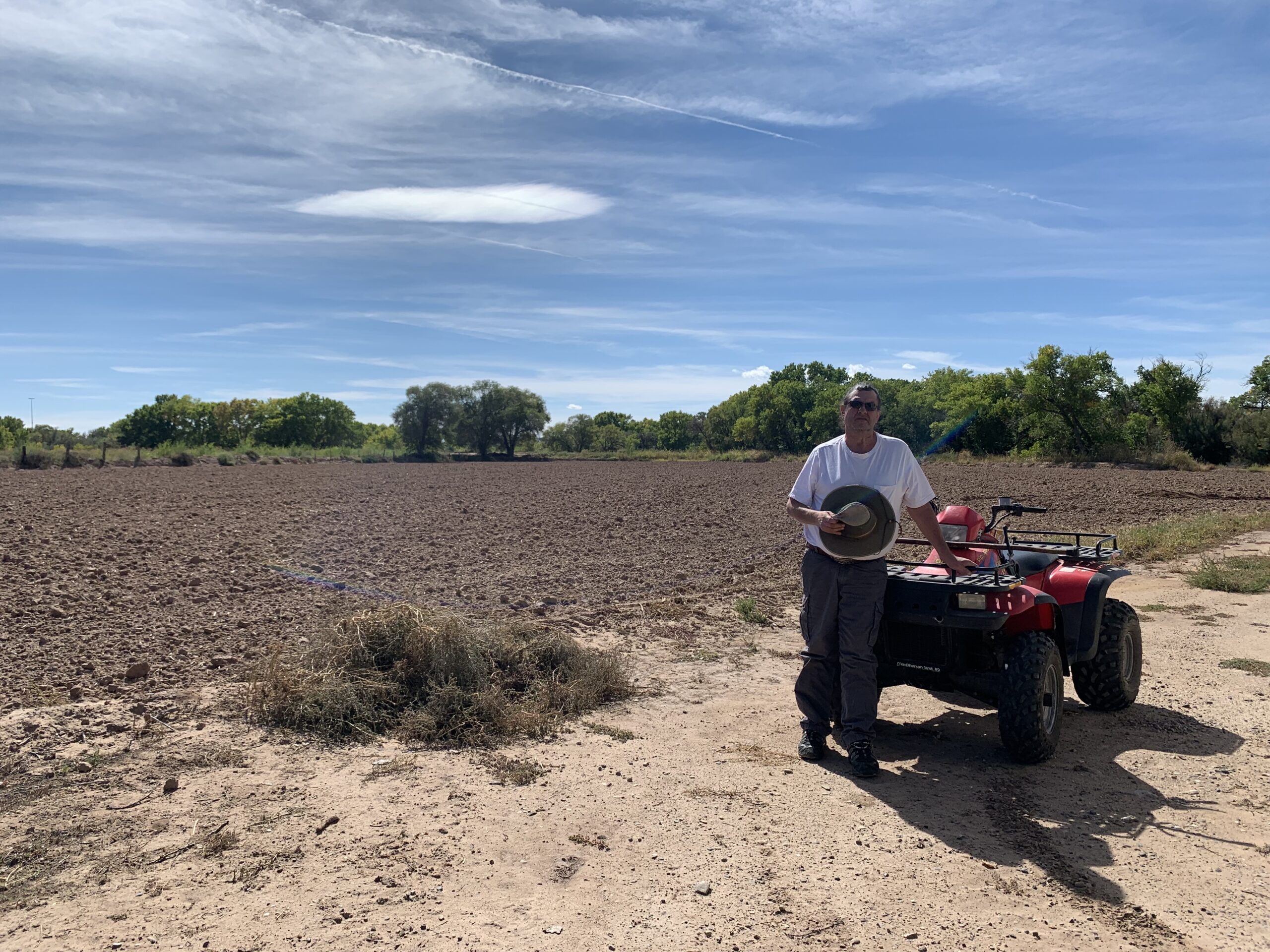 “We may have to change our concept of farming,” Padilla said. “We might have to change into like a greenhouse business. It would have to be more profitable, like the marijuana deal.”

Selling marijuana, now that it’s legal in New Mexico would mean he’d need less acreage — and therefore less water — to earn a profit. But it would mean he’d stop growing green chile, which is his passion.

Gabaldon has 60 acres on which he plants alfalfa, winter wheat and other crops. He used to have about 200 acres but downsized due to cost and labor issues. After the restrictions, he said he knows of no farmer that did any alfalfa planting in the fall.

The seeds are too expensive, and you can’t take the chance. We’re not sure if we’re gonna have a wet winter or not. So you’re taking one hell of a risk.

Also, in a typical season he can irrigate enough to get five or six alfalfa cuts, he said. This year, he and most farmers he knows can only irrigate for four. That costs him thousands of dollars he doesn’t have, he said.

Travis Harris has about 270 acres just north of Bosque del Apache Wildlife Refuge on which he grows alfalfa, wheat and Sudan grass.

He’s a third-generation farmer. His son will follow in his footsteps, he said, and he hopes his grandkids will too.

Fear of being unable to provide for them made him speak up at the Aug. 20 meeting when he asked the MRGCD to find anr alternative to the irrigation ban.

“This is how I raise my money to pay my debts to provide for my family. Excuse me. It’s very hard,” he said, moved to tears. “Listening to the forecasts … that doesn’t look good for any of us.”

Because of the irrigation ban, he, like Jarratt, has relied heavily on his well. The water quality is worse than what comes through the ditches, he said, and he doesn’t know how long the pump motor will last.

Running the well 24 hours a day eats up fuel and takes longer to pump, he said, which cut into profits.

He had no choice but to continue growing, he said. He couldn’t afford not to. He’s still paying off a baler and has additional maintenance and operating costs. He has to put food on the table, he said.

He said he’s not sure what will happen if he has to keep adapting to irrigation restrictions and drought. Forecasts call for a dry winter, but Harris, a man of faith, said he’s praying they’re wrong.

“I believe that God’s gonna provide for us,” he said, “and so I’m hoping this winter — even though the so-called experts are calling for a dry, hot winter — for a lot of snowpack up north so we have water in the river to irrigate.” 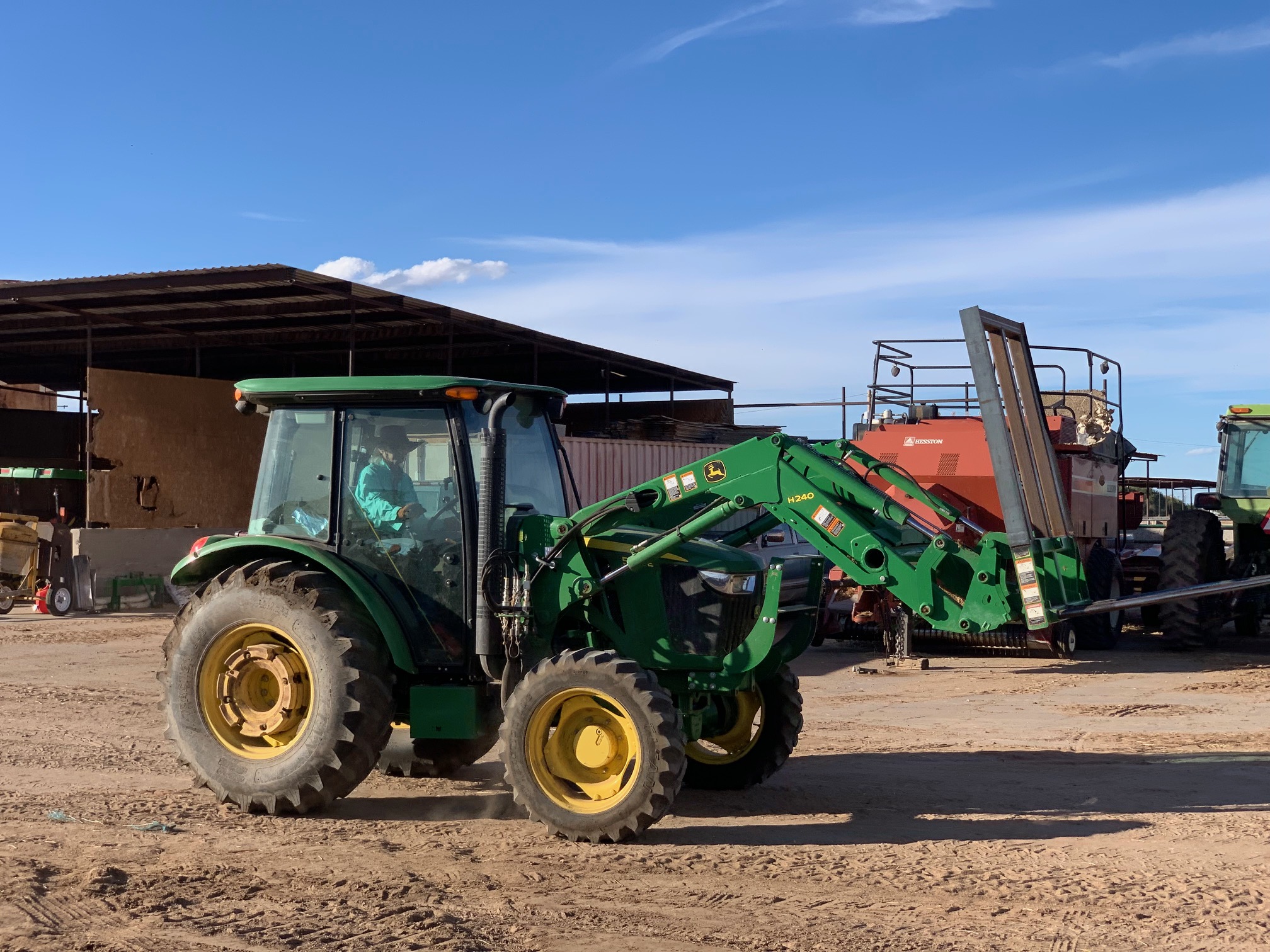