Storytellers can be born at any age, and great yarn has no expiration date. These points are evidenced by Paul D. Olsen of Rancho Santa Fe, a retired telecommunications executive who could relax but instead spent the last three years researching and writing a compelling new book, Phone Warriors: Exposing the Telecom Wars of the 1970s “.

After its publication in July, the book achieved top seller status in three Amazon categories and received many rave reviews. Olsen says he was surprised at how long it took to get the book from an idea to the printed page. But with the support of his wife Susie and a desire to shed light on the dark and lewd history of the telecommunications industry and AT&T, he did it. Now with the book’s publication at the age of 82, he can claim his place as one of Rancho Santa Fe’s oldest successful debut authors.

The book is an insight into the processes of an industry that is nowadays perceived by many to be smooth and problem-free. But before there was a multitude of cellular carriers and device manufacturers to choose from, there was a powerful communications giant to rule the country. “Ma Bell,” as AT&T was called, was the sole owner of telephone systems in the United States. Since it was founded in 1885, it has run its business free of competition. That changed in 1982 when the government saw the company as a monopoly and ordered its dissolution. The details are publicly known, but what is not so well known is the subject of Olsen’s book. Behind the scenes, AT & T’s operating companies were a hot bed of bribes, backroom deals, and illegal activity, while some newbies and consultants were engaged in sex and kickbacks to win contracts. 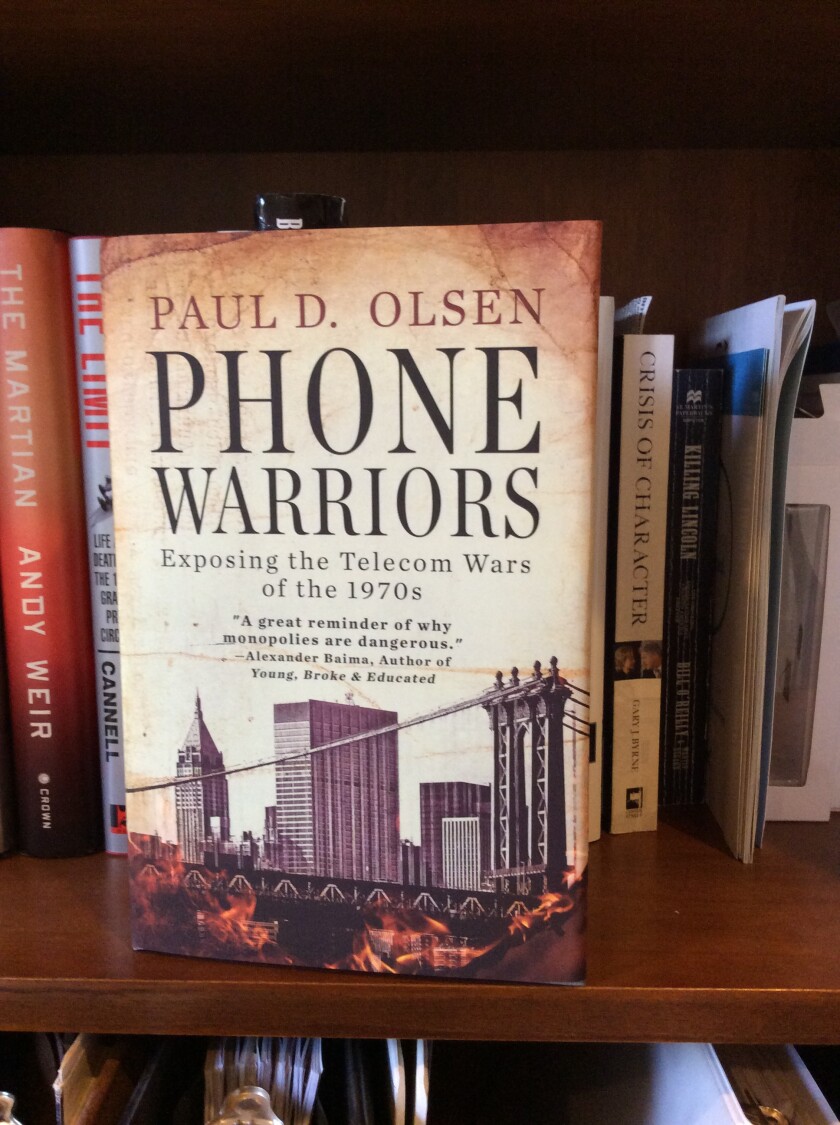 The cover of “Phone Warriors: Exposing the Telecom Wars of the 1970s”.

“Make no mistake, Ma Bell was a mean mother – a BEAST,” claims Olsen in the preface. Divided into seven mini-books and 36 chapters, Phone Warriors offers an in-depth look at the industry, but also an in-depth look at secret areas of business that most of us don’t know about.

“Few are aware of the unscrupulous and illegal activities of AT&T that led to their sale and why the US Department of Justice was prosecuting them,” said Olsen. It’s a story with all the intrigue, surprises, and secrets found in every modern high-tech drama. Young readers will be surprised to learn that what has happened in the telecommunications past rivals any current controversy on Facebook or Twitter. The book is full of specific details and shocking moments, told by those who were there.

“Get us girls and get us money.” These words were uttered by Abe Stein, director of communications for San Diego County, when he applied for a telephone contract. In other words, if a company that offers a stand-alone telephone system were unwilling to compromise ethical business practices, it could be excluded from doing business. Olsen cites this incident as one of many illustrating the rampant corruption at the start of the industry.

“Although I was in business and knew about the San Diego County Treaty, I was unaware of the extent of blackmail, sex, and drugs,” said Olsen. Prior to liquidation, AT&T and its Bell Operating Companies were prepared to stifle potential competition by almost any means necessary. “They entertained politicians and talented government officials to encourage approval of tariff increases … They also tried to get customers to break contracts, threatened to stop doing business with customers who wanted to change their Bell system, got involved in Sabotage, promised lower prices without regulatory approval and used delaying tactics, ”he said. “Once the competition was allowed, unscrupulous consultants quickly found that they could bribe private systems providers. The corruption worked both ways, with some companies offering bribes or kickbacks to a client or consultant. “

Olsen certainly had a front row seat for the drama. He was a vice president of Arcata Communications, the first national company to compete with AT&T, and was a director of the North American Telephone Association. Over his decades in the industry, he learned firsthand that AT & T’s willingness to destroy competitors by legal or illegal means came straight from the chairman and through the ranks. While researching for the book, he met again with colleagues in the industry who shared their harrowing and personal anecdotes. A few people hesitated to speak to him on the file, and some were no longer alive, but Olsen found many willing and willing to speak. Most were eager to reveal the real history of the telecommunications industry rather than the whitewashed business details that exist in many other books.

One reviewer wrote that Phone Warriors “reminded me that AT&T and Pacific Bell rarely played fair. The book shows that those who fought AT&T had one more problem “besides pioneering a new industry.” In other words, when wired communications migrated to a wireless world, companies had to innovate, not just also wage war against the existing power AT&T. It was difficult enough to get a foothold in a rapidly changing industry, and that difficulty was compounded by the need to play the dirty game of AT&T or run the risk of failure. And in another similarity to today’s social upheavals, Olsen points out that at the time of this history, at the end of the 1960s and 1970s, the country was experiencing civil and economic unrest just as it is today. Olsen’s book shows how much the present resembles the past.

Olsen’s road to publication was not an easy one. It took a lot longer and was a lot harder than he expected. The writing process is easy, he said, compared to tracking down people and information from the past. That took time and effort, including paying the Securities and Exchange Commission to find and retrieve records from 50 years ago. Another surprise came from the release process itself. “I was really naive,” said Olsen. “I figured I’d write the book, call a publisher to get it printed and distributed, and sit back and collect my share of the royalties.” He laughs and admits that there are more people and companies involved in publishing than he ever imagined, and that the process was complicated and slow. He said he was satisfied with the final results, a 334-page book published by Acorn Publishing and available in hardcover, paperback, or electronically. He is particularly pleased about the cover artwork by Acorn, which, with its muted colors and the gaudy skyline of Manhattan, ties in with the noir thrillers of bygone times.

Phone Warriors has received positive reviews and recognition from both strangers and friends online. “Several neighbors came by with the book and asked me to sign it,” said Olsen. “A handful actually called it a great book – I wasn’t expecting it.” He admitted he’s not sure how many copies have sold, but acknowledged that any royalties will be a bonus. His real satisfaction comes from completing his book project, he said. Now that it’s done, Olsen and his wife Susie plan to continue enjoying their golden years. And he can add another bullet point to his long and successful career – bestselling author.