ALBUQUERQUE, New Mexico (AP) — When pulled over by New Mexico police, the suspect in the killings of four Muslim men in Albuquerque denied any connection to the crimes that shook the city and its small Muslim community — and told authorities he was so unnerved by the violence that he was driving to Houston to look for a new home, court documents said.

The documents made public Tuesday night in a criminal complaint said Muhammad Syed, 51, only had clothing, shoes and a handgun when he was arrested Monday during a traffic stop more than 100 miles (160 kilometers) from his home in Albuquerque.

Syed, an Afghan immigrant, told detectives he had been with the special forces in Afghanistan and fought against the Taliban. He also denied having any involvement in the murders. Syed was scheduled to appear in court Wednesday afternoon. Prosecutors planned to ask that he be held without bail pending trial and court documents did not list an attorney who could speak on his behalf.

The ambush killings of the four Muslim men sent fear rippling through the Muslim community of New Mexico’s largest city but generated a flood of information, including tips that led to the arrest of Syed, who knew the victims, authorities said.

Following the arrest, Albuquerque’s Muslim community breathed “an incredible sigh of relief,” said Ahmad Assed, president of the Islamic Center of New Mexico. “Lives have been turned upside down.”

The first killing last November was followed by three more between July 26 and August 5.

Albuquerque Police Chief Harold Medina said it was not clear yet whether the deaths should be classified as hate crimes or serial killings or both.

Syed had lived in the United States for about five years, the police said.

“The offender knew the victims to some extent, and an interpersonal conflict may have led to the shootings,” a police statement said, although investigators were still working to identify how they had crossed paths.

When asked specifically if Syed, a Sunni Muslim, was angry that his daughter married a Shiite Muslim, Deputy Police Commander Kyle Hartsock did not respond directly. He said “motives are still being explored fully to understand what they are.”

Assed acknowledged that “there was a marriage,” but he cautioned against coming to any conclusions about the motivation of Syed, who occasionally attended the center’s mosque. 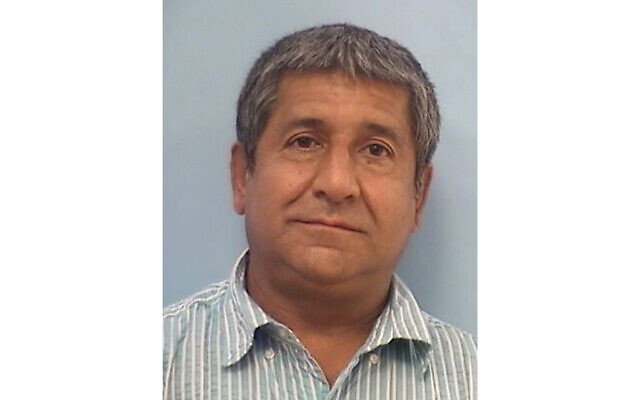 In 2017, a boyfriend of Syed’s daughter reported to police that Syed, his wife and one of their sons had pulled him out of a car, punching and kicking him before driving away, according to court documents. The boyfriend, who was found with a bloody nose, scratches and bruises, told the police that he was attacked because they did not want her in a relationship with him.

Syed also was arrested in May 2018 after a fight with his wife turned violent, court documents said.

Prosecutors said both cases were later dismissed after the victims declined to press charges.

The Albuquerque slayings drew the attention of President Joe Biden, who said such attacks “have no place in America.” They also sent a shudder through Muslim communities across the US Some people questioned their safety and limited their movements. 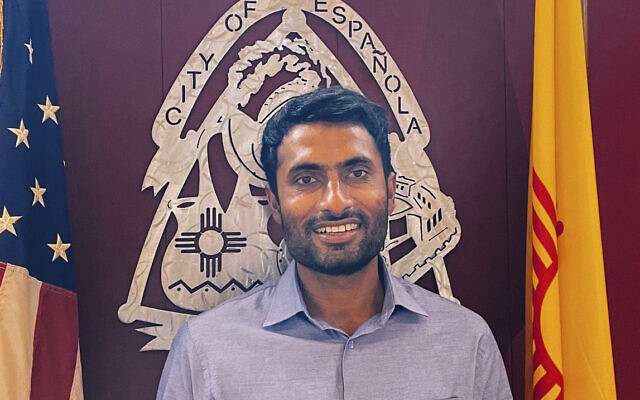 This undated photo released by the City of Española shows Muhammad Afzaal Hussain, 27, a planning and land use director who was killed in Albuquerque, New Mexico, on August 1, 2022. (City of Española via AP)

He called the killings “deranged behavior.”

The earliest case involves the November killing of Mohammad Ahmadi, 62, from Afghanistan.

Naeem Hussain, a 25-year-old man from Pakistan, was killed last Friday. His death came just days after those of Muhammad Afzaal Hussain, 27, and Aftab Hussein, 41, who were also from Pakistan and members of the same mosque.

Ehsan Chahalmi, the brother-in-law of Naeem Hussain, said he was “a generous, kind, giving, forgiving and loving soul that has been taken away from us forever.”

Investigators consider Syed to be the primary suspect in the deaths of Naeem Hussain and Ahmadi but have not yet filed charges in those cases.

The announcement that the shootings appeared to be linked produced more than 200 tips, including one from the Muslim community that police credited with leading them to the Syed family.

Police said they were about to search Syed’s Albuquerque home on Monday when they saw him drive away in a Volkswagen Jetta that investigators believe was used in at least one of the slayings. 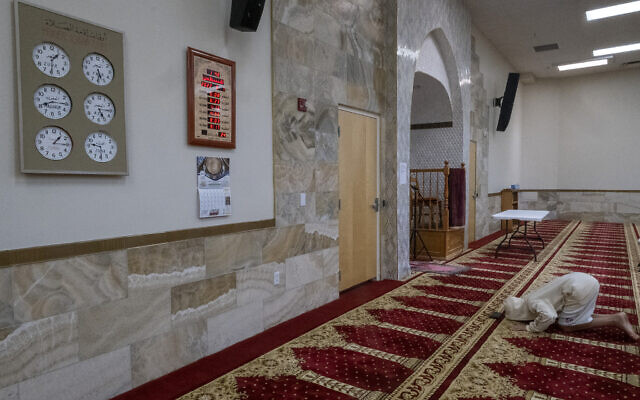 A young man bows during the Dhuhr afternoon prayer at the Islamic Center of New Mexico, August 7, 2022, after the fourth Muslim man was murdered in Albuquerque. (Adolphe Pierre-Louis/The via AP)

Syed’s sons were questioned and released, according to authorities.

We’re really pleased that you’ve read X Times of Israel articles in the past month.

That’s why we started the Times of Israel ten years ago – to provide discerning readers like you with must-read coverage of Israel and the Jewish world.

So now we have a request. Unlike other news outlets, we haven’t put up a paywall. But as the journalism we do is costly, we invite readers for whom The Times of Israel has become important to help support our work by joining The Times of Israel Community.

For as little as $6 a month you can help support our quality journalism while enjoying The Times of Israel AD FREEas well as accessing exclusive content available only to Times of Israel Community members.

Thank you,
David Horovitz, Founding Editor of The Times of Israel