SANTA FE, NM — The country’s most ambitious and prestigious summer opera festival, Santa Fe Opera, draws fans from around the country for a mix of new and familiar operas. It’s especially popular with the Dallas-Fort Worth opera crowd, particularly starting in early August, when all five productions can be seen on successive evenings.

The festival’s hilltop amphitheater, with its cable-stayed swooping roofs, is a dramatic presence itself. Open at the sides, it supplies cooling (and sometimes chilling) breezes — especially welcomed by baked Texans. Thunderstorms sometimes add to the drama. Some production sets open upstage onto views of the mountains and Los Alamos to the north.

Since its 1957 debut, Santa Fe Opera has been particularly committed to presenting new and lesser known operas. Its history includes 18 world premieres — including this summer’s M. Butterfly, by Huang Ruo and David Henry Hwang — and 45 American premieres.

Of this summer’s offerings, I opted for just Tristan and Isolde and Falstaff. Tim Diovanni wants to cover M. Butterfly, The Barber of Seville and Carmen.

This 33-year Santa Fe veteran was struck this time by the excellence of the orchestra, its players assembled from around the country. “Excellent” rarely applied in my earlier years, but this time, in both Tristan and Falstaff, the playing was vividly characterized and, after a Tristan opening that took a minute to focus, finely polished. (The principal horn was Kelly Cornell, associate principal of the Fort Worth Symphony.)

The chorus, drawn from the festival’s extensive apprenticeship program, has long been superb, and, prepared by Susanne Sheston, so it was again.

Santa Fe’s first-ever Tristan and Isolde supplies mostly thrilling singing. But in the July 27 performance, not even that, or conductor James Gaffigan’s insistence on urgency, could entirely redeem the longueurs of those ruminations on day and night, love and death. 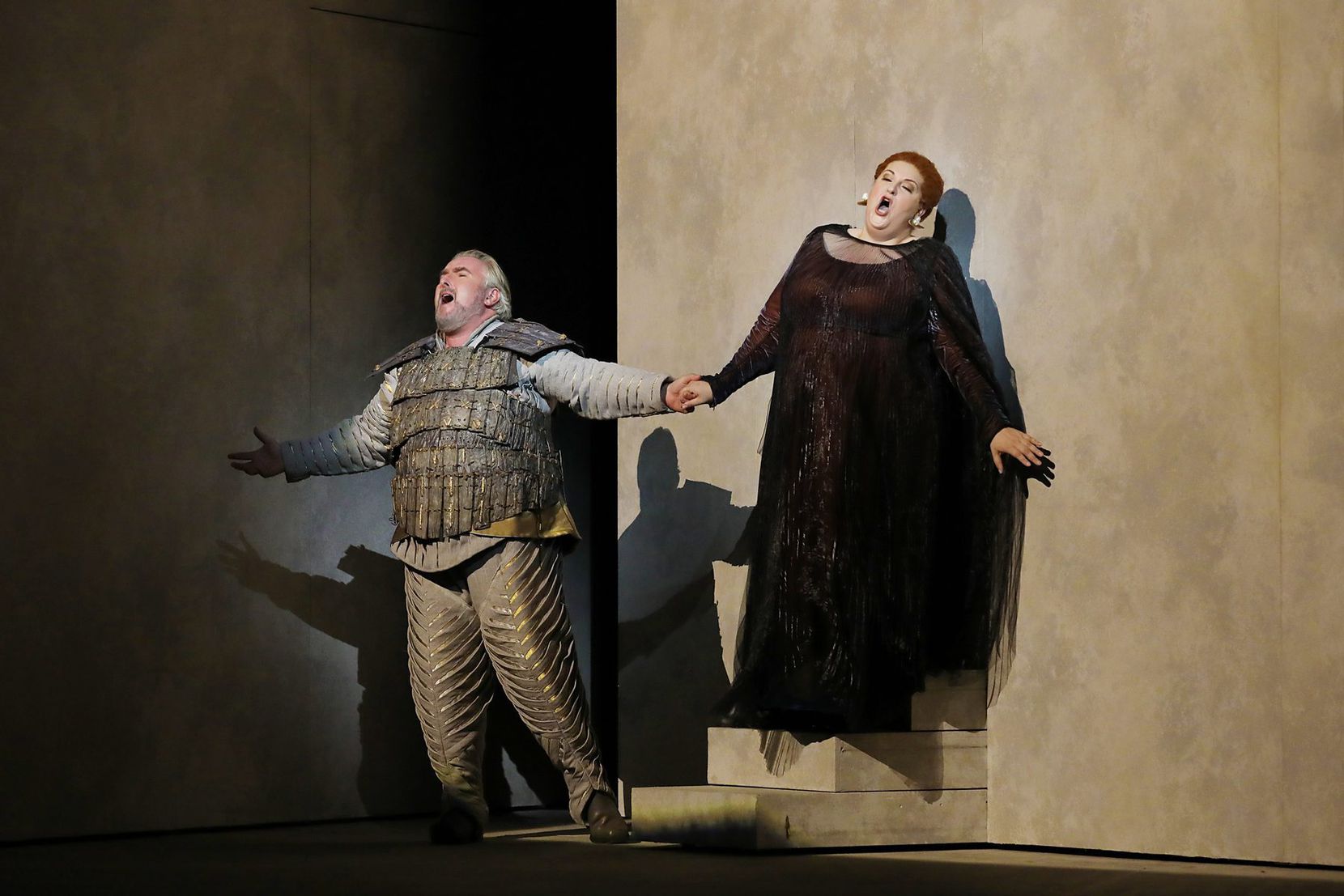 The Irish princess Isolde has every reason to hate the Cornish knight Tristan, who has killed her lover Melot and now is taking her back to Cornwall to be wedded to King Marke. In her fury, she orders a death potion for both herself and Tristan from her maid Brangäne.

But both Isolde and Tristan also perceive a certain mutual magnetism. Brangäne’s concoction turns out to be a love potion, causing the couple to fall passionately in love with each other — setting up serious problems when they reach Marke’s court.

Stabbed there by his longtime enemy, the courtier Melot, the grievously wounded Tristan lives on for a third act in his own castle. He’s in and out of consciousness and hallucination.

When Isolde comes to him, he dies in her arms. King brand, approved of the love potion, arrives to bless the couple’s love, but tragically too late. Tristan’s servant Kurwenal stabs Melot in revenge, but is himself killed by the king’s men. Isolde, transfixed by Tristan’s dead body, sings her passionate Liebestod and joins him in death.

Tamara Wilson, a stunning Turandot recently in Houston, is the Isolde of dreams. By turns petulant, furious and ardent, she supplies a powerful, well-integrated soprano, from blazing top notes to warm chest voice, and does so with the greatest expression.

But what, you ask, about Tristan? Well, Simon O’Neill, who sang Siegmund in the Dallas Symphony’s 2018 concert Walkure and a 2019 solo recital in the Dallas Opera series, delivers the decibels. But his tenor has a pinched, steely sound that soon wearies the ear. And Tristan has a lot to sing.

Unlike the many conductors who milk Wagner’s free-floating lines and yearning harmonies for all they’re worth, and then some, James Gaffigan kept the music both urgent and expressive July 27. The orchestra was a most responsive partner, with amazing offstage horns. Lacking reinforcing side walls, though, Wagner’s build-from-the-bottom orchestral sonorities lacked substance.

Verdi was 75, and largely retired, when librettist Arrigo Boito proposed an opera combining parts of Shakespeare’s Merry Wives of Windsor and King Henry IV. Composing Falstaff took four years, but the result, one of only two comedies in Verdi’s oeuvre, is a theatrical and musical masterpiece. Brilliant vocal ensembles include a virtuoso final fugue, and orchestral effects ranging from mocking brass assaults to sparking fairyland delicacies.

Sir John Falstaff and his scruffy hangers-on Bardolfo and Pistola have eaten and drunk themselves into penury. But the fat old knight imagines he has enough sexual magnetism to seduce two ladies, then tap into their husbands’ funds. 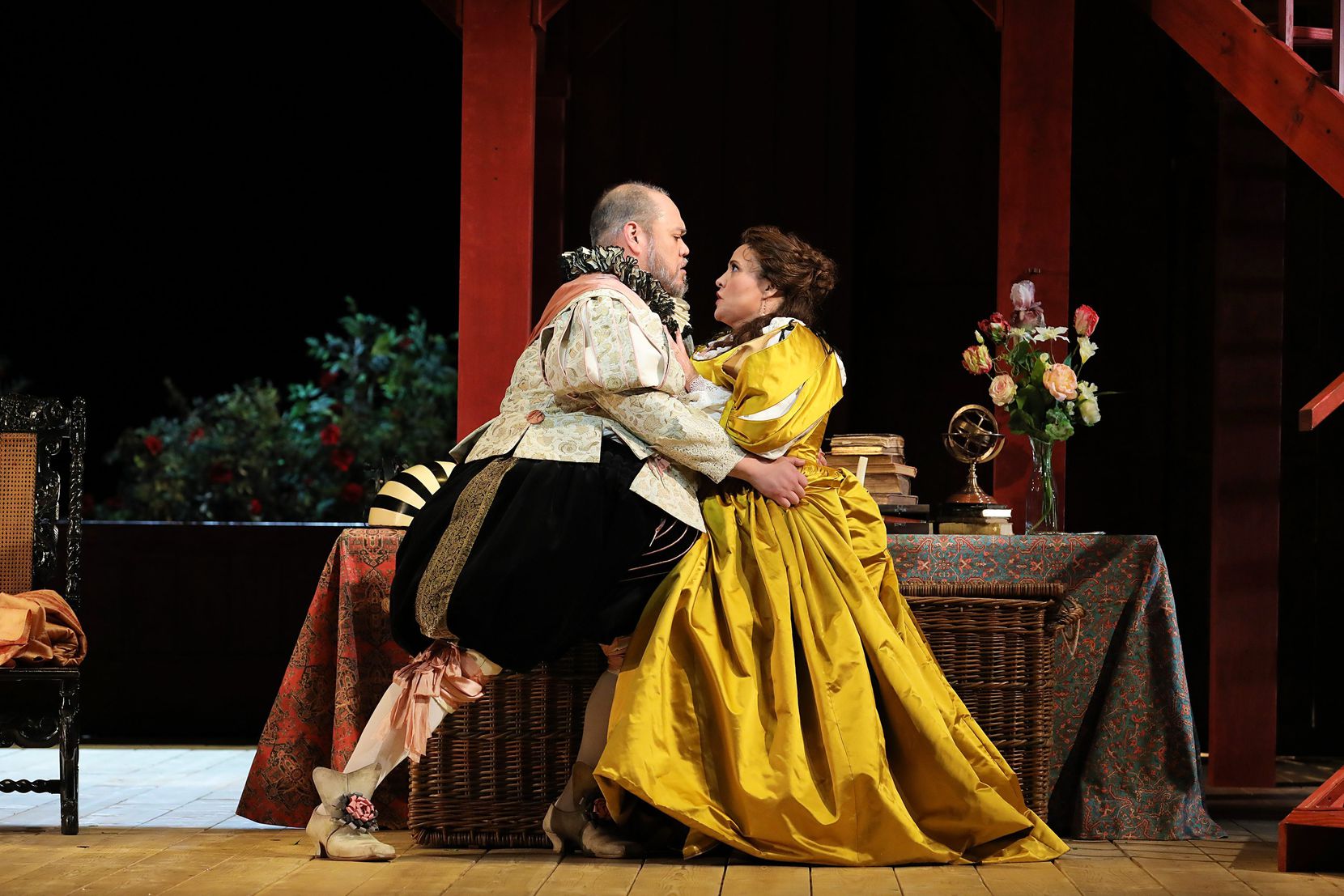 But the ladies, Meg Page and Alice Ford, discover they’ve both received the same letter soliciting an assignment. Together with their co-conspirator Mistress Quickly, they plan what turns into Falstaff’s double humiliation: getting dumped into the river with the laundry and making a fool of himself in disguise as a legendary hunter. Among the opera’s delights is an extensive glossary of Shakespearean insults.

But Sir John finally accepts his well-deserved comeuppance, and all is put to rights in that fugal finale.

I wished for a tenor less keen-toned than Eric Ferring’s ardent Fenton, and Ann McMahon Quintero’s handsome mezzo might have been a little beefier for Quickly. But these were minor quibbles with a cast otherwise first-rate dramatically as well as vocally.

Conductor Paul Daniel had the orchestra playing gloriously July 29, but he paid far less attention to the singers. With little help from him, the tricky ensembles were messier than they should have been.