Her mother told her yes, she could. At the moment she didn’t believe her, Serrano said, but now she knows it’s true.

No one has disputed the fact that it was Serrano’s boyfriend DeAndre Gonzales and not her who killed Daniel Garcia in 2014, her attorney says. But she was tried as an adult and convicted of first-degree murder under the theory that she was an accessory to the killing.

She has since maintained throughout her trial and appeals that Gonzales grabbed the gun out of her hands just before he fired the fatal shot.

When she first started trying to contest her conviction, she was more and more discouraged because of repeated losses in court.

“I just wanted to give up. I didn’t want to no more. For what?” she said in an interview with Source New Mexico on Nov. 12 in a cramped conference room inside the women’s prison in Grants, N.M.

Serrano’s sentencing hearing just over six-and-a-half years ago lasted 19 minutes. The court sentenced her to life in prison with eligibility for parole after 30 years, which she has to serve day-for-day, meaning she won’t get time off for good behavior. According to Serrano’s petition, her trial lawyer presented no evidence or legal arguments in the hearing.

“I just feel like they don’t care,” she said. “They just sentenced me and that’s it. They’ve never asked me my part. Nothing.”

Days before the interview, Serrano said she was working on an assignment from a behavioral therapist about grief and loss. She started getting treatment two years ago after her cousin Kristal Avena died at age 24 in a shooting at a party in 2019.

“She was more like a sister to me,” Serrano said. To this day, she still doesn’t know how to cope with the loss.

“It still messes with me, every day, every night,” she said. “I dream of her and I look OK, but feels like inside, I’m not OK.”

Serrano was convicted of first-degree murder under the theory that she was an accessory to the murder of another Hobbs teenager, Daniel Garcia. She said her cousin’s death really showed her what Garcia’s family went through when he died.

Science on adolescent development identifies 25 as the age when a brain is fully developed, according to the Sentencing Project. Recognizing this, the U.S. Supreme Court has in a series of decisions over the years required judges to consider a young person’s capacity to change and grow in their sentencing decisions.

When Serrano was growing up in Hobbs, she went to the movies and the skating rink a lot with her friends. She attended Booker T. Washington Elementary, then Highland Middle School, then Hobbs High. That was only six or seven years ago.

She was raised Catholic in a big family that would go to church three times a week. She has three siblings and many, many uncles and aunts. She said her family taught her about the importance of manners and respecting elders.

When she was 3 or 4 years old, she remembers her grandfather Manuel Gonzales doing arm exercises, and when she got too close, he accidentally hit her.

“No, you don’t tell that to grandpa,” she remembered her mother, Lupe Serrano, saying. Her mom is a home health care worker.

She started crying because she’d been yelled at, and her grandfather started laughing. He recognized her youth and ability to learn, she said, by responding: “She didn’t know. You need to teach her now, so when she grows up, she knows better.”

A young person’s ability to learn as they age could motivate a change in state law that would have a huge impact on Serrano’s future.

When authorities charged Serrano, she was initially held in county jail but got out on bond pending her trial for about a year-and-a-half. During that time, she said her mother asked her to start going to church again, so she did.

They went to the New Hope Center in Hobbs twice a week. Serrano had drifted away from the church as she got older, she said..

But something about the pastor at the New Hope Center was different.

Leonard Calvillo told her he found God when he did a 10-year bid in prison. He and his wife Nora visited Serrano at her home, she said, and she was surprised to see that he was wearing Cortezes, long socks, Dickies shorts and a jersey.

She looked at him and whispered to her mother, “He’s a pastor?”

She said Calvillo walked up to her and told her, “God wanted me to let you know, the 30 years you got sentenced to, you’re not going to do. You’re going to do some of it, but not how everybody thinks.”

Sometimes she will call Calvillo on the phone, she said, and before the pandemic, he would send her cards in the mail. He taught her that she must stay true to her word, pray and read her Bible.

“There’s days where I do lose hope, but I just gotta pick myself back up and remember there is a God, and he does know my heart, and he’s the last person to say so,” she said. “Just because the judges say ‘no,’ he could do whatever, and I’m getting released. When man says ‘no,’ God says ‘yes.’”

On Nov. 8, her uncle Luis Gonzalez also died. He had been in and out of prison most of her life, but she remembers one year, they drove from her grandfather’s house in Hobbs over the state line to Seminole, Texas, to buy fireworks. They spent an entire night that Fourth of July lighting them.

Gonzalez was a jailhouse lawyer—someone who’s incarcerated and helps other people behind the walls with their legal matters. He helped her petition the court by relaying questions and answers about her case through her mother.

“When he was already dying, he would tell my mom, ‘All I want before I die to see Santana out. I just want to help her out, and then I could die peacefully. I don’t know what I would do if I’m on my deathbed, and she’s still stuck in there,’ ” she said. “That’s one of the things that stays with me.”

Three days before he died, she asked her mother to tell him that she will be out someday, and that he just needed to take care of himself in the meantime.

Serrano said what she misses most about the outside is her mother, her niece and her family.

Her niece is 6 years old, growing up without her mother, who died when she was 4. From when she was 3 months to 18 months old, Serrano took care of her.

“I was the closest thing she had,” Serrano said.

When the little girl would come to visit Serrano in prison, “she would hold on to my neck or to my foot and say ‘Please come with us. Please let me stay with you.’ And it would just break my heart.”

They talk every day on the phone, and she tells Serrano that her mother is in heaven and she will never see her again.

Asking for a second chance

Serrano, if given the chance to speak to Gov. Michelle Lujan Grisham, said she would ask for a second chance. She said being in prison is a life-changing experience.

“I think I’ve been rehabilitated,” she said. She is working on the assignments given to her by her behavioral therapist and said she has learned a lot about herself just being inside.

“My whole sight on life is different. I was a kid then, and I’ve grown up since then, and now I know what’s really worth it and what’s not … I want to do better.”

She said she wants to get out and talk to young people to say it’s not worth being in the streets or carrying guns because it will either get them killed or imprisoned.

“You don’t want either,” she said. “Prison is not cool. You have to be told when to eat, when to sleep, when to shower.”

She wants a second chance at her life to help other young people change their own.

“I want to give my testimony, my story, to them, so they could know this is what could happen, and this is what you don’t want — just to give them a chance as well.” 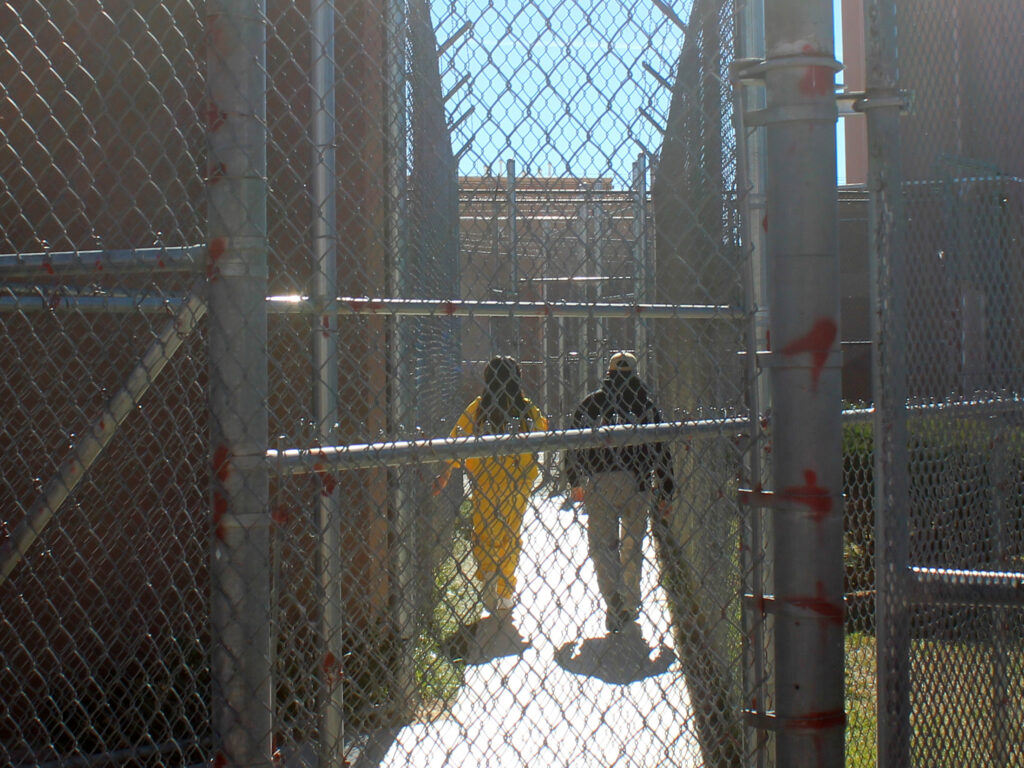 A prison guard escorts Santana Serrano back to her cell on Nov. 12 at Western New Mexico Correctional Facility in Grants. (Photo by Austin Fisher / Source NM)

It Takes a Team: A Doctor With Terminal Cancer Relies on a Close-Knit Group in Her…