Grasses sprout in fresh burn scars as residents get their bearings

MONTE APLANADO, N.M. – John Trujillo has his morning coffee in a kitchen with a window facing a burnt mountain peak less than a mile away. It’s a daily reminder of the ongoing destruction caused by the Hermits Peak-Calf Canyon fire.

He stayed home when the wildfire kicked up in April, quickly becoming the largest in the state’s recorded history, in part due to dry conditions and high winds, forcing mandatory evacuation orders to residents in the valley he loves. He stayed on May 1, when the fire crossed the mountain range that lines his backyard, igniting spot burns that destroyed his sister’s house and property inches away from the kitchen window where he sips his morning coffee.

About that night. Winds pushed the fire down into the valley, jumping NM Highway 518, spreading north, south and northwest toward Sipapu. The ridge on the highway into the higher elevation towards Taos is now outlined in skinny, burned trees. Tiny smacks of bright green are speckled into the view, new sprouts of vegetation in piles of ash along the fresh burn scar.

John Trujillo stands in front of his sister’s house that burned down in early May. He watched the fire climb the mountain ridge behind him. (Photo by Shaun Griswold / Source NM)

Even on Trujillo’s property down in the valley, grass is starting to grow.

But back to May 1. One thing Trujillo, an experienced wildland firefighter, wants to make clear is that he was in no way obstructing fire crews that arrived to put out spot burns. “I knew not to be in their way because I did fight fires.”

But once they left to put out more spot burns in other areas, he saw winds picking up and spreading embers to other parts of his home. He noticed a truck parked next to his garage turning red from the heat. A pile of wood meant to heat his home caught fire, and his sister’s home was still burning.

Trujillo told his wife to stay in their truck and be ready to leave. “We knew we were in trouble,” he said. “I was worried for her because she was never in a situation like this. She would keep getting down so I had to yell at her to stay in the truck so I wouldn’t have to be looking for her and fighting the fire. I knew she was safe.”

And that’s how it went for the next 12 hours. Trujillo built a containment line and put out flames whenever they seemed to jump off from the wind. “First behind the house, making sure everything was out.”

By morning, he successfully saved his home and his daughter’s home nearby. His sister’s house was totally demolished.

“My daughter and her kids live in the trailer. And me and my wife and my son live here,” he said from his back porch. “Generations.”

That family line is what keeps Trujillo home. Cleaning up from the fire is one thing. Prepping for potential floods is another reason his family wants to stay close to home. “We always get flooding in that valley,” Trujillo’s daughter says, pointing to an area a few yards south of her home. “So if it hits hard, it will probably be worse this time.”

Trujillo is committed to rebuilding, even though the experience of surviving the fires is taking a toll on his mental health.

He said there is a lot of work. His list includes fixing the plumbing, hauling the metal scrap from his sister’s house, figuring out if he can salvage any of his classic vehicles, cleaning his freezer from the smell of meat that rotted when the power was shut off, maintenance on his generator and so on.

However, he’s finding himself struggling to get his day going at times.

Talking about his experience is helpful, he said, and he is finding conversation with friends and family reminiscing about places that are lost or how the forest is never going to be full again in their lifetimes. 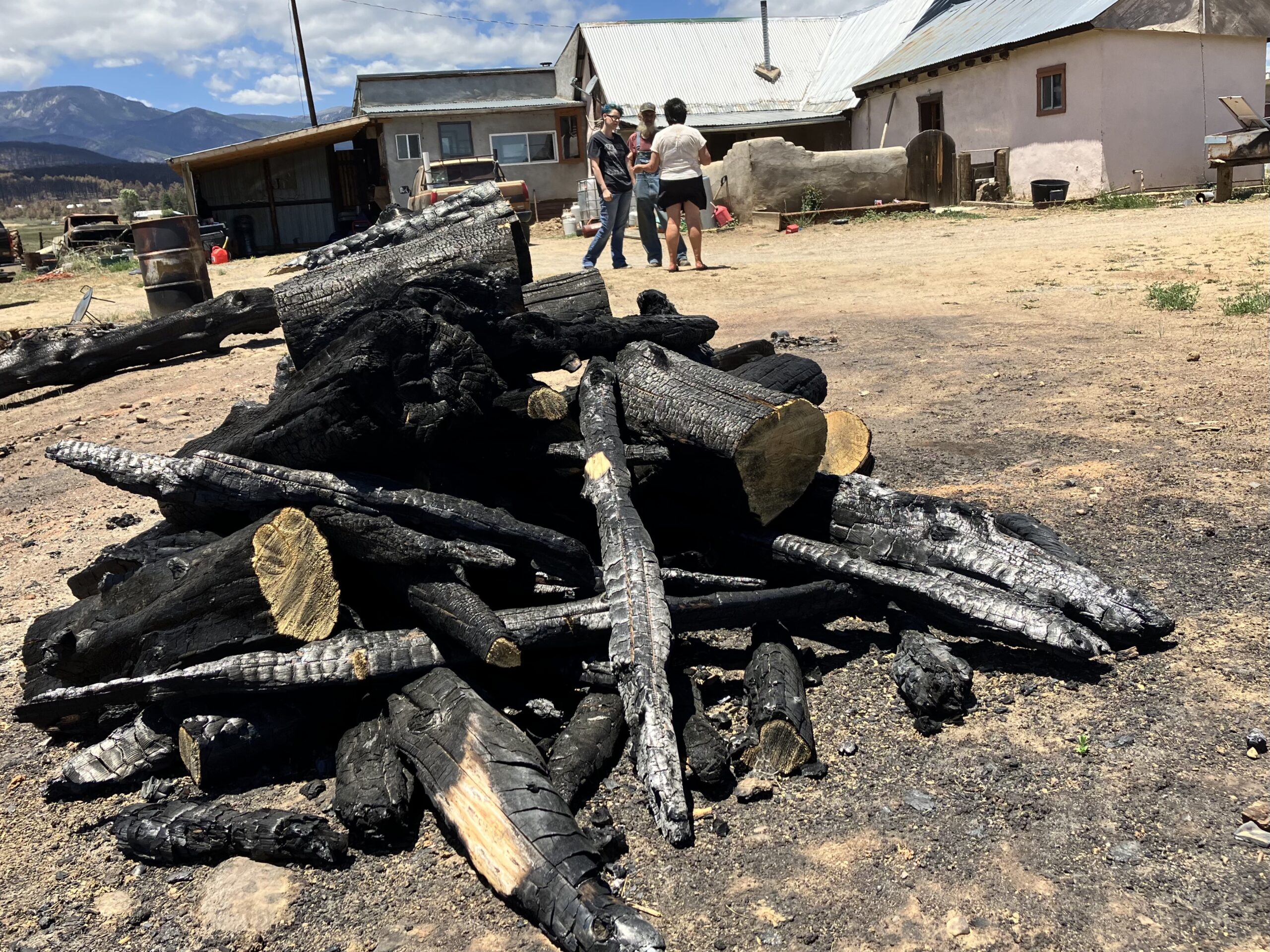 John Trujillo catches up with his daughter and neighbor outside his home in Mora County. The wood pile in the foreground caught fire — a spot burn he put out. (Photo by Shaun Griswold / Source NM)

He brought up a recent visit to a neighbor’s property where his friend’s dad lost their home. His connection to the house was from memories hanging out there as a kid and then on into adulthood.

“We hung out in that same house. It’s probably more sad for them, but after I talked to him, it made me think ‘Yes, of course I was there,’ ” he said. “You know what I mean? As a child.”

Trujillo brings it back to the rebuild, and in particular, the reforestation of his beloved mountains.

He said he spent three months after the Cerro Grande Fire burned in Los Alamos on the forest restoration team, planting seeds and clearing burned trees. He questions why that isn’t widespread in Mora.

“You gotta start now. It’s going to take 10 to 15 years to even start seeing any vegetation,” he said. “They spent millions of dollars in Los Alamos doing forest rehab. I was there. It could be work for people. It’s not that hard to learn.”

Whatever vegetation is growing will only help mitigate the potential floods whenever monsoon season hits the community.

On the Trujillo property, standing before a charred mountain, is a single line of trees that did not entirely burn. It’ll be a slim line of defense when the rains begin.

Trujillo pauses and thinks of his neighbor. “I’m scared for them down here. They’re at the lowest point. We’ll have some protection a little bit. But still, how quickly we get a lot of rain, we could get flooded.”

Behind the nearest ridge are even higher peaks with more scorched forest.

“A lot of that stuff that burned up there in the highest peaks,” he said, “is going to come down here.”

NM demonstrators look for next steps in preserving abortion rights